An ancient city (founded in the 2nd century BCE as Roman Tolosa) nestled in the south of France’s Occitanie region between the Garonne River and the Canal du Midi, Toulouse is best known these days for aviation – as the home of the European aerospace consortium Airbus (maker of our own fleet’s aircraft) – as well as its coral-hued, clay-brick façades, leading to its nickname “La Ville Rose”. From grand architecture and majestic squares to open-air markets and centuries-old churches to a marinade of historical and modern museums and attractions, there’s the proverbial something for all tastes and interests in the country’s fourth-largest metro area (pop. 1.4 million, of which some 969,000 live in the city per se).

Toulouse’s storied main square, Place du Capitole, houses the magnificent neoclassical city hall, the eponymous Capitole (top). Behind its embellished 18th-century façade, lies highlights such as the Théâtre du Capitole, among France’s most renowned opera houses, and the Salle des Illustres (Hall of the Illustrious), which immortalises the municipal history through a collection of 19th-century art.

With its origins in the 1100s, the expansive place includes pavement artwork depicting the twelve signs of the zodiac, colourful outdoor markets, and the bustle of Toulousiens rendezvousing at parasol-topped eateries. Exit from the south corner to explore the city’s Vieux Quartier (Old Quarter), a labyrinth of pathways and green squares sprinkled with cafés, restaurants, and shops. 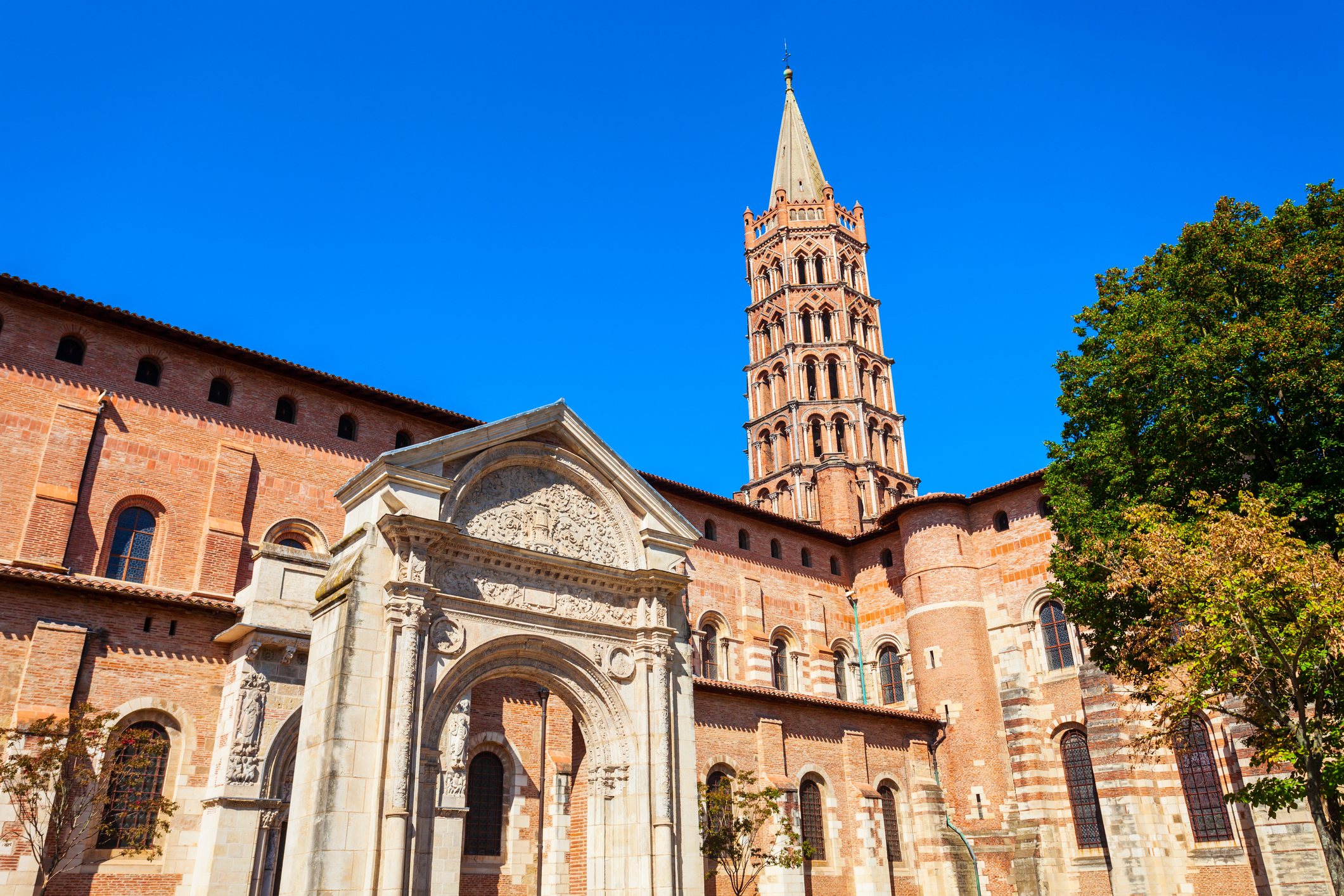 The Basilique Saint-Sernin, a Romanesque Masterpiece

Named after the city’s first bishop, the 3rd-century “missionary to the Gauls” whose remains lie within its walls, this Romanesque basilica — the largest surviving building of its kind in Europe — was completed in 1120. It features a five-tier belltower, intricate façade carvings, an ambulatory peppered with marble statues, and a suitably creepy crypt. Aside from the tomb of St. Sernin (aka St. Saturnin), visitors can view religious artifacts, ceremonial pieces and vaults housing the mummified bones and relics of other martyred saints. 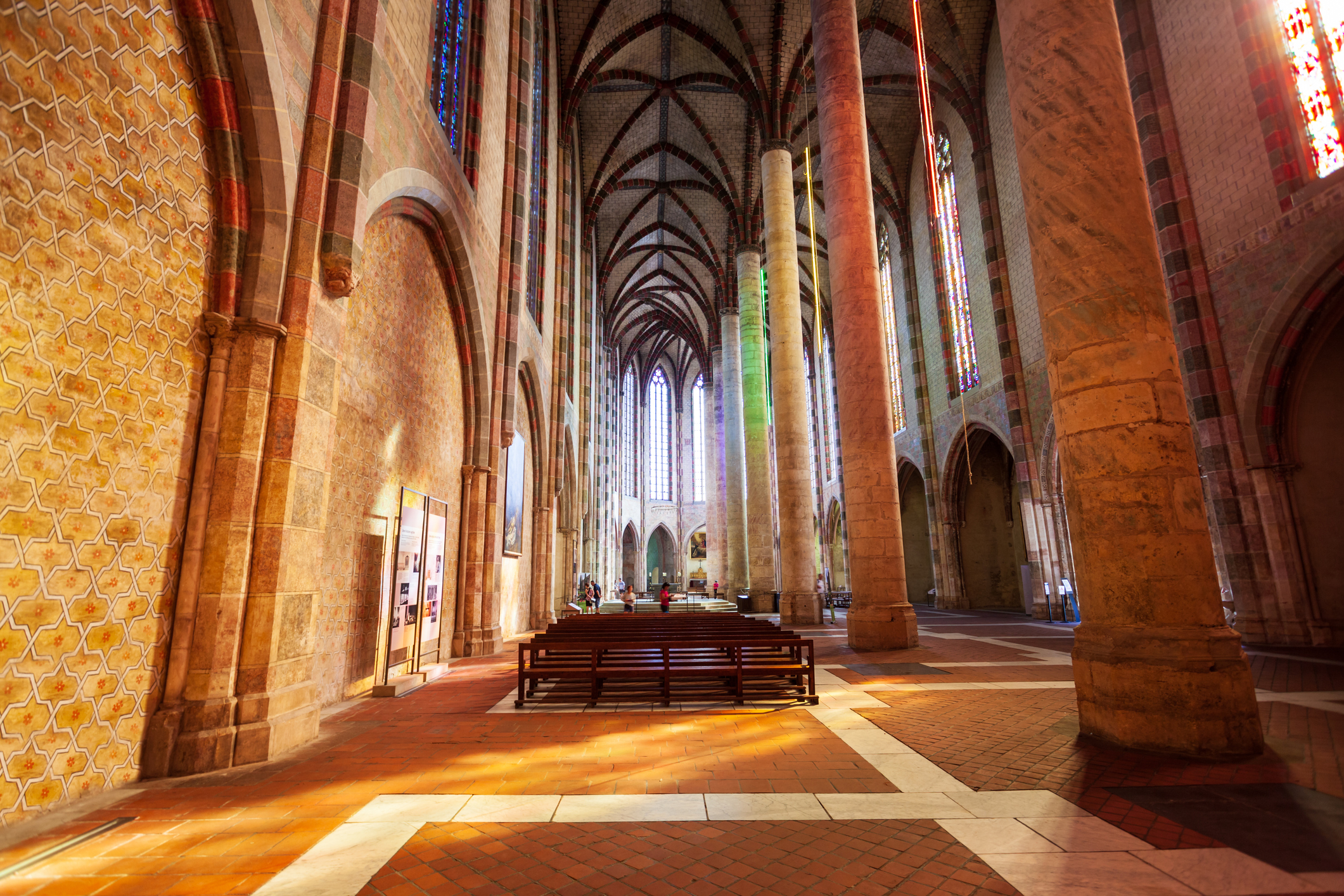 Built between the 13th and 14th centuries, the stately Église des Jacobins was the Dominican order’s first church. Adorned with intricate stained-glass windows and a vaulted ceiling, areas of note include the galleries of the Cloître des Jacobins with its brick columns and verdant courtyard, the Palm Tree vault, and the ceiling frescoes of Saint Antonin Chapel, along with an altar housing the remains of Thomas Aquinas, the renowned 13th-century Italian philosopher and honoured member of the order. 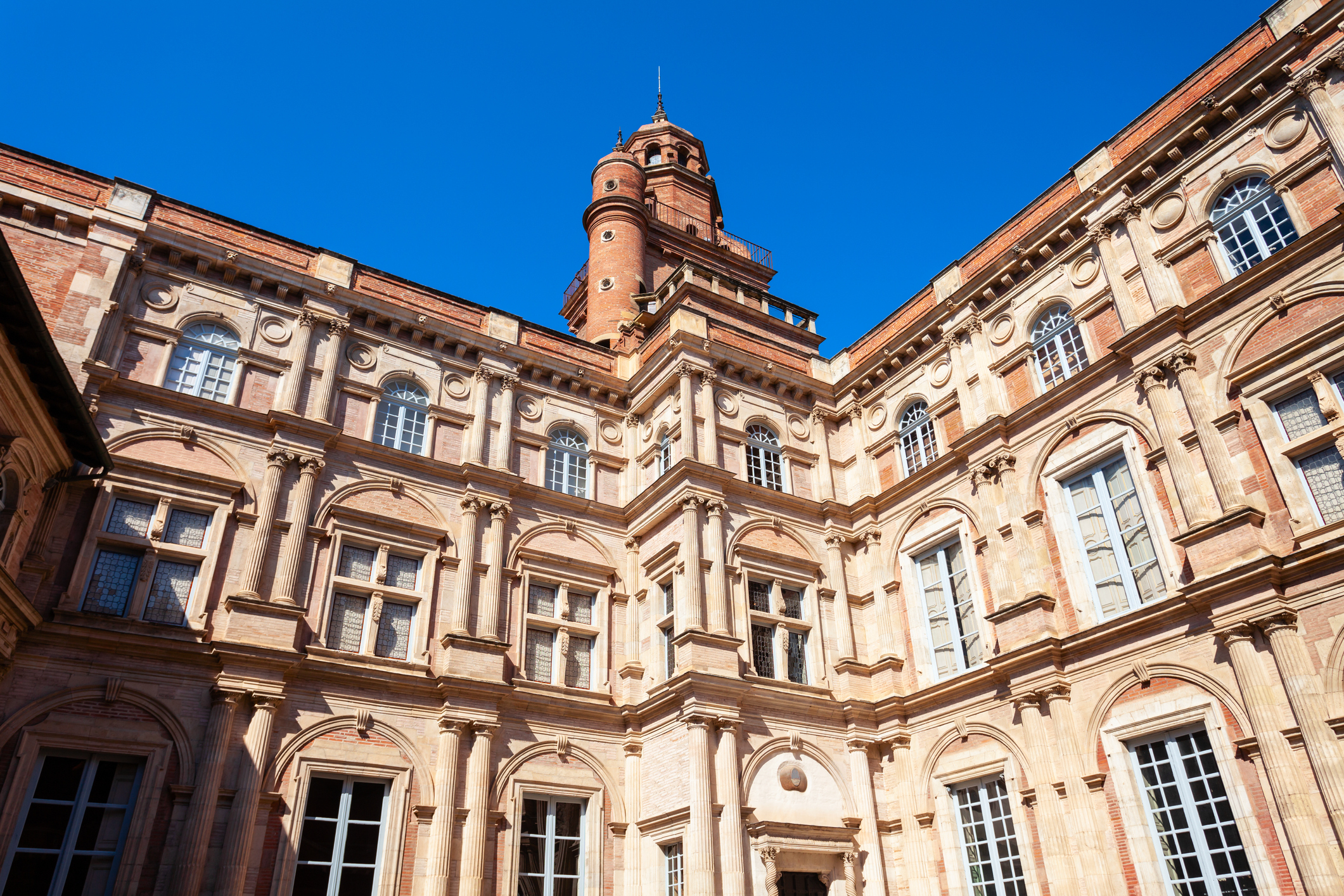 A Golden Age of Renaissance Manses

Due to the success of trading pastels (dyes) from the mid-15th to mid-16th century, merchants demonstrated their burgeoning wealth by commissioning ornate, sometimes palatial hôtels particuliers (townhouses) around the city centre. Aristocrats and the upper class soon followed suit,  resulting in opulent architectural marvels – many of which today are privately owned residences.

A few palaces worth a wander are the Hôtel Dumay, the elegant home of the personal physician of King Henry IV‘s first wife, Queen Margot (and now home to the Museum of Old Toulouse; see below) and the famed Hôtel d’Assézat (above), a Renaissance beauty boasting an opulent courtyard and the art-filled Bemberg Foundation (currently closed for renovation till early 2022).

Other notables include the Hôtel Jean de Bagis, celebrated for its unconventional stone façade, and the stunning Hôtel du Vieux Raisin, featuring elaborate motifs inspired by the Fontainebleau Palace near Paris as well as the art and architecture of the Italian Renaissance. 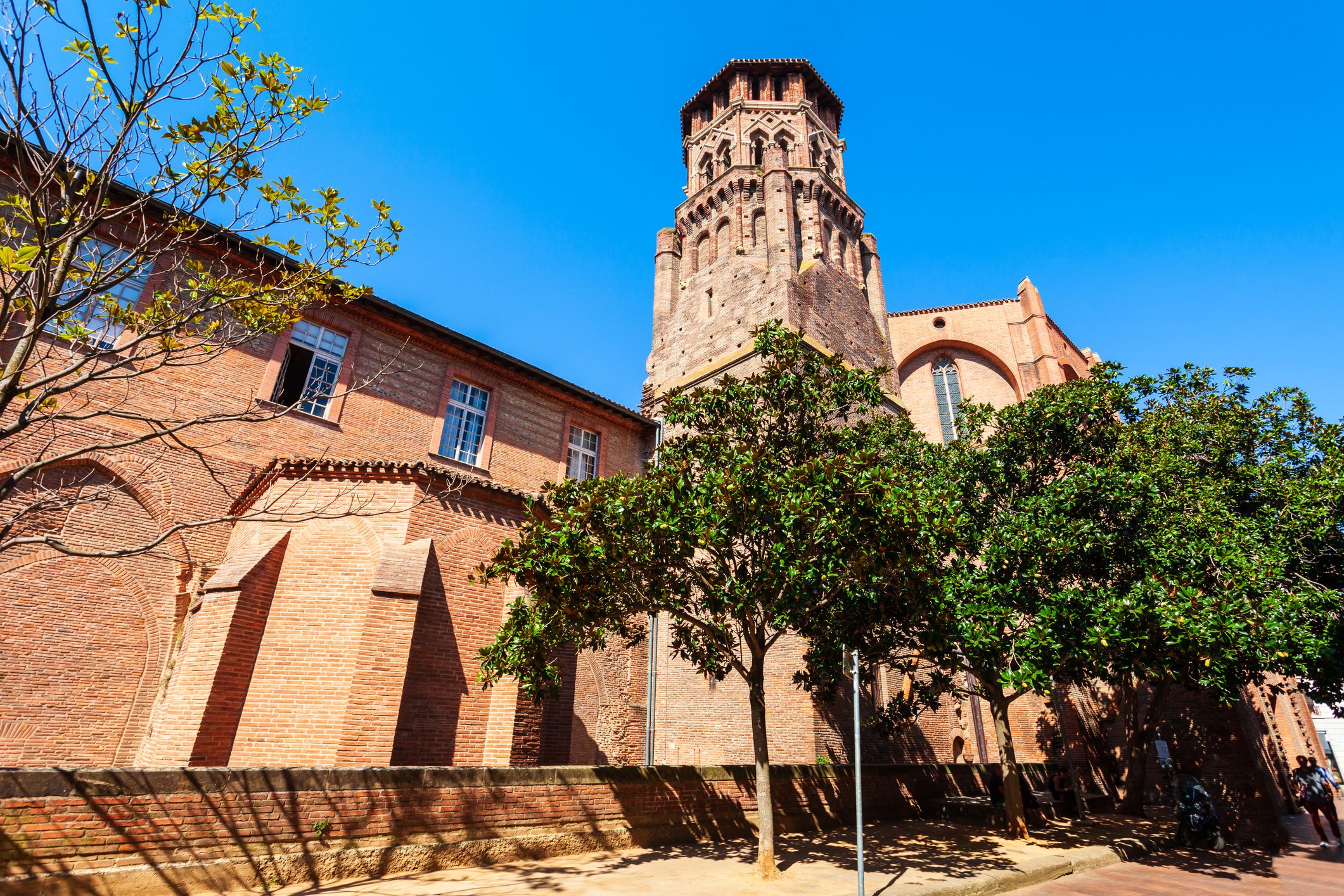 A Multitude of Museums

From ancient art to scientific discoveries to the simply bizarre, Toulouse’s abundance of museums offers visitors plenty of options to learn about its past, present and future through a multi-generational lens. Categorised by subject, here are but a few of the many superlative cultural attractions on offer.

Situated inside a onetime Augustinian monastery, the Musée des Augustins (above) — one of the oldest in France — spotlights fine art from the Middle Ages through the early 20th century (though at the moment it’s closed, getting work done till 2023). Whilst the menacing gargoyles statues entertain architecture buffs in the 14th-century cloister gardens, works from the likes of Delacroix, Monet, and Toulouse-Lautrec are among the standout artists from later centuries.

Round off your arty immersion with a visit to Les Abattoirs, a slaughterhouse-turned-museum featuring over 4,000 mostly modern/contemporary works; the Musée Paul Dupuy‘s vast collection of decorative arts, clocks/watches, and other items; and Le Château d’Eau, a 19th-century water tower converted into a contemporary photography centre. 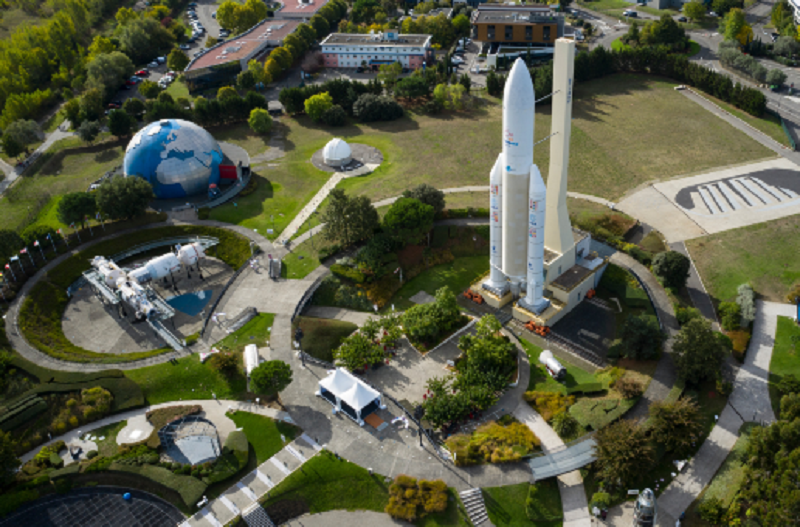 A bit away from the historic centre, the Cité de l’Éspace showcases space-exploration history through fun interactive exhibits and activities. The most popular include a space travel tolerance test, a moonwalking simulator, and a cinematic space mission. Complete your experience exploring actual famous spacecraft such as a Soyuz habitat as well as a visit to the planetarium.

Aviation geeks will enjoy the AviaSim centre for a simulator flight in a realistic-looking Airbus A320 cockpit; an Airbus factory tour; the exhibition of restored aircraft at Ailes Anciennes; the fascinating history of France’s Aéropostale mail-delivery planes at L’Envol des Pionniers; and the fantastic, Airbus-sponsored Aeroscopia museum’s flying machines from every era.

Also the Muséum de Toulouse houses an impressive collection of natural-history exhibits ranging from dinosaur skeletons to the solar system to the past and future of humankind. Make your visit complete with a stop at the science labs and botanical gardens.

For head-turning archaeological displays dating back to Roman times, check out the attrahenti Musée Saint-Raymond, and for a trip through the ages, take a stroll through Musée du Vieux-Toulouse‘s 18th-century salon-inspired rooms exhibiting items from the city’s past life and times.

Housed in a Moorish-style villa, the Musée Georges-Labit is a collectors’ paradise of eclectic treasures amassed during its 19th-century namesake’s travels. Though Monsieur Labit collected mostly Egyptian (don’t miss the mummy!) and Far-Eastern pieces, the gardens also boast an abundance of flora from around the world.

The Musée Postal des Anciens Ambulants is also worth mentioning for its quirky collection of old postal railway wagons, vintage mailboxes, and mail-carrier bags – as is the Musée du Compagnonnage, in the quirky old headquarters of the artisan carpenters guild, for its eye-popping displays of woodworking and ironwork.

Whew, how’s that for a place packed with cool stuff to do? So if you’re looking for a cool place to deepen your experience of France after Paris and other top-tier destinations, book an Iberia flight to the Pink City – after all, what’ve you got “to lose”? (😉; cue groan).

And for more info, check out Toulouse-Visit.com.