The bel paese offers a seemingly inexhaustible supply of bellissimi destinations and experiences, from history and culture stretching back millennia to epic eating to cutting-edge fashion to amazing beaches and spectacular mountains and lakes. And here at Iberia we’re pleased to say that we’ve got Italy pretty well covered, with five major gateways that besides being fascinating destinations in their own right serve as great jumping-off points for visiting a huge host of others. So here’s a rundown of Iberia’s Italy – enjoy!

Italy’s 15th-century Renaissance glory is on full display in Tuscany’s capital (top), with its historic core centred around the Piazza del Duomo, site of three buildings that in many ways represent the apotheosis of the Renaissance architecturally. First is the eponymous Duomo – aka Santa Maria del Fiore – the great cathedral especially famous for its red, ribbed dome (well worth climbing the 463 steps to the top to fully appreciate the cityscape in all its glory more than 110 metres (360 feet) up, including its marble accents, reddish roofs, and iconic Ponte Vecchio bridge over the Arno River. And don’t miss a pair of other splendid Firenze landmarks nearby, the Giotto belltower and the St. John Baptistry.

A short stroll away, another spellbinding plaza, the Piazza della Signoria, is the seat not of religious but civic power since the Middle Ages. Here is the distinctive red-brick Palazzo Vecchio and one of the world’s most important art museums, the Uffizi Gallery, home to many of the seminal works of many of the seminal artists of the Renaissance (some northern European as well as Italian).

Florence is the place which in the 19th century famously gave rise to so-called “Stendhal syndrome”, a psychosomatic condition involving rapid heartbeat, confusion, fainting, and even hallucinations, brought on, it’s said, by exposure to objects, artworks, or phenomena of great beauty and antiquity. So visit at your own peril! 😉 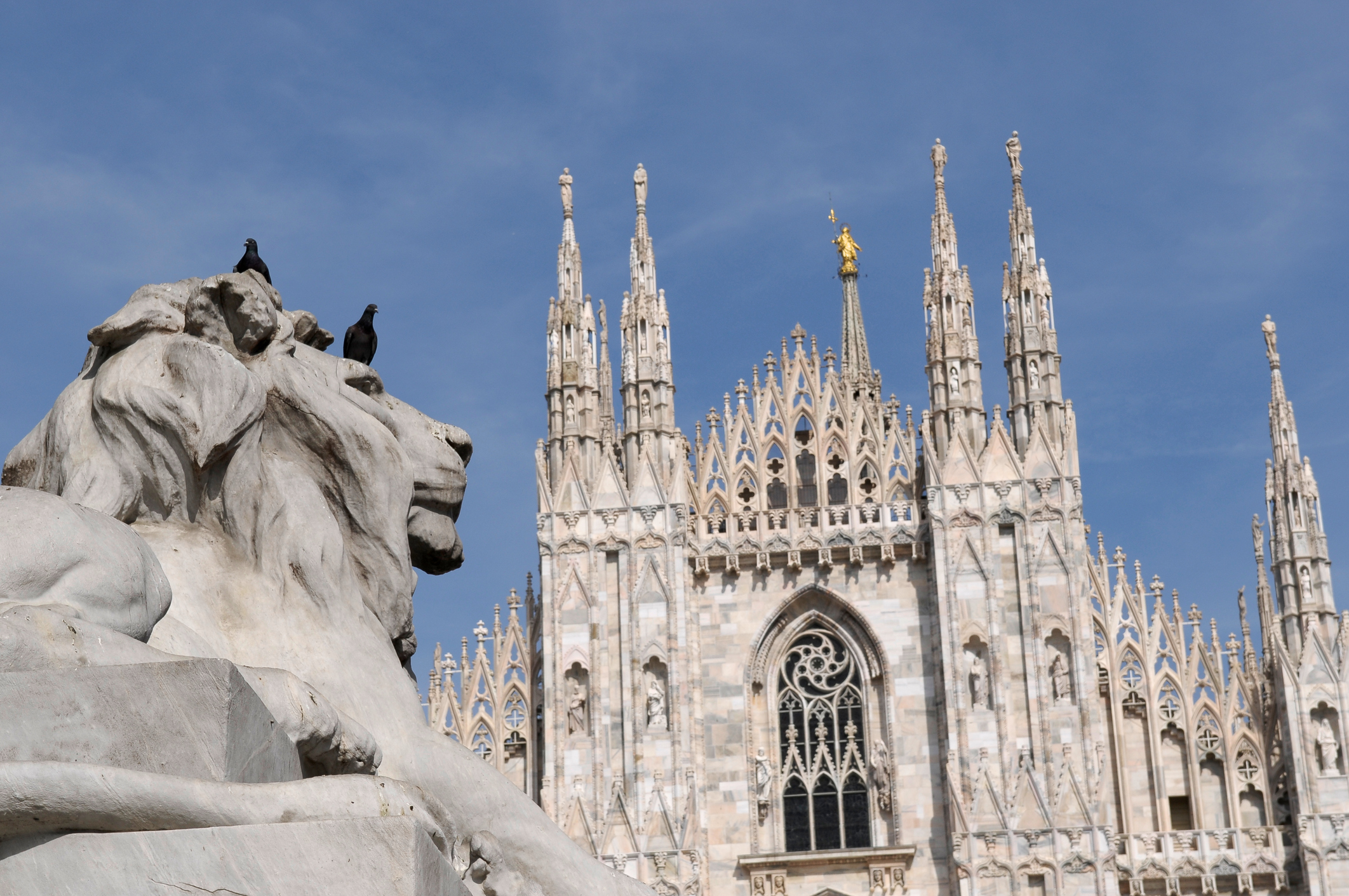 Rome may be Italy’s governmental and monumental capital, but this northern powerhouse is of course its commercial capital, where much of Italy’s business and finance is conducted. One of Milano’s most famous businesses, of course, is la moda, which makes it not just a national but an international capital of fashion, its seasonal shows a glamorous must for buyers and serious fashionistas.

You can see this in its residents, usually dressed to the nines in its downtown Vittorio Emmanuele Gallery as well as the Quadrilatero d’Oro (Golden Rectangle) drawn by the streets Via Sant’Andrea, Via della Spiga, Via Montenapoleone, and Via Manzoni, crammed with the stars of haute couture, especially Italian but also international – Chanel, Dior, Dolce & Gabana, Ferragamo, Kenzo, Valentino, Versace, and so on.

And even if you’re not a fashionista, there’s plenty here to ring your bell, from hundreds of restaurants (including some of the country’s finest) to iconic monuments and artworks that should definitely be on your bucket list. Topping the list, of course, is the spectacular Duomo (above), the world’s largest Gothic cathedral, built over the course of centuries beginning in 1386. Visitors shouldn’t miss a trip up to the roof (don’t worry, there’s an elevator, if you must), with its sculpture, spires, and a view of surrounding streets and the square below in constant motion.

Other musts include the Pinacoteca di Brera, one of Italy’s most important venues for Italian and other European old masters; the church of Santa Maria delle Grazie, whose refectory is home to Leonardo da Vinci’s reknowned Last Supper; La Scala theatre, the world’s premier temple of opera; the 14th-century Castello Sforzesco, citadel of the longtime ruling Sforza dynasty and now the site of a number of other interesting museums; and atmospheric (and newly hip) neighbourhoods such as Brera and canal-crossed Navigli. 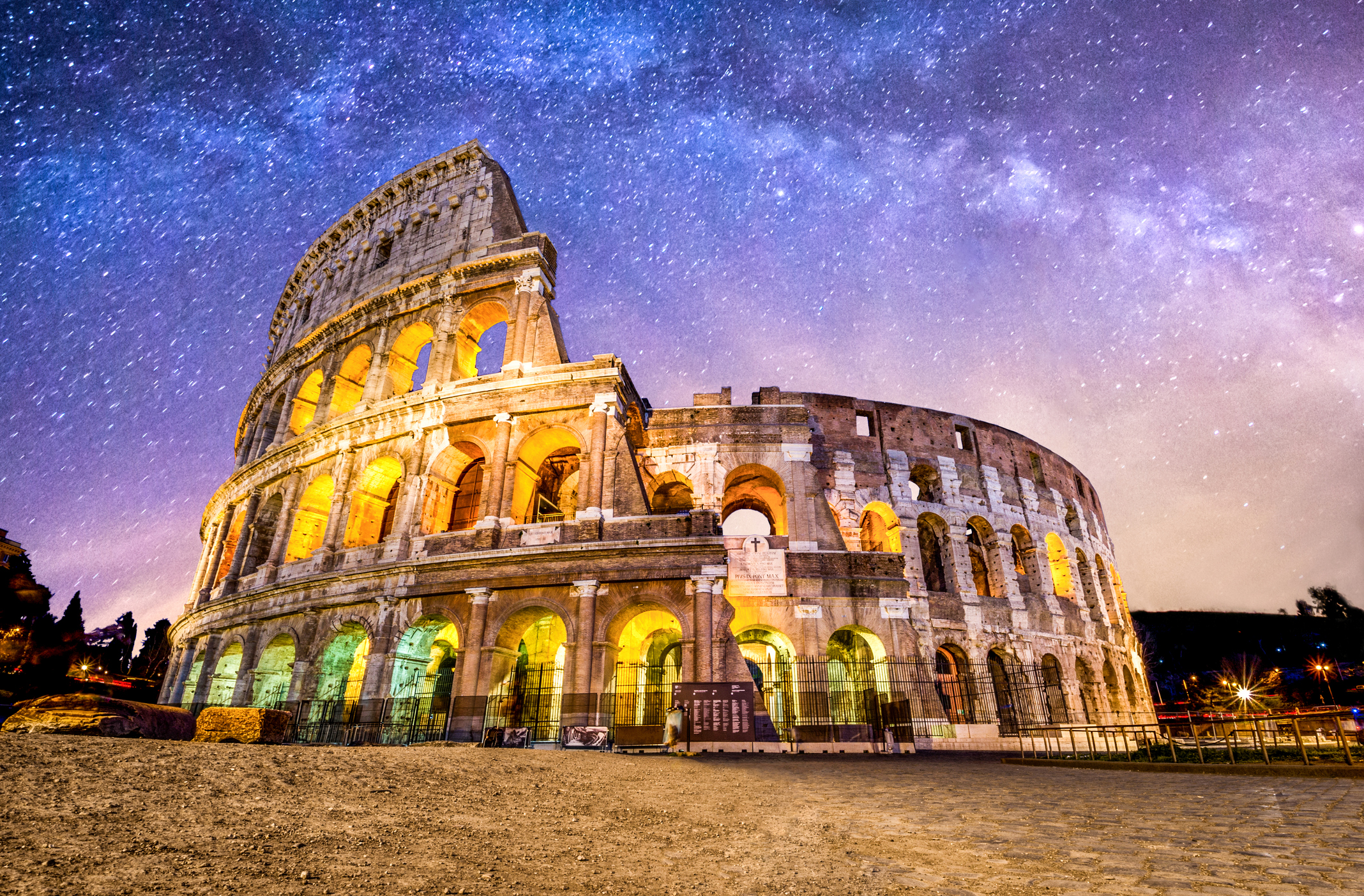 Ah, the sometimes chaotic but always mesmerising  Città Eterna (Eternal City), so called because its sometimes tumultuous history stretches back nearly 3,000 years. You could visit Italy’s capital time and time again and still not exhaust its sights and experiences, including some of the world’s absolutely most iconic.

There’s classical Rome, with the imposing Colisseum and nearby Roman Forum and Palatine Hill; the Baths of Caracalla; the Pantheon; and the Capitoline Museum, housing a staggering wealth of archaeological and artistic treasures dating back to those ancient times.

There’s also Baroque/Renaissance Rome, with highlights such as the Piazza Navona; the Trevi Fountain just a coin’s throw away; the Villa Borghese with its sumptuous art collection; the Spanish Steps; the Castel Sant’Angelo (actually a classical/Renaissance hybrid, starting out as an imperial tomb and fortress, then ending up as a papal prison and also fortress); and most of athe ll the Vatican, from the soaring, over-the-top interior of St. Peter’s Basilica to crazy cavalcade of artistic wealth in the Vatican Museums (including the legendary Sistine Chapel).

And in between the two of them, the medieval also makes an appearance along the cobbled lanes of romantic Trastevere. No matter in which era you tarry, it’s all meraviglioso! 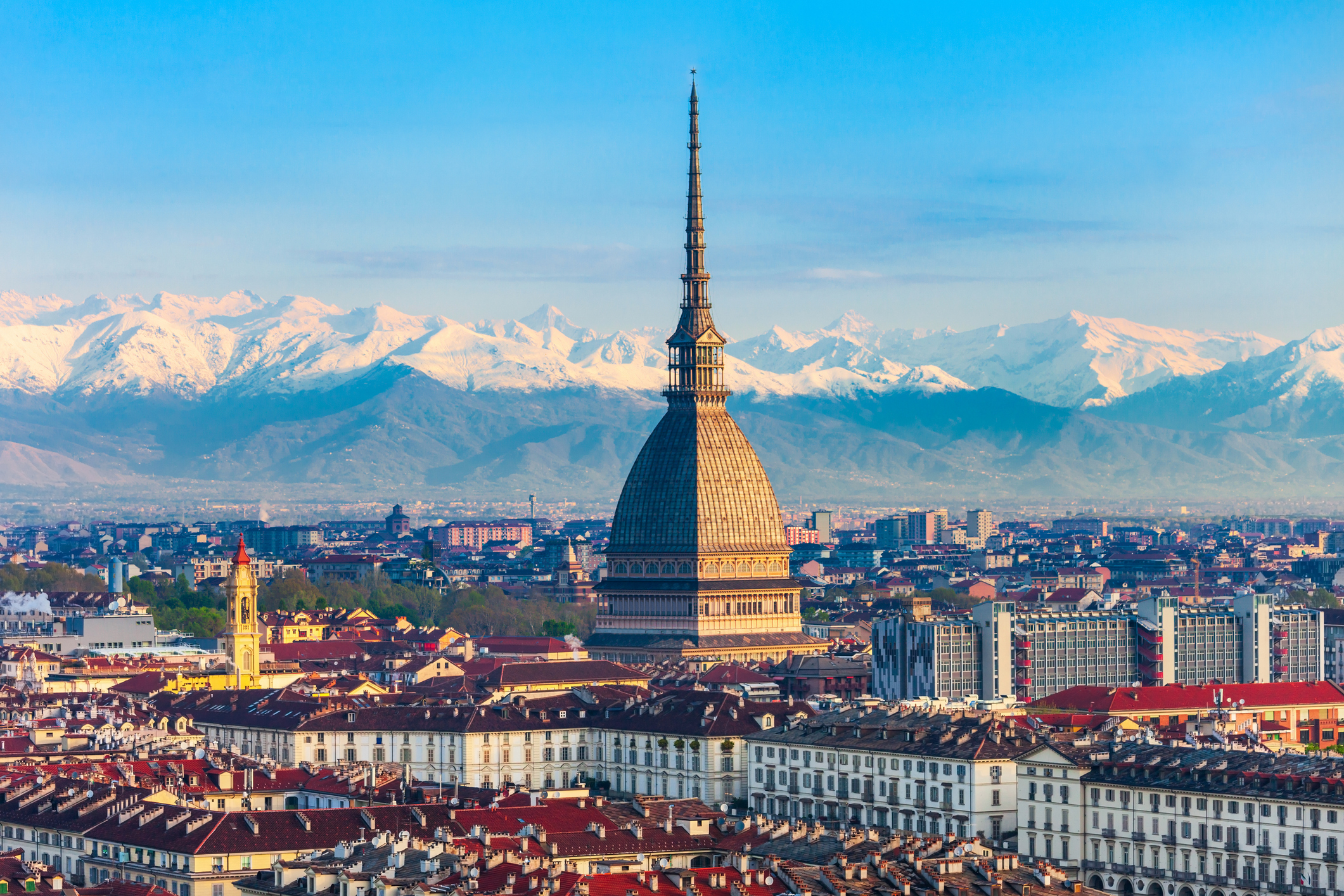 Up near France at the foot of the Alps, the capital of the Piedmont region is handsome, classy, wealthy, bon vivant, and can boast plenty of marvelous sights, landmarks, and culture. And yet despite some amount of international exposure – as the home of the Shroud of Turin, for example and host of the the 2006 Winter Olympics – this city of just under a million inhabitants on the Po River remains delightfully free of tourist hordes.

Called Torino in Italian but in local Piemontese dialect also “Turin”, it’s known especially for its fine architecture – most notably Baroque, Renaissance, neoclassical, and Art Nouveau (here called “Liberty”), as well as the sleek contemporary of the city’s postwar industrial powerhouse era, as home to icons such as Fiat and Juventus football club.

The city’s heart is the Piazza Castello, site of the 16th-century Royal Palace and 17th-century Palazzo Madama; just behind it is the 15th-century Gothic Turin Cathedral, where a Baroque chapel is home to the Shroud of Turin the length of linen said to bear the original image of the suffering Jesus Christ (though expert consensus is that the cloth was concocted in the Middle Ages, that naturally hasn’t deterred many of the faithful, and between believers and gawkers, the chapel is often jammed). A few steps away you’ll find the Royal Gardens. It was throughout all these august precincts, too, that personages such as Giuseppe Garibaldi made their mark in the 19th-century Risorgimento and unification of Italy under the locally-based House of Savoy (which is why Turin became Italy’s first capital, 1861-64).

Turin is well known for its atmospheric caffès, such as the 18th-century Al Bicerin, where the likes of legendary French author Alexandre Dumas came to take their bicerin (coffee with chocolate and whipped cream); Platti, where numerous other writers came and wrote; and the San Carlo, where you’ll see some historical memorabilia from the Risorgimento, the 19th-century period of Italy’s unification.

There are several very worthwhile museums here, too – especially don’t miss the National Cinema Museum, the Egyptian Museum (the world’s second most important outside Cairo), and the National Museum of the Risorgimento! 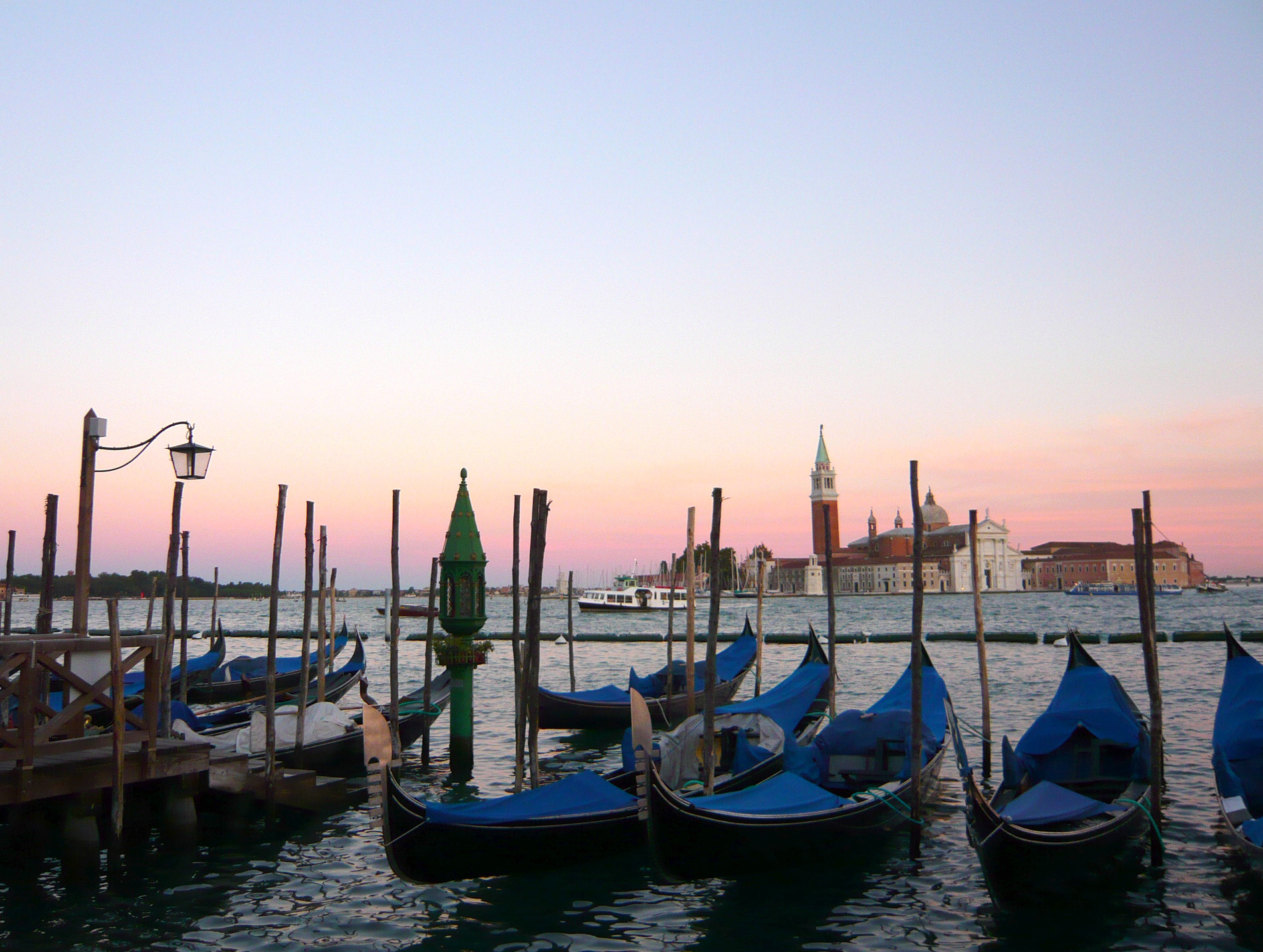 Perhaps no place in Italy is more special – and positively cinematic in its beauty – than La Serenissima, particularly car-free, UNESCO-World-Heritage historic centre with its canals, its singular Venetian Gothic architecture, and its traditions, such as winter Carnevale.

Ground zero is of course the Piazza San Marco, home to stupendous St. Mark’s Basilica (dating in its current from the 11th century) and next door the mystical Gothic Doge’s Palace, its flocks of pigeons, and its caffès, which pricey though they may be are a must, to sit a while and soak up the magic atmosphere.

Of the aforementioned canals, the Canale Grande is the largest, nearly four kilometres/2⅓ miles long and ranging from 30 to 90 metres/98-295 feet wide), as well most important. It’s lined with the grandiose palazzi and other structures (including the Basilica of Santa Maria della Salute and the Peggy Guggenheim Collection of modern art).

The bridges of Venice are also a unique part of its appeal, most notably its oldest (and arguably most beautiful), dating back to 1173 and built in its current form in 1591. Connecting the districts of San Marco and San Polo, the Ponte Rialto has of course become a central icon of Venice due to its silhouette – two covered, ramped sections connected by a central portico. It’s lined inside with small shops selling a variety of stuff, from jewelry to high-end, tourist-oriented merchandise such as Carnevale masks.

You should also hop a vaporetto (water bus) to explore several of the smaller islands out in the Venetian Lagoon, including Lido, long been a seaside and spa resort, with one town, one village, a good deal of Liberty (what Italians call Art Nouveau) architecture, grand hotels (many less pricey than most in the historic centre, by the way), many good restaurants, and kilometres of beaches (even including dunes!); it’s also famous for hosting September’s Venice International Film Festival. More laid back spots to explore out here include Burano, Murano, and Torcello. Buranois known for its lace work and colourfully painted houses; Murano for its colourful, artisanally blown glass; and Torcello the impressive 7th-century Cathedral of Santa Maria dell’Assunto, with fabulous Byzantine mosaics, and 15th-century Ponte del Diavolo (Devil’s Bridge), very typical of traditional Venice, with no side railings.

Mamma mia, so much to choose from! Where will your next holiday in Italy be?