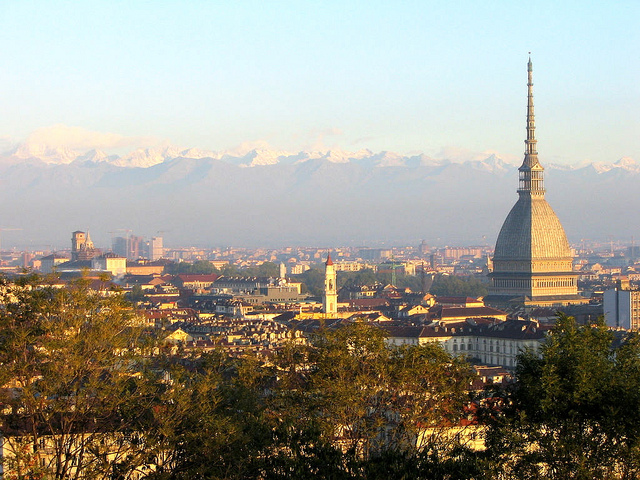 Here near France at the foot of the Alps, the capital of Piedmont is handsome, classy, wealthy, bon vivant, and has plenty of marvelous sights and landmarks. And yet despite some amount of international exposure – as the home of the Shroud of Turin, for example (more about that below) and host of the the 2006 Winter Olympics – this city of just under a million inhabitants on the Po River remains delightfully free of tourist hordes. Turin (called Torino in Italian but in local Piemontese dialect also “Turin”), is a city known for among other things its fine architecture – most notably Baroque, Renaissance, neoclassical, and Art Nouveau (here called “Liberty”), as well as the sleek contemporary of the city’s postwar industrial powerhouse era, as home to manufacturing and corporate icons such as Fiat. (it’s also something of a sporting power, home to the Juventus football club). 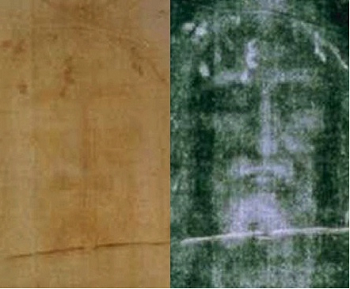 The heart of Turin the the Piazza Castello, site of the 16th-century Royal Palace, of the House of Savoy, as well as a 17th-century royal palace, the Palazzo Madama; just behind it is the 15th-century Gothic Turin Cathedral, with a Baroque chapel by Guarino Guarini, current home of the Shroud of Turin (right, in its current, and closer-to-original, digitally enhanced forms), the length of linen said to bear the original image of the suffering Jesus Christ (though expert consensus is that the cloth was concocted in the Middle Ages, that naturally hasn’t deterred many of the faithful, and between believers and gawkers, the chapel is often jammed). Next to the cathedral you’ll find the 17th-century Royal Church of San Lorenzo, also by Guarini,  and a few steps away, the Royal Gardens. It was throughout all these august precincts, too, that personages such as the Count of Cavour and Giuseppe Garibaldi made their mark in the 19th-century Risorgimento and unification of Italy under the locally-based House of Savoy (which is why Turin became Italy’s first capital, 1861-64).

After so much orderly splendour, perhaps a touch of chaos (albeit organised) is in order. I propose just the thing: the Mercato Porta Palazzo, on Piazza della Repubblica, a classic covered produce market with loads of photo-ops. You can rev up your own credit card along portico-lined Via Roma, which leads to Piazza San Carlo, considered by many to be the city’s most beautiful square because of its Baroque architecture. Here, the top of chic is sipping a libation at one of the many cafés under the porticos, watching the world go by – a martini, a lovely Piemontese wine, or coffee, whatever your pleasure.

Speaking of coffee, this city is well known for its atmospheric caffès, such as the 18th-century Al Bicerin, where the likes of Cavour and legendary French author Alexandre Dumas came to take their bicerin (coffee with chocolate and whipped cream); Platti, where numerous writers came and wrote, such as Cesare Pavese; and the San Carlo, where you’ll find some historical memorabilia from the Risorgimento, the period of Italy’s unification.

But for learning about that era, there’s no better place to learn than the Museo Nazionale del Risorgimento Italiano, housed in yet another Guarini palazzo, once home to the country’s first parliament. Perhaps the city’s most compelling museum, though, is its Museo Egizio, which has the world’s richest collection of ancient Egypt after the Cairo Museum itself, between its mummies, papyri, and other prizes such as a statue of Ramses II.

Other highlights include La Venaria Reale, a splendid Baroque Savoy stables complex with various exhibitions that’s a UNESCO World Heritage Site; the National Cinema Museum, and Lingotto, the destrict surrounding the early-20th-century Fiat plant which is home to shops, hotels, a convention centre, and various nightspots and other entertainment venues. And of course we can’t leave out the Opera, the Royal Library, and the historic Hotel Roma e Rocca Cavour, where the writer Pavese took his life with sleeping pills in 1950.

Not big on the tourist radar? So much the better – all the more for you, when it comes to tourin’ Turin.