Spain‘s neighbour to the south is such a magical place in so many ways, including its exotic cities and towns, its nature, its beaches, and its delicious, distinctive cuisine. And when you’re visiting some of these cities, part of their magic is due to their compelling gardens, and here’s a quintet not to miss: 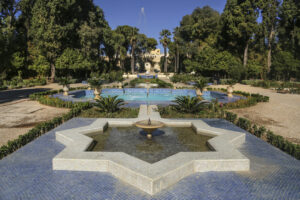 Local tourism authorities say this an oasis from the crowds of the medina (medieval quarter) was founded in the 18th century, though scholars date it to the latter half of the 19th. In any case, it was once exclusively the domain of the sultans but in 1917 was opened to the public. Its 7.5 hectares (18½ acres) and more than 3,000 species of plants are divided into the Andalusian Garden, the Mexican Garden, and the Bamboo Garden, and along its pathways there are also fountains and benches where you can take a break. Closed on Mondays.

Just 1ha (two ac,) in size, this one (top) is named after creator Jacques Majorelle, a French painter who came to Morocco in 1917 to recover from cardiac issues, and eventually settled permanently in Marrakesh. Passionate about plants, he gradually built a botanical garden around his bright blue Cubist villa. Much later, in 1980, fashion designer Yves Saint Laurent and his business and life partner Pierre Bergé acquired the property and revived the garden, considerably increasing plant species – from every continent – and establishing the Pierre Bergé Museum of Berber Arts. Try to buy tickets online in advance to save yourself from having to queue. 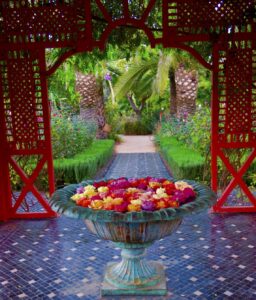 Located in the Ourika Valley near Marrakesh and accessible via free shuttle, the newest of all the gardens on this list was also created by an artist, Austrian singer and multimedia/performance artist André Heller. Its 3ha (7½ ac.) contains an explosion of colours and originality along with more than 250 species of plants. In addition to its flora, this garden stands out for its botanical-themed sculptures by the likes of Keith Haring and Pablo Picasso, along with lovely views of the snowcapped Atlas Mountains. There’s also a museum and a café.

The smallest garden on our list belongs to a riad (palace) in the medina built in the mid-19th century for a kaïd (chieftan) from the Atlas Mountains and which after the death of its last owner in 1934 fell into disrepair until 2008 when an Italian couple took over, rehabilitated it, and finally opened it to the public in 2016. It’s divided into an “exotic garden” with plants from all over the world and an “Islamic garden” patterned after the original 19th-century layout, and the burbling of fountains is heard throughout. 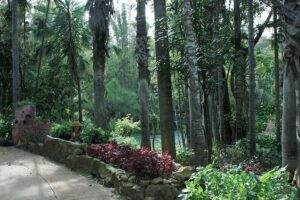 Founded in 1952 in the nearby town of Sale by French horticultural engineer Marcel François, this 1.6ha (four-acre) bit of paradise is home to vegetation from not just Morocco but also China, Japan, Brazil, Polynesia, the Caribbean, and more. In addition to its fountains, waterfalls, trees and plants, there’s an aviary, a reptile house, an indoor-outdoor herbarium, and a museum devoted to the history of the garden as well as environmental protection. And all for less than one euro per ticket.

These are just another marvelous aspect of a marvelous country. Learn more from VisitMorocco.com and book Iberia flights to Marrakesh currently from 70 euros and to Rabat from 243.