For those who both love good food and love to travel, exploring new cuisines is always an appealing allure of exploring new countries. And in that sense, the South American country of Ecuador offers some tasty surprises indeed. Though not internationally well known like the cuisine of, for example, next-door Peru, this country’s culinary menu is diverse and delicious, from the hearty mountain fare of the Andes to the seafood of the tropical Pacific Ocean coast. So as this blog’s resident foodie, I’ve taken it upon myself to put together a look at what you can expect if you hop a flight to capital Quito or to the country’s largest city, coastal Guayaquil. 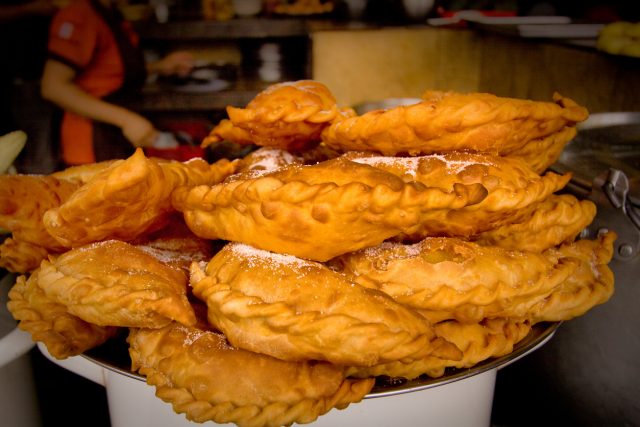 An excellent starting point is to look at what’s really a keystone of culinary tradition not only in Ecuador but pretty much anywhere: street food like that which especially abounds in Quito’s La Floresta neighbourhood. To my mind, top examples would have to include fried empanadas de viento (above), referred to as “wind empanadas”, because they’re usually sparingly stuffed with cheese plus a touch of onion; but what makes them special is that they’re sprinkled with sugar (sounds like an odd combo, I know, but trust me, they’re addictive). Another is choclo asado, white corn on the cob that’s charcoal grilled, then anointed with a creamy sauce with fresh cheese and cilantro. More? How about maduros, ripe green plantains fried and stuffed with cheese; carne en palito, thinly sliced beef dressed with garlic, the distinctive local seasoning achiote, and cumin and grilled on skewers; and a breakfast classic from the coast called bolones de verde – mashed green plantains formed into balls, filled with cheese or pork, and fried until crispy.

Soups and stews are another big category in Ecuadorian cuisine, bringing together a wide range of ingredients, flavours, and textures. One that’s considered a national dish, and also hails from the Pacific coast, is encebollado (above), a stew of albacore tuna (it can also be prepared with billfish, bonito, or other kinds of tuna) cooked with seasonings such as cilantro and cumi and served with cassava and the pickled onion that gives the dish its name; savoury and complex, it’s also considered a folk remedy for ailments including hangovers. Locro de papa is a traditional potato-and-cheese soup of the mountains, seasoned with garlic, achiote, cumin, and cilantro, while sancocho is a hearty beef-and-veg stew and caldo de bolas de verde is a beef soup with balls of mashed green plantains stuffed with minced beef and peanuts.

Now let me turn to seafood, another big deal here as there are more than 2,200 kilometres of coastline, yielding an abundance that supplies not only the entire country but provides more than a third of Ecuador’s non-oil exports (tuna being the main product). And as in its neighbour Peru, here one of the most popular dishes is ceviche (top) of shrimp – as well as fish, crab, lobster or practically any other seafood – curedin lemon or lime juice and mixed with red onion and various seasonings. Also well loved is encocado of shrimp or fish (above), which involves seasoning with spices along with lemon or lime, then marinated and simmered in a sauce of coconut milk, cilantro, onions, and bell peppers.

As for meat mains, the most popular involve pork, such as fritada (fried in its own grease and accompanied with green plantains, cheese, and corn) and hornado de chancho (above, marinated in a fermented corn drink called chicha and slow roasted to crispy/tender perfection). But perhaps the most exotic standouts of any Ecuadorian dish are cuy chactado or cuy asado (deep fried or roast guinea pig), eaten in the Andes for 5,000 years and with a taste some liken to a cross between chicken and rabbit. It’s such a big deal in this country that some restaurants are cuyerías – specialising in cuy – and for the last few years a national cuy festival has been held, including of course celebrations of folkloric music and dance. 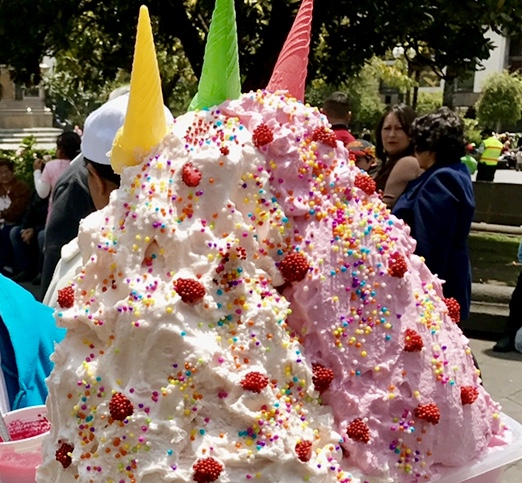 And of course let us not forget the final sweet touch. As in the rest of the Spanish-speaking world, flan (crème caramel) is often front and centre, and here besides the traditional straight up flan, it also comes in two popular flavours, pineapple and coconut. Others that are more specifically Ecuadorian include espumilla (“little foam”, also called suspiros, “sighs”) a kind of mousse made with egg whites and flavouring, especially guava, lemon, and cinammon; dulce de zapallo, caramelised pumpkin or squash in cinammon-and-clove-infused sugar syrup and served with fresh cheese; and come y bebe (eat and drink), a refreshing and very liquidy (hence the “drink” part) fruit salad usually made with papaya, bananas, pineapple and orange juice.

Hungry for the real thing after all that description? Check out Iberia’s cheap flights to Quito and Guayaquil – and bring your appetite!