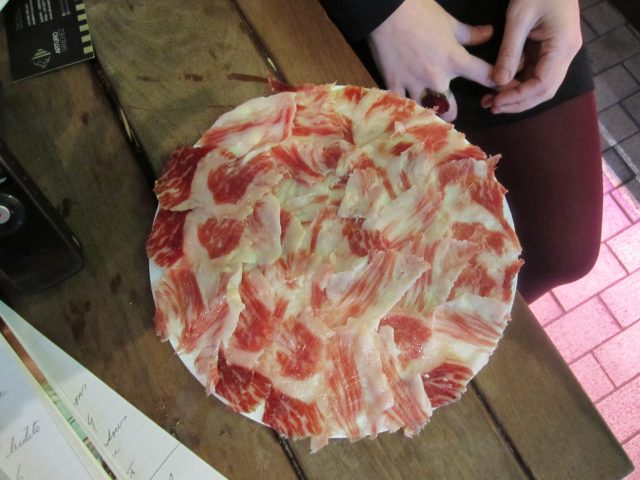 It’s absolutely impossible to not come across ibérico ham and Serrano ham when travelling in Spain. From garden-variety bars and cafés in any and every town to the most exquisite fine-dining restaurants, these razor-thin slices of nutty, buttery pork hock from pigs raised organically in western and southwestern Spain (especially the provinces of Salamanca, Extremadura, and Huelva, the last being home to the most famous locale of all, the town of Jabugo).

Though similar in concept to Italian prosciutto and Portuguese presunto, Iberian jamón has a distinctive texture and flavour all its own, thanks not just to the pig’s breed but its particular diet: the bellotas (acorns) that carpet the floors of these regions’ oak forests from spring through fall (otherwise, their fare is largely fresh clover). The most select breed is the black Iberian pig – just six percent of the millions in Spain. 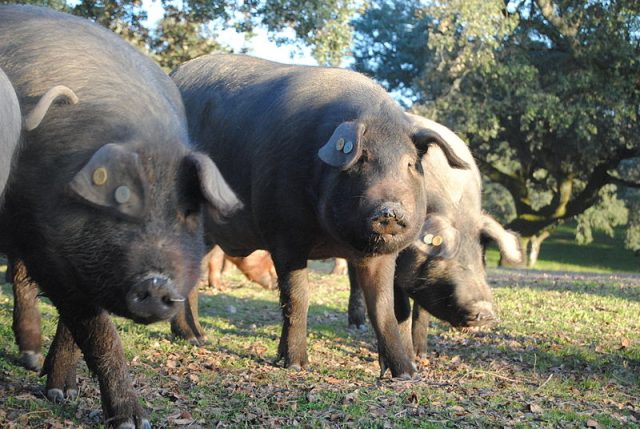 The artisinal Arturo Sánchez e Hijos factory in Guijuelo, near the Castile and León city of Salamanca, dates back four generations. Their pigs are hand-picked for breed, feed, and structure, which include dark skin with a sparse coat, a pointed snout and long slender legs. Spaniards prefer to say the pigs are sacrificed, rather than slaughtered, before each leg is rubbed with sea salt and hung on a hook so as not to touch others. More than 300 plant windows here are manually opened and closed several times a day to catch the air stream from nearby mountain ranges needed to cure the meat.

There are three pork classifications ranging from the succulent pink of the free-range, acorn-eating pigs to a dark, ruby red of lesser qualities. If the label reads “Ibérico” but not “bellota“, that cured meat came from an Iberian pig fed some acorns but also pasture grass and cereals, and with its life spent mainly indoors. The least expensive and most common is jamón serrano, made from the white pig that ate grain, lived indoors, and was cured for one year. 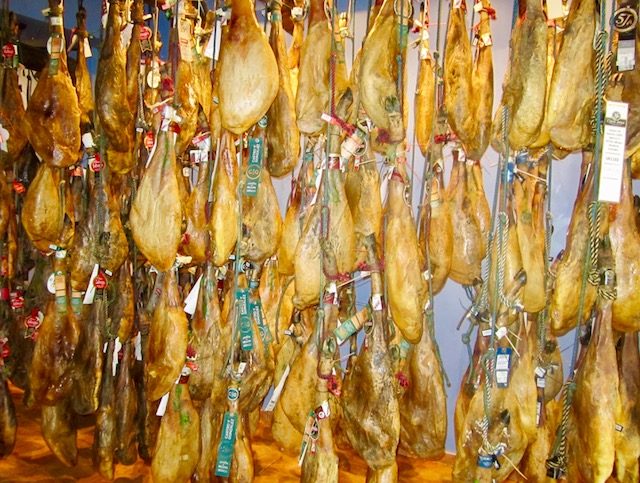 Since 2014, due to increased confusion about the various grades and to educate the public, government labeling now mandates the percentage of Ibérico genetics in the breed, along with where the pig was raised and what it was fed. Imagery of an oak forest (dehesa) can’t appear on the package if the pig wasn’t raised there. By 2019, Spain expects all cured pork products to have color-coded labels from black for the best, followed by red, green and white.

Considering cured pork meat is a $1 billion-a-year business with markets opening in China, Hong Kong, and Japan, recent and successful lobbying by large meat producers has redefined Ibérico to include cross-bred pigs where one parent was not a 100-percent Ibérian pig. That’s led to full-on DNA purity testing at times, although prohibitively this is of course expensive one pig at a time.

Regulations aside, a visit to Spain should include definitely tasting acorn-infused jamón. Short, wafer-thin slices are served room temperature with the marbled meat surrounded by its glistening fat (a good fat, though – increasing good HDL cholesterol and reducing bad LDL cholesterol). Carefully lift a small, pinkish sliver to your nose. Aficionados smell the slice seeking the nutty aroma, which some say prepares the mouth to accept the delicacy. Place it against the top of your palate so the fat melts properly. The meat should not be chewed and swallowed immediately. It’s a slow food, sometimes consumed with Manchego cheese, mini bread sticks, and of course good Spanish wine. 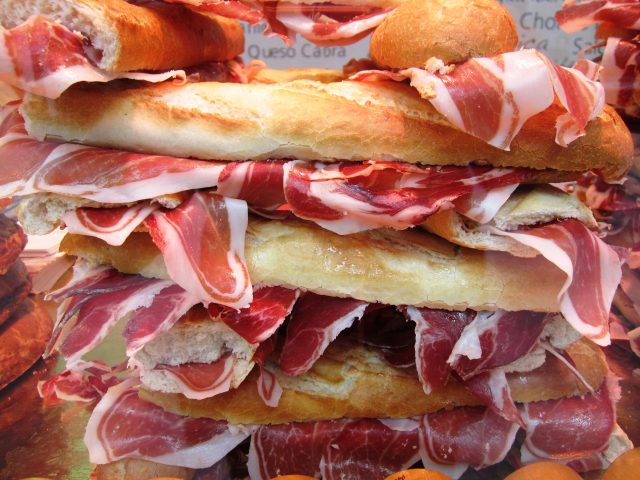 It’s official when the Guinness Book of World Records gets into the picture, which it did in 2016 to award farmer Eduardo Donato, owner of Jabugo’s Dehesa Maladúa brand, for selling the world’s most expensive jamón leg; he produces 80 per year, at a cost of around 4,700 USD each. His rare Manchado de Jabugo pig takes three years to mature and another six to fully cure. Donato’s highly personalised brand of pig raising even includes a homoeopathist who prescribes a mixture of extra virgin olive oil and ash from the holm oaks be rubbed on wounds any pigs receive out on the range.

Although prices vary by producer, a hock of acorn-fed pig weighting about 7.5 kilos (17  pounds) – unsliced and with a black label, costs around 650 USD, and an 85-gram (three-ounce) platter or a hermetically sealed package goes for about 23 USD. For an on-the-go bocadillo (baguette sandwich, above), prices range from 4 to 8 USD. 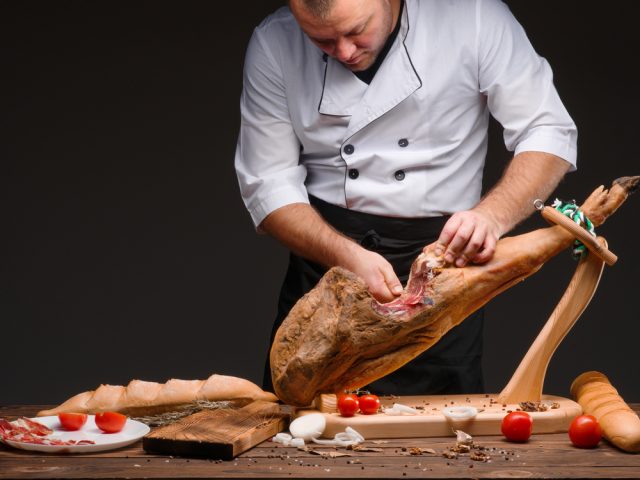 The popular farm-to-table concept has also upped the ante for Spain’s jamón producers, who now sell directly to the public either at own exclusive outlets or restaurants and delicatessens. For example, also Salamanca-based Beher has an outlet in Madrid‘s Chueca neighborhood including jamoneros (ham carvers) like the one above behind the delicatessen-style counter who offer tastings, a menu for folks who want to eat in, and plenty of take-away. 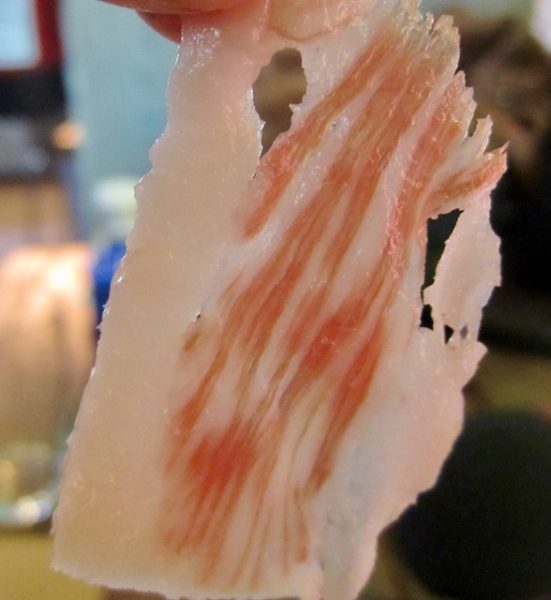 Then there’s the showroom/shop of Gondíaz near the Oriente Palace, founded 56 years ago in [PLACE TK], whose founder introduced jamón to Madrid by bringing it in his own car. Today the company sells thousands of hocks of pata negra (“black foot”, referring to the colour of the pigs’ hoofs) legs and shoulders or hand-slices the product.  “My brother selects one ham at a time at the factory,” said sales director José Ignacio González Díaz-Tendero, standing in the showroom with dangling cured legs behind him. Two requirements which haven’t changed in centuries must be met: the pig has eaten a lot of acorns and its fat content closely monitored. “What he’s seeing on the outside of the cured ham is a good indication of what’s inside. Then he puts his finger into the leg. If the right amount of fat comes out, it comes to our store.”

Perhaps the best known high-end brand, Jabugo’s Cinco Jotas, operates three contemporary-style restaurants in Madrid, with a menu chock-full of its products. Another, Guijuelo-based Joselita, runs a restaurant in the city’s fashionable Salamanca neighbourhood, with large picture windows on the street to showcase both its inviting interior and its jamoneros at work.

All of which goes to show that there’s perhaps no better place to ham it up and pig out in the world than Spain!

To check out this blog’s previous post on jamón serrano, click here, and for yet more info have a look at FoodsWinesFromSpain.com.

Judith Glynn is a freelance travel writer and author of two books. She adores Spain and its food – including of course its exquisite ibéricos!