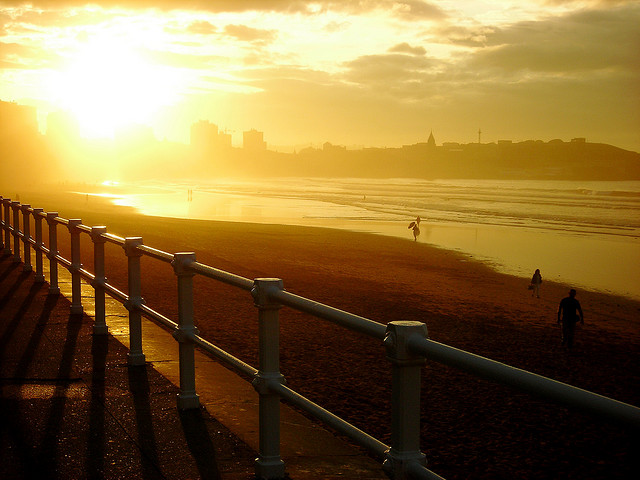 The largest city (pop. 280,000) of Asturias, one of the regions of Spain‘s green north, Gijón is also its major seaport, right astride the bracing Cantabrian Sea. And for much of the 20th century, the emphasis here was less on aesthetics (unlike the region’s capital, Oviedo, an hour away) than on industry and commerce (to this day, the city’s football club is called La Industrial). But in recent years, as some gritty areas are wont to do these days, Gijón has been busily reinventing itself – and in the process becoming more fetching as a cool destination.

Said reinvention hasn’t been quite on the order of its Basque counterpart Bilbao, with a contemporary crown jewel like its flashy Guggenheim Museum. Rather they’re several smaller (while still quite impressive) projects and a general raising of the quality of the offerings at street level – where after all most visitors experience the true vibe of a city.

When I go to Xixón (as Gijón is called in the local dialect, Asturianu), I always pay homage to the city’s eternal mistress, the sea. That may sound like cheesy sentiment, but it’s true that some of the most fetching and even dramatic parts of town lie along its waterfront. That includes the long, curving Playa de San Lorenzo (top), alive with beachgoers and events in summer and at other times of year extremely atmospheric for strolling, both on the sands and on the lamppost-adorned promenade above them.

At the promenade’s eastern end is the Termas Romanas de Campo Valdés, the only ancient Roman archaeological site in Asturias. The museum consists of the roofed-over ruins of a public bathhouse dating back to the 1st to 4th centuries AD. This complex is part of the oldest part of the city, Cimadevilla, a peninsula that is the site of the original Roman settlement of Gegionem. In recent centuries, the cobbled streets and colourful buildings of this small town within a city became home to fisher folk, and are charming to stroll. 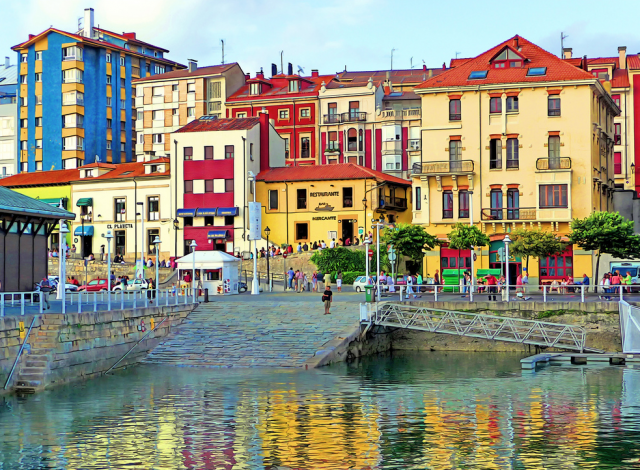 But there are plenty of “sights” to see here, as well, including the 15th-century Gothic Church of San Pedro (the city’s most distinguished, actually a faithful reconstruction of the original destroyed in the 1936-39 Spanish Civil War), the 18th-century Baroque Palacio de Revillagigedo (an icon of the city, now home to an international art centre), the Jovellanos Museum-House (a 15th-century townhouse which was the birthplace of the distinguished 18th-century statesman, author, and philosopher Gaspar Melchor de Jovellanos), and the most recent addition (1990) up on Santa Catalina Hill, the enormous abstract cement Elogio del Horizonte by the Basque sculptor Eduardo Chillida. Furthermore, these days it’s become one of Gijón’s liveliest nightlife districts, packed with bars and restaurants (plenty of others – sometimes very cool, indeed – can be found in the more modern town).

At the promenade’s western end is the Parque de Isabel la Católica. the city’s largest green space, built in 1941 under the régime of Generalissimo Francisco Franco and named after Queen Isabella, who presided over the first unified monarchy of Spain. Its fetching 15 hectares (38 acres) along the Piles River harbours various tree-flanked lakes home to a variety of bird life (including swans), centred around French-style formal gardens with their iconic peacocks and populated with various statuary depicting mythological figures as well as various historic figures.

Then it’s time to venture over to the 19th-century part of the city, where as good a place as any to start is the handsome, harmonious Plaza Mayor, dating back to the 1860s, and site of the city hall. Nearby streets have turned into a kind of Gijón SoHo, and are fun to explore especially if you’re a shopper, especially those like Calle de la Libertad and Calle Cabrales, where in recent years a number of cool vintage and modern clothing boutiques have opened, such as Sequel, LaTwin, and La Merced 3.

And let’s not forget the other strands in this beachfront city. The Playa del Poniente (Sunset Beach), bordering the marina out west of Cimadevilla, was created in the 1990s and in addition to the usual beachy activities is especially known for its special events, such as concerts during August’s Semana Grande festival and other quirky happenings such as the successful attempt in 2013 to set a record for simultaneous overhead pouring of apple cider (a particularly Asturian way of serving a particularly Asturian speciality).

It’s also the site of a couple of other cool attractions. The modern thalassotherapy spa and recreation centre Talasoponiente features an indoor pool (and cool twisty water slide!) as well as heated, saltwater pools outdoors where you can stay warm even when it’s chilly, all with an expansive view out over the Cantabrian Sea. Nearby is the 11-year-old Acuario de Gijón, with 4,000 square metres (43,000 sq. feet) covering a dozen marine ecosystems and more than 500 species (including some fearsome sharks!) – the aquarium with the largest biodiversity in Spain. Then a bit farther out west still, by the way, are the wilder beaches including Playa Serín, Playa Estaño, and Playa de la Ñora.

Another spot well worth a visit if you have time – a 15-minute taxi or bus ride from downtown – is the Universidad Laboral, a 1950s complex that includes Spain’s largest building and is considered the most important Asturian architectual landmark of the 20th century, designed in traditional style. In addition to housing Asturias TV and schools of drama, music, and industrial-arts (guided tours of the grounds available), there’s now also a “city of culture” with exhibitions, concerts, and other cool events.