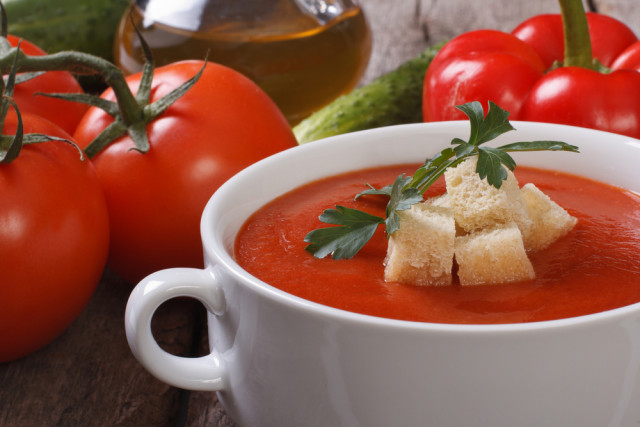 The immense variety of Andalusian cuisine is matched only by its diversity as a territory: eight beautiful provinces where you will find coasts, marshes, mountains, plains and remote mountain areas. This in addition to its deep roots of identity has yielded one of the richest culinary traditions of not just Spain, but also Europe. Some of its recipes have managed to cross borders, such as gazpacho, flamenquines, and sardine skewers, but here are other lesser-known dishes in the region – one from each province – which will tantalise and perhaps surprise you. 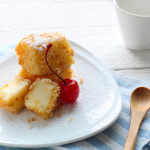 Almería: Leche Frita
The secret to this “Fried Milk” dessert lies in simmering milk with cinnamon and lemon zest, then flour and sugar are added to thicken the mixture. This dough is left to cool, and once the desired gelatinous texture is achieved, it is coated in egg and flour, fried and topped with sugar and powdered cinnamon. If it sounds a bit odd, it’s absolutely delicious. This sweet is usually prepared at Easter time. 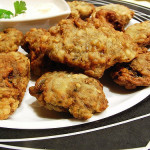 Cádiz: Ortiguillas de Mar (Fried Sea Anemones)
One of the seaside delicacies par excellence in this province, these green, rock-dwelling marine anemones are dipped in egg and flour, then fried, creating a crispy coating (and served minus tentacles, by the way). Due to their delicate, gelatinous texture, ortiguillas seem to dance in your mouth, and their intense flavour is like taking a bite of the sea. 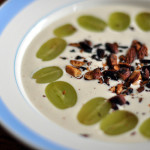 Córdoba: Ajoblanco Soup
Summer is the popular season for this cold, very white soup – ideal refreshment for Andalusia’s searing summer days. Ajoblanco’s ingredients are very basic – bread, garlic, olive oil, salt and crushed almonds – and it’s usually eaten with a spoon like most soups, though the new generation of chefs have created a trend of drinking it directly from little glasses. Grapes of small chunks of melon served alongside it create an interesting contrast of textures and flavours. 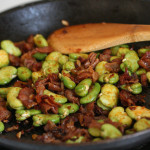 Granada: Habas con Jamón (Bean-and-Ham Stew)
This traditional hot stew – usually eaten in wintertime – is typical of Granada’s Alpujarra region, and cured ham from the town of  Trévelez with a Designation of Origin, plays a starring role. The dish is are usually eaten with a fried egg, creating an wonderful interplay of flavours that show that with the simplest of ingredients we can create real works of art. 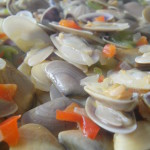 Huelva: Coquinas al Ajillo (Garlic Clams)
The Atlantic coast offers a bountiful pantry, with white prawns, cuttlefish, and sardines being some of Huelva’s most sought-after products. But it’s the clams that win, er, hands down. This exquisite mollusk is harvested in shallow waters and its unmistakable taste redolent of the sea has become a local classic. The most common perparation is al ajillo, sautéed in olive oil, garlic, chopped vegetables, and white wine. Scrumptious! 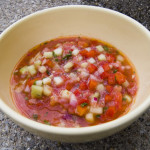 Jaén : Pipirrana Salad
A summertime dish that’s an extremely extremely flavoursome mix of fresh tomato, onion and green pepper chopped into small cubes and annointed with olive oil. Some recipes add egg and garlic, others tuna, or reduce the ingredients further into a thick paste. It’s usually eaten by dipping pieces of bread directly onto the plate. 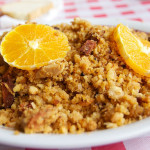 Málaga: Migas
Once a humble but filling snack for shepherds, today it’s one of the stars of every tapas bar worth its salt; the municipality of Torroz even holds an annual Migas Festival in December. During its preparation, pieces of stale bread (migas means “crumbs”) are browned and mixed with pepper, garlic, and a good selection of meat or fish, depending on the recipe (if meat, containing bacon, chorizo and black pudding; if fish, typically sardines or cod). In many ways migas embodies the very essence of Andalusia with its aroma and flavour. 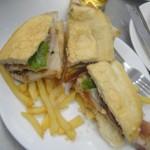 Seville: Serranito Sandwich
Seville has given us lots of distinctive dishes, but none so deeply rooted or authentic as the serranito, a sandwich filled with pork, sliced tomato, fried green pepper and Serrano cured ham (some people add omelette or substitute chicken for pork, depending on taste). It’s usually served with mojo picón, a spicy sauce, yielding a truly delectable combination. Serranitos also offer unbeatable value for money, and they are so well known and liked that there’s even a chain of eateries named after them.