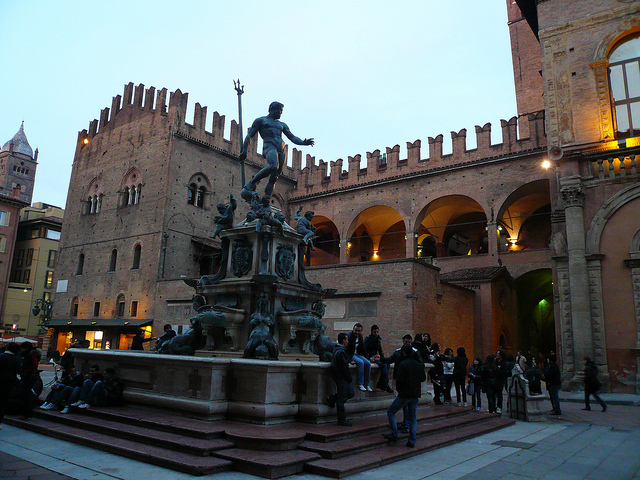 This city is famously dubbed “the Fat” – with affection, or course. And it’s also known as “the erudite” and “the red”  (“la grassa, la dotta, la rossa“). Why these three? Well, it looms large in gastronomy (being the home of tortellini, Bolognese sauce, and mortadella, aka the eponymous bologna); learning (its university, founded in 1088, is one of the world’s oldest); and architecture (including distinctive red-brick buildings and vermillion-colour roofs; only more recently was the “red” meaning expanded to include its post World-War II left-wing political tendencies). Northern Italy is full of extraordinary cities, but few are classier than Bologna. In the region of Emilia-Romagna at the foot of the Appennine Mountains, located between Florence to the south and Venice and Milan to the north, Bologna is intensely historic yet also full of modern life, with college students everywhere you look. You’ll spot them trotting or running to make class, downing coffee like crazy people, and studying and socialising in various public places.

The old seat of the university (from the 16th to the early 19th centuries) is the Archiginnasio, lined with elegant porticos, where you can have a look around, then stroll to the heart of the city, the Piazza Maggiore,  where you’ll find the San Petronio Church and the Palazzo d’Accursio, home to the city government. The Piazza Nettuno (top) and Piazza Santo Stefano are absolutely worth a stop for their monumental beauty, full of both religious and civil buildings, as well as locals sitting and chatting animatedly. 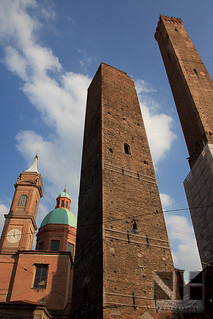 Another of the unique features of the local architecture are its medieval “skyscrapers” (right), dating from the 12th century and at one time reaching a peak number of around 180, essentially rooted in a competition among the city’s aristocratic families to build the highest tower and so demonstrate the power of their own dynasties. Now there are fewer than 20 left, between 39 and 97 metres tall (128-318 feet) the most notable of which were the Garisenda and the Asinelli, known as the Two Towers (you can climb the latter of the two, if your feet can take the 500 steps, and be rewarded with some pretty spectacular views over the city and surrounding lands).

Back on terra firma, the Mercato Vecchio (Old Market) is a wonderfully atmospheric spot to browse for produce, mortadella and salamis, and other locally produced edibles. And speaking of eating, here of course the specialty is pasta, but the local pasta is even more special than elsewhere in Italy. You’ll positively lick your fingers at virtually any of its trattorias, like for example Osteria dell’Orsa, with the longest spaghetti in town (up to 40 centimetres!). After your pig-out, walk part of it off along the D’Aposa Canal, which will remind you of Venice.

You should also visit a pair of excellent local museums, the Museo d’Arte Moderna (MAMBO) and the National Art Gallery, with masterworks of Giotto, Titian, and Tintoretto. After dark, head for  Via del Pratello, a neighbourhood once grubby and prostitute-ridden, now abuzz with young people who’ll keep the good times rolling well into the night.

And that’s no baloney.