As we reported quite recently on this blog, Germany’s capital has no shortage of remarkable sights, sites, and experiences to offer visitors. But one of its central allures – especially for lovers of culture in general and museums in particular – is the Museuminsel. This small island on the River Spree in Berlin’s historic Mitte district – accessible via a pair of pedestrian bridges – is home to a complex, dating back to the early 19th century, of several key institutions, and it’s so distinguished that it’s been declared a UNESCO World Heritage Site – more proof, if any is needed,  that it’s very much worth at least a couple of days of the time of any culture vulture worthy of the name. They include the Altes Museum (classical antiquity, especially ancient Greece); the Alte Nationalgalerie (painting and sculpture, especially by 19th-century European Romantic and Impressionist artists); and the Humboldt Forum (the newest, likened the British Museum and a magnificent presentation of world cultural heritage, along with temporary exhibitions covering art, other aspects of culture, and science). But if you don’t have time for all of them (and really, few of us would, at least the first time around) here are the three absolutely not to miss: 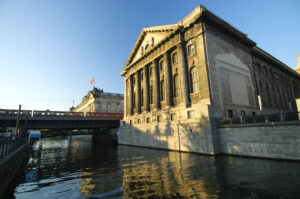 One of the world’s foremost collections of archaeological treasures is actually three museums in one. The Antikensammlung (Antiquity Collection) is among the top in the world dedicated to ancient Greece and Rome,  including architecture, sculptures, mosaics, bronzes, jewelry, and pottery; The single most prominent exhibits are the Pergamon Altar from the 2nd century BCE, with a 113-metre (371-foot) sculptural frieze depicting the struggle of the gods and the giants, and the Gate of Miletus, built during the reign of the Roman emperor Hadrian in the 2nd century CE.

In the Pergamon’s basement, meanwhile, the Vorderasiatisches Museum is devoted to the ancient Near East, covering 6,000 years of art and culture of regions including Mesopotamia, Babylonia, Assyria, Sumer, and Anatolia.  Superstars here include the Procession Way of Babylon and the mythical Ishtar Gate, built around 575 BCE and considered one of the original Seven Wonders of the World.

Third, in the south wing, comes the Museum für Islamische Kunst, showcasing the most comprehensive collection of Islamic art and artifacts outside the Cairo  Museum, stretching from the 7th century (when Islam was invented) through the 19th, and from medieval al-Andalus to India., and being especially strong in artifacts from Egypt and Persia. One of the iconic pieces here is the
Mshatta Façade from one of the 8th-century desert castles of Jordan. 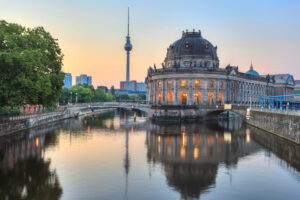 Named after its first director (in the late 19th and early 20th centuries), this distinguished institution is another “three-in-one”. Its Sculpture Collection and Museum of Byzantine Art brings together a variety of sculptures, ranging from Coptic Egypt to Europe from the Middle Ages through the 18th century (including well known names such as Donatello, Giovanni Pisano, and Luca della Robbia), as well as Byzantine and post-Byzantine icons and other works from the 3rd to the 15th centuries, from Greece, the Ballkans, Turkey, Russia, and the Near/Middle East.

Then, switching gears a bit, the Bode’s Münzkabinett is one of the world’s largest coin collections – more than a half million items – with pieces dating back to ancient Greece and Rome and also including quite a bit of Byzantine and European medieval and post-medieval coinage; medals and medallions especially from the Renaissance period; paper money; and coinage machinery. 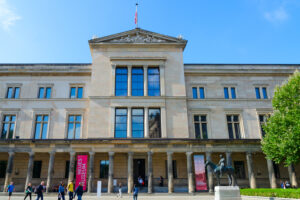 Another masterful museum, its 8,000 square metres (TK sq. feet) is home to three collections totalling around 9,000 objects, ranging from prehistory to the High Middle Ages. First off there are more classical antiquities from the Antikensammlung (above).  Alongside that, the Egyptian Museum and Papyrus Collection is one of the world’s most important of its type, with myriad sarcophagi, jewelry, and sculptures from Sudan as well as Egypt – most famously the polychromatic limestone bust of Queen Nefertiti crafted in 1345 BCE. Thirdly, the Museum of Prehistory and Early History includes some of the largest number of prehistoric archaeological finds of any world institution, from the Paleolithic through the Stone, Bronze, and Iron Ages, and up into the Middle Ages. Highlights include a famous Neanderthal skull from the dig in Le Moustier, France; Heinrich Schliemann’s collection of Trojan antiquities; and the conical, Bronze-Age Berlin Gold Hat. The Humboldt Forum at the Royal Palace in Berlin is not a conventional museum, but a new place for culture and science, a place of diversity and polyphony. The visit brings together exceptional collections and a varied program of exhibitions, events, cultural education and digital offerings that will inspire you with new ideas about the world of yesterday, today and tomorrow. Inside, you will find the Ethnological Museum and the Asian Art Museum, where you can admire more than 10,000 outstanding pieces. In the summer of 2022, the east wing of the Humboldt Forum will also welcome visitors with other large introductory and temporary exhibition areas.
It is a cultural stinker that reflects and condenses the history of Berlin and Germany and has had a highly symbolic character over the centuries.

And in order to take in all these museums – as well as hundreds of Berlin attractions and venues for dining, shopping, and entertainment, along with public transportation to move between them – we highly recommend the Berlin Welcome Card, which for a single price will save you lots of euros over the course of your stay. It’s available for various time frames, from 48 hours to six days.

Intrigued by all this? Book a flight to Berlin and let your inner museum geek romp through its Museuminsel!