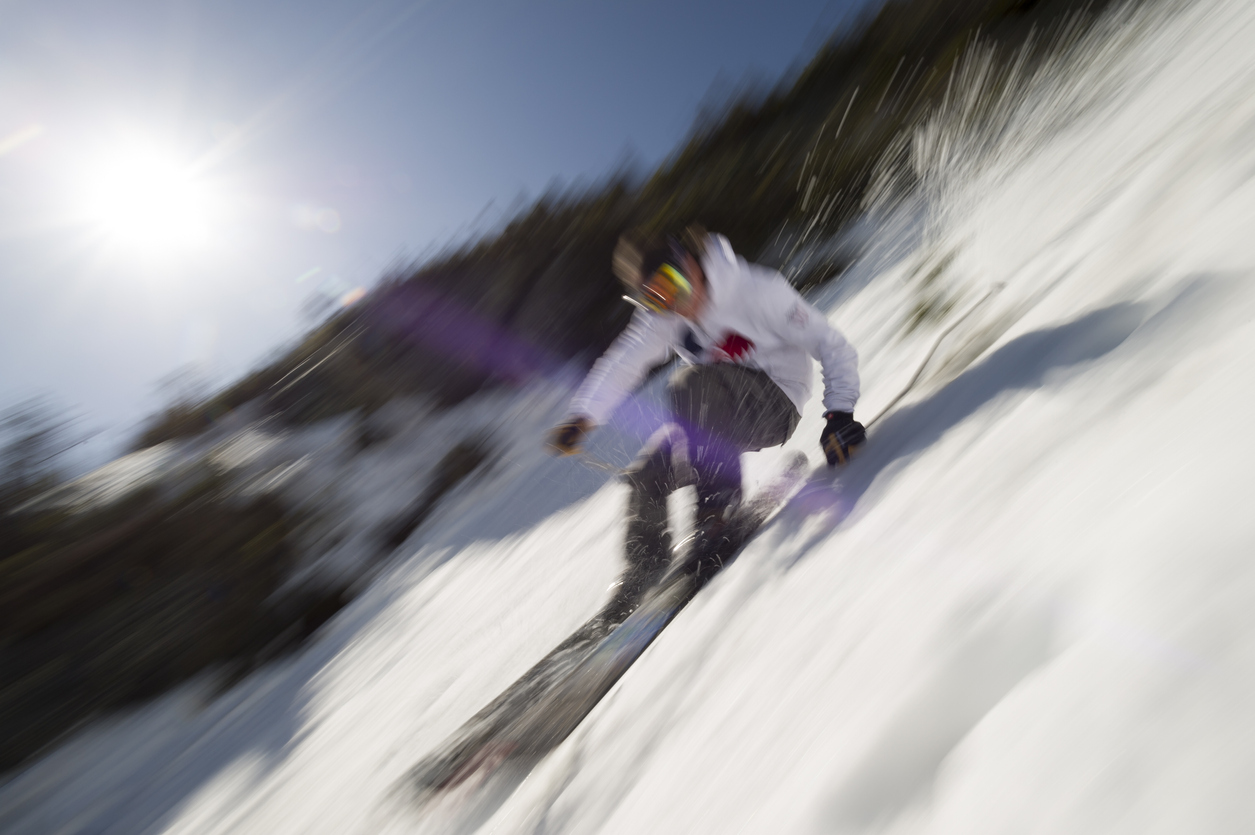 If you consider yourself an expert skier or snowboarder, you may find yourself forced to reassess when you tackle the raw terrain of winter resorts in the Northeast of the United States. For anyone who learned their lines on perfect pristine pistes in, say, Méribel or Vail, the terrain and temperature along with snow quality on the slopes here can come as a bit of a surprise – even a shock.

Of course, after a fresh snowfall, there’s powder snow – but it’s not the talcum-like dream that you find out in the Rocky Mountains, in Utah or Colorado. More often the slopes here are hard-packed with what I once heard a local radio presenter describe as “frozen granular patches”. To you and me, that’s more commonly described as “ice”.

Narrow, bumpy trails generally replace the wide graded motorways you might be used to elsewhere in North America. Strong technique is not an optional extra, but a basic essential if you want to truly enjoy the skiing and snowboarding here.

All of this explains why the average East Coast skier and snowboarder really knows his or her stuff. They say that if you can stand up on the Front Four at Stowe, the iconic Vermont resort, you can stand up on any expert run in the world; National, Goat, Starr, and Liftline are demanding double-black-diamonds that require a razor-sharp edge to negotiate the kind of conditions you’d otherwise only encounter of a FIS World Cup course on race day.

Cold and gnarly it may be, but East Coast skiing has plenty of favourable points, too. Many of the resorts are extremely well set up with modern lifts, extensive snow-making facilities, and great terrain parks. And cold on the slopes it may be, but the après-ski ambiance is heart-warming.

Best of all is the location, especially if you’re travelling from Europe or the major cities in the eastern USA. A typical flight time to the nearest gateway for many of these, Boston, is 7½ hours from London and Madrid – as opposed to ten to Denver for the Rockies – and a time difference of two hours less, meaning less jet lag.

There are winter resorts of varying quality in a half dozen states of the Northeast, with most of the better ones concentrated in tiny Vermont.  Here’s eleven of the best, both in the Green Mountain State and in three others (several more can be found in northeastern Pennsylvania‘s Poconos Mountains).

A bit remote – located in the Carrabassett Valley.of western Maine a bit over 4½ hours from Boston – the East’s second biggest ski area centres around the eponymous mountain, 1,291 metres (4,237 feet) high. Known for its generous annual snowfall, it features 13 lifts and 80 trails, with a continuous vertical drop of 860m (2,820 ft.), the second longest in New England. The Snowfields has double-black-diamond runs above the tree line, and there’s the Brackett Basin backcountry area with its steep chutes and tree skiing. You can also ride a snowcat up Burnt Mountain for yet more taxing terrain, and other activities include Sno-Go ski biking, dogsledding, ice skating, snowshoeing, and an indoor “anti-gravity” complex. There are a handful of places to stay, eat, and party, and après-ski is small but fairly lively.

The Berkshires range running up and down the western end of Massachusetts is packed with both surpassing natural beauty and historic, centuries-old towns such as Lenox, Stockbridge, and Hancock, this last home to the fascinating, late-18th-century Hancock Shaker Village (once home to a quirky Christian sect) as well as southern New England’s largest winter resort, powered totally by wind/solar and with a skiable area of nearly 68 hectares (167 acres). Jiminy’s vertical lift is 3,773m (1,150 ft.) and there are nine lifts and 45 trails (including some open till 10 pm). There’s a nice choice of shops, restaurants, and pubs nearby, and it’s all a convenient trip from Boston (just under three hours away) and New York City (about the same).

Owned and operated by the state of New Hampshire in Franconia Notch State Park up in the Whiteface Mountains, a bit over 2½ hours from Boston, this is more of a local’s mountain than a destination resort. Yet several years ago, Ski magazine listed it in the top 10 in the East for value, access, challenge, character, lifts/lift service, and overall satisfaction. Rising 1,240m (4,080 ft.), it has six lifts on its north-facing slopes, 97 trails, and a few cafés and a pub located at the mountain base. It also has a good bit of history – North America’s first aerial passenger tramway opened here in 1938, and the resort hosted North America’s first World Cup race in 1967.

Its peak rising 1,483m (4,865 ft.), Whiteface Mountain is located in the town of Wilmington in the Adirondack Mountains, a five-drive north of New York City., and its ski area offers 88 trails totalling 35 km (22 miles), including the biggest vertical drop any East Coast resorts (1.045m/3,430 feet) and The Slides, double-black diamond wilderness-terrain runs considered to be among the East’s most challenging. It’s not for nothing that Whiteface hosted the alpine skiing competitions of the 1980 Winter Olympic Games based in Lake Placid, 20 minutes southwest. And Lake Placid is where most people base themselves for overnighting, apres-ski (though there are also a couple of seasonal spots in Whiteface), and sights/attractions such as the Olympic Museum (full of memorabilia from the ’80 Games as well as those of 1932, also held here) and the various Olympics facilities such as ski jumps up to 120m (394 ft.; take an elevator up to an observation deck for dramatic views) and bobsled/skeleton/luge runs (sign up for a spin!).

In the Green Mountains nearly at the Canadian border, a four-drive from Boston, Jay Peak gets the most snowfall of any winter resort in the Northeast (some aficionados dub it “the powder factory”), and has nine lifts and 81 trails – 2/3 of which are intermediate and above, with a vertical drop of 650m (2,153 ft.). It’s especially known for skiing/snowboarding between the trees, ranging from gentle glades to more difficult ones for experts; however, there’s a lack of easy cruising runs. After the the day on the slopes ends, everyone heads for Jay Peak Pump House with its indoor slides, hoops courts, rock climbing in the activity pool, and Flowrider – a cross between skateboarding, surfing and snowboarding.

About three hours from Boston and widely considered the Northeast’s top resort, the “Beast of the East” in south-central Vermont has seven mountains, all connected by shuttle bus. There are 212 trails in all, 21 lifts, and six terrain parks, including one called Stash with more than 65 different features. Add to this plenty of double-diamond runs and gentle cruising trails for family skiing. The eight-person gondolas have heated benches, and a FIS Ski World Cup race takes place here, too. The snowmaking operation is impressive – with some 1,700 snow cannons – which means the the lifts stay open longer than in many other area resorts. The nightlife here is just as much a lure as the skiing and snowboarding, with 8km (five miles) of restaurants and bars dotted along the resort access road – everything from a smart sushi restaurant to cocktail bars and nightclubs.

In the town of Fayston, about 90 minutes north of Killington and a bit over 3½ hours from Boston, the rugged terrain here is ranked among the East’s most challenging, including natural glades, big bumps, and narrow trails snaking around the mountainside. The ski area has a 621m (2,037-ft.) vertical drop, four lifts, and 51 trails, the most challenging of which is Paradise, with trees, rocks and a frozen waterfall. And snowboarders, take note and move on, because it’s not allowed here. Accommodation is in guest houses, inns, or in private homes, and après-ski tends toward the small and cosy, with a handful of pubs, some with live music and Vermont micro-brews. (Fun fact: Mad River Glen is currently the USA’s only cooperatively owned ski resort.)

Also in the northern part of the state, in the town of Cambridge just under four hours from Boston, this family-owned and -run resort – fondly dubbed “Smuggs” –  is also built entirely with families in mind. It’s small and sweet, with just eight lifts and 78 trails across its trio of interconnected mountains, and a vertical drop of 796m (2,610 ft.). Like everywhere else in North America, there are outstanding kids clubs as well as high quality ski and snowboarding instruction, babysitting, clubs for teens, hot chocolate around the bonfire, plus evening torchlight parades and fireworks. Families can join a zip line tour or go on a snowshoe trek. You can drop off your kids aged three to 11 years at FunZone for a pizza, ice cream and popcorn, a movie, arts and crafts, arcade, and laser tag. There’s not a big après-ski scene, as nearly everyone is here as a family with young children.

Just over the hill from Smuggs, Stowe is a pretty village oozing New England charm. You’ll find some of the most challenging skiing in the East here, with skiing on Mount Mansfield – Vermont’s highest peak – and Spruce Peak. It’s also one of the state’s most popular resorts, with 12 lifts, 116 trails, and an annual snowfall of 798cm (314 inches), and artificial snowmaking covering 83 percent of its area. Add to this recipe luxury hotels, good restaurants, and lots of pampering spas and you can see why Vail Resorts decided to buy it in 2017. But you’ll need to be prepared for longer lift queues and higher than usual costs – but the skiing is part of Vail Resorts’ Epic Pass, entitling you to ski at nearly 40 resorts on the same lift pass, including Whistler in Canada, Park City in Utah, three resorts in Australia, and of course Vail itself.

Off the slopes, there are more than 50 restaurants along with a local brewery and nightlife scene. The area’s most famous lodging is the Trapp Family Lodge, run starting in the 1940s by the famous singing Austrian family of The Sound of Music fame, and now their descendants.

Near the city of Manchester in southern Vermont, some 90 minutes south of Killington, three hours from Boston, and 4½ from New York City, this 253-hectare (625-acre) spread is known for its piste grooming, fast lifts – including four six-person chair-lifts and the summit gondola – as well as a good mix of terrain for beginners to accomplished skiers and snowboarders. Some 11 lifts and 99 trails drop down from the summit at 1,181m (3,875 ft.). There’s always something going on at Stratton, from moonlight concerts to mountain-top yoga – even a women’s ski camp for instruction and ski testing.

Located in the town of Warren near state capital Montpelier and Mad River Glen (above) in central north Vermont, at more than 1,619 hectares (4,000 acres), Sugarbush is one of New England’s largest winter resorts, and offers almost everything you’d find in one of the better-known ski areas, but without the crowds and high prices that go with it. The resort has 16 lifts over two interconnected mountains,  Lincoln Peak (where most of the 111 trails are located) and Mount Ellen.; the vertical drop is 793m (2,600 ft.). For après-ski, families will appreciate the Kids Adventure Zone, and everyone will appreciate Lincoln Peak Village‘s raft of cafés, bars and low-key eateries in addition to shops and accommodation.