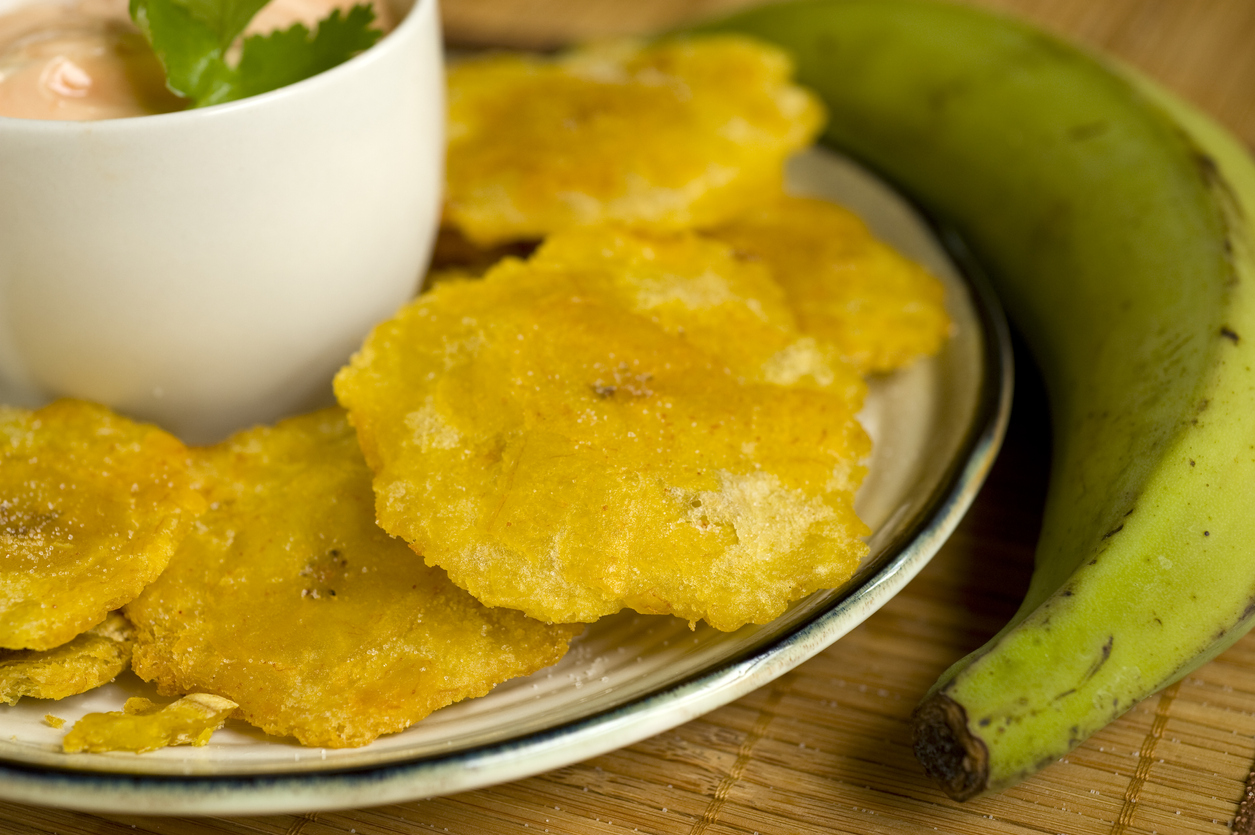 Puerto Rico is a land of world-class flavours – in its music, art, architecture, and allure of the tropical, the adventurous, and the eco. And of course in the most common meaning of the word “flavour”, as well – when it comes to eating.  Several weeks ago this blog month gave our readers a quick taste of eating across the island, and now on the day Iberia is marking the 70th anniversary of flying here, I’d like to offer up an even bigger and more detailed helping of Caribbean Latino lusciousness.

If there’s one overarching characteristic of Puerto Rican food, it’s cultural blending, with three main sources – Spanish, African, and Taíno (the pre-Columbian people who lived here) – all bringing something to the table, as it were, to create a “creole” cuisine where fresh local ingredients enjoy pride of place.

We should start our exploration with a platter of tasty fried snacks/starters that are ubiquitous from Culebra to Cabo Rojo: tostones (top; green plantains mashed and fried as flattened discs); bacalaítos (codfish fritters), sorullitos (cornmeal sticks with cheese, both in savoury and sweet versions), and especially alcapurrias (torpedo shaped fritters, with fried mashed green plantains or the tuber known as yucca (aka cassava) and stuffed with ground beef or sometimes chicken or seafood).

Moving on to the menu’s main events, one of Puerto Rico’s signature dishes is also based on mashed/fried green plantain. Mofongo (above) is a small hill of the stuff anointed with your choice of protein – beef, chicken, shrimp, even lobster in fancier environs –  a light tomato sauce, and a touch of garlic. It goes down especially smoothly with one of the fresh local fruit juices such as guava, papaya, and pineapple. 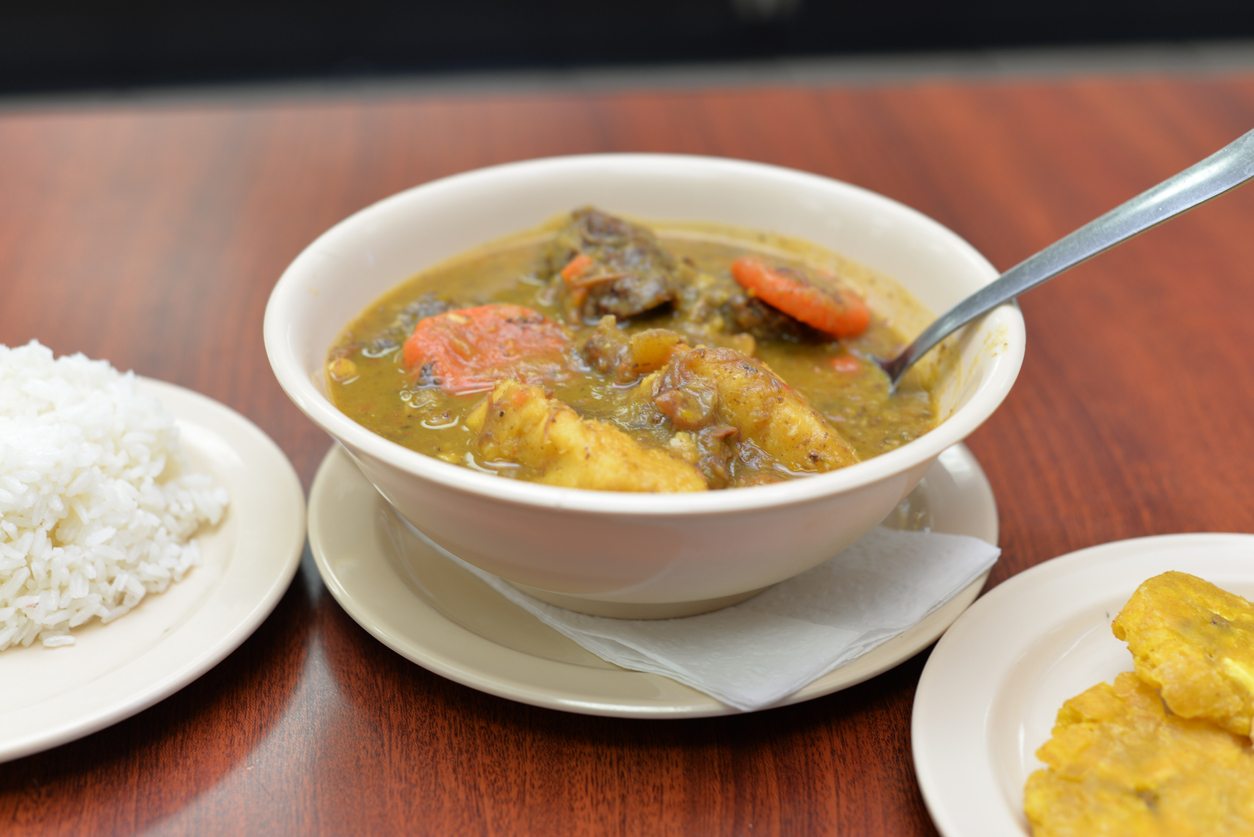 Then there’s sancocho (above), a hearty meat-and-veg dish that’s the stew of choice of most Puerto Ricans any time of year. On the one hand, it has pumpkin, carrots, corn, onion, garlic, and (usually) chili, to give it that slightly spicy touch that we like so much; on the other, beef, although some prefer to prepare it with pork or chicken. As top-quality ingredients are used, the end result will always be fantastic. Sancocho is usually accompanied by a goodly dollop of white rice.

Speaking of meat, pork is the top choice of island carnivores, and more specifically, lechón (suckling pig): very tender and juicy white meat seasoned with pepper, aromatic herbs and salt, and cooked in the old-fashioned style on a skewer over charcoal. The result? Utterly delicious. So much so that there are specialized restaurants called lechoneras, and some have gone so far as to propose legislation to declare lechon as gastronomic cultural heritage of Puerto Rico. In other words, you simply can’t miss it. 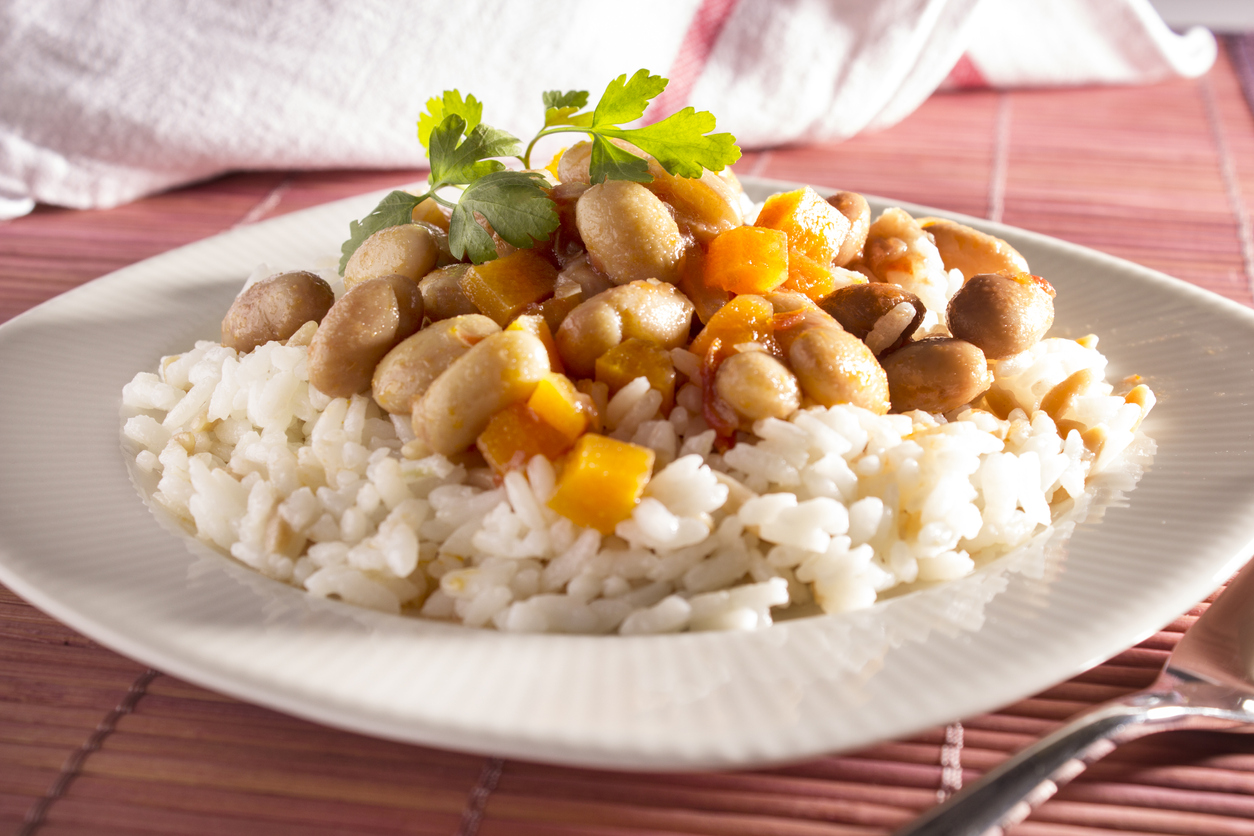 As for arroz con habichuelas (above), let’s just say that the rice with white or pinto beans, a staple in traditional island kitchens, is so good that it’s given rise to a song by popular group Gente de Zona, and when you try it, you’ll see why.

When it’s time for pudding, duty compels me to rhapsodise about the tembleque de coco, my favorite Puerto Rican post-dinner treat: fresh coconut milk, sugar, cinnamon and corn starch. As simple as it is tasty, it’s the clear star among national desserts, with a name (“trembly”) that perfectly describes its gelatin-like texture and how it quivers on the plate. And nothing better to accompany this moment than a good cup of coffee, another of the hallmarks of Puerto Rico, where there are still top-quality plantations and the art of the brew has made a comeback thanks to creative expert baristas and fancy establishments that have given it the prominence it deserves.

Now that you’re more familiar with the culinary delights of Puerto Rico, can you think of a better way to celebrate the 70th anniversary of Iberia’s flights to this tropical island than to experience the colours, the aromas, and above all, the taste of its cuisine? See you soon on board!