The first time I visited La Gomera was in 2012 for The Independent, following an invitation from the minister for tourism. I had a pair of concerns, however, to raise with the good señor: A. I don’t drive, and B. I’m a vegetarian. No worries, said he, I will drive you around the island myself, and we will have two lunches at its only vegetarian restaurant, Casa Efigenia – which just happened to be owned by his mum. Yes, the second smallest of the Canary Islands (370 square kilometres/143 sq. miles, pop. 22,000) is that kind of place. Charming and intimate, as well as largely unspoiled.

Flying to this roundish, mountainous island from Gran Canaria (you can also fly from the nearest island, Tenerife, as well as take a 40-to-70-minute ferry), I touched down at what appeared more airfield than airport, then the minister and I dropped off my luggage at one of the island’s finest hotels, the four-star Parador de La Gomera in capital San Sebastián de La Gomera (top), before setting out on my first round of touring. 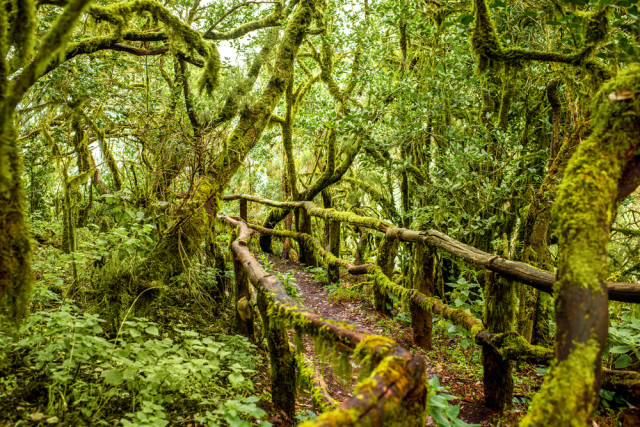 And I must say, La Gomera itself turned out to be quite a revelation. Walking in its dense, ancient laurasilva (laurel) woodlands of the Parque Nacional de Garajonay )above) was a bit like being transported to the rainforests of South America, with vast areas of dense population of flora that totally dwarfed us. Garajonay National Park dominates the north and centre of the island, and takes its name from the island’s highest point, Mount Garajonay, rising 1,487 metres (4,879 feet) above sea level.

This mountain is named after mythological characters from the Canary Island’s pre-Spanish history. Gara was the Juliet to Jonay’s Romeo, a beautiful princess who hailed from La Gomera, and he a handsome prince from Tenerife. Their parents considered the eruption of the Teide volcano to be a bad omen, and forbid the pair to marry. They made a dash for La Gomera’s highlands and stabbed themselves to death with a sharpened stick fashioned from laurel.

Another rumoured love story dates back to the aftermath of the 15th-century Spanish conquest. Between Christopher Columbus and Beatriz de Bobadilla, an aristocrat exiled from the court of Ferdinand and Isabella after the queen discovered her affair with the king; at the time, she governed the recently conquered island, having succeeded her husband, Hernán Peraza. After one of Columbus’ fleet of ships on his legendary voyage of 1492 sprung a leak, fortysomething Christopher dallied for over a month here, and many believe he spent all his available time with the Castilian beauty. Six years later, Columbus would return to the island, only to leave frustrated upon learning that his lady love had married somebody else. 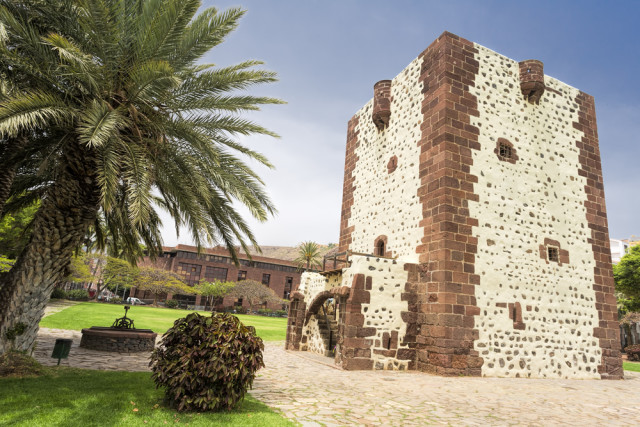 You can learn more about Bobadilla and Columbus at San Sebastián de La Gomera’s Torre del Conde and Casa de Colón. The former is the stone tower where Beatriz holed up with her children during the revolt by the island’s original Guanche settlers, which cost her husband her life before she exacted revenge by murdering most of La Gomera’s non-Spanish male population. The latter is the house which reputedly provided the spring Columbus used to draw fresh water for his ships before the historic crossing to America; it also houses an exhibition of local pre-Columbian culture.

The town’s compact ethnographic and archaeological museums are also well worth a visit for a window into the history, life, and times of the island both before and after the Spanish conquest beginning in 1404.

Beaches? Of course! Valle de Gran Rey is La Gomera’s major resort, and it’s far less developed than those on Gran Canaria, Tenerife, and even Lanzarote (which may appeal to some and turn off others). Shed your clothes (and if you like, inhibitions) with a skinny dip here at Playa del Inglés (below), one of the local nudist-friendly beaches. If the open Atlantic’s too choppy for you, try one of the natural swimming pools like the one over in Hermigua, which used to be a harbour used by plantation owners to export bananas.

Canarian cuisine can be quite distinctive, and if you try only one local food, make it almogrote, a paste combining goats’ cheese with olive oil, paprika, chilli, and garlic, which tastes best spread on bread. For a nouveau take on this classic condiment, head to San Sebastián’s La Forastera, whose simple layout belies some seriously stylish cuisine.

One particularly unique island feature is silbo gomero, a pre-Hispanic whistling language now adapted to Spanish, and traditionally invaluable to allow islanders to communicate across deep valleys and near-vertical ravines. In the restaurant Las Rosas in the hamlet of the same name, you can watch a silbo demonstration as you eat a traditional Gomeran lunch.

On the hotel front, as well as the parador, the classier establishments include the cliffside Hotel Jardin Tecina, overlooking the beach Playa de Santiago and boasting a “lovers’ cave” complete with bed with food and drinks arriving on a pulley. Valle Gran Rey’s Hotel Gran Rey is ideal for supping cocktails to a backdrop of perfect sunset. For a cheaper option, consider Hotel Rural Casa Lugo in Agulo.

La Gomera is easily explored via rental car but best discovered on foot. You can pick up trekking maps at the main tourist office in San Sebastián. For guided hikes, Gomera Walking offer winter holidays enabling you to discover the stunning interior. It will be an experience you will never forget.

Matthew Hirtes is the only broadsheet journalist living on Gran Canaria. He’s covered the Canary Islands and beyond for the likes of the Huffington Post and the Telegraph travel section. His Going Local in Gran Canaria is a as much relocation manual as travel guide.