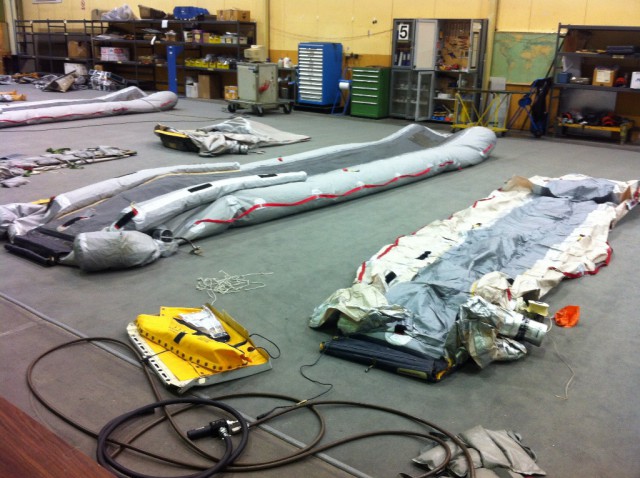 If you fly with any frequency, a phrase heard over the public address system, “crew, slide arm and cross check” is likely to ring a bell.  That “slide arm” refers to activation for potential use of the inflatable evacuation slide required on all aircraft where the floor is at least 1.8 metres (6 feet) above ground level. These slides are manufactured of various approved forms of resistant plastic, similar in consistency to rubber, reinforced with various layers to minimise the possibility of punctures or tears.

In order for these slides to be in optimal condition to be utilised correctly and safely, they are minutely examined as part of the various safety inspections all aircraft routinely undergo. Depending on the type of plane and on what portion of the fuselage they’re installed (for example over a wing or at one end or the other), evacuation slides may vary in size and inflation time). 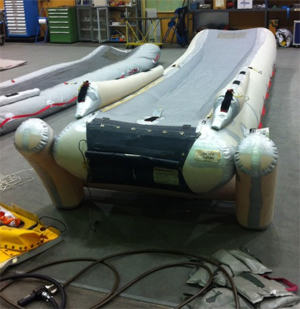 One slide for an Airbus A320 inflates in just three seconds via an internal system of highly compressed gas injection. It should also be pointed out that these slides are designed to endure a fire for at least 90 seconds as well as stand up to extreme gusts of wind without breaking or detaching from the fuselage. At Iberia’s hangars in La Muñoza, on the outskirts of Madrid, the maintenance staff showed us show they give these slides a thorough check-out.

The evacuation slides are extracted from the compartment in which they are stored within the aircraft and unfurled along the floor in a section of the hangar. Once all the material is exposed, the surface of the slides is inspected for any deterioration, including testing at partial inflation to verify that there is no leakage of air. After those tests have been passed, each slide is attached to an actual-size fuselage mock-up and subjected to additional testing including a fire-extinction simulation.

Once all of the above procedures have been successfully completed, the final, very important step is to re-fold and return each slide to its compartment in an extremely careful manner, so as to ensure that in the event of an emergency, the inflation circuit can work unimpeded to assist an evacuation.

This testing is performed exhaustively once annually throughout the useful life of each slide, which is generally three to five years, depending on whether and how many times it has been used.