Still the world’s single most influential capital because for better or worse political events here reverberate across the globe, Washington (often referred to as DC or “the District”) offers a surprisingly low-key, low-rise cityscape – kept that way by a Federal law enacted more than a century old which  limits building heights in the District of Columbia to 40 metres (130 feet). It’s a mix of the modern – from inspired to humdrum – and classic landmarks, monuments, and neighbourhoods instantly recognisable to many even beyond the borders of the United States. 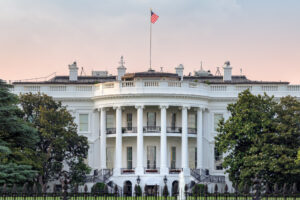 The colour of world’s most famous presidential mansion – which debuted in 1801 as the residence of the third POTUS, Thomas Jefferson – is due to the lime-based whitewash (and later lead paint) intended to better protect the neoclassical sandstone façade from the elements; originally referred to as the President’s Palace, Presidential Mansion, or President’s House, early on it came to be dubbed the White House, but this was not made official until 1902, during the administration of Theodore Roosevelt. Free-of-charge guided tours are offered, and requests for tickets must be submitted no later that three weeks and no more than three months in advance, by contacting U.S. citizens’ Congressional representatives’ offices or non-citizens’ embassies. 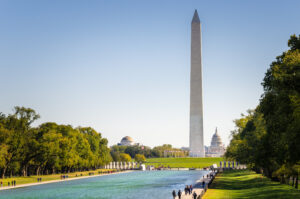 Inspired by key, also neoclassical architecture of Paris including the Louvre and the Panthéon, the central core of the United States Congress was inuagurated one year earlier then the White House and wings added in the several years following. It had to undergo reconstruct after partial burning by the British army in the War of 1812, and and 1850 expansion more than doubled the Capitol’s size, including the addition of the iconic dome (88m/288 feet high, 30m/100 ft. in diametre and made with more than 4,000 tonnes of iron), crowned by a 6m (nearly 20-ft.) Statue of Freedom evoking the Greek goddess Athena. Though security has of course been tightened since the insurrection of 6 January 2021, visitor tours are also offered free of charge on weekend with advance reservations. 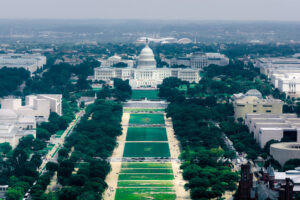 Stretching from the Capitol steps to the Lincoln Memorial three kilometres (just under two miles) away, this broad, park of tree-fringed lawns includes the Washington Monument obelisk (which you can free-of-charge, same-day tickets are available to take the elevator up to the top); the elongated rectagular Reflecting Pool; the Jefferson Memorial; the Martin Luther King Jr. Memorial; and various Smithsonian Institution museums such as the National Museum of American History, the National Gallery of Art, the Hirshorn, the National Air and Space Museum; the Museum of the American Indian, and the African American History and Culture Museum. 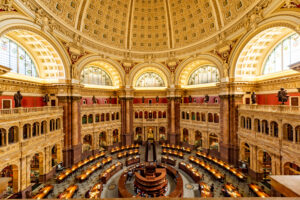 The Library of Congress

Established in 1800 and primarily housed in four buildings, this august institution possesses more than 32 million printed books and other publications in 470 languages; North America’s largest collection of rare books; millions of precious tomes, manuscripts, maps and documents like  a Gutenburg Bible and the rough draft of the Declaration of Independence; and yet more millions of still moving images as well as sound recordings. In addition, the LOC hosts numerous temporary exhibitions as well as events, workshops, and symposia. Visitors focus on the Beaux-Arts Thomas Jefferson Building, inaugurated in 1894 and open to them Tuesday through Saturday with timed-entry passes that need to be reserved in advance. 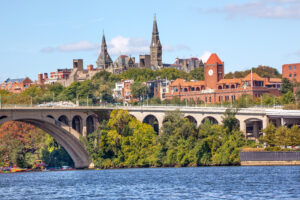 Originally its own independent town, founded in 1751 in Maryland – before the creation of the District of Columbia – and not incorporated into the Distric until 1871, this genteel and utterly charming neighbourhood a 15-minute drive west of Federal Triangle monuments and museums has a very different feel to the rest of DC, with much of its red-brick architecture dating from the colonial era of the 18th century. Besides just wandering its picturesque streets and lanes, highlights include Dumbarton Oaks with its stately Colonial-Revival mansion and lovely landscaped gardens both open to the public; the C&O Canal, complete with canal boat rides);  and prestigious, Jesuit-run Georgetown University, one of the USA’s top and oldest (est. 1789) institutions of higher learning.

In addition, the city is packed with delicious restaurants with a wide range of international cuisines; a hopping nightlife; and alt neighbourhoods such as Adams Morgan. So if you’re looking for a fulfilling summertime destination, take advantage of Iberia’s seasonal service to Washington DC (at the moment just 277 euros from Madrid) for a truly capital experience!