Apart from being a girl’s best friend, if you know your basic chemistry/geology, you known that diamonds are basically crystallised carbon. They’re formed far beneath the Earth’s crust, at least 160 kilometres (99 miles) underground in the mantle. at temperatures of more than 1,000⁰ Celsius (1,832⁰ Fahrenheit) and at pressure of around 60 million millibars (at sea level it’s a mere 1.014) – although some with impurities can form just 80km (50 mi.) down and at less than 400⁰C (752⁰F). All this is estimated by geologists to have occurred around 400 million years ago – though some believe it might go back far longer, as much as four billion years (the entire age of the earth is now estimated at around 4.6 billion). At those unimaginable depths, temperatures, and pressures, it’s the Earth’s internal movements and vocanic magma which brings diamonds near the planet’s surface where they can be mined. 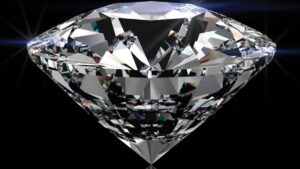 Fascinating, to be sure, but what does all this have to do with aviation? Well, the most modern commercial aircraft, such as the Airbus A350‘s used by Iberia among many other airlines for their long-haul routes, contain large amounts of carbon which is, like the carbon in diamonds, subjected to elevated temperatures and temperature levels, though not to such an extreme extent.

Concretely, this form of carbon is one of the softest: graphite, not unlike that used in pencils, which is treated to form polyacrilonitrile, the same type of molecule used in the manufacture of acrylic clothing and other products such as tents. It’s treated to form carbon fibres which embedded in polymer materials formed into rolls or sheets which are stronger than steel but a fraction of its weight. 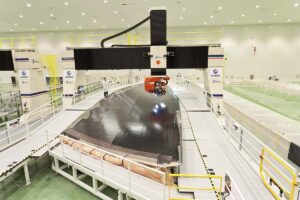 Constructing an aircraft with carbon fibre involves different processes, depending on the type of fibres. The simplest is to use a mold of the aircraft component desired, in which successive layers of carbon fibre are added. Others use machines which knit carbon-fibre ribbons together at different angles to achieve the desired levels of resistence.

Once the part is produced, however, it’s still not yet ready to be installed, because first it needs to be “cured”, that is, subjected to a process not unlike those which create diamonds: applying various elevated pressures and temperatures. This is accomplished by placing the piece in a vacuum-sealed container which is in turn placed in a kind of oven called an autoclave. There, depending on the type of fiber and piece, it’s baked at varying temperatures and pressures – usually below 200⁰C (392⁰F) and pressure around 4,000 millibars (about four atmospheres). During this time, the epoxy resin that impregnates the fibre hardens while the excess is expelled. 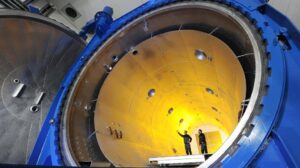 At this point it’s worth noting that Spain is one of the countries who aeronautical industry has been a pioneer in the development of carbon fibre. For example, today one of primary manufacturers of machinery used by the large aircraft makers is Navarre-based MTorres, whose aeronautical division employs some 400 workers 63 percent of whom have university degrees.

And by the way, when we refer to “aircraft makers”, we’re not referring just to companies like Boeing or Iberia’s longtime partner Airbus, but also to companies which work with and for them, such as the Spanish companies Aciturri and Aernnova. The A350 wing section is 32 metres (105 feet) long and 6m (2o ft.) at its widest and it’s manufactured in a single piece despite its complexity, with curved areas. It is the largest single piece used in an aircraft, except for the wing of the Swiss solar-powered aircraft Solar Impulse, which is more than 60m (197 ft.) long.