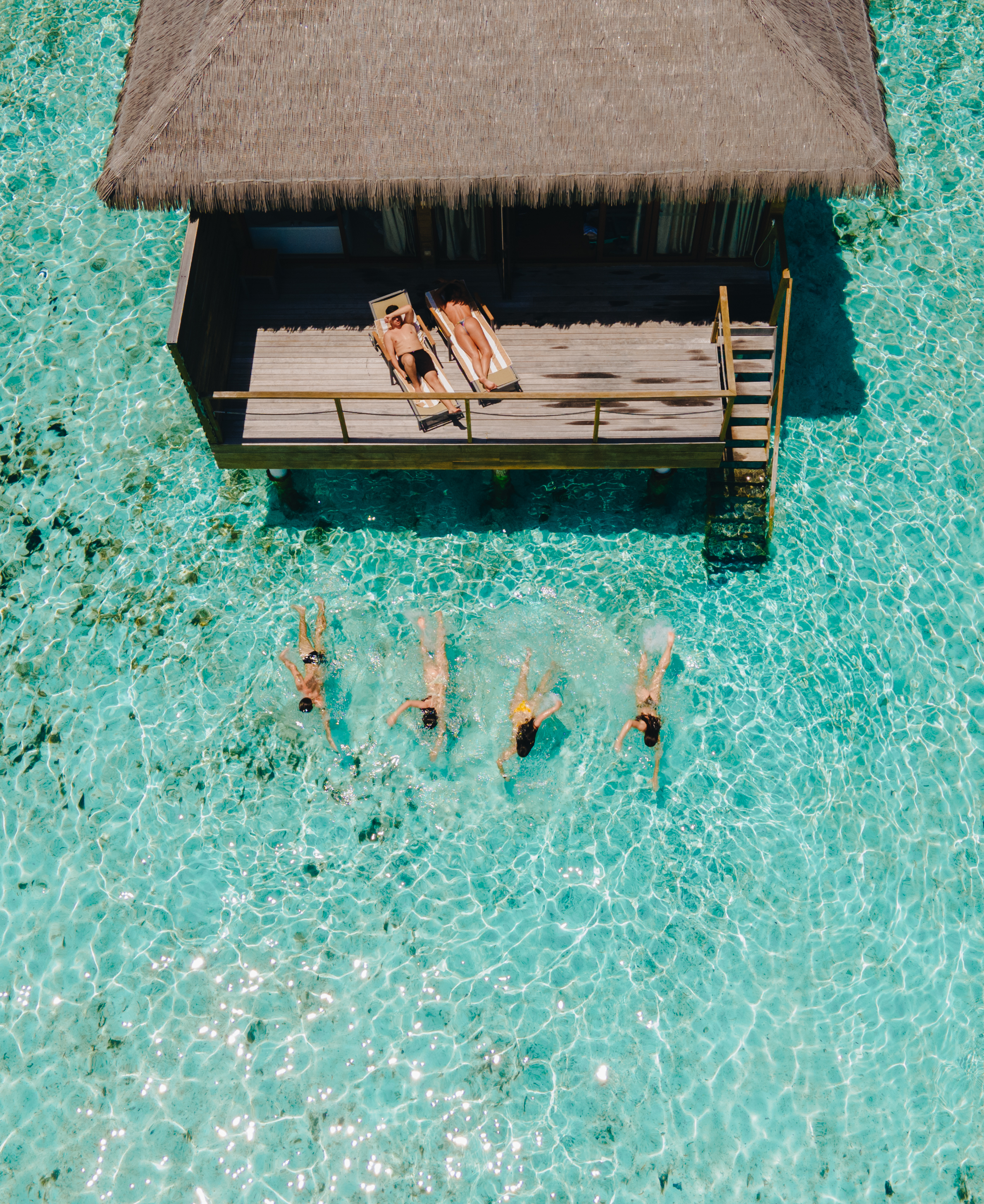 Out in the Indian Ocean, some 800 kilometres (497 miles) south of Sri Lanka, the Maldives are comprised of 1,191 islands, including 26 coral atolls (just over 200 are inhabited with an uncommonly friendly people, with the most notable including Bandos, Dhiffushi, Dhigufinolhu, Kaashidhoo, Maafushi, Malé (home to the country’s eponymous capital), and Thulusdhoo.

This archipelago has become of of the most most sought-after paradises in the world. Temperaturea are always balmy, ranging between 25 and 30 degrees, and crystaline turquoise lagoons, powdery white-sand beaches, and colourful reef await.

But for travellers also interested in looking beyond all that, there’s also a trove of culture and history formed by human activity here dating back more than 2,000 years. 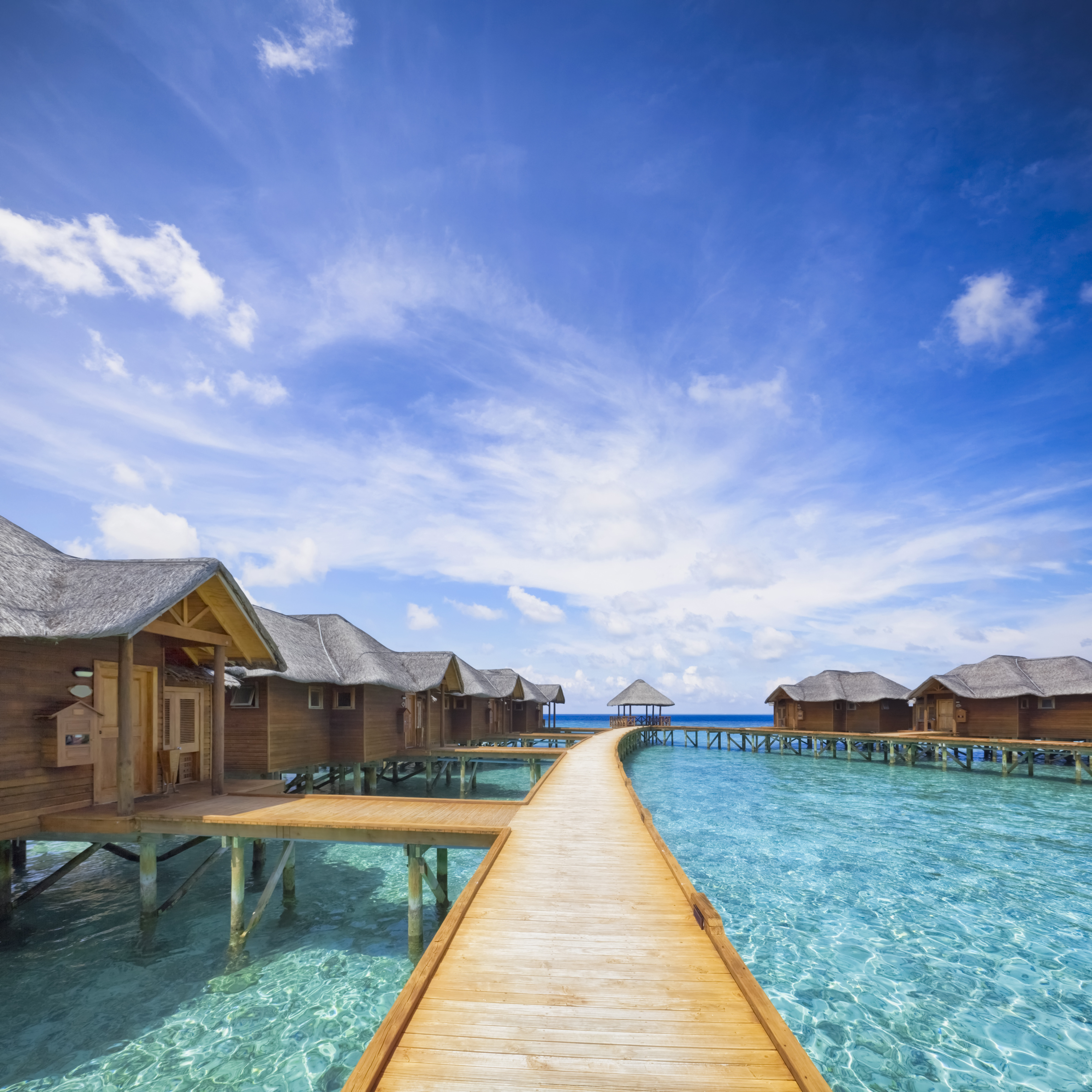 A Bit of Maldives History

Though used as far back as 4,000 years ago as a resting and resupply stop on the sea routes of ancient Egyptians, Chinese, and Mesopotamians, this archipelago began to be permanently settled in the 4th century BCE by Tamils from what are today Sri Lanka and southwest India (the Maldives’ nearest neighbours). Naturally they brought their culture with them, including Dhiveni, today this country’s official language and of course their religions – first Hinduism, then Buddhism, which held sway until the 12th century, when the influencce of Arab traders led the Maldivian Buddhist king to convert himself and his subjects to Islam.

Then, beginning in the mid-16th century, came the period of domination by European powers – first the Portuguese, then the Dutch, and finally the British, who made the Maldives a protectorate in 1796 but allowed it to be largely ruled by its traditional sultans except in matters of foreign relations. The archipelago finally achieved full independence in 1965 and became a republic in 1968.

With an economy still largely driven by small-scale fishing, another great transformation occurred just four years later with the construction of the first resort, launching an era of upmarket, beach-oriented tourism that has made the Malives one of the most prized luxury destinations in the world.

But beyond the beaches, here are several things to appreciate about this country’s interesting and fairly unique culture.

Sunni Islam is the Maldives’ official religion, and it’s interwoven into much of society, including politics and economics, and for example the consumption of alcohol is forbidden throughout the country (though it remains available in various hotels and resorts catering to foreigners). Whereas Sunday is traditionally the day of rest in the West, here it’s Friday, with many businesses closed, and many Maldivians go to work on Sunday. Nonetheless, the practice of Islam is moderate here, with radicalism an insignificant factor 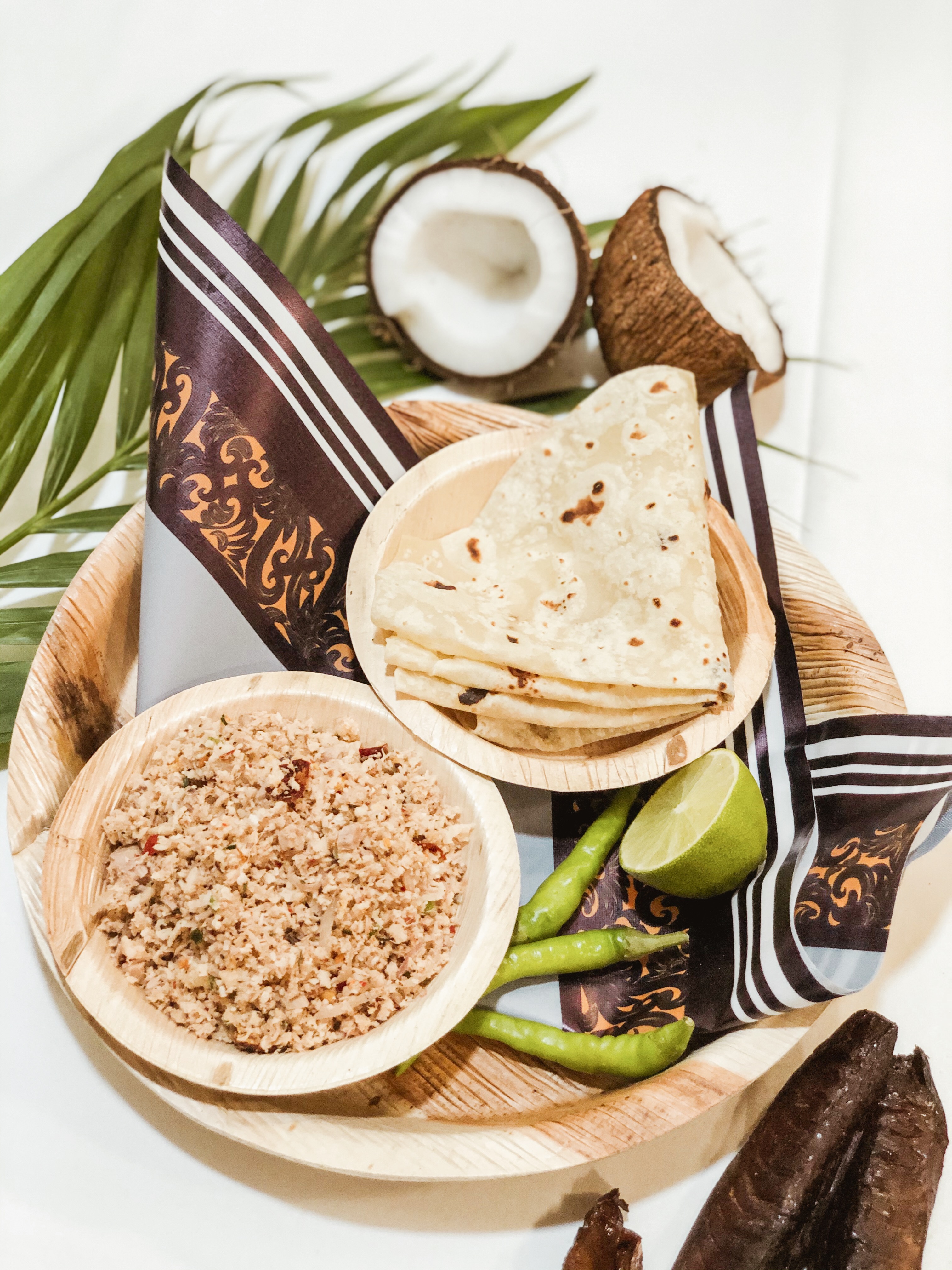 Maldivian cuisine is an excellent example of this society’s multicultural influences, above all that of south India and Sri Lanka (whence came its original inhabitants) – and especially when it comes to spicing and spiciness. Common ingredients include tuna, onion, coconut, and curry, along with fruits imported from Sri Lanka such as pineapple, mango, and papaya.

One popular staple of mashuni (breakfast) here is roshi (similar to Indian roti) stuffed with a blend of coconut, tuna, onion, and chili peppers, dressed with lime juice. Other typical dishes throughout the rest of the day include curried noodles with vegetables; tuna and rice; and fish with veg. On special occasions you’ll also see arudia, a fish-and-rice soup with peppers and cooked lemon, and kuli boakiba, seasoned tuna cakes.

For in-between snacks there’s finihu más (fish in a marinade of spices including cumin and chili peppers), and fried fish balls like gulha and kavaabu.

Plenty of choices for a sweet finish, too, such as bis hulavuu (slices of thick custard cooked up with eggs, sweetened condensed milk, and ghee), bodibaly (made out of rice and sugar), and huni hakaru folhi (a kind of steamed turnover stuffed with coconut seasoned with cinammon and cardamom). 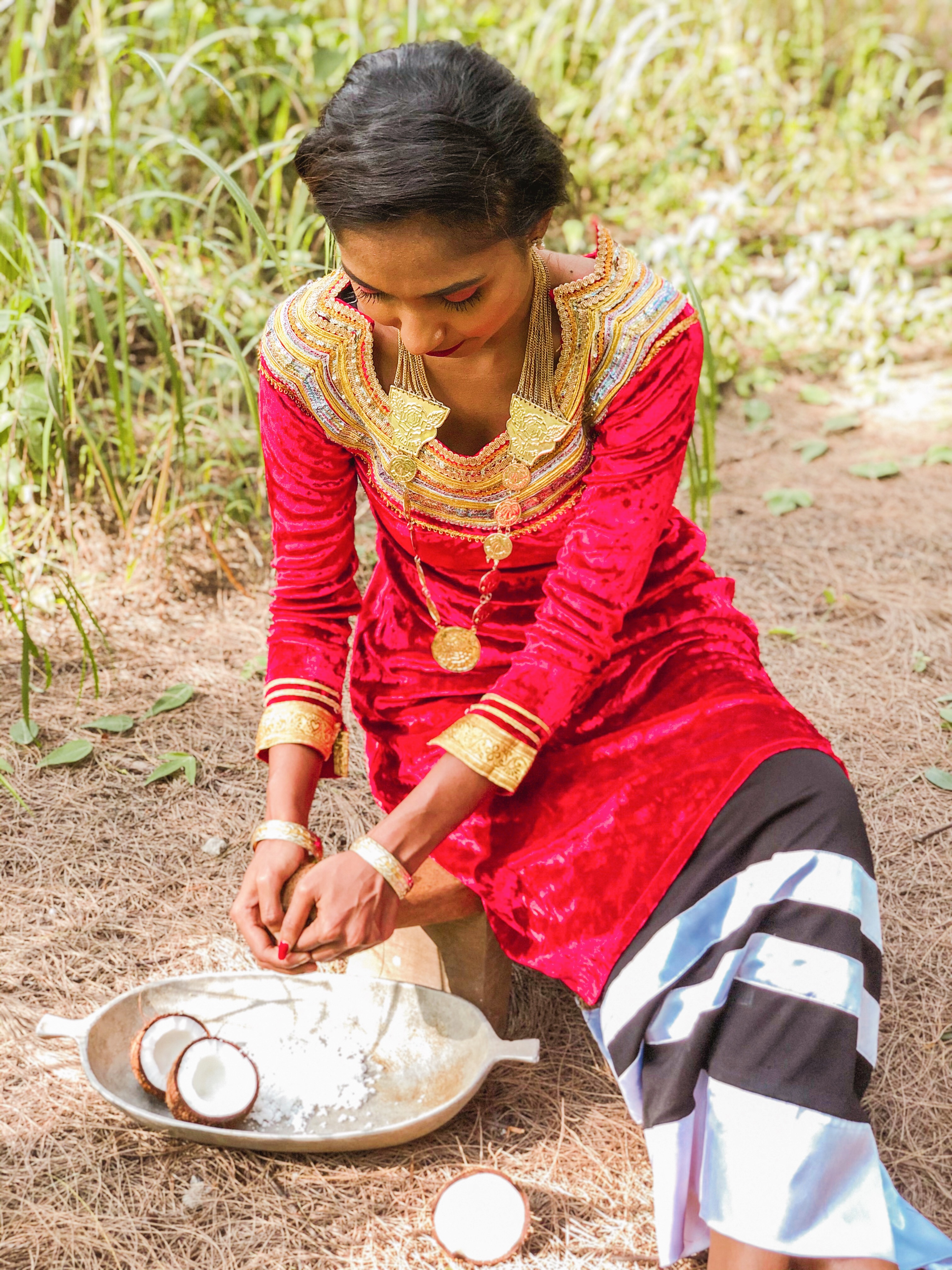 Taught from from generation to generation, Maldivian handicrafts tend to use materials such as coral (though endangered black coral is prohibited); coconut palm leaves, shells,  and fibre (called coir); reeds and cane; seashells; and wood, among other natural materials.

One particularly notable practice on the southern islands is the weaving of thundu kunaa mats from out of hai (reeds), in which the reeds are cut, dried in the sun, and laboriously woven together. Up north, a less labor-intensive variation called saanthi involves pine needles woven together, dyed, and used as decoration on beds and chairs. A third very typical craft is ladjehun, little wooden boxes which are lacquered and artistically adorned with brigh colours and floral motifs (the best known are made on Thulhaadhoo island in the westerly Baa Atoll.

Maldivian clothing of course also makes good mementos of your visit. Generally, local attire – usually cotton thanks to the hot weather – tends toward the fairly conservative, in line with Muslim teachings. That’s especially true for women, with care taken to cover shoulders and ankles; their traditional dress is called the libaas, with collars embroidered with gold, silver, and various colours,  and these days reserved mostly for festivals and other special occasions, as well as folkloric dance performances. Guys, meanwhile, tradutionally wear white long-sleeve shirts and mundu, sarong-like lengths of fabric worn around the waist and hanging down to cover the lower body.

The best known on the music-and-dance front is East-Africa-influenced bodu beru (“big drums”), played at night; centred around drumming; and accompanied by hypnotic dancing that gradually builds up to a frenzied pace. Other dances and music genres, meanwhile, are influenced by Arab and Indian culture 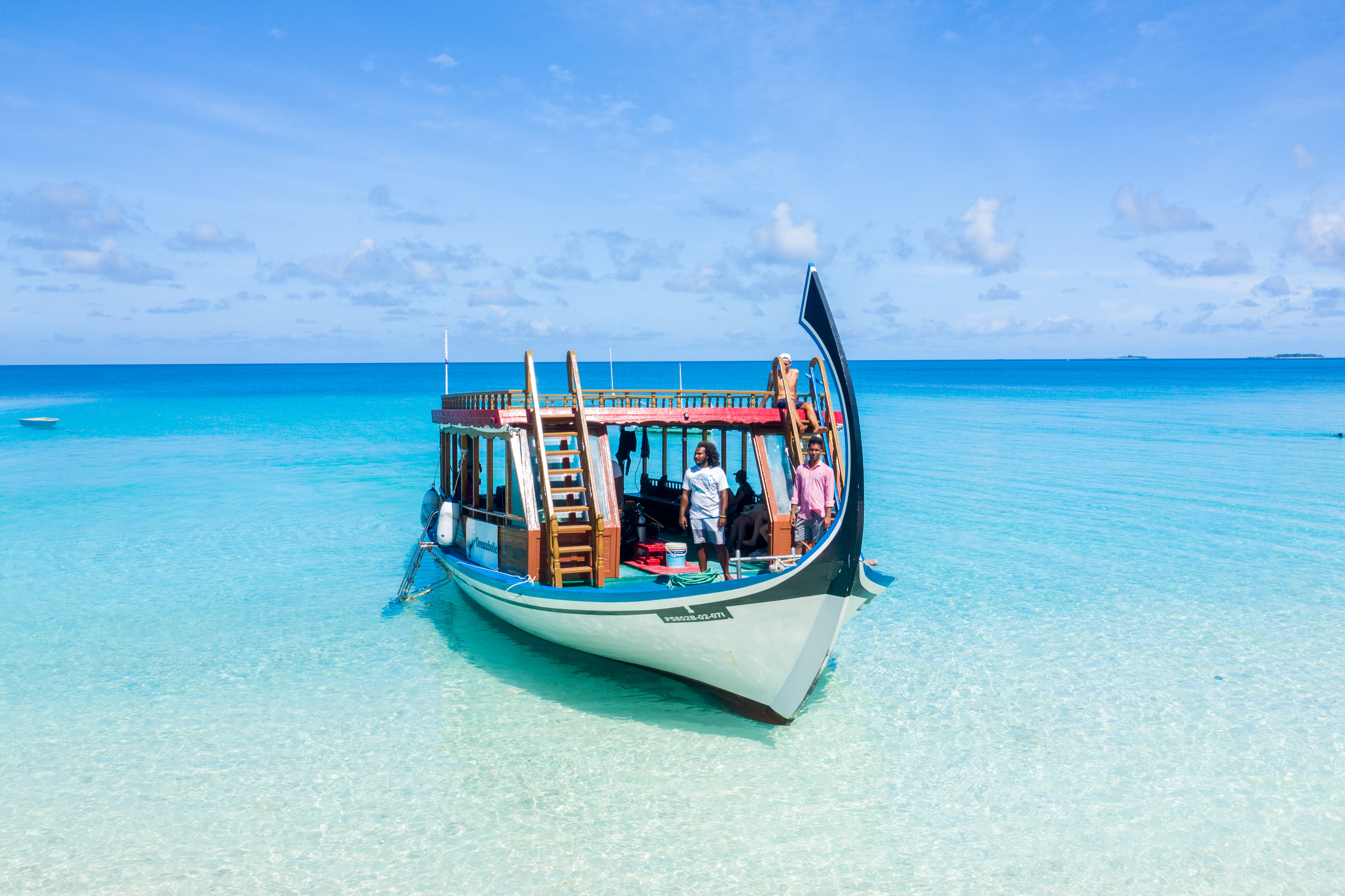 These nearly 1,200 islands are spread across 298 square kilometres (115 sq. miles), and while several of the closer-together ones are connected by causeways, for the rest there is an affordable network of public ferries. These can take some time, however, so faster (and of course pricier) options include speedboats and seaplanes.

Otherwise, there are also the dhonis, traditional wooden sailboats used for fishing and these days many of which are also heavily involved in tourism, for sport fishing, snorkelling/diving, and pleasure cruises (and nowadays many are also motorised and made of fibreglass).

Keep in mind when you travel here that the Maldives observe some 30 public holidays per year, most notably Independence Day on 26 July, commemorating the end of British rule; National Day in the fall (this shifts, with this year’s day being 7 October), marking the ejection of the Portuguese in 1573; Victory Day (3 November), commemorating the thwarting of an attempted coup in 1988; Republic Day (11 noviembre), to mark the anniversary of the establishment of republican government in 1968; and the Day of the Fisherman on 10 December, honouring the members of this key national mainstay.

Intrigued? Check out Iberia’s affordable fares (from 600 euros round trip), and get more info at VisitMaldives.com.