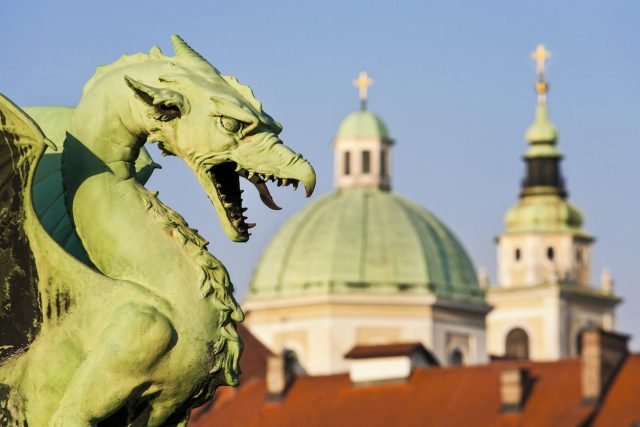 One of our newest destinations, halfway between Vienna and Venice, also happens to be one of Europe‘s smallest capitals. with a population of around 296,000. But what it lacks in size it makes up for in spades in charm, especially in its picturesque old town, Staro Mesto Jedro, replete with elegant fin-de-siècle Habsburg architecture; presided over by an imposing hilltop castle, the Ljubljanski Grad; and separated from the newer part of the city by the Ljubljanica River. Another local quirk is that for all its tranquility and affability, for centuries Ljubljana has also considered itself “the city of the dragon”, and images of these fire-breathing lizards are everywhere. Read on for both the why and the what! 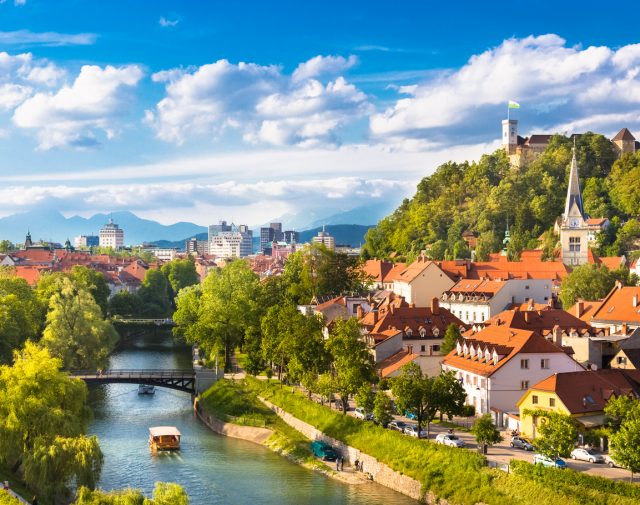 
They start with the Old Town’s charming architecture, largely in the Vienna Seccession style (a Habsburg variant of Art Nouveau) built at the end of the 19th and beginning of the 20th century and spearheaded by architect Jože Plečnik. Top landmarks of his include the Tromostovje (Triple Bridge), the Shoemakers’ Bridge, the Central Market, the National University Library, the Križanke Summer Theatre, and the funeral-vault complex in Žale Cemetery.

There’s even a fair bit of nature to enjoy within city limits – in fact, Ljubljana is so green-friendly in terms of policies and facilities that it was named 2016’s Green Capital of Europe. Its most prominent parks include Miklošič, built in Art Nouveau style in the first decade of the 20th century; the 211-year-old botanical gardens, with more than 4,500 plant species thriving on two hectares (five acres); and the largest and most important of all, Tivoli, its 510 ha. (1,260 ac.) landscaped with broad promenades; lovely flower gardens;  nice woodsy patches; statues; and a rectangular pond.

(Incidentally, an awesome way to appreciate Liubljana and its beautiful natural setting is to take to the river on a standup paddle board, kayak, or canoe, passing under its three bridges and gazing up at the Old Town, crowned by the imposing castle.)

And all along the way, you’ll also bliss out on the tasty local cuisine served at numerous restaurants and beer halls at all price points, with stars including kranjska klobasa (Carniolan smoked-pork sausage), often served with sauerkraut, mustard, and crusty bread; goulash-like bograč, a stew of pork, beef, venison, and boar simmered with potatoes, onions, spices, wine, and sometimes mushrooms; and potica, rolled-up pastry filled with ground walnut paste and sometimes raisins or other fillings including poppyseed and hazelnut. 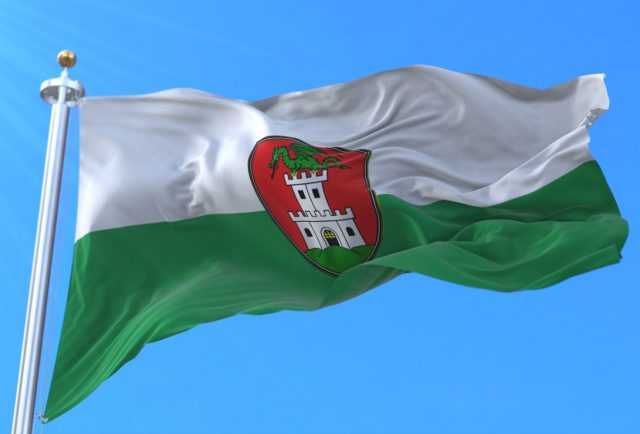 OK but back to those winged, firebreathing lizards. The origin of their connection with Ljubljana stretches back into Greek mythology – specifically the tale of Jason and the Argonauts, who stole the Golden Fleece from the shore of the Black Sea and on their circuitous odyssey home ended up making camp for the winter near the source of the Ljubljanica River, and came across and defeated a dragon living in a nearby lake.

Since then this rascally reptile been present in every corner of the city – from statues to iconography, the city coat of arms, and even the Slovenian national flag (above) – representating power, courage, and grandeur. 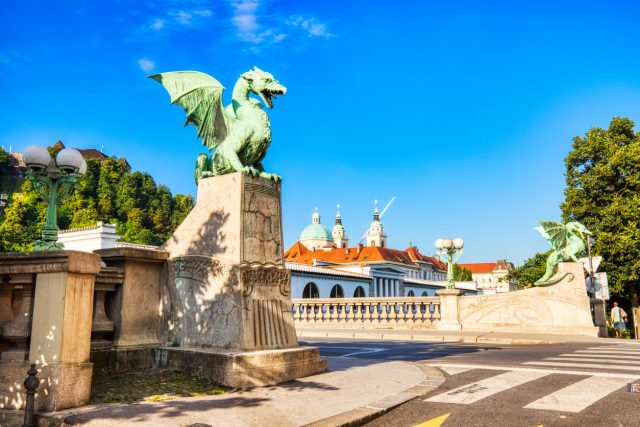 One of the main places you’ll see Puff the Slovene Dragon is on Zmajski Most (Dragon Bridge), the city’s first concrete bridge – and at the time also one of the longest in Europe – built in 1907 when Ljubljana was part of the Austro-Hungarian Empire. Its graceful Vienna Secession design by Jurij Zaninović includes four green-copper dragons (along with 16 smaller dragon figures) which quickly became an icon of the city. 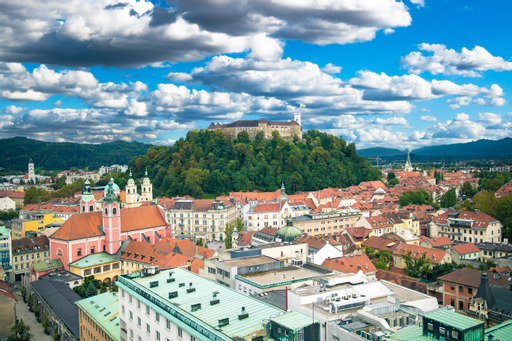 And by the way, especially if you’re an escape room fan, one quirky dragon-themed attraction not to miss is “Escape Castle“, an hourlong experience that serves up five fun “trials” to locate Ljubljiana’s dragon mascot, which has gone missing.

So learn more about this fetching little capital of Europe at its tourism authority page, then book a very affordable flight on Iberia – you’re in for a real treat!