The landscapes of South America‘s fourth largest country –  more than five times the size of the United Kingdom and more than twice that of Texas – are amazingly varied, encompassing tropical jungles, temperate forests, plains, steppes, soaring Andes peaks, glaciers, deserts, wetlands, and beaches/coral reefs, among others. And all this is home to some of the planet’s most wideranging biodiversity (in some case, the most, as with bird and orchid species). Its president commented not long ago that “biodiversity is to Colombia what oil is for the Arabs”, and furthermore, the importance of preserving this land’s natural wealth has mostly been prized by the various cultures that have contributed to the national identity as far back as 7000 BCE.

So today in 2021, this astonishing eco legacy is an integral part of the appeal of this country to its millions of annual visitors, including nearly 60 nationally designated protected areas. Here’s just a little taste of several of its top ecosystems: 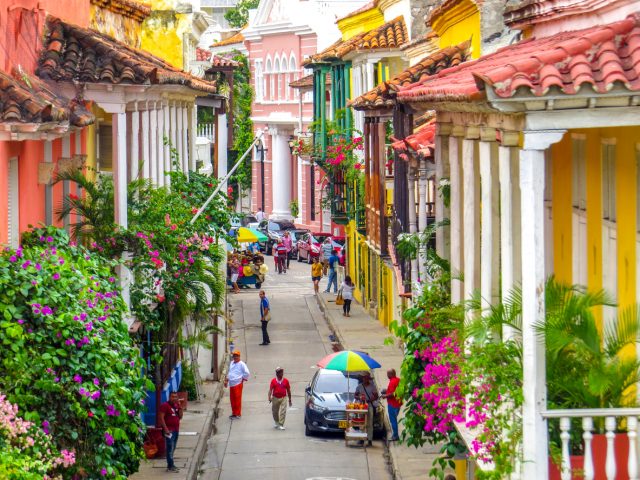 Beyond paradisiacal beaches such as Playa Blanca, El Pilón de Azúcar, and the powdery sands of Providencia Island, the eight departamentos along Colombia’s Caribbean coast are home to areas as diverse as the island of San Andrés, bathed by an extraordinary  seven-colour sea; the exuberant greenery of Tayrona National Park, with a view to the snowcapped peaks of the Sierra Nevada de Santa Marta (including South America’s highest, Punta Gallinas) and whose jungles reach to the sea; and the Taroa sand dunes of the departamento of Guajira, at South America’s northernmost tip (sandboarding, anyone?).

Along with all these natural wonders, the Caribbean region is also well worth exploring for its human legacy – incredible archaeological sites such as the mysterious Ciudad Perdida (Lost City) along with various cultures including precolumbian ones such as the Wayú, Kogi, and Zenú, as well as Afro-Colombian communities like the raizales and palenqueros. And most especially some of the world’s best conserved Spanish colonial architecture in Mompox, Lorica, and most famously the splendid old quarter of Cartagena, a UNESCO World Heritage Site.

Along with all this comes an extraordinarily rich culture, from the enormous pre-Lenten Carnaval (the world’s second largest after Rio de Janeiro‘s) held each February or March in the city of Barranquilla near Cartagena to music and dance forms such as vallenato, cumbia, and porro.Indeed, you could argue that of all the destinations in and bordering the Caribbean basin, Colombia’s is the richest and most diverse. 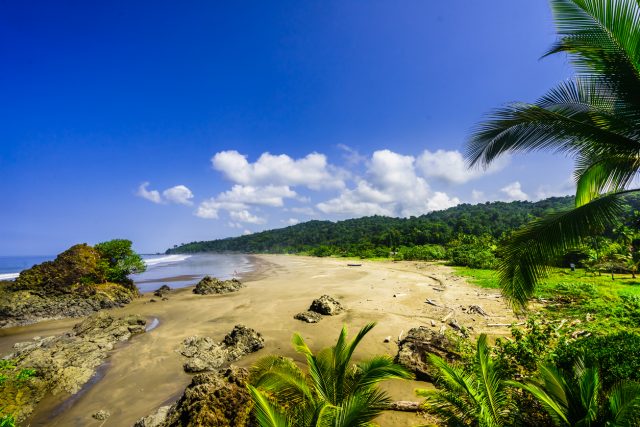 Like the Caribbean inhabited by high numbers of Afro-Colombians, yet less well known and more isolated, this natural paradise stretching between the Panamanian and Ecuadoran borders includes wild, ancient jungles; breathtaking waterfalls tumbling from majestic peaks; and long, wide stretches of beautiful – and largely empty – beaches such as Playa Almejal (above) and Playa Nuquí.

The Colombian Pacific is also marvelous for spotting rare wildlife, as well, for one because it’s on the migratory routes of, for example, humpback whales who undertake epic journeys to Bahía Solano to birth their calves, as do giant sea turtles who lay their eggs on its dark-sand beaches and hatch several months later for a mad dash into the ocean. Another remarkable spot is tiny, very rocky, and largely uninhabited Malpelo Island, home to more than 100,000 Nazca boobies, endemic to this part of the Pacific (and, by the way, whose skin is sometimes pecked at by the luridly named vampire ground finch, native to the Galápagos Islands, to feed on their blood). But Matapelo is marked as a UNESCO World Heritage Site because it also harbours hundreds of sharks, including silky sharks, the very rare smalltooth sand tiger, and most notably more than 500 hammerheads).

What’s more, the region is on its own one of the world’s most biodiverse – with nearly half of all the species found in Colombia – for example, 838 identified in the nature reserves of the north-Pacific-coast departamento Chocó, and ten of those endemic to this area.

And when it comes to human animals, this coast and its hinterland is also distinguished by the culture of Colombians descended from African slaves brought to the colonial-era New Kingdom of Granada beginning in the 16th century. Besides the physical features of its people, this is also reflected in musical forms such as cumbia, marimba de chontas and currulao, as well as local culinary specialities – especially when it comes to seafood – like fish aborrajados (patties), crab pies, clam rice, pusandao (catfish broth), quebrao (a soup/stew of salted mountain beef jerky), and seafood casserole and salads. And cities like large Buenaventura and Tumaco as well as smaller Guapí are the places in which to experience all this to its fullest.

Nonetheless, the Colombian Pacific’s most prominent city is the country’s third most populous, Cali, also home to many Afro-Colombians and vibrant of culture and cuisine – along with buzzy nightlife. And speaking of culture, interestingly, although it’s usually associated more with the Caribbean, salsa is huge here – so much so that Cali has for some years now been know as the “world capital of salsa”, not only with a large number of clubs,  schools, and other venues devoted to this infectious mujsic and dance form, but also major events like the World Salsa Festival, the Petronio Álvarez Pacific Music Festival in August, and the late-December Feria de Cali. 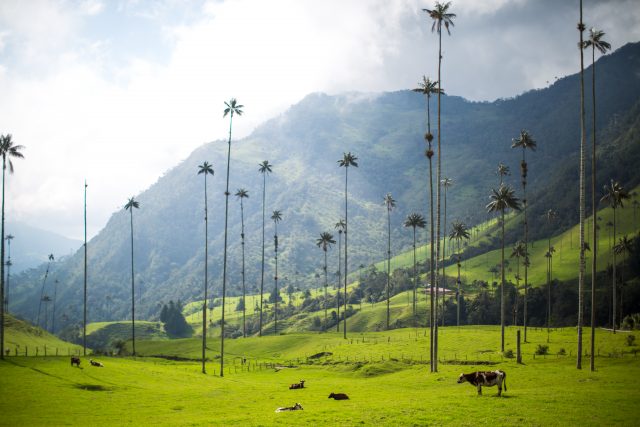 The region that embraces the vibrant, modern city of Medellín along with its neighbours to the south offers a stunning landscape of majestic mountains; extraordinarily colourful towns;  crystal-clear rivers; exotic birds; and flower-packed valleys.

With a delightfully mild, springlike climate and voluble locals known as paisas, in these mountains of coffee and flower cultivation, one of the highlights is to puebliar along the so-called “Network of Heritage Towns“, including the charming likes of Jardín, Jericó, Salamina, and Santa Fe de Antioquia, known for their picturesque Spanish-colonial architecture. Other notable local pursuits include biking, adventure sport, and ecotourism.

Medellín, meanwhile, has largely left its notoriously drug- and violence-plagued past behind to become a city where tradition lives on in harmony with modernity and urban innovation. The “City of Eternal Spring” is known for its culture (especially the paintings of native son Fernando Botero); fashion; buzzy nightlife; dynamic dining; flower growing (and one of the world’s most prominent annual flower festivals), and groundbreaking infrastructure like the public escalators and cable cars that serve the hillside communities along its flanks.

Meanwhile, the region’s second largest city, Pereira, lies at the heart of Colombia’s so-called “Coffee Axis“ (also designated a UNESCO World Heritage Site for its “coffee cultural landscape”), with other prominent coffee towns including Manizales and Salento.  Other highlights of coffee country are the Cocora Valley (above) amidst the perpetually snow-capped peaks of the Los Nevados National Park and home to the wax palm, an endangered species that’s Colombia’s national tree; Guatapé, a huge, narrow hill dramatically rising from the countryside a couple of hours from Medellín; and the fast flowing La Miel River, halfway between Medellín and Bogotá, popular for tubing as well as horseback riding amidst the surrounding greenery. 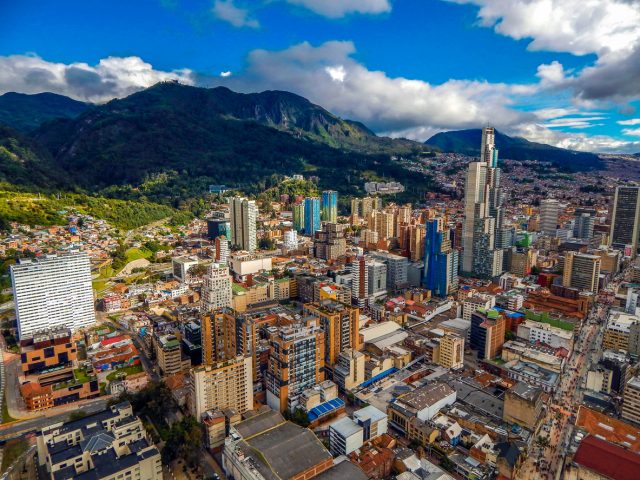 Perhaps Colombia’s core region and its single best example of the balance between tradition and modernity, it extends northward from the sprawling highrise capital Bogotá (above), with its rich cultural, culinary and nightlife menu, to little colonial towns like Barichara and Villa de Leyva, as well as singular attractions like Zipaquirá, an amazing salt mine with its own cathedral and other features (really).

This region was where Spanish colonisation first took hold, and where the myth of El Dorado originated. It’s a land of mountains, high tundra, and valleys, including impressive nature reserves such as El Cocuy, home to the country’s largest glacier mass, with 25 ice-covered peaks and 150 lagoons; Chicamocha Canyon, 227 kilometres (141 miles) long and deeper than the Grand Canyon – up to 2,000 metres (6,600 feet) – and a hub for adventure activities such as rock climbing, whitewater rafting, paragliding, and bungee jumping; and Chingaza, known for its own glacial lakes as well as being a centre of precolumbian peoples like the Muisca and Guayupe. The Magdalena River Valley, meanwhile, is popular among Colombians and foreign visitors alike for birding and biking. 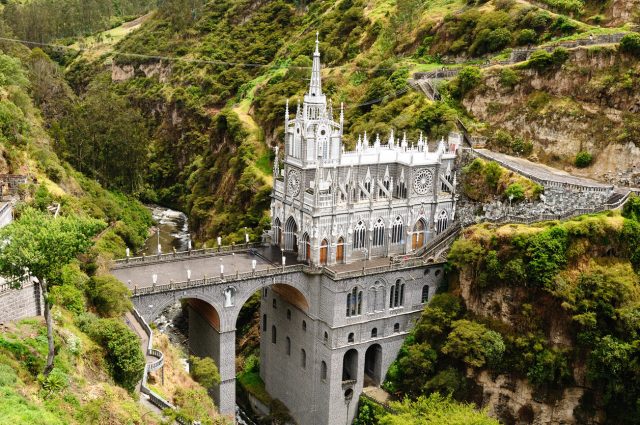 Also known as the Nudo de Almaguer, this mountainous region about the size of South Carolina and significantly larger than Wales, is the source of some of Colombia’s most important rivers (and drinking water) as well as much of its precolumbian origins, such as the San Agustín culture, with enigmatic statues and underground tombs found in the San Agustín and Tierradentro archaeological parks. Today the descendants of those peoples can also be visited here in communities like Sibundoy and Silvia, which still keep the their ancestral traditions alive.

The massif’s varied geography, meanwhile, includes high alpine tundra, volcanoes (particularly in Puracé National Park), the Tatacoa Desert (actually a tropical dry forest which is a perfect venue for the stargazing of “dark skies” tourism); the La Cocha Lagoon, a volcanic, fauna-rich crater lake;  and spectacular waterfalls such as the Fin del Mundo (“End of the World”), the Salto del Mortino, and the Salto de Bordones.

There are also several remarkable historical spots worth visiting up here, on the order of the Spanish-colonial core of Popayán, known as the “white city” because of the colour of its historic architecture, dating back as early as the 16th century (also declared UNESCO’s first “City of Gastronomy” because of its culinary heritage and its impressive Easter week religious processions also on the list of UNESCO Intangible Cultural Heritage of Humanity). Another is the spectacularly sited Sanctuary of las Lajas (above), a neo-Gothic minor basilica built over several decades of the first half of the 20th century 45 metres (148 feet) over a river gorge down near the border with Ecuador. 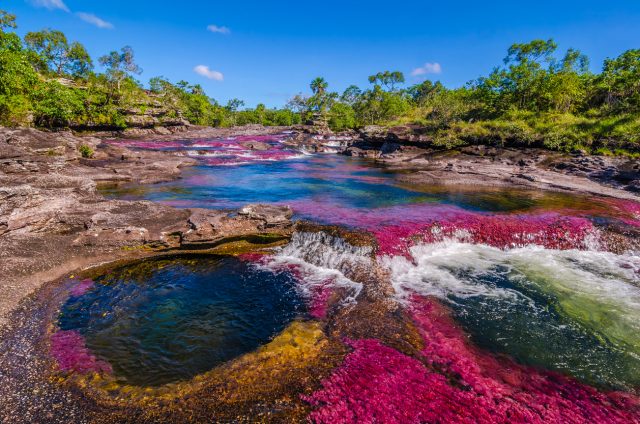 Also known as the Eastern Plains and centred around the world’s fourth largest river by volume, the Orinico, it’s a wild region not just of impressive rivers but also of big sky, ancient forests; thundering waterfalls; epic sunsets; an enormous variety of flora and fauna; and huge hatos (estates) on vast plains with a frontier llanero culture redolent of cattle, horses, coleos (rodeos), and joropo (the local musical style drawing from African, precolumbian, and European influences). To the south, the plains give way to the untapped and pristine forests (the largest in South America) of the Amazon basin, and the Amerindian peoples who inhabit them.

Top spots not to miss here include the Serranía del Chiribiquete National Park, Colombia’s biggest at 43,000 km2 (17,000 sq. mi.), named after the Chiribiquete mountain range and also including surrounding tropical moist forests, savannas, and rivers. They’re home to more than 1,800 species of plant life and more than 1,000 of animals including giant otters, ocelots, cougars, toninas, and jaguars. It’s also home to the Americas’ largest collection of rock art – painting and petroglyphs – some of which date as far back as an astonishing 20,000 years.

Another amazing nature spot not to miss here is the Raudal de Jirijirimo, a national park named after its central feature, an astonishing waterfall in the form of gigantic steps, a total of 100m (328 ft.) wide and nearly 100 high. But perhaps most notable of all is a river considered among the world’s most beautiful: fast flowing Caño Cristales (above), dubbed “the river of five colours” and “a liquid rainbow” thanks to the  yellow, green, blue, black rocks on its riverbed as well as the red plants growing thereon.

So as you can see, for lovers of both nature and culture, Colombia is a treasure chest that would take years to experience. Come book a (surprisingly affordable) flight to Bogotá and see for yourself!