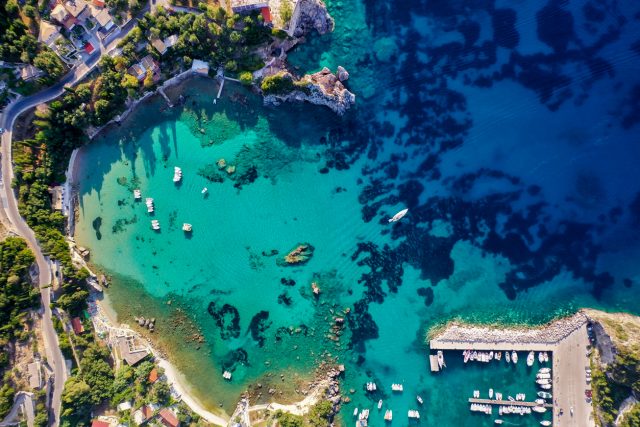 Known to Greeks as Kerkyra, one of Greece‘s easternmost islands is located in the Ionian Sea to the west of the mainland rather than the Aegean to the east, and just a short hop offshore from the Greek border with Albania. For millennia, Corfu has been an inextricable part of Hellenic history and classical mythology (for example, site of momentous deeds of Zeus, Poseidon, Odysseus, and Jason and the Argonauts). In the era of modern tourism, of course, its main allures are its stunning beaches, but one of the beautiful things about this 611-square-kilometre (236-sq.-mile) bit of Mediterranean real estate is that it also provides a full and fascinating menu of history, nature, dining, and nightlife to make your holiday a truly multifaceted marvel.

Too many to visit on one trip – some 130 along 217km (135 mi.) of coastline – Corfu’s alluring sands and cool, calm, crystalline waters range from popular and full service to delightfully secluded and pristine (depending on your tastes, of course). Tending toward sandy on the west coast and more pebbly on the eastern side, top names include Agios Geordios, Agios Stefanos, Halikounas, Loggas, Porto Timon, and Rovinia. You can learn more about your many options here, but to get you started, here are my own three favourites, all on the northwest coast:

Located in the village of the same name, the so-called “jewel of Corfu” (top) is actually seven sandy strands and coves separated by small promontories. Most have a full menu of water sports and water craft rental as well as chair/umbrella rentals and refreshments. (Fun fact: this stretch is purported to be where the Greek mythological hero Odysseus was shipwrecked on his way home to Ithaca after the Trojan War.)

This Blue-Flag beach* just a TK-minute drive from the island’s capital Corfu Town, is another of the island’s most popular, with gentle surf; fine, tawny sand; and the full panoply of services from food, drink and lodging to plenty of water sports. (And by the way, the discreetly shielded northern end is nudist, if that floats your boat. ?)

For something a bit more secluded than the above, Chomi is a mix of coarse sand and pebbles; backed by soaring cliffs; features magical turquoise waters perfect for snorkelling; and most notably is accessible only via water taxi out of Paleokastritsa and other nearby villages. An atmospheric keeper, for sure! 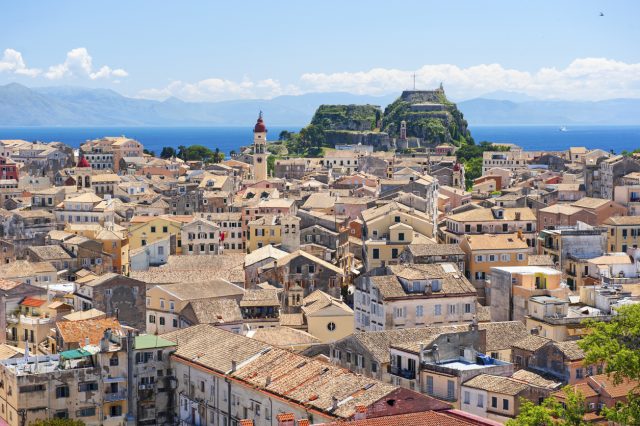 Speaking of Corfu Town, this capital of just under 40,000 has a history stretching back to to centuries BCE, when as Paleopolis it was at one point one of the greatest Greek naval powers. The old quarter we see now, however, reflects more than 400 years of rule by the Venetian Republic (1386-1797), as well as influences of rule by the ancient Romans (229 BCE-379 CE), the medieval Byzantines (562-1267), and later the French and the British for shorter periods. Its labyrinth of cobblestone streets – some too narrow for cars – is home to landmarks such as the Palace of St. Michael and St. George (built by the British in the early 19th century), the late-17th-century Venetian Town Hall; the late-16th-century  Church of St. Spyridon, home to the relics of the eponymous saint, the patron of Corfu; the 6th-century Old Fortress; the 17th-century New Fortress; and Spianada Square – the largest in the Balkans, adjacent to the Old Fortress and St. Michael/St. George. Some traces of the classical ancient past can also be visited, including the ruins of the temples of Artemis, Hera, and Kardaki just south of town. It’s all so remarkable that it’s on the list of UNESCO World Heritage Sites.

Other sites outside town and not far from Paleopolis which also merit a visit include the whitewashed, 17th-century Vlacherna Monastery, on a tiny, easily accessible islet; and the Palace of Achilleion in a village called Gastouri, built toward the end of the 19th century as a retreat for Austro-Hungary’s Empress Elisabeth (aka Sisi); it’s neoclassical in style and adorned with statuary and other evocations of ancient Greece. 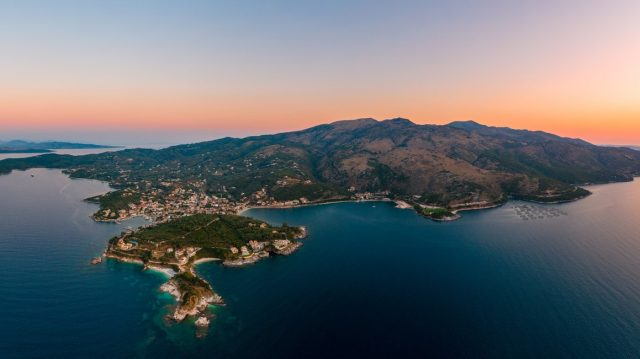 Unlike many Greek islands, Corfu is green all year round. With landscapes of mountains, valleys, and vineyards in the north (including its highest peak at 906 metres/2,972 feet, Mt. Pantokrator), rolling, densely green hills in the more populated middle, and fertile plains down south, it offers plenty of opportunities for both high-quality ecotourism and adventure activities.

There’s a healthy agrotourism scene (staying in farmhouses and other rural lodgings) as well as areas such as pristine Arkoudila forest, the Alikes wetlands, and Korission Lagoon (home to pink flamingos along with myriad other bird species). Plenty of hiking trails, too, including the 220km (137-mi.) Corfu Trail crossing the entire island.

On the adrenaline front, the most popular activities hereabouts including kitesurfing, windsurfing, sailing, kayaking, horseback riding, and cycling/mountain biking. 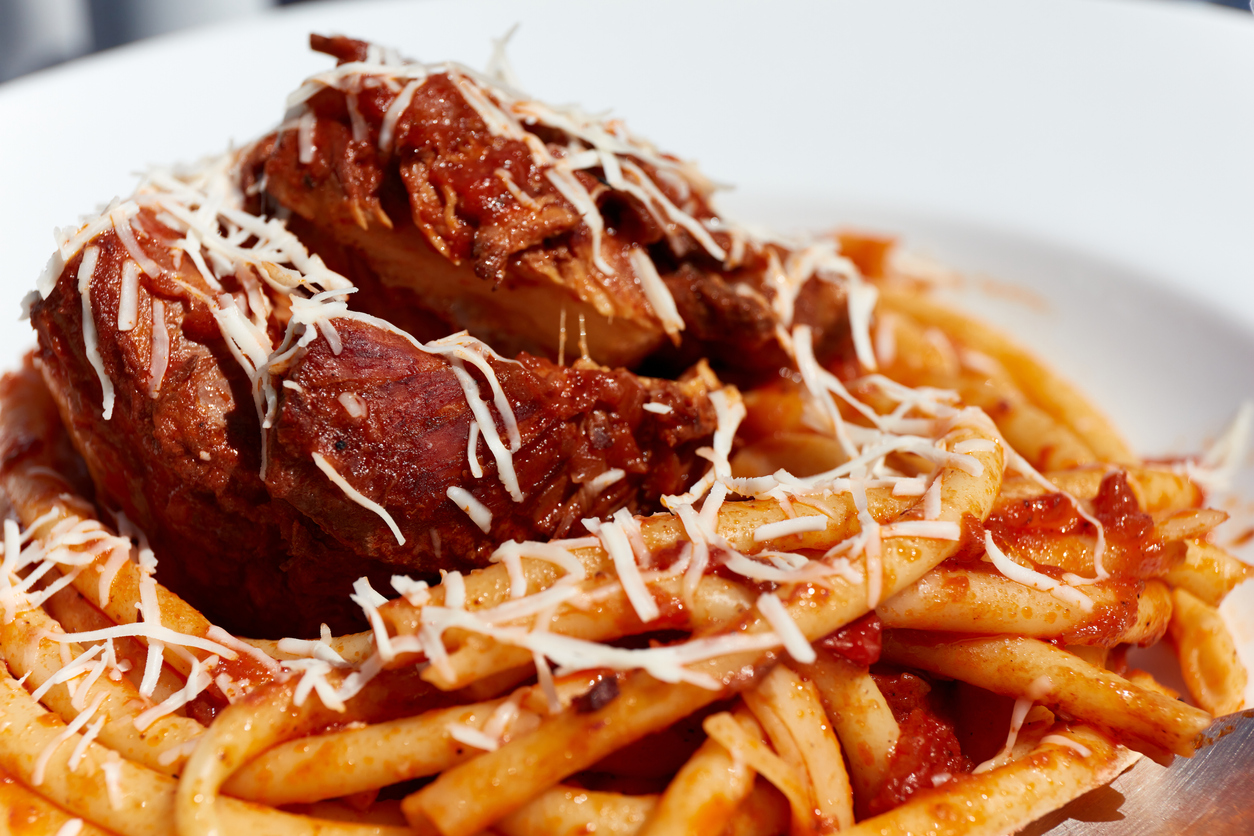 You will of course find all the usual yumminess of Greek dishes common throughout the country, but Corfu’s history has endowed it with its own distinctive cuisine, especially influenced by all its centuries under Venetian rule. One especially notable difference is the prevalence of pasta, unlike elsewhere in Greece. So it is that the foremost local speciality  par excellence is pastitsada, tubular bucatini pasta cooked with spices and red wine, topped with chicken or veal, and a traditional staple of family Sunday dinners.

On another front, being surrounded by the fecundity of the Mediterranean, seafood is also front and centre. One local star is stakofisi, fish (traditionally cod) simmered in a spicy tomato-based sauce with leeks, onions, and red peppers.

On the sweet side, one particularly curious local feature is the popularity of, of all things, Chinese kumquats, originally introduced by the Brits around 1860. You’ll see them in preserves, baked goods, and iconic Cofriot liqueurs. Who knew?

Winsome Weather & When to Visit

Thanks to its location, Corfu’s climate is a bit different to that of other Greek islands – actually one of the balmiest of any of them, with a median temperature ranging between 12° and 22° Celsius (54/72° Fahrenheit). Winters are mild and somewhat rainy, whilst  between June and September it can get pretty warm, though the temperatures of up to 31°C (88°F) are softened by mild offshore breezes. If you’re not a fan of too much heat, consider coming in spring – from mid-March to mid-June, when it generally doesn’t get any hotter than 18°C (64-65°F). Whatever time of year you come, a great time is all but guaranteed!

For more info, see the Corfu section of the Greek National Tourism Office website. Then book an extremely affordable flight on Iberia for a summer holiday to remember!