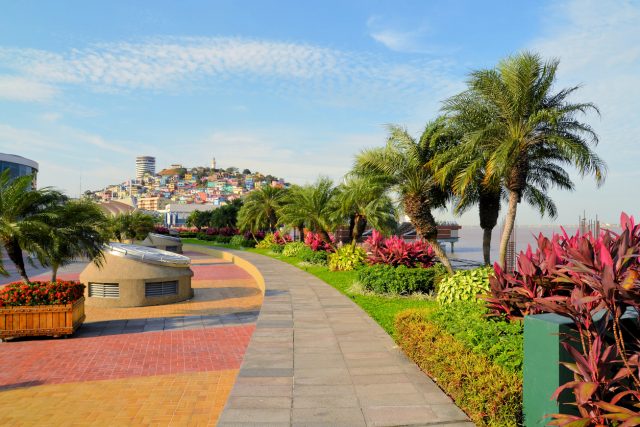 All major cities throughout the world have a corner – great or small in size – which are home to much of their daily lives. In coastal Guayaquil, Ecuador‘s largest and economically most important city, it’s Malecón 2000, a 2.5-kilometre (1½-mile) promenade along the Guayas River inuagurated in that year – and these days it’s a top destination for both locals and visitors, and helped by its proximity to the colonial quarter of Las Peñas (seen in the background at top).

Guayaquil’s premier urban-development achievement of the 21st century so far, Malecón 2000 has been declared a “Healthy Public Space” by the World Health Organisation, and it’s a great spot for enjoying fresh air and nature within the city as well as some fantastic views (including those of some of the city’s most iconic landmarks. 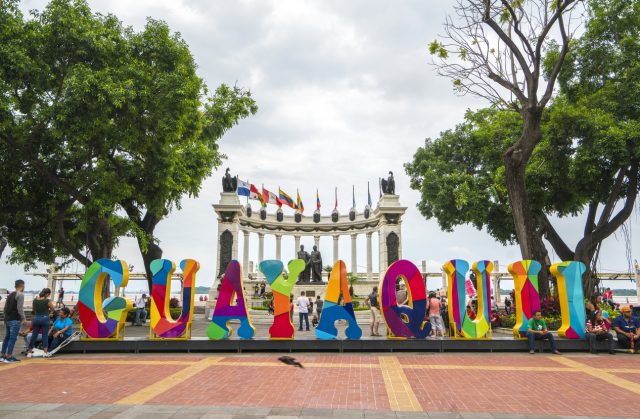 Other highlights along the Malecón include the Pabellón de los Donantes (Donors’ Pavillion), inaugurated two years later and made up of 32 tempered-glass placques inscribed with the names of the 48,000 contributors who made the promenade’s creation possible. Especially illuminated at night, among other things it offers spectacular views of Santa Ana Hill. Not far away, the marble Hemiciclo de la Rotonda (Rotunda Semicircle, above), adorned with the flags of the countries of Latin America, commemorates the 1822 Guayaquil Conference between the two foremost leaders of the liberation fight of Spain‘s colonies, Simón Bolívar and José de San Martín. Another notable monument here is the statue in honour of former Ecuadoran president  José Joaquín Olmedo, who as a local leader had declared the independence of the province of Guayaquil from Spain even before Ecuador and the other colonies did.

Also near here you’ll find a pair of other city icons. One is the Arab-style “Moorish Clock Tower” was inaugurated in 1842; is 30 metres (98 feet) tall; crowned by a clock imported from Great Britain; and open to visitors. The other is the recently renovated Crystal Palace, dating back to 1907. One of many of its kind popular in the late 19th and early 20th centuries, its design is attributed to non other than Gustave Eiffel, and now functions as a conventions and expositions centre, attracting more than a million and a half visits per year (making it by far Guayaquil’s most popular attraction). 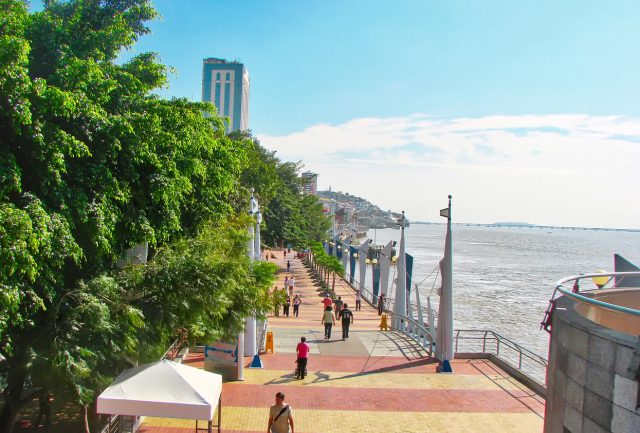 And beyond spaces aimed at families with kids, such as the Safari Park and a historitcal miniatures museum, the promenade’s cultural gem is the 17-year-old Museo Antropológico y de Arte Contemporáneo, one of Ecuador’s foremost museums, whose three floors and six salons are home to 50,000 archaeological artifacts and 3,000 works of contemporary art.