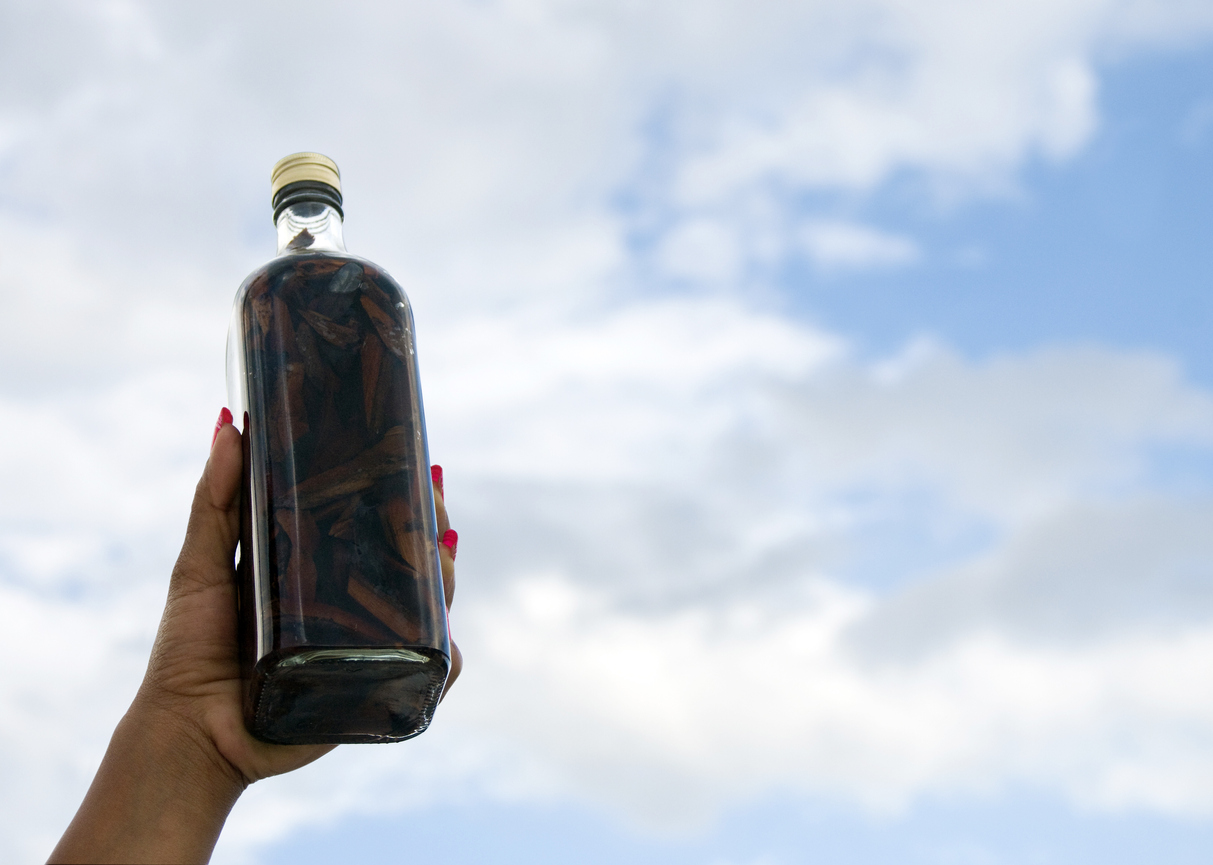 As I travel around the Caribbean (and to some extent this is true in Latin America, too), I find nearly every island has some kind of homegrown hooch (often rum-based) that purports to be “medicinal” (and sometimes certainly tastes the part), often  including revitalising, curative, and even aphrodisiac qualities. And if you visit the Dominican Republic, you may well come across the Dominican variation on this type of esteemed elixir.

The name mamajuana (Spanish for “Mama Jane”) is thought to derive from Dama Juana (Lady Jane), which referred to a traditional kind of large glass jar with a short, narrow neck. Although there is increasing commercial manufacture of mamajuana, it’s still mostly a homemade potion, and everyone has a different recipe.  Basically, though, it usually involves botanicals – sticks, leaves, bark, roots, herbs – essentially pickled in 40-proof rum and sometimes leavened with other flavours and sweeteners such as honey, cinnamon, molasses, vanilla, or red wine. And that’s not even counting the animal parts some people add – snails, octopus, and sea-turtle penis, anyone?

And honestly, most of the time the resulting brew can look a bit, well, nasty. But most the the versions I’ve tasted actually come across a bit funky – a little hard to describe, actually, but ranging from not bad to downright appealing, and the commercial brands increasingly found on store shelves can be downright silky (one good one is called Kalembú). And while traditionally the drink is imbibed straight or on the rocks, in recent years it’s been finding its way into cocktail culture, either in versions of popular tipples like mojitos, bloody marys (bloody juanas?), and cosmos, but also new inventions like the motoconcho (mamajuana mixed with vodka and rum, garnished with a couple of cherries).

And that “medicinal” part?  Mamajuana is held to help with headaches, colds and flu (no word on the coronavirus), to help get pregnant or keep from getting pregnant – and of course the ol’ libido (some have taken to referring to it as “liquid Viagra”).  Honestly, on that last point I can’t say I noticed much difference, but what the hey. For me it will always evoke warm memories of the Caribbean – particularly the beautiful corner of the Caribbean known as the Dominican Republic.