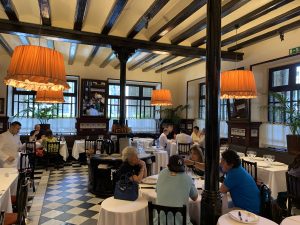 Spain‘s (and one of Europe‘s) most popular cities with visitors, Barcelona has also become famous for its cutting-edge culinary scene. But of course it’s also Catalonia‘s capital of history and traditional Catalan cuisine – and there’s no shortage of fine restaurants where you can amply indulge in both. (And by the way, keep in mind that like many BCN eateries, most of these offer set menus that are pretty good deals, especially for lunch.)

So without further ado, here are my top half dozen picks, most of them located in the city’s oldest district, the Barri Gótic (Gothic Quarter):

In 1836 down in the Barceloneta district right near the waterfront, Catalonia‘s then-wealthiest man, one Josep Xifré i Cases, commissioned a block of buildings inspired by the emblematic squares and streets of Paris, then set up his business and home there – along with a large ground-floor restaurant and café with seven doors (set portes in Catalan) for the public opening onto Passeig Isabel II.  It became quite the de rigueur place to see and be seen, attracting politicians, intellectuals, and various famous people over the nearly 19 decades since (check out the dark wood wainscoting running around the interior and you’ll see some of the names – a diverse bunch over the years, with political figures from King Juan Carlos to Che Guevara; artists of various ilks, including Antonio Banderas, Harrison Ford, Joan Miró, Pablo Picasso; and even scientists, such as Alexander Fleming, inventor of penecillin. The service is impeccable, and current owner Paco Solé Parellada has made a project of documenting and passing on the history and traditions of Catalan cuisine, and that’s reflected in a menu mixing classics and nouvelle, with standouts including canelons, (the Catalan version of canelloni), veal fricandó (in a rich mushroom sauce), and more than a dozen rice-based dishes such as paellas. Passeig Isabel II 14.

The second oldest still-operating restaurant in all of Spain after Madrid‘s Mesón Botín, the “House of Spoons” started in 1786 as a sweet shop on a side street off Les Rambles in the Barri Gòtic. With six dining rooms spread split between two floors, the interior definitely has an old-timey feel to it; beneath wooden beams, the walls are lined with colourful tiles along with paintings alongside more than 200 photos and sketches of the rich and famous of yore who’ve dined here. These days, foreigners linger alongside locals over hearty portions of well executed traditional Catalan specialities such as spinach canelons (cannelloni) with codfish, wild boar stew, and white beans with butifarra pork sausage. And true to its sweet origins, among the dessert classics here are crema catalana (the local take on crème brûlée) and xocolata calenta (extra thick, creamy hot chocolate).  Carrer Quintana 5.

Built in 1896 and open in 1897 as a café also amidst the narrow streets of the Barri Gòtic at the corner of Carrer de Montsió and Passatge del Patriarca, “The Four Cats” cuts a distinctive figure, a bit like a mini-Northern-European Gothic castle flavoured adorned with elements of Modernisme (the Catalan term for Art Nouveau) such as elaborate ironwork, stonework, arched windows, and stained glass. Designed by reknowned Modernista architect Jospep Puig i Cadafalch, it quickly became the hangout of Barcelona’s artsy, bohemian set, including artists Juli González, Picasso, and Santiago Rusiñol, pianists/composers Isaac Albéniz and Enric Granados; architect Antoni Gaudí; and Nicaraguan poet Rubén Darío. Flash forward 123 years, and Els Quatre Gats has admittedly become a bit of a “tourist trap” (meaning sometimes foreigners outnumber locals), but still, I’ve found the food to be pretty good, with the menu a mix of Catalan classics and nicely done steaks. Toss in live jazz nightly and plenty of historic ambiance in its art-and-memento-stuffed interior, and you’ll see there’s a good reason why this is a visitor draw.  Carrer de Montsió 3.

Yet another popular stalwart of the Gothic Quarter, opening its doors in 1835 a couple of blocks off of Les Rambles, it was originally named Can Bofarull for the founding family, but eventually became renamed for its most popular dish: caracoles (snails). They’re still on the menu here – both on their own and in the traditional Catalan pairing with rabbit in a savoury brown sauce – along with a parade of other Catalan classics including canelons, poll a l’ast (roast chicken), and paellas. And of course Los Caracoles, too, can boast its share of famous names who’ve been in to dine – not just Spaniards such as Salvador Dalí and Joan Miró, but the international likes of Giorgio Armani, Jimmy Carter, Robert DeNiro, Charlton Heston, and Lenny Kravitz. Some of their pictures can be spotted in the various dining rooms amid all the tilework, woodwork, paintings, wine barrels, clocks, chunky furniture, and sundry other bric-à-brac crammed onto the walls. Carrer Escudellers 14.

On a smaller, more modest scale, this old-timey Barri Gòtic tapas joint founded in 1929 is an atmospheric little spot conveniently located among popular destinations like the Picasso Museum and the Basilica of Santa María del Mar. Its name derives from xampany, the Catalan word for Champagne, but this region’s excellent sparkling wine (aka cava) is just one of the fine beverages served here, along with soft drinks, frosty Spanish draught beer,  and a number of the fine vintages Catalonia has become known for.  Amid this family-owned bar’s bright blue-and-yellow wall tiles, antiques, and small marble topped tables, the atmosphere – especially around lunchtime – is convivial, on the high-decibel side, and very local feeling, while the prices are fairly attractive by BCN standards. Check out the tapas selection along its bar, and have a feed on the likes of pa amb tomàquet (crusty bread rubbed with fresh tomato and garlic, then annointed with olive oil), potato omelette, and its much celebrated marinated anchovies (and oh yes, snails too, if you’re so inclined).  Carrer Montcada 22.

I’ll round out my list here with another venerable and well loved tapas bar, this one a few blocks southeast of the Gothic Quarter in the working-class Poble Sec neighbourhood. Founded in 1914 and now run by fourth-generation proprietor Quim Pérez, it’s a tiny spot, with a red shop front on a fairly nondescript street, where generally no more than 20 people at a time stand at the stainless steel bar or a couple of high, chairless tables to quaffing their libation of choice whilst nibbling what many consider BCN’s best tapas, especially montaditos (served atop small slices of crusty bread) in creative combinations. Pretty much all the local favourites are on the menu, with special attention given to seafood, from succulent little bivalves from the north – cockles, mussels, and various types of clams – to tuna, squid, sardines, anchovies, and salmon (in fact, one of the signature house montaditos is mixes salmon, yogurt, and truffle honey. As for décor, it’s pretty much all about shelf upon shelf of liquor, wine, and beer bottles, accented by the occasional Chimay or Pilsener Urquell sign. A real original – but depending on the day and time, be prepared to stand in line outside for a bit! Carrer del Poeta Cabanyes 25.