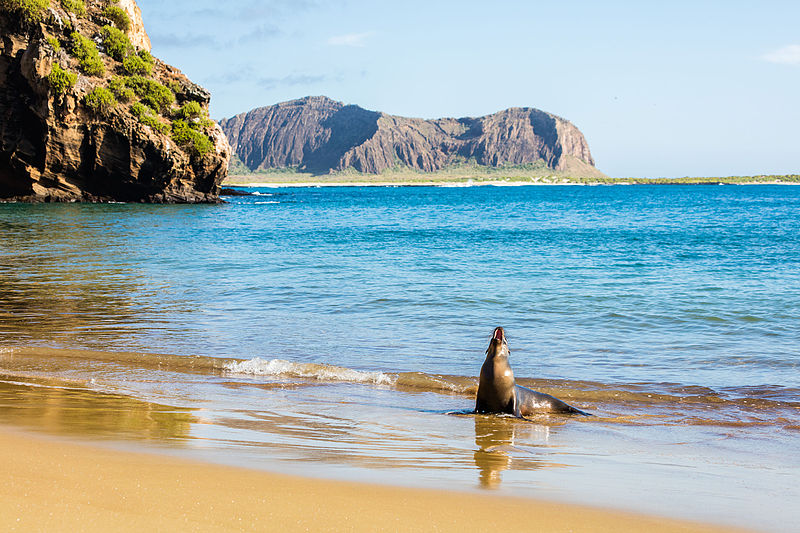 As concern for our shared global biosphere rises, many are taking it to heart when it comes to travel, as well. Along with booming ecotourism, both providers and consumers in the travel and tourism sector are looking to promote tourism that’s “sustainable” – a trendy buzzword, for sure, but one that simply means striving to minimise as much as possible any negative impacts on our increasingly beleaguered environment whilst allowing visitors to enjoy and learn more about it. And today we’re taking a look at one of the pioneers of that effort: the 21-island Ecuadoran archipelago in the Pacific Ocean – a 2½-hour flight from Quito, 1½ from Guayaquil – and occupies a unique place in both history and science. I’m talking, of course, about the reknowned Galápagos Islands.

As many of you know, this UNESCO World Heritage Site made history 161 years ago as the subject and inspiration of Charles Darwin‘s On the Origin of Species, its remarkable population of endemic species leading Darwin to form his theory of evolution by natural selection. Said species include 32 types of mammals, 159 birds, and 28 reptiles – one of which in recent years became famous for being the last of his kind in existence. The giant Pinta Island tortoise dubbed “Lonesome George” died in 2012 at an age thought to be 101 or 102, and his body remains preserved on display at the Charles Darwin Research Station on the most populated island, Santa Cruz.

While due to the unique nature of their flora and especially fauna the Galápagos National Park covering what have been dubbed “the Enchanted Islands” has become one of the world’s most emblematic eco-destinations, with around 150,000 visitors per year supplementing the islands’ permanent population of around 25,000. This is a double-edge sword, to be sure, so in order to preserve their unique and delicate natural heritage and prevent tourism from “loving the place to death”, measures have been put in place by the government of Ecuador to limit the kind of “overtourism” which has sadly ended up degrading other popular spots around the world.

This starts with a special tax charged before boarding flights to the Galápagos, generally 100 USD (or 50 in the case of children) for most non-South Americans, which goes toward supporting conservation efforts on the islands. This is of course on top of the airfare, which can run 400-600 USD round trip, depending on the time of year. The greater cost associated with just getting out here tends to keep more of a lid on visitor numbers than would otherwise be the case. Then upon arrival at the Galápagos airport, the luggage is meticulously inspected. It’s forbidden to access the archipelago with plants and/or food that could contaminate the region.

There are also some more proactive rules, such as a limit of 400 visitors per day on Isabela Island, and no smoking, fishing, animal feeding, or motorised water sports in the park areas outside the towns. And no visitors are permitted to explore the islands’ natural areas without a guide.

A good way to explore some of the islands is to take a cruise on licensed ships – both day excursions and overnight liveaboards – and these must be approved and certified as ecofriendly by national park authorities. What makes these cruises sustainable? For example, positioning systems that protect the seabed, wastewater treatment systems, water purifiers that help reduce the use of plastic bottles, and their organic/sustainable onboard meal menus.

There’s also the opportunity to see and even interact with various local animals on land as well as in the water via carefully directed snorkelling and diving. For the latter, there are some areas of the protected Galapagos Marine Reserve, to which visitors free access, and others only accompanied by accredited guides.

Despite such these rules, regulations, and restrictions – which I think we all can agree are necessary to preserve the precious natural heritage of such a unique place – as a visitor you don’t feel particularly “restricted”. And you’ll undoubtedly come away with a greater than ever appreciation of nature and perhaps also our own place within it.