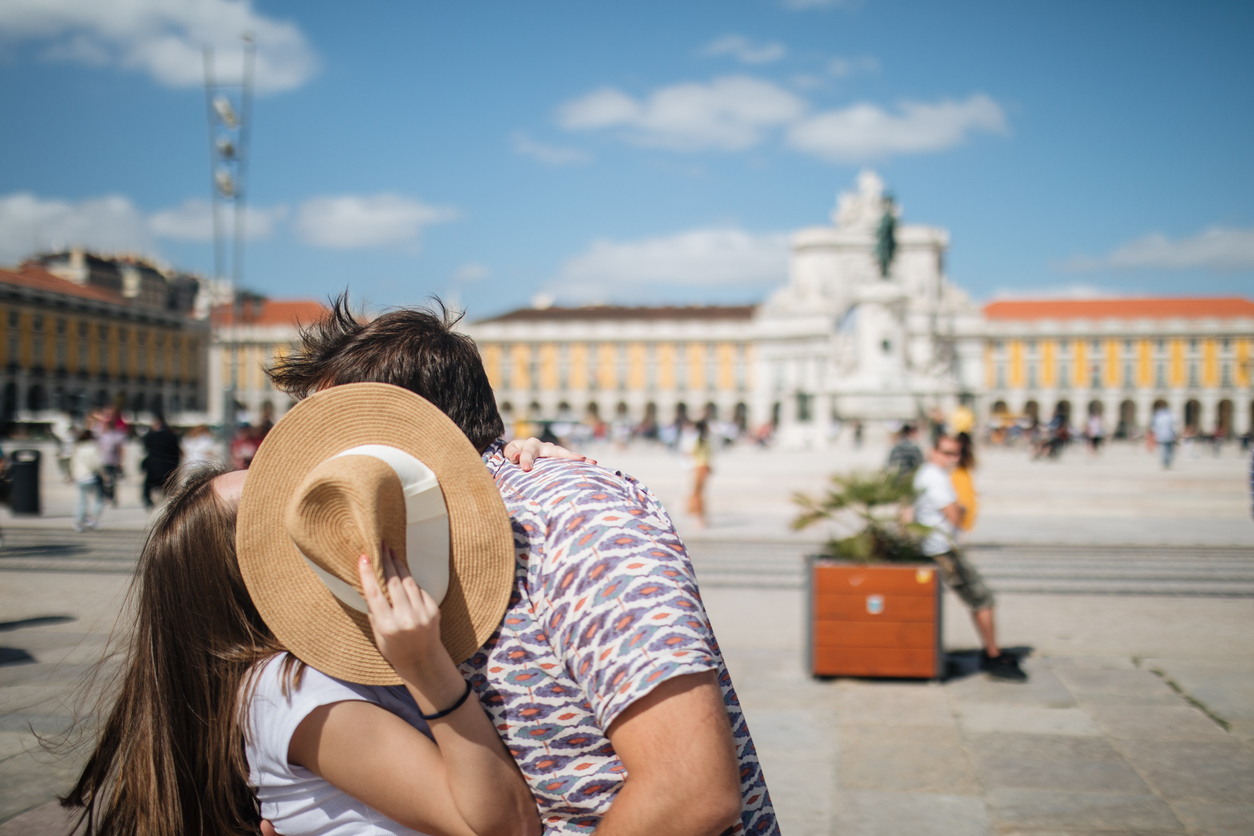 Happy Valentine’s Day! These days Lisbon is not only in vogue with both tourists and expats but it’s also giving Paris a run for its euros as a haven of romance. The amorous pedigree of Portugal‘s capital actually goes back quite a ways, its patron saint Santo Antonio is also the patron saint of lovers, regarded as something of a “holy matchmaker” and fosterer of marriages. In any case, it’s a very charismatic place that provides an all-round magical backdrop with a knack for making people fall in love with it, and each other. And here are eight excellent examples: 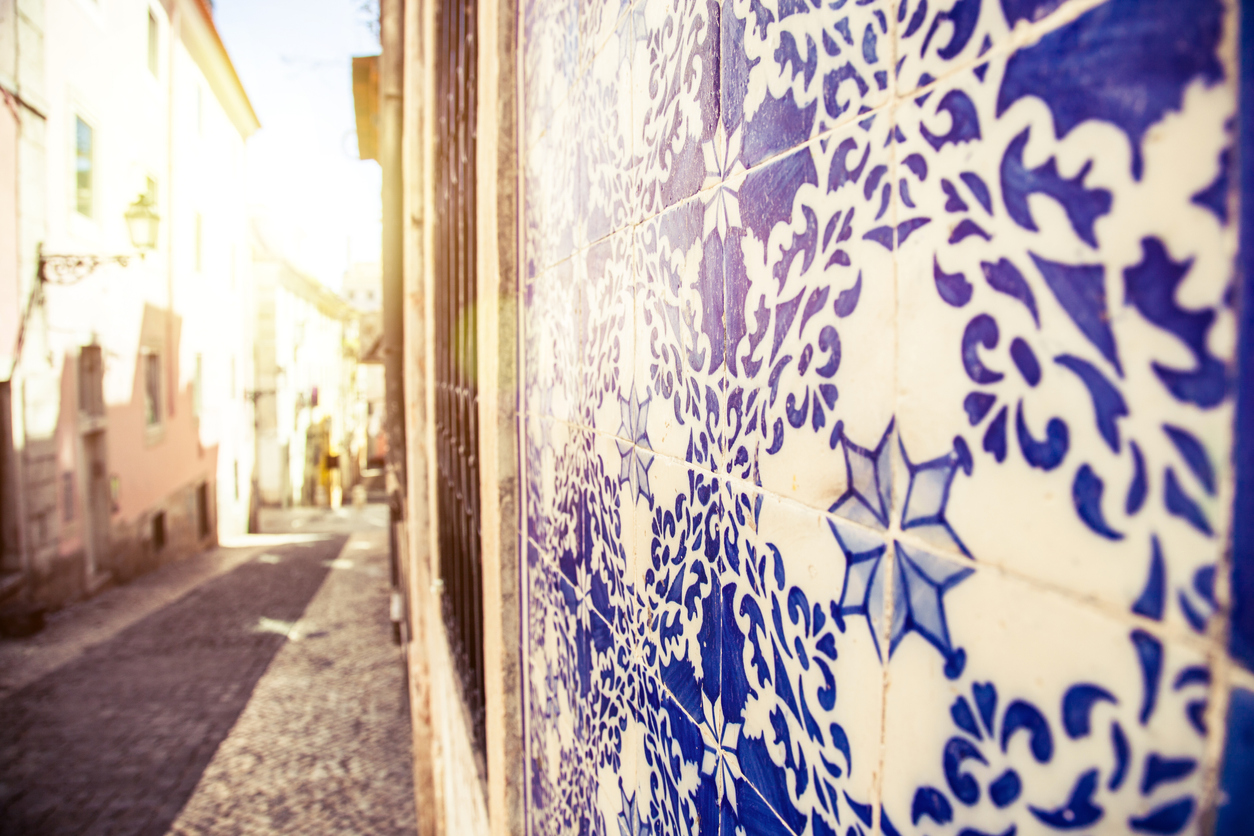 This city’s lovely districts are always a pleasure to discover on foot – particularly in wintertime when there are fewer tourists. Two that are particularly romantic include  Bairro Alto, the “high neighbourhood” with 15th-century roots perched atop one of Lisbon’s hills, charms utterly, its steep cobblestone streets lined with quaint tavernas, cute shops, and beautiful Pombaline and Romanticist architecture. Across the way, Lisbon’s oldest quarter, Alfama, is also a delight to wander. Crowned by the medieval São Jorge Castle, it’s famed for mazelike streets and winding alleyways, lined with traditional restaurants and bars, azulejo ceramic tile shops, and fado music clubs (more on those below). Additional atmosphere is lent in many spots by typical calçada portuguesa (Portuguese pavement), with footpaths adorned in stone mosaics of various patterns and pictorial designs, as well as colourful azulejos on many buildings, said to contribute to the fabled “light of Lisbon”. Grab your partner’s hand and admire it all as you stroll along. 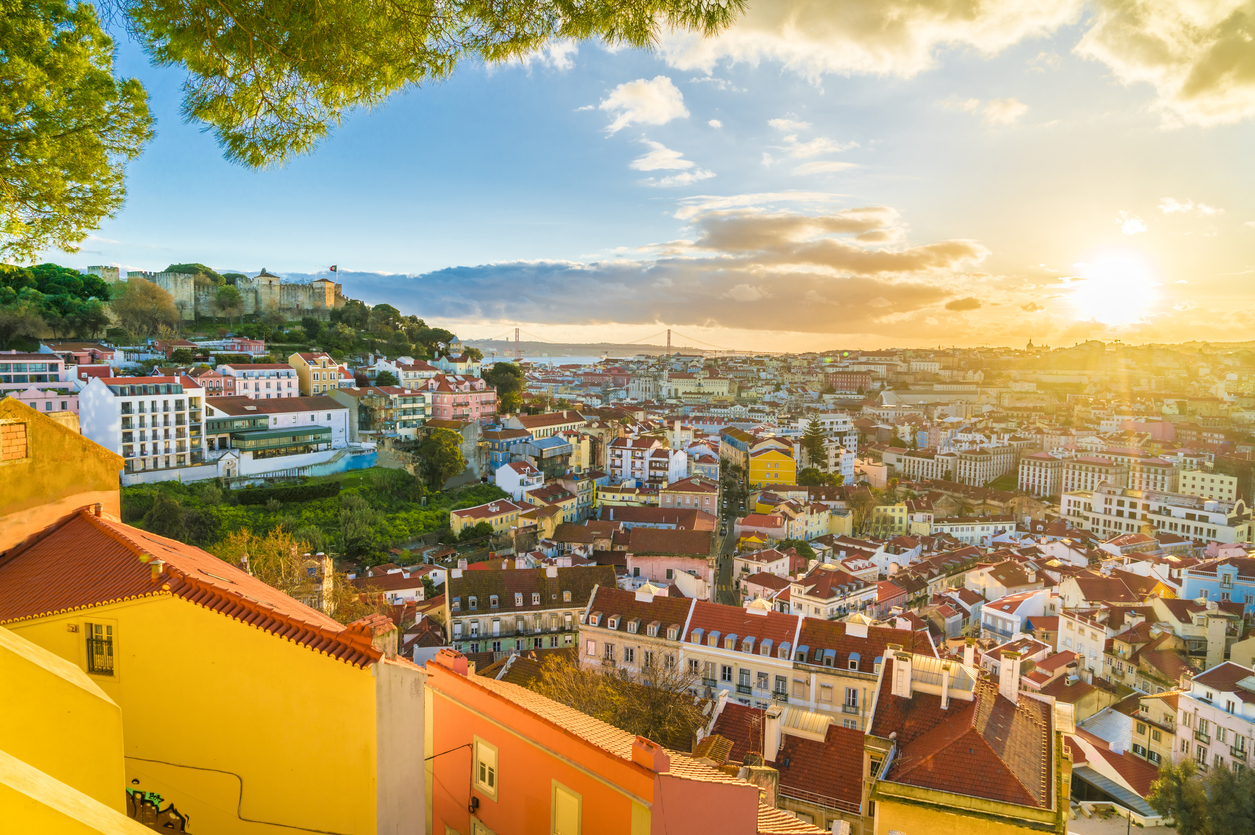 Is there a better time for lovers than the moment the sun sinks lazily into the horizon? Lisbon was built on a series of hills, so couples should ascend to any of the city’s many miradouros (viewpoints) for sunset, the dreamiest time of the day. Romantic terraces include the Miradouro das Portas do Sol and Miradouro de Santa Luzia in the Alfama; the Miradouro de São Pedro de Alcântara in Bairro Alto; and the Graça neighbourhood’s Miradouro da Graça and Miradouro da Senhora do Monte (this last is the highest in the city, a favourite of young lovers, and with a chapel nearby). Also don’t forget the Castelo São Jorge, the 11th-century castle perched regally on a hilltop above the Alfama, affording spectacular, sweeping views of the city as well as a romantic garden which houses the ruins of the medieval royal palace – a spot which has certainly borne witness to a marriage proposal or three! 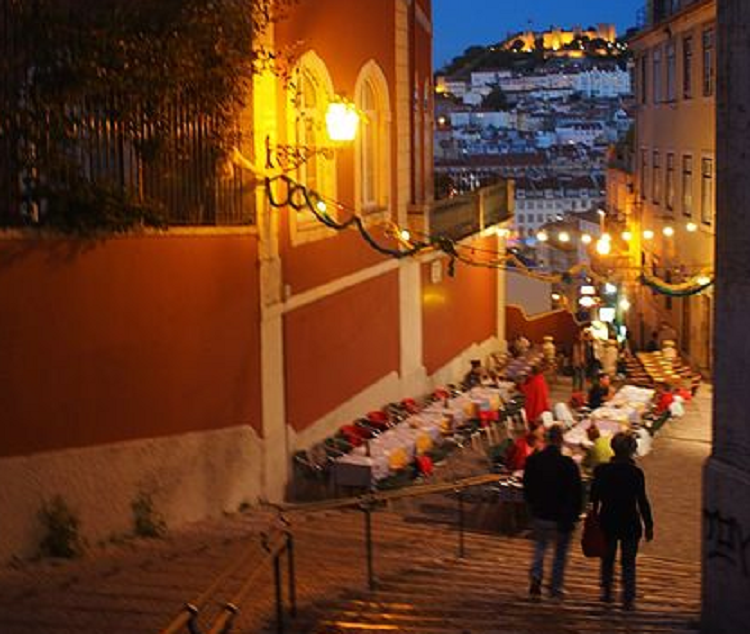 Dine Alfresco on a Postcard-Perfect Street

Connecting Bairro Alto and Rossío Square, lantern-lit Calçada do Duque will steal your hearts while you’re stealing each other’s. This is a narrow staircase street that’s lined with charming traditional Portuguese restaurants, and it’s deliciously divine for dining under the stars – and with a muito romântica view of the São Jorge Castle illuminated on its hilltop off in the distance. Find your perfect spot and feast on, for example, bacalhau à brás (scrambled eggs with shredded salt cod, potato, and onion) accompanied by a glass of Portugal’s fine vinho verde (slightly fizzy young wine). After all, as the early-20th-century English writer Virginia Woolf once wrote, “One cannot think well, love well, sleep well if one has not dined well”.

Speaking of romantic dining, for a more lively version thereof, head to the Mercado de Campo Ourique, a 1934-year-old covered market in the eponymous Campo Ourique neighbourhood, a few minutes’ stroll west of Bairro Alto. For the past few years it’s operated as a food hall where locals love to come and enjoy an array of delectable culinary options under one roof. If this strikes you as a potential mob scene, no worries – it’s also prized by couples on dates, lured by the cosy atmosphere, gentle background music – and of course, interesting and scrumptious food and wine.

Experience the Emotion of a Fado Show

Born here in the early 19th century from earlier roots, fado (from the Latin fatum, “destiny”) is a solemn, plaintive genre of music and singing that evokes nostalgia and longing encapsulated in the not directly translatable Portuguese concept saudade, and often also evokes the bittersweetness of love. Fado clubs and restaurants can be found all over the city but are especially concentrated in Alfama. Experiencing such a moving and powerful performance over a scrumptious candlelit dinner or drinks will be an emotionally charged experience for any couple. 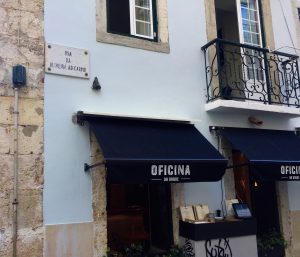 Embark on a ‘Treasure Hunt’ for Two

Try something new and lead your love on a mysterious journey to uncover some of Lisbon’s hidden treasures together; it’s a novel way to discover a new city, and nothing creates bonds like a shared goal. Over the cobblestones of narrow Rua da Oliveira ao Carmo, in the Chiado district, for example, there’s a single, mysterious metal nose stuck onto a wall. It isn’t easily discernable and nobody seems to have sniffed out answers regarding its provenance. Other stops on your couple’s treasure hunt might include the world’s oldest still operating bookshop (founded in 1732), Bertrand Livreiros in Chiado, where your prize could be one of its selection of English books, as well as tracking down the world’s only public mirror meant for tidying your necktie (in Rossío near Dom Pedro IV Square). And kindle or rekindle the flame with a classic candle from Caza das Vellas Loreto one of the world’s oldest still existing candle shops, open since 1789 on Bairro Alto’s Rua Loreto. 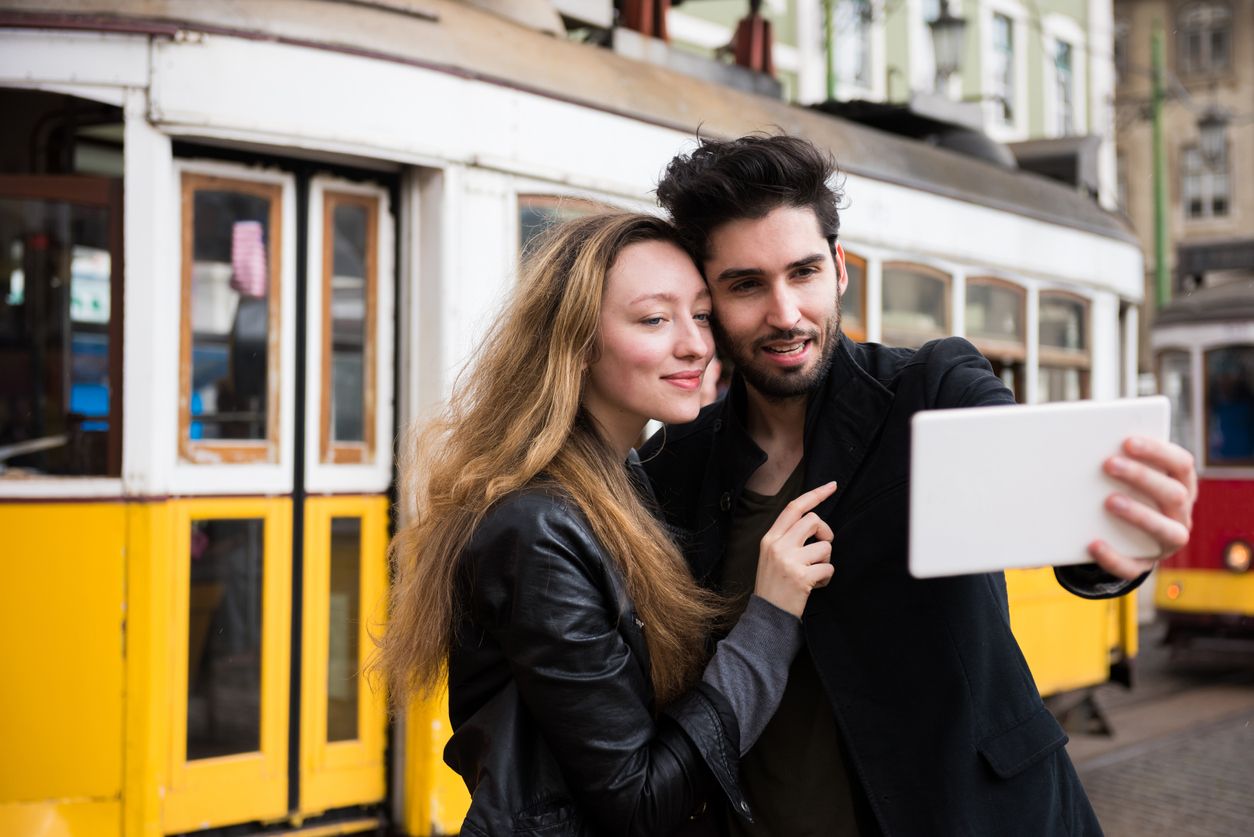 Rev Up Your Romance by…

…snuggling up on one or more of Lisbon’s iconic, historic modes of transport. First and foremost, of course, that means the famed Tranvía 28. The city has an extensive network of modern, electrified surface trams, but on the No. 28 line, holdovers from the 1930s are kept around not just for old times’ sake but because the sleek new ones can’t handle the gradients and twists of this route (and that it’s hella good for tourism doesn’t hurt either!). Running between Campo Ourique (see food hall, above!) and multiculti Martim Moniz Square a few blocks below São Jorge Castle, the 28 trundles past or through the Bairro Alto, the Chiado, the national parliament building, the Alfama’s Portas do Sol square, the old cathedral, and other districts and landmarks.

…or hopping aboard another very lisboeta conveyance: the ascensor or elevador (funicular), like an oddly angular kind of tram used to negotiate unusually steep streets. There are two connecting the lower reaches of the city with Bairro Alto, the Ascensor da Glória and the Ascensor da Bica (and affording gorgeous Tagus River views).

…or taking to the skies in the Telecabine Lisboa, a cable car system providing an eight-to-12-minute ride high over the Parque das Nações (Nations Park) in the city’s eastern outskirts, site of the 1998 World Exposition that today is a hypermodern district filled with shopping, attraction, dining, and nightlife. Each car holds eight, but depending on the time of day you may be able to snag one for just the two of you, and together drink in the sweeping views of among other things the Vasco da Gama Bridge, Europe’s longest. 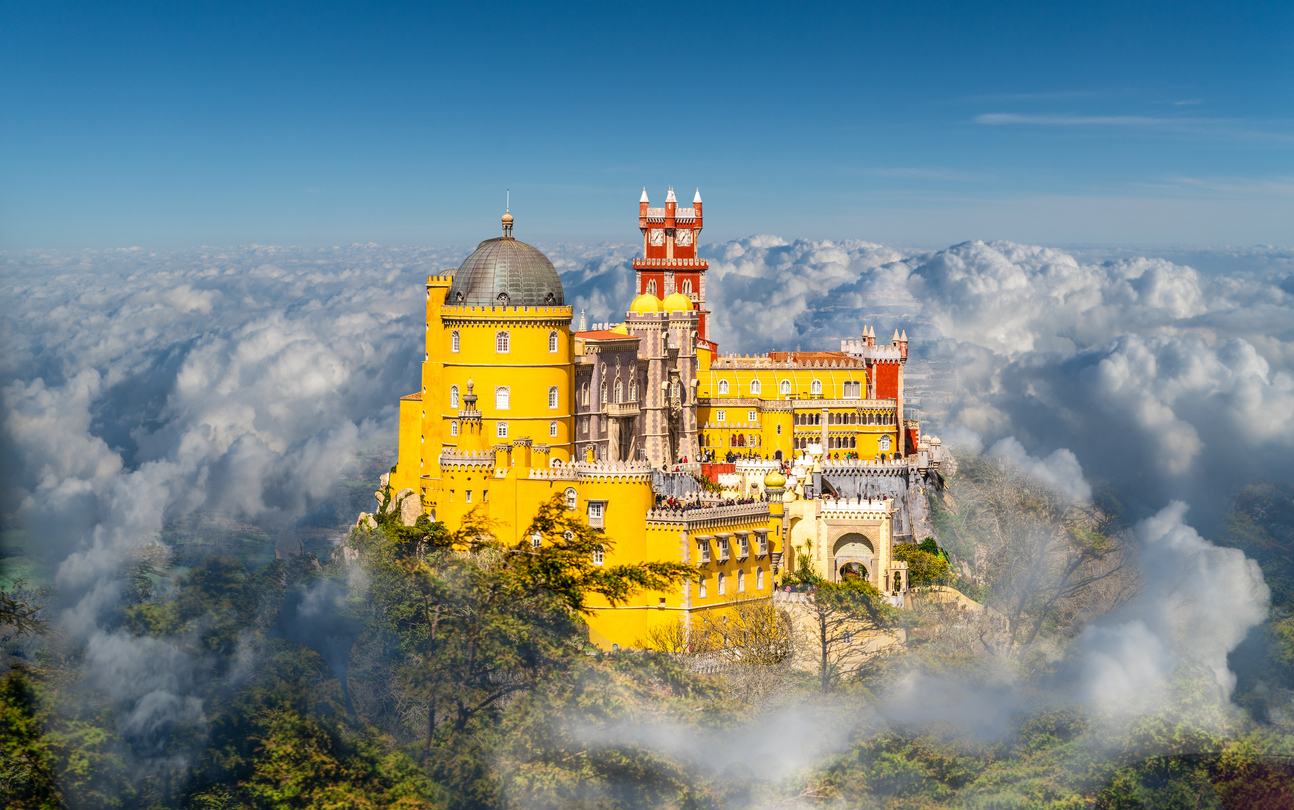 Finally, not even a half hour’s drive or 40-minute train ride from Lisbon will whisk you back into a fanciful royal past. The city of Sintra‘s old quarter, in a nature reserve perched on the windswept cliffs of Europe’s westernmost point, the Cabo da Roca, is a UNESCO World Heritage Site thanks to its past as a refuge – especially in summertime – for Portugal’s royal family and courtiers. Its most iconic structures are the Gothic-Renaissance Royal Palace, dating back to the 15th century and recognisable for its conical white towers, and the sprawling, hilltop Pena National Palace (above), built in a romantic style in the mid-19th century. A third palace, the Quinta da Regaleira, was transformed in the 1890s by a new naturalist owner, who created a neo-Gothic estate of pinnacles, gargoyles, capitals, secret tunnels and grottoes, hidden waterfalls, lovely fountains, and an impressive octagonal tower – all riddled with esoteric symbols alluding to alchemy, the Knights Templar, the Rosicrucian Order, Freemasonry, and the like. All magical spots to explore together which do indeed feel like something out of a fairytale.

Rosie Bell is a roving travel writer, author and the founder of Club Elsewhere, a digital travel platform focusing on life-enriching experiences. She’s been fortunate to visit over 100 global destinations but feels most at home under the sun. Follow her adventures on Twitter and Instagram, @TheBeachBell.