Well, pre-Lenten Carnival season is here again! And most of the world’s historically Catholic countries, regions, and cities put on a variety of colourful, rollicking celebrations. And Argentina is no exception, as it rolls out traditional street parties and parades in cities and towns across the country, with standouts including Gualeguaychú, three hours north of Buenos Aires near the Uruguay border; Corrientes, in the north near Paraguay; and of course the national capital, where the proceedings hit the streets on weekends throughout February and the first week of March – and with a special flavour all their own. So break out the drums, feathers and sequins, and vamos a la fiesta!

Held in various areas of the city and dating back to 1869, Carnival here shares many of the colourful characteristics and antics with these types of celebrations everywhere. They  include colourful costumes and masks; music and dancing in the streets; noisemakers and gaily hurled water bombs; and most characteristically, parades featuring more than 100 murga groups totalling more than 10,000 members – analogous to Rio de Janeiro‘s samba schools and New Orleans krewes.

Murga performances involve vigorous dancing and moves that are practically acrobatic by murgueros clad in colourful parodies of classic gentlemen’s attire (complete with top hats), to the rhythm of percussion – typically a bombo (bass drum), redoblante (snare drum), and platillos (clash cymbals); sometimes it’s accompanied by singing and stylised speech, especially concerning social and political criticism. The big finale comes in a parade down central B.A.’s main drag, the Avenida de Mayo, attracting some 800,000 spectators. There are also competitions in which the performances of the various murgas are judged. 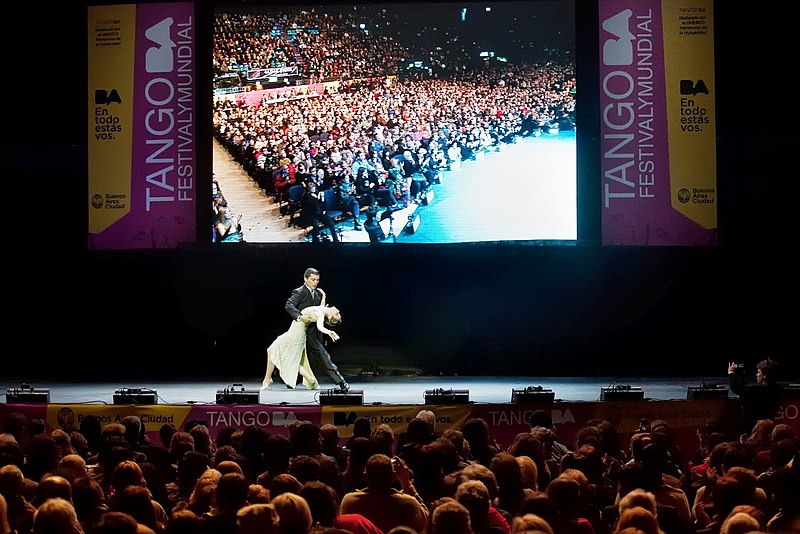 The Buenos Aires calendar is chock-full of events of all types throughout the year, and a pair that’re particularly interesting and quintessential are:

Every August (this year’s dates haven’t yet been finalised), various venues both indoor and outdoors come especially alive for two weeks as tango dancers and fans gather in Baires in the thousands for the performance and celebration of the city’s (and country’s) quintessential art form. Besides the annual Mundial de Tango competition with finals at the city’s 9,290-seat Luna Park stadium, that includes more than 50 concerts and exhibitions – many of them free of charge – a product fair, and kids’  events. The picturesque streets of neighbourhoods like Caminito and San Telmo are also packed with tango performances. No better time to experience classic Argentine culture!

Asado (aka parrillada) is if anything even more integral to this country’s culture than tango, and savoury smoke and gaiety fill the air in September at this biannual competition and celebration of exquisitely roasted meats, held on Calle Lisandro de la Torre in the aptly named Mataderos (Abbatoirs) neighbourhood in the capital district’s southwest, where the city meets the countrside. In addition to enjoying world-class steaks, classic Argentina maté tea, and other national culinary specialities at affordable prices in various open-air settings, visitors also get a chance to appreciate this outlying, very local-feeling neighbourhood which lies off the beaten tourist track. Here you can also experience a bit of gaucho (Argentine cowboy) culture without having to venture out to the surrounging pampas (savannah), and check out the small Criollo de los Corrales (Creole) Museum, dedicated to the gaucho culture as well as a collection of antique weapons.

A legacy of the heavy British influence in Argentina in the late 19th and early 20th centuries, the “sport of kings” is something of a populist obsession down here, and many of the world’s top-ranked players are Argentine. The season is September through early March, but for four weeks every November and December things reach a fever pitch during the world’s foremost interclub competition, held at the Campo de Polo Argentino (dubbed “the cathedral of polo”) in the Palermo district; this year’s 26th edition runs 16 November through 14 December. Along with the ponies, glamorous snacks and cocktails are also part of the package. Quite a heady – and of course horsey – experience!