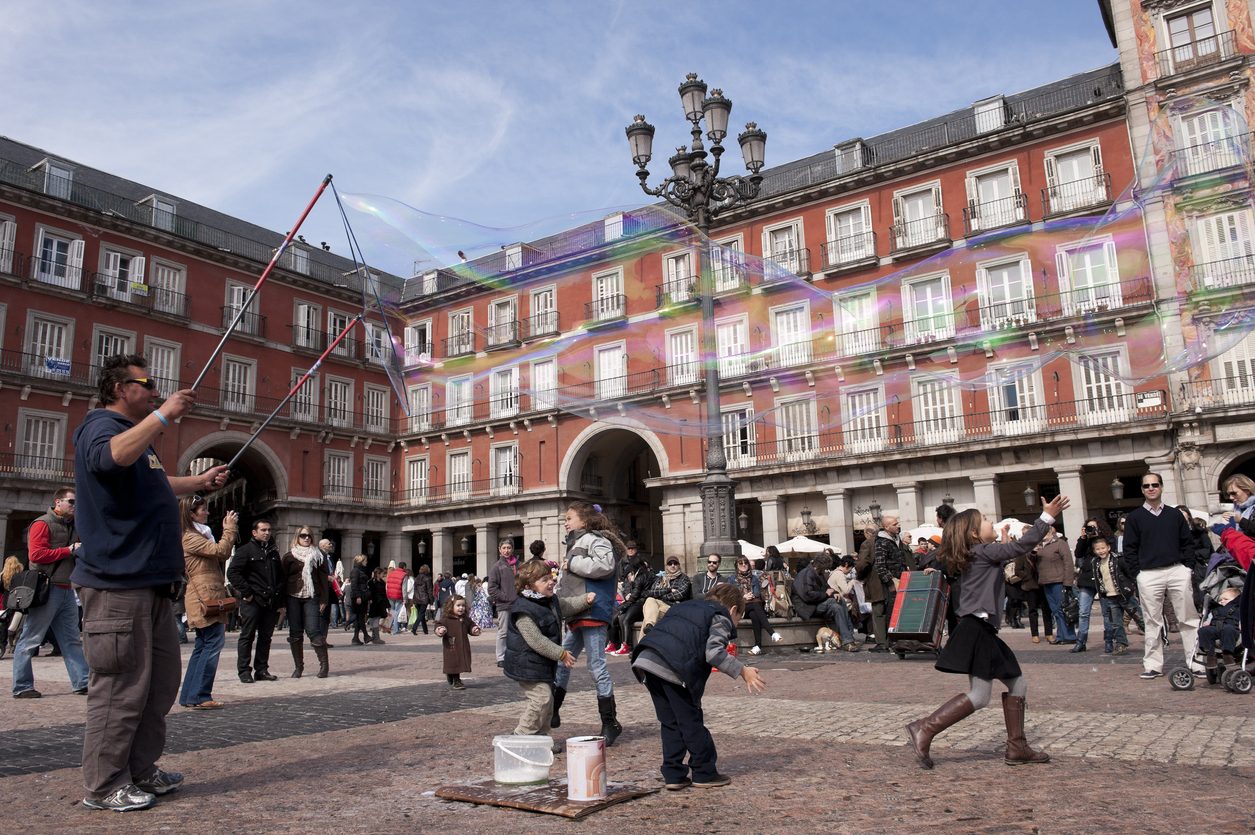 Spain‘s capital is famously packed with all sorts of adult delights, from historic sights to culture to dining to nightlife waaaay into the wee hours.  But if mums and dads travelling with youngsters will also be glad (perhaps even also relieved) to learn that it also offers plenty of great ways to entertain and educate them, including a variety of ludotecas (play centres) and kid-friendly cafés. Here are eight of the best, between my own experience and what various Madrid parents have told me about. All are central and/or easily accessed by the city’s excellent Metro system.

I’d like to start off with a real classic. The more than 125 hectares (309 acres) of Madrid’s most iconic green space is also a great place for the whole family to stroll, have an ice cream or snack, and paddle around the lake in rowboats in front of the famous columns and equestrian statue of the monument to King Alfonso XII. On warm-weather weekends, a little open-air theatre also puts on cute puppet shows, and art-loving mums and dads might also want to check the late-19th-century Crystal Palace and Velázquez Palace to see if there’s a contemporary exhibition organised here by the Reina Sofía Museum.

West of downtown and the royal Oriente Palace, Madrid’s largest park is just over 17 square kilometres (just under seven sq. miles), with a lake, lawns, woodsy areas, and this collection of some 30 rides, shows, and other amusements from tame for the little ones (boat and zeppelin rides, a mini roller coaster, and a Nickelodeon-themed section) to more adrenaline pumping for bigger kids and grownups (including a pair of wilder coasters, the free-fall “Lanzadera“, splashy water rides, and more).  There are also a half dozen eateries.

And wait! This park park is also home to a cable car, the Madrid Teleférico, as well as the…

Right nearby on 20 hectares (49 acres), one of Spain’s largest zoos is home to more than 6,000 animals of some 500 species from every continent except Antarctica, and it’s one of the few in the world that has giant pandas – always a kid favourite; for the most part the critters are separated from the public by moats or rails. Meanwhile, Spain’s first tropical aquarium (established 1995) is a two-storey glass pyramid with 30 tanks with some 330 species and features including a shark tunnel and dolphinarium.

Yep, dinosaurs in Madrid!  Housed in late-19th-century building in the Castellana area east of downtown, this venerable but admirably updated collection of more than six million specimens of biology and geology includes T-rex and other dino skeletons along with myriad permanent exhibits – an increasing number of them multimedia and interactive – about animal and human biology from the present stretching 4½ million years into the past. The rocks and minerals are an impressive lot, as well, and rotating exhibitions focus on interesting and often important topics, from 2019’s exhibition marking the year of the periodic table of chemical elements to the current “Natural History of the Chinese Calendar” to celebrate the Year of the Rat, to others highlighting biodiversity and the alarming effects of climate change.

National Museum of Science and Technology

Inaugurated in 2014 in the outlying town of Alcobendas (an easy Metro ride away), this temple to tech boasts more than 17,000 pieces of  scientific and tech equipment, transport vehicles, tools, and assorted machines and gadgets from cutting edge to historical, back to the 16th century. There are also interactive displays and installations such as plasma balls; wave and air simulators; and a booth that emulates what happens inside a camera. Both educational and fun!

Located in Tierno Galván Park several blocks south of Atocha Train Station, this state of the art (and free of charge) astronomy emporium goes the extra kilometre to get kids engaged with space. Its projections are of course narrated in Spanish, but still visually striking and entertaining, and there are also at any one time a handful of great exhibitions – currently, for example, one relating the skies and space to children’s tales and fables, and another of spectacular images captured by the Hubble Space Telescope and other instruments.

Are your kids (and, hey, even you) intrigued by robots? This museum in central Madrid’s Malasaña nieghbourhood is unique in Europe, exploring the past, present, and future of robotics, including robots of all types and shapes (including robot dogs and replicas of Star Wars droids C-3PO and R2-D2), a number of which visitors can see in action and even interact with. Admission includes a 45-minute guided tour (available in English). Coolness indeed!

A little farther afield, get another dose of theme parks at this one on the city’s outskirts outside the town of San Martín de la Vega. It’s devoted to the movies – specifically those of Warner Bros.  Studios, and among other things, that means DC superheros like Superman and Batman as well as favourite classic characters such as Bugs Bunny and Tweety Bird. Its 150 hectares (TK acres) are divided into areas like Cartoon Village, Superheros World, and Old West Territory, and of course includes the requisite great rides and shows.