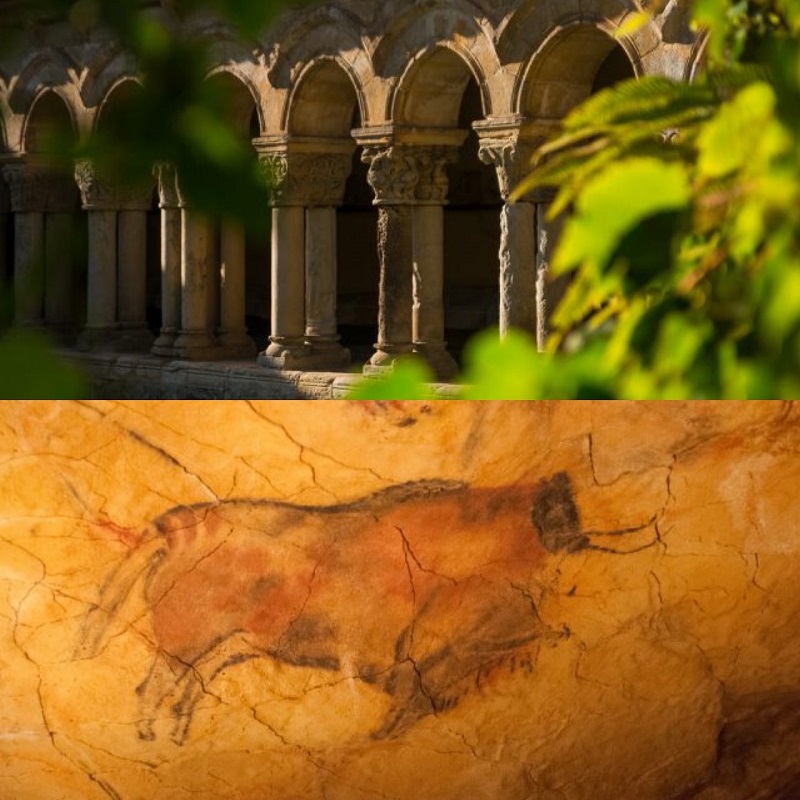 Up in green north Spain, a half hour west of Santander, capital of the autonomous community Cantabria, lie a pair of two of the country’s foremost gems, but in very, very different ways. Separated by millennia, each shines a spotlight on an aspect of human history and culture that has has helped make Spain – and you could say even Europe and the entire world – what they are today.  Welcome to Santillana del Mar and nearby Altamira Cave. 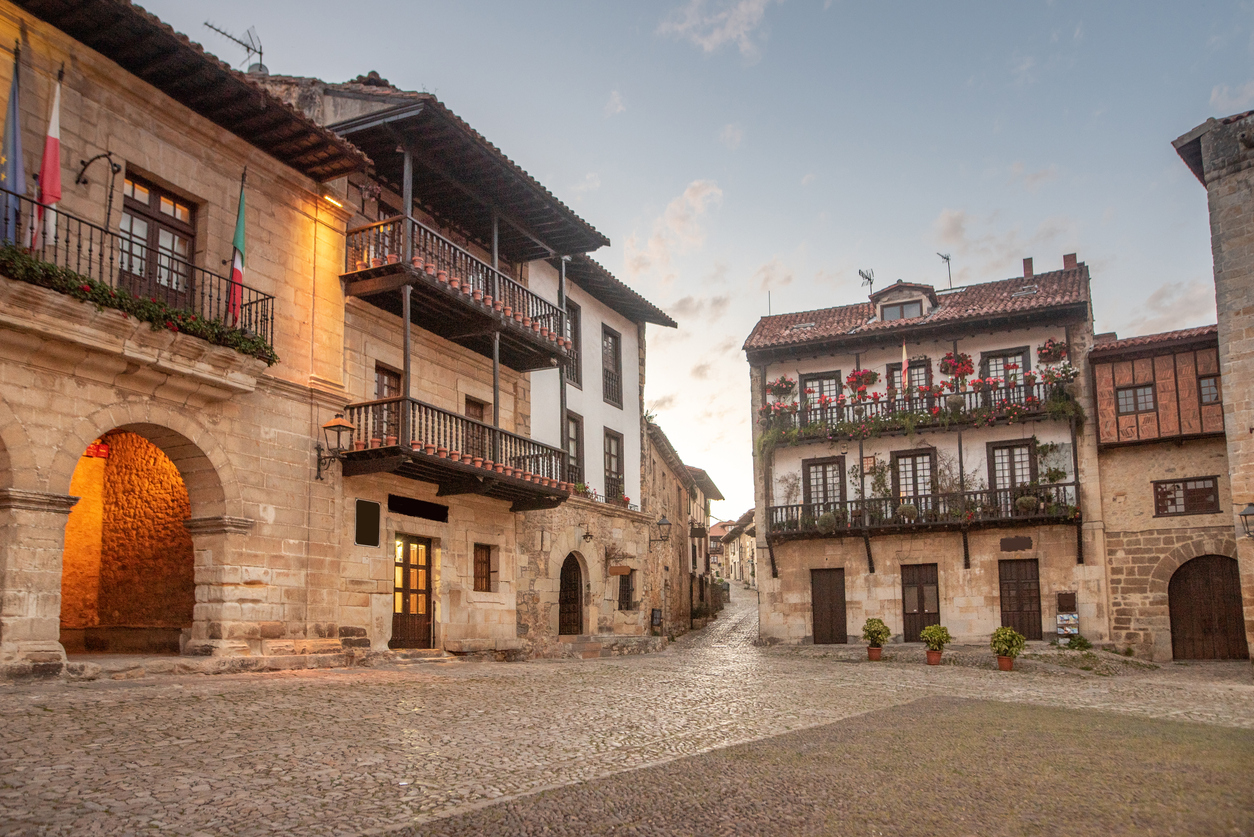 Among other things, Spain is notable for a number of towns which are veritable museums of the Middle Ages (this blog has shined its spotlight, for example on places like Zamora in Castile-León as well as a number of towns in Catalonia). But Santillana del Mar (“St. Llana of the Sea”, named after a saint – aka St. Juliana of Nicomedia – a 4th-century martyr from present-day Turkey whose relics ended up here) is such a perfect jewel that the reknowned 20th-century writer Jean-Paul Sartre once described it as “the prettiest town in Spain”.

And these days, Santillana’s population of barely 4,000 multiplies exponentially when the weather warms up, as visitors flock to the cobblestone streets and gorgeous half timbered and stone townhouses and churches of its compact historic core, with buildings dating back to the 12th century. That’s the century when the star of the local landmarks, the Romanesque Colegiata of Santa Juliana (below), was built. Its three-nave church is plenty atmospheric enough, centred around the saint’s sepulchre, but its paramount glory is the serene cloister (top), its 43 columns topped with capitals exquisitely carved with flora, fauna, and scenes from the life of Jesus Christ. Another interesting if somewhat grisly local attraction is the Torture Museum, in which the “Holy” Inquisition of course plays a central role. 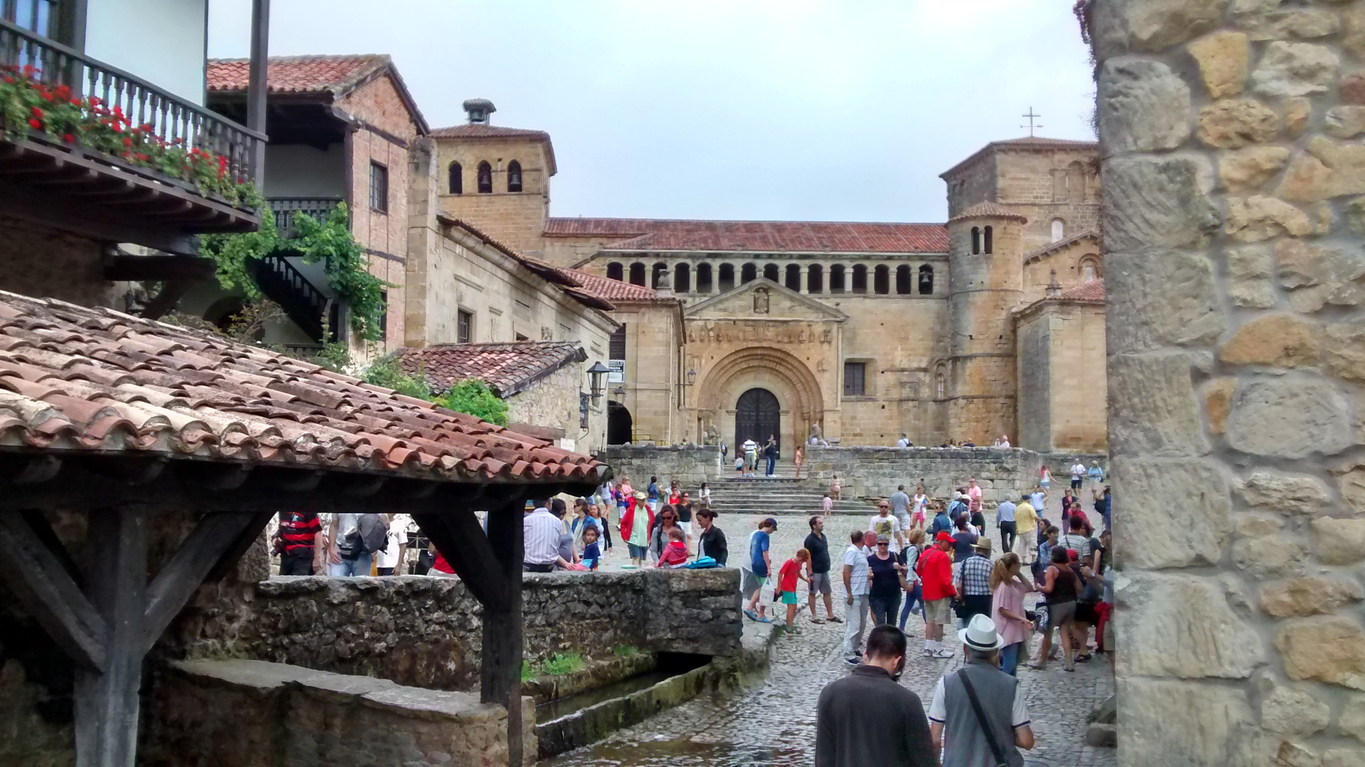 And as you might expect, many of the several thousand locals are involved in some way in the tourism industry, some running shops, restaurants, and accommodation (visitors should be sure to sample a local speciality, bizcocho con leche, fluffy white sponge cake accompanied by a cool glass of some of the creamiest milk you’ll ever drink). One establishment especially worth special mention – for dining or overnighting – is the Parador Gil Blas, one of Spain’s quasi-public network of inns, which occupies one of the historic family manses on Plaza Ramón Pelayo.

Many visitors also find their way to the historic treasures of outlying villages such as Mijares, Queveda, and Viveda, such as the Peredo and Viveda Palaces (17th and 18th centuries, respectively), and the doughty little 15th-century Torre de don Beltrán de la Cueva. You might also be surprised to learn one of Spain’s better zoos is also nearby, with more than 2,000 animals, along with a section recreating the flora and fauna of this area 14,000 years ago. Which brings me to…

This area’s other, even more special and astounding treasure is just a ten-minute drive from Santillana (and you can even walk it in a half hour). Discovered in 1879 and dubbed

“the Sixtine Chapel of paleolithic art”, Altamira Cave is the star of Spain’s cave-painting havens, a UNESCO World Heritage Site, and indeed one of the most spectacular caverns in all the world. It’s about 1,000 metres (3,280 feet) long – with artifacts as well as dramatic, monochrome and polychrome paintings of animals, human hands and faces, and abstract shapes, all dating back nearly 19,000 years.

Since 2015 it’s been open mostly to researchers only, though, with the exception of a lucky five each Friday of members of the general public, who are granted a highly programmed 40-minute tour of the highlights (unsurprisingly, these spots are booked many months in advance, so if you’re determined to try, plan well ahead).

However, the rest of us can still get a very good idea of the marvels to be found at the very well done Altamira National Museum and Research Centre nearby, where many of them from the main hall of the cave are reproduced, alongside with dioramas, artifacts, and various multimedia displays to contextualise it all. There are even hands-on workshops on the techniques used for cave painting.

Two blasts from the past amid some of Spain’s most bucolic scenery – what’s not to like?