One of the many attractive destinations in Colombia that has been attracting increasing attention among both holidaymakers and expatriates seeking a fantastic home is Medellín (sometimes dubbed Medallo) in the mountains of Antioquía department in the country’s northwest. With a fresh, moderate climate that’s earned it the moniker “the city of eternal spring” the country’s second largest urb left its dark past of drug violence behind and become one of the country’s most dynamic and innovative, with great museums, dining, nightlife, and most especially cultural scene.

First of I need to make a tip of the beret to Medellín’s very own world-famous native son, 87-year-old Fernando Botero, his painting and sculptures instantly recognisable for their  rotund, often whimsical  figures. You’ll find plenty of his work in the Museo de Arte Moderno de Medellín and the Museo de Antioquía, as well as in the Plaza de Botero right alongside the latter. Latin America’s greatest living artist indubitably put Medallo on the world cultural map, but a number of developments since – especially driven by its own communities – have continued to keep it there, such as…

For more than 30 years Medellín’s rubbish dump, in the northeast among one of its most densely populated slums, the Cerro de Moravia has become a symbol (along with a world-famous cable car and outdoor escalator – see below – serving other slums) of the city’s resurgence. Through the efforts of its residents, with the assistance of city hall, it’s been transformed into a colourful garden, which you can visit with guided tours as well as marvel at the transformation in its Centro Cultural de Moravia. 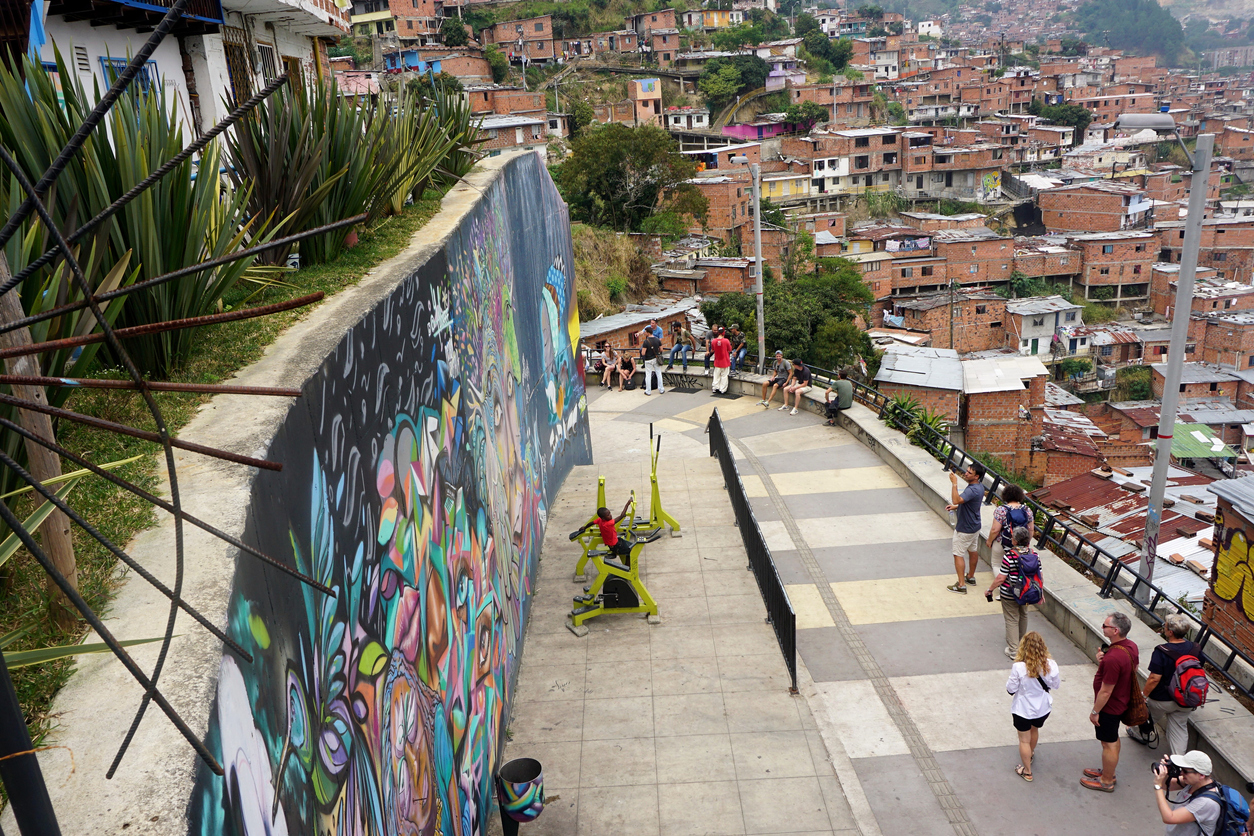 Also known as San Javier, located in the western part of central Medellín, Comuna 13 of all the city’s 16 comunas (districts) became perhaps the most notorious back in the 1980s and 1990s for its violence and drugs. But while still poor, this hilly neighbourhood since the mid-2000s has become transformed thanks to its residents, activists, municipal government – and street artists. And taking a tour of the area (you can find several online) from the San Javier metro station through the neighbourhoods La Independencia and 20 de Julio is one of the coolest things you can do in town, including some of its vibrant street murals (top). Be sure to take a ride on the abovementioned escalator (one of the world’s longest, in six sections), and have a look at the 13-year-old Presbítero José Luis Arroyave Library Park, its stepped cement architecture based on container boxes.

All of which shows that urban renewal and culture make a fantastic part of a visit to any city – and none more so than the one named several years ago as the world’s most innovative. Spring has truly sprung for real in the “city of eternal spring”.

More info at MedellinConventionBureau.com.
Read this post in Spanish.