Many flock to Catalonia for its bodacious beaches and the exciting urban life of Barcelona. But this region, located in the north-east of Spain, boardering France, is rolling hinterland harbours much else to enchant those who want to venture further. My own predilection, no matter where I travel in Europe, is time-capsule towns that transport you back to the Middle Ages (minus the many nasty bits, of course), and Catalonia has these in spades – among the most atmospheric on the continent. This blog has covered the region’s second largest city, Girona, with is fantastic mediaeval quarter, but arguably you feel even more lost in time in these nine smaller places. There’s not always a lot to “do” in them except soak up the ancient flavour, but for history and architecture junkies like me, that’s more than enough!

About a half hour from Girona and two hours from Barcelona, with a population of just 2,400, Besalú (top) is one of the most beautiful (and best known) of the bunch, whose mediaeval flavour starts with its 12th-century Romanesque bridge over the Fluvià River into the old town, but wandering its narrow cobblestone lanes will take you to landmarks like the Miqve (Jewish baths and synagogue), the Church of Sant Vicenç, and the Sant Pau Monastery, along with a Miniatures Museum. You can book guided tours in English through the local tourist office; ride horses in the lovely surrounding countryside; and there are also a number of fine restaurants as well as inns/bed and breakfasts for overnighting. 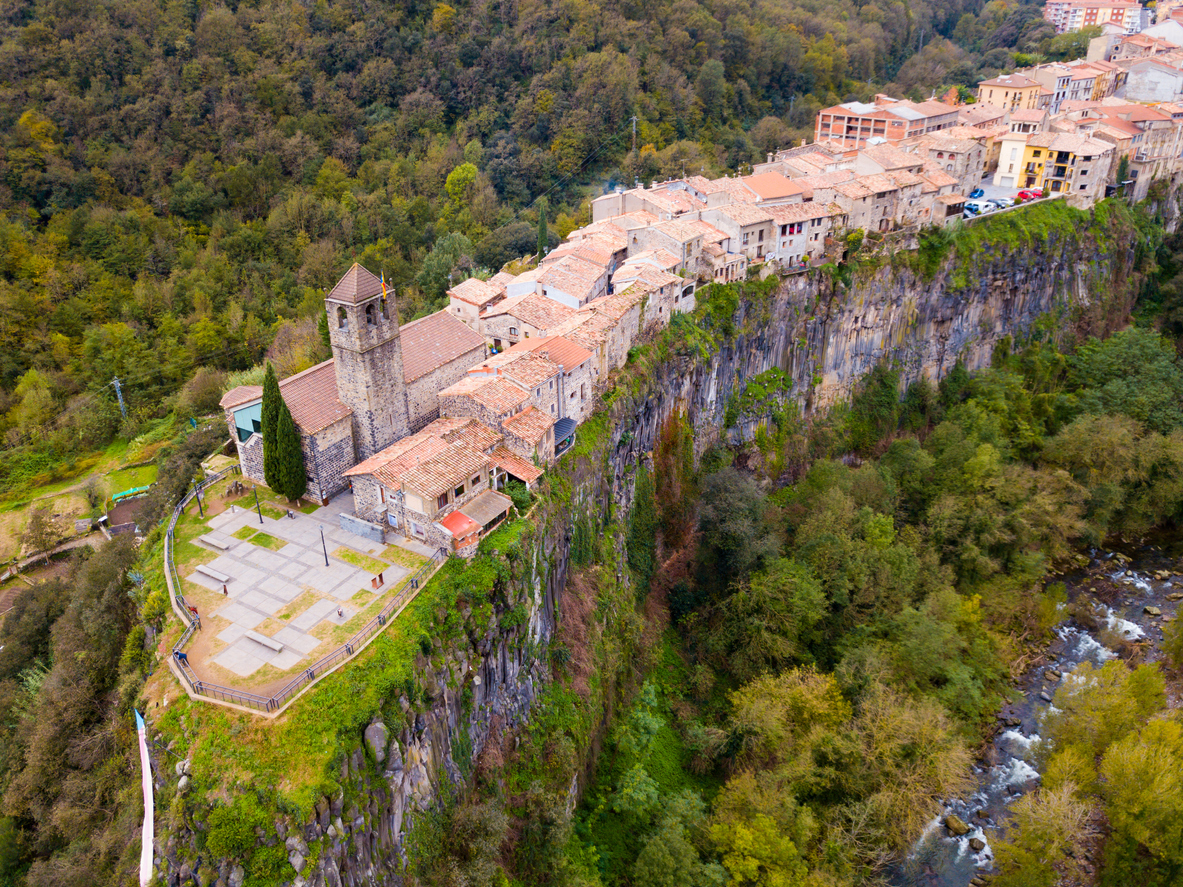 Also astride the Fluvià River, and just a 15-minute hop west of Besalú – therefore making it easy to see both in one day – Castellfollit de la Roca (“Blessed Castle of the Rock”) is even smaller (just over a thousand inhabitants) but if anything more dramatically set, atop craggy basalt cliffs plunging 50 metres (164 feet). Besides the stone houses and streets themselves, highlights include the 13th-century Sant Salvador Church (though the renovated façade is Renaissance), now a cultural centre; a Museu de l’Embotit (Sausage Museum), and of all things a Museo de Vietnam, one local’s labour of love about the Indochina conflict of the 1960s and 70s. 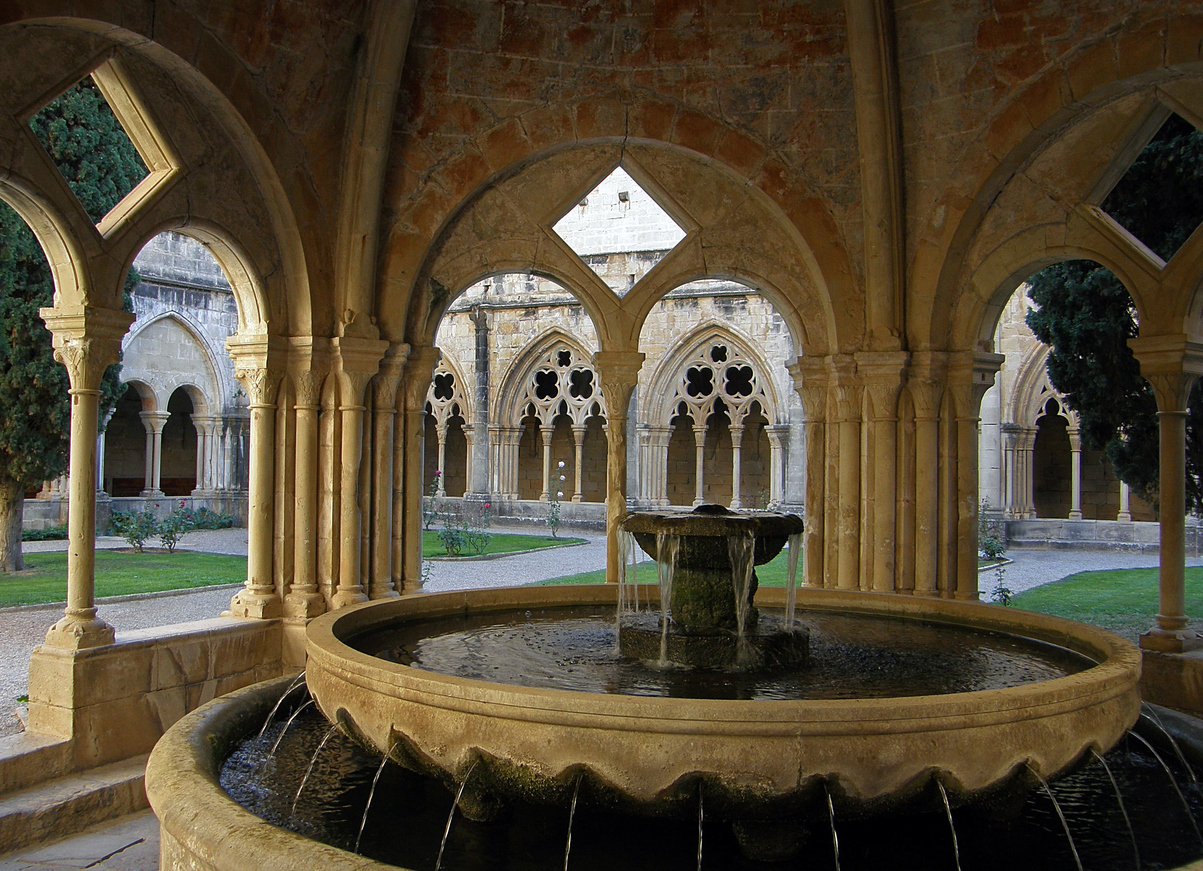 The Ruta del Cister refers primarily to the “Cistercian Triangle” of great sister monasteries founded by Cistercian (aka Trappist) monks or nuns in the 12th century. The most reknowned is Poblet, (founded in 1151, and due to corruption developed a bad reputation among locals), a UNESCO World Heritage Site at the foot of Tarragona province’s Prades Mountains, 40 minutes from Tarragona city and an hour 20 minutes from Barcelona. With thirty-something monks still in residence, visitors love exploring its buildings and grounds – particularly its lovely cloister. Also in Tarragona, Santes Creus (Holy Crosses), founded seven years later, is a similarly grand experience to visit, as is the third monastery, Santa Maria de Vallbona, up north in Urgell, documented back to 1157. Towns along the route include Guimerà, a limestone village of just over 300 souls in the on the Corb River in the province of Lleida and just over two hours from Girona and an hour and a half from Barcelona. First mentioned back in the early 11th century, its main landmarks are the 14th-century Santa María Church; remants of its 11th-century castle including a high watchtower; and nearby 13th century Vallsanta Cistercian convent; the town museum holds relics dating back to the pre-Roman Iberians.

In Girona province on the Costa Brava (the Platja de Pals being just one of many popular nearby beaches), this hill town of just over 2,500 features a restored Gothic quarter whose main standout is a 15-metre (49-foot) Romanesque clock tower, built in the 11th to 13th centuries, called the Torre de les Hores (Tower of the Hours). Additional points of interest include the Romanesque Church of Sant Pere and the town museum, the Museu-Casa de Cultura Ca La Pruna. Other popular nearby spots include Figueres (including its Salvador Dalí museum) and the ancient Greek ruins of Empùries. It’s about an hour and a half from Barcelona and 40 minutes from Girona. 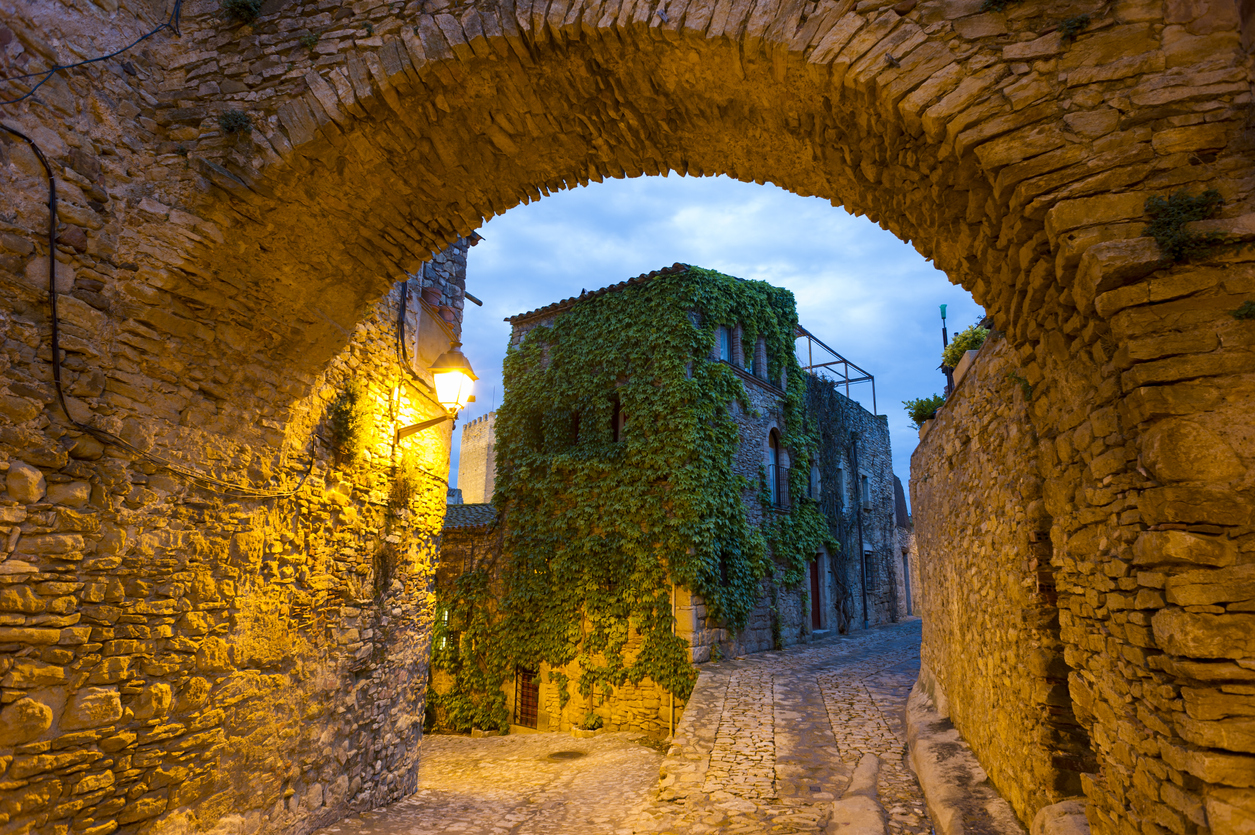 Just a ten-minute drive from Pals, this is considered to be one of Spain’s most beautiful villages, a maze of stone houses and cobblestone lanes still partly enclosed by its mediaeval walls (complete with moat) and dominated by its castle, built in the 11th through 14th centuries (also well worth a visit is the 13th-century Church of Sant Esteve outside the walls). These days shops, galleries, restaurants, and lodgings occupy many of the buildings in this old quarter – which is so atmospheric that the 1991 film Robin Hood: Prince of Thieves was partly shot here. 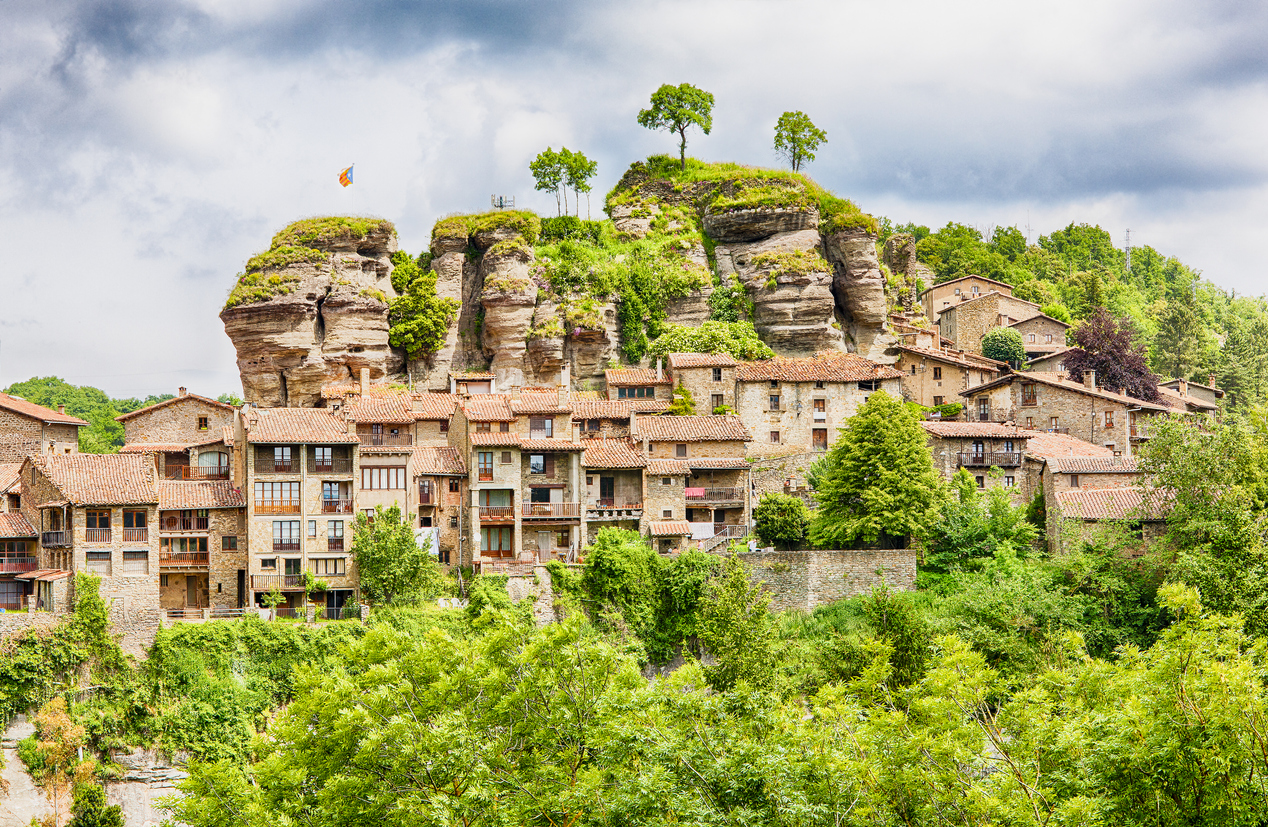 A small village (of just 300) in set in the wooded mountains of Barcelona province, an hour 40 minutes from Barcelona city and an hour 15 from Girona, the fairytale old town of Rupit i Pruit includes highlights like a castle and the Romanesque church Sant Joan de Fàbregues, both documented back to 968, as well as a hanging bridge over the local Riera de Rupit and nearby attractions like the 11th-century Benedictine monastery Sant Pere de Casserres; other ancient churches such as 12th-century Sant Llorenç Dosmunts, Sant Andreu de Pruit (originally Romanesque, rebuilt in 1427), and Baroque Sant Miquel de Rupit; and especially the Salt de Sallent , a waterfall thundering down from high cliffs. Plenty of shops, inns, and eateries cater to visitors, and if you’re one of them, be sure to try one of the local specialities, pork sausages such as fuet. It makes a good combination to explore along with the city of Vic, 50 minutes away (see below). 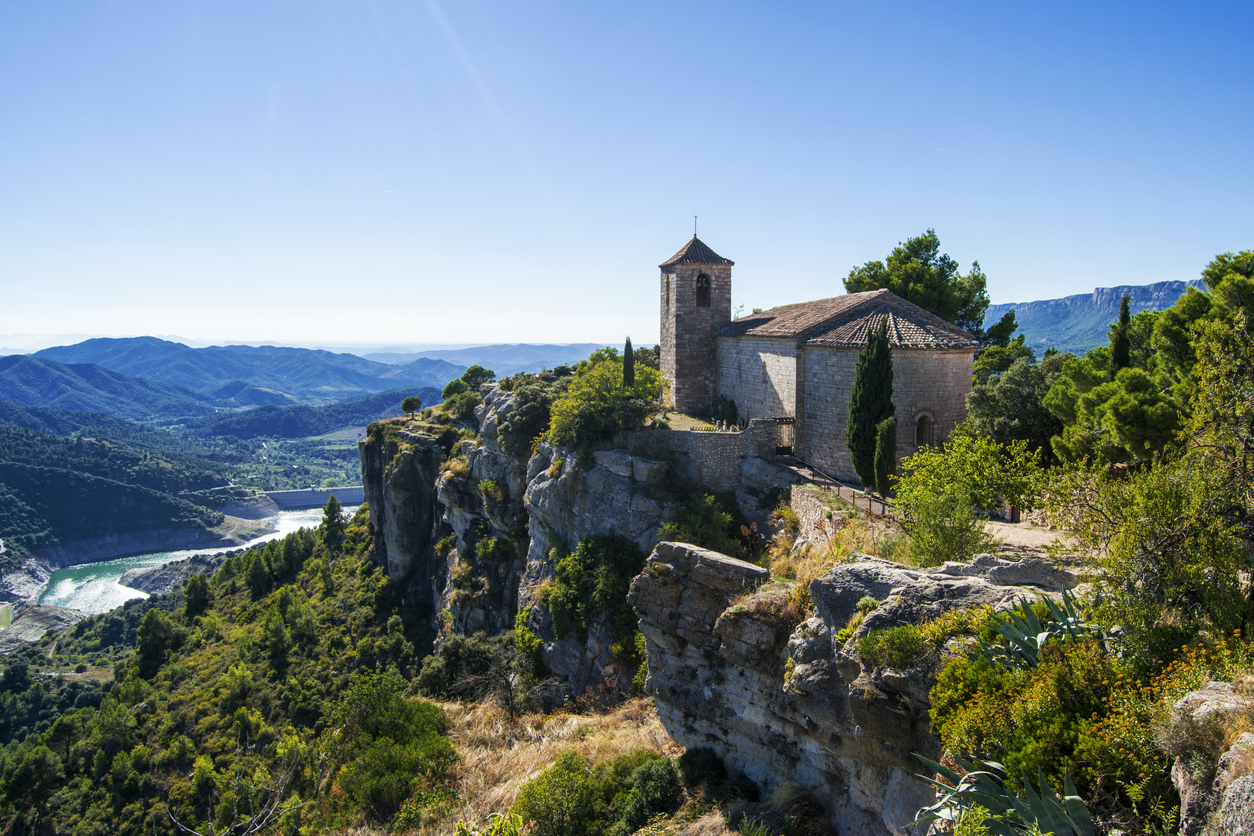 In this lesser known village than most others on this list, spectacularly situated on a cliff overlooking a reservoir in Tarragona province (an hour and a half southwest of Barcelona), standouts in and around its mediaeval core include the ruins of the Castell Àrab (a 9th-century Moorish castle from the time when Catalonia was under Islamic rule, and this was the last bastion to fall to the Christian Reconquest), the Romanesque Church of Santa Maria (12th-13th centuries).  Other fantastic local extras include some amazing hiking and world-reknowned rock climbing, as well as Priorat wine country, among Spain’s most esteemed wine regions (the region’s also known for its exceptional extra-virgin olive oil).

Located like Pals on the Costa Brava, but closer to Barcelona (just over an hour away), this little charmer (pop. 5,700) was settled even before the time of the Romans, and its Vila Vella is the coast’s only fortified village, with walls dating back to the 12th century. Highlights include the late-18th-century Hospital of Sant Miquel; the late-Gothic Governor’s House (now the municipal museum of archaeology and art); the remains of an ancient Roman villa, Els Ametllers rural villa (1st century BCE-6th century); and a trio of lovely beaches. (Fun fact: in 1989 Tossa became the world’s first municipality to declare itself “anti-bullfighting”.) 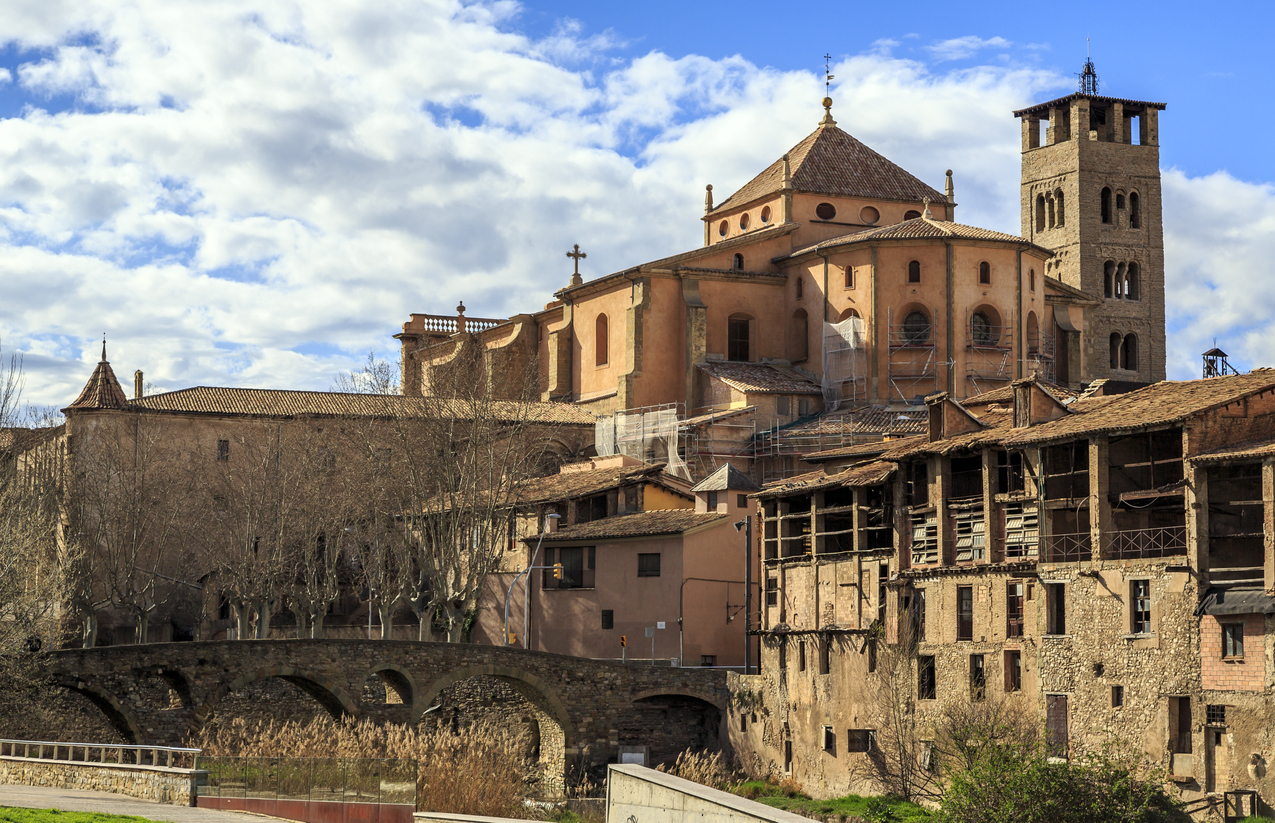 For something a bit larger, one of central Catalonia’s most important cities (pop. 42,000) conserves its magificent old quarter, centred around a handsome, arcade-lined Plaça Major (main square) – one of Catalonia’s finest – with its 14th-century Gothic city hall. In addition to the anicent houses both humble and stately, check out the excellent museum of mediaeval art; small Roman temple; 18th-century neoclassical Sant Pere Cathedral; and the 12th-century Episcopal Palace. Vic is also known for its eating (a particular local speciality being cured ham). It’s about an hour from Rupit (above), as well as Barcelona and Girona.