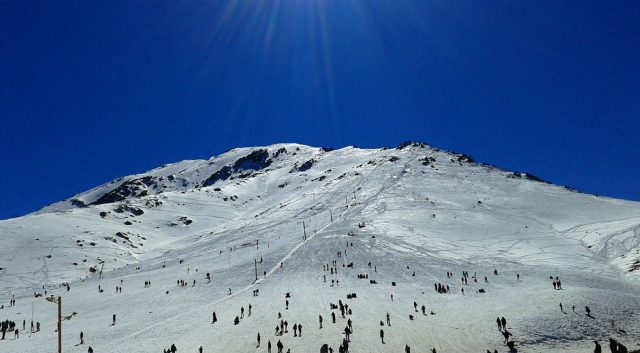 I daresay snow sport will come to no one’s mind when contemplating the fascinating North African country of Morocco. But more adventurous types might know that the high, craggy Atlas Mountains sweep across a goodly swath of this country, giving rise not just to a robust trekking and climbing scene, but even some pretty good skiing and snowboarding, with the season running January to early April – and what’s more, even within convenient distance of Marrakesh and Fez. Intrigued? Read on…

There are several ways to go about it, starting with the country’s two main winter resorts. About an hour 45 minutes south of Marrakesh, centred around the peak of Jebel Attar,  Oukaïmeden is Africa’s highest ski resort – between 2,600 and 3,268 metres (10,722 feet), with a vertical drop of around 1,000 m (3,280 ft.). Built in the 1940s by the French whose colony Morocco was until 1956, it hasn’t changed significantly since then; you can expect to see sheep and goats roaming the piste, as well as donkeys transporting skiers/snowboarders around the place and giving rides to those not schussing the slopes.

Oukaïmeden is served by one chair-lift and six drag-lifts; its longest run, also called Jebel Attar, is 3.2 kilometres (2 miles) from beginning to end, and other popular trails are the steep Grand Combe and the wider Pistes des Mouflons.

The runs usually remain uncrowded and they are not pisted, which is great after a fresh snowfall when there are light, dry powder conditions.  However, the absence of grooming means that the runs can become mogulled and rutted if there’s a long gap between snowfalls. The quality of the snow that you’ll find here is similar to the Alps, but the terrain is rockier and treeless.

There are a handful of hotels in town; a ski school with classes for beginners to more advanced; and a few rental shops for both ski equipment and clothing. On-piste kiosks sell snacks and there are a couple of restaurants serving French-Moroccan cuisine, but the après-ski is limited.

Make sure you rent from the official shops, rather than the unofficial street vendors you may see on the way up to the start of the ski area, and avoid being pressurised into renting from an ancient assortment of skis (with boots already in the bindings) laid out in the snow.

Another essential is to book your instructor through the Oukaïmeden Ski Instructors’ Association.  Avoid the “guides” hovering near the lifts, hassling to take you skiing/snowboarding, as they will be unofficial and may have no knowledge of the slopes or the snow conditions, let alone be able to ski to a reasonable level.

If you happen to be in Fez, outside Ifrane – a town just over an hour away, built by the French in the late 1920s and early 1930s as a “hill station” for the colonial occupiers to beat the heat – the luxury resort Michlifen Ifrane (michiflen means “snowflake”) offers just a kilometre (2/3 mile) of skiing/snowboarding, between 1,800 and 2,060 m up (6,168-6,759 ft.), with a pair of drag lifts.  You can stay out here and shuttle over to the mountain, or browse one of the online booking engines for one of the more modestly priced accommodations in the incongruously Alpine-style town (which also boasts an interesting souk where you can browse for traditional Berber crafts from the Atlas Mountains; please note, by the way: however fine a piece of headgear, a fez is no substitute for a ski helmet!).

Both these resorts are close enough to their respective big (and extremely interesting) cities that you can easily stay in Marrakesh or Fez and book day trips to the slopes, from Marrakesh to Oukaïmeden here or Fez to Ifrane with various local tour operators.

You can also opt for the luxury of heli-skiing. Heliski Marrakech is the only such operator in Africa, offering descents of more than 2,462 m (8,077 ft.). Based a half hour from Marrakesh in the Ourika Valley, it requires participants to be physically fit and to have notched up plenty of off-piste experience, with the ability to navigate all types of snow – whether powder, breakable crust, spring snow, or hard pack –  and on any gradient of terrain. The off-piste here isn’t extreme, but some pitches will certainly require a good level of proficiency.

So if you want to ski/snowboard somewhere exotic – and rather pleasantly chaotic – try combining a Morocco city break with some winter sports in the Atlas Mountains!

Felice Hardy is co-editor of the ski information website welove2ski.com.