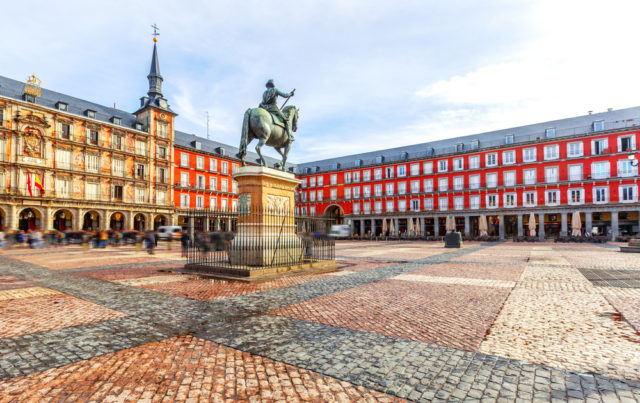 When I visit Madrid, I always make a point of stopping at least once for a drink or a feed in one of the focal points at the heart of the historic downtown – aka Madrid de los Austrias, Habsburg Madrid. The cobblestone Plaza Mayor (which means simply “main square”) is a short stroll southwest of Puerta del Sol – the local equivalent of Picadilly Circus or Times Square – and forms an impressive rectangle indeed, 129 by 94 metres (423 x 308 feet) in size.

Today it’s lined with bars, restaurants, and a handful shops, and apart from the occasional special event in the centre the equestrian statue of King Philip III (designed by 17th-century Flemish-Italian artist Giambologna), such as Madrid’s main annual Christmas market, the perimetre is covered with covered tables/chairs that make absolutely lovely places to linger a bit, whether by day or by night. 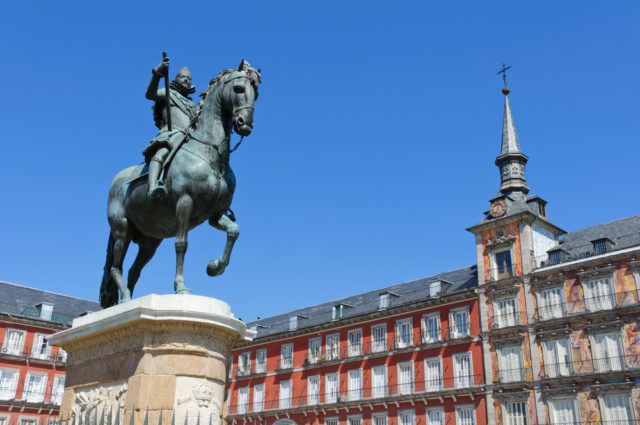 The plaza was largely designed by one Juan Gómez de Mora and started construction in 1617 (finished in 1619) under Philip II, who had moved the capital from Valladolid to Madrid decades earlier and ruled during what’s considered Spain‘s “golden age”. Over the centuries, this illustrious space witnessed and hosted all manner of activities – markets, bullfights and other spectacles, competitions, public executions, and of course lets not forget charming burnings at the stake of “heretics”, courtesy of the Spanish Inquisition. 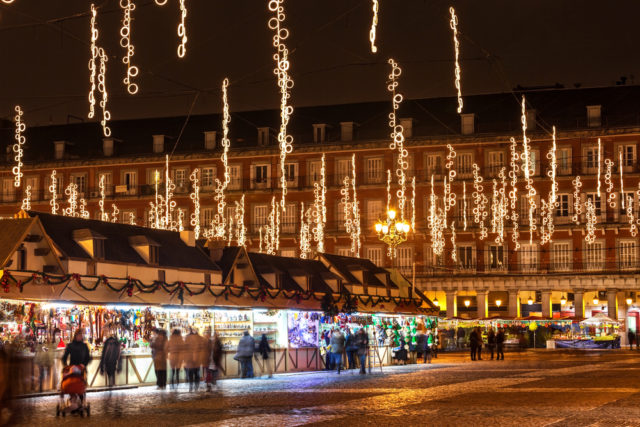 There are ten entrances from surrounding streets, including the most impressive, Arco de los Cuchilleros at the southwestern corner (below), with steps leading down to Calle Cuchilleros, a street also lined with traditional restaurants including the world’s oldest, Mesón Botín. Major buildings include the Casa de la Panadería, originally built in 1590 and serving as a bakery (panadería) and other uses, and today site of a cutting-edge tourism information centre, open 365 days a year, 12 hours a day. The frescoes on its façade depict mythological figures associated with Madrid history, such as the goddess Cybele (also subject of the famous fountain at the foot of Gran Vía). Another is the Casa de la Carnicería (general meat deposit) on the plaza’s south side, which spent some years housing municipal offices but is now empty, but expected to become home to a luxury hotel in the near future. 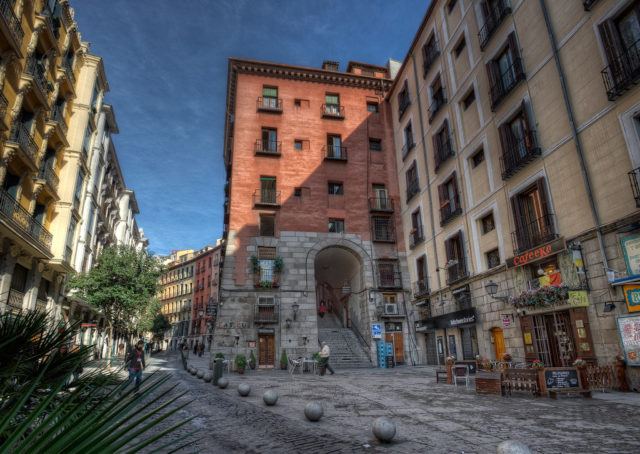 And this year, the red-brick façades, ground-floor arcades, slate roofs, and spires typical of the Habsburg dynasty are getting a facelift and a programme of rather more benign events and activities (theatre, concerts, exhibitions, and more) has been unfolding to celebrate the square’s quatercentenary.

For more information in English on the square and the events programme, check EsMadrid.com. And if you happen to be visiting very soon, for a fascinating look back at the plaza’s 400 years in words and pictures, check out at the very worthwhile Museum of the History of Madrid, running through through 11 November.