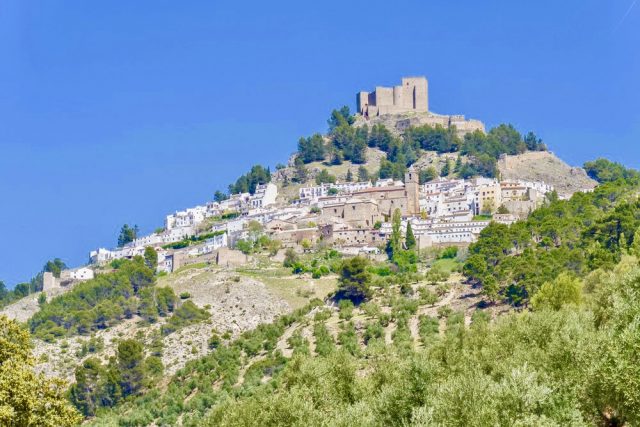 The association of Spain’s Most Beautiful Towns was established in 2011 following the success of the orignal Les Plus Beaux Villages de la France to  promote small and preferably rural towns. These days many towns are clamoring to join its ranks – now numbering 68 with the addition of 11 for 2018. Only charmers with fewer than 15,000 inhabitants and significant architectural or cultural heritage need apply, and only 20 percent of applicants truly meet the criteria.

I’m glad I’m not on the judging panel, it must be very hard to decide which to turn down. Having lived in Andalusia (specifically the Cazorla region of Jaén province) for more than 20 years, I’ve visited many beautiful towns and villages – many if not most of them also among the region’s famed pueblos blancos (white towns) – and I can attest that the dozen of the Pueblos Más Bonitos de España here in my backyard are just the tip of the iceberg. 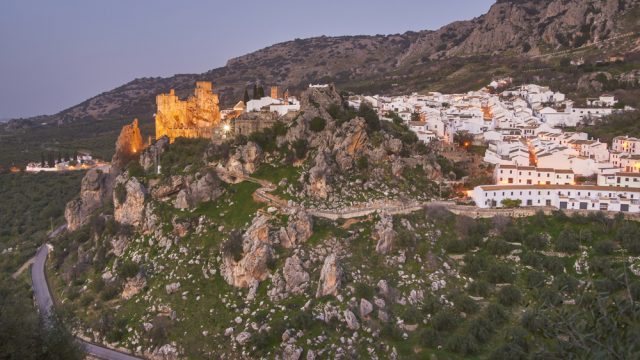 The one nearest to me – just an hour’s drive away in the province of Córdoba – is Zuheros, which seems to merge with the dramatic granite cliffs of the Subbética Natural Park.  Limewashed white houses dazzle in the sunshine, dominated by its 9th-century Moorish castle, with (usually) brilliant blue skies it’s a picture-postcard image. There’s also the Cuevas de los Murciélagos (Caves of the Bats) just behind the village, with cave paintings. An ideal visit in the height of summer but you’ll need a jumper down there as it descends 65 metres (213 feet) and some 700 steps, half going downwards and the rest back up.  A good time to visit, especially for foodies, is the third week in September when the Fiesta de Quesos (Cheese Fair) takes over the town for three days of workshops and cheese tastings.

And here are the other eleven, by province.

Once protected by Moorish city walls and seven towers (hence the “de las Torres”, of the towers) and dwarfed by mountains, this is a typical, pretty whitewashed village (pop. around 700), many of its houses sporting wrought-iron window bars flowing with bright red geraniums. Beginning in 1895, Lucainena was known for its iron mining, with enormous ovens were built to separate the iron from the rock, remnants of which can still be seen. 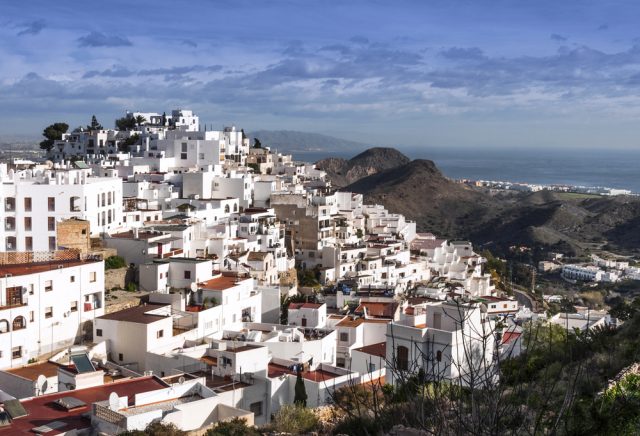 Down on the coast, this prosperous town of some 6,800 has become a popular beach resort, but it’s the whitewashed Moorish old quarter in the hills above the beach which most enchants, with its pretty squares, fountains, gates, and ubiquitous iterations of “Indalo Man”, a stylised stick figure originally found among the prehistoric paintings found in the Cave of the Signs in the north of Almería.

Over on the west side of Andalusia, the Grazalema Mountains Nature Park harbours another dreamy whitewashed town, of just over 2,200, traditionally devoted to small-scale agriculture and artisanal textiles (you can visit a museum devoted to the making of blankets and other woollens), and now increasingly devoted to tourism, especially thanks to hikers and climbers interested in the high limestone peaks nearby – which also give the area a damp to wet microclimate. 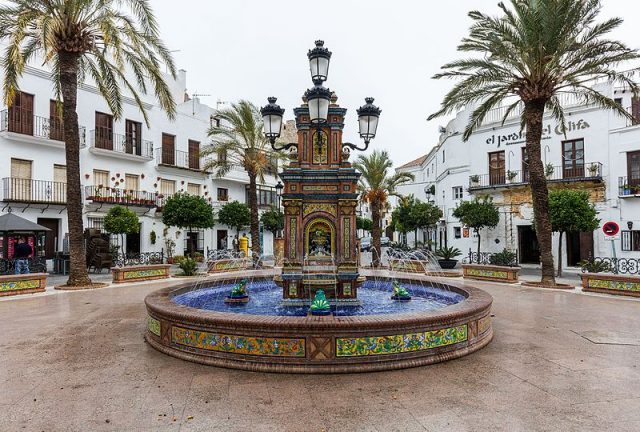 With a population just under 13,000, sitting on a hilltop just 10 kilometres (seven miles) from the Atlantic Ocean, Vejer boasts the prettiest of plazas with huge palm trees and a lovely old fountain adorned with traditional green-ceramic frogs (above). Head under the arch to discover the castellated town with pretty hidden corners and narrow, maze-like, cobbled streets. 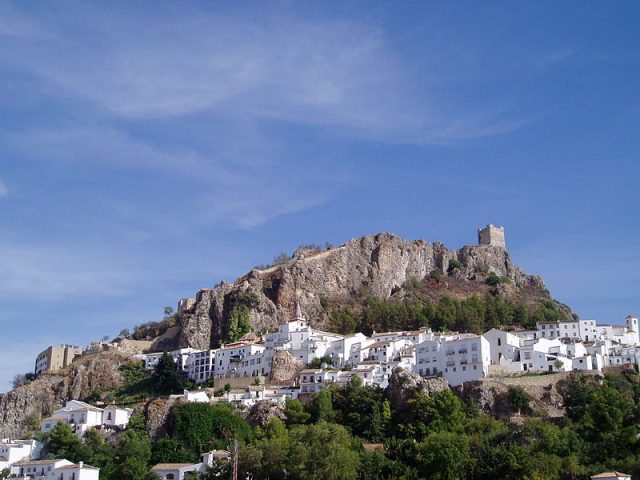 Another hilltop beauty (pop. just over 1,500), this former Moorish outpost that is new on the Pueblos Bonitos list this year is stunning both from a distance and within, with its steep narrow streets. The craggy-perched castle looms over the village with beautiful horizon-reaching views of the Zahara-El Gastor Reservoir.

One of some 50 lovely onetime Moorish towns in the Alpujarra region on the southern flank of the Sierra Nevada range, this tiny, sleepy white village of barely 400 souls was also added this year thanks to its traditional architecture of has features flat roofs, stubby round chimneys, balconies flowing with brightly flowering plants, and wood-beam-crowned passageways. And don’t miss the Casa Alpujarreña folk museum here. 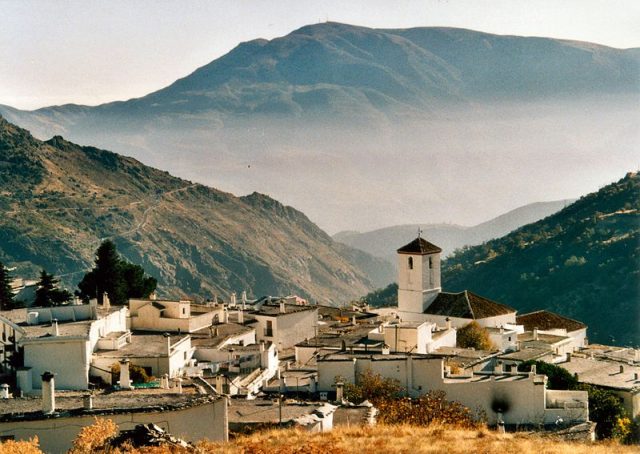 Right near Bubión, another tiny (pop. around 560) hiking/climbing hub, right near mainland Spain’s highest peak, Mulhacén (the town itself is a good 1,400 m/4,593 ft.) up. Another Capileira speciality is its traditional leather workshops, and must-visits include the 17th-century Church of Santa María Mayor and an interesting ethnological museum.

This neighbour of Bubión and Capileira, also hugging the slopes of the gorgeous Poqueira River gorge, is the tiniest of the three, with around 320 residents, featuring similar whitewashed houses and narrow streets, along with traditional crafts such as ceramics and textiles. And there’s an interesting recent addition right outside town: the Tibetan Buddhist monastery Onsel Ling. 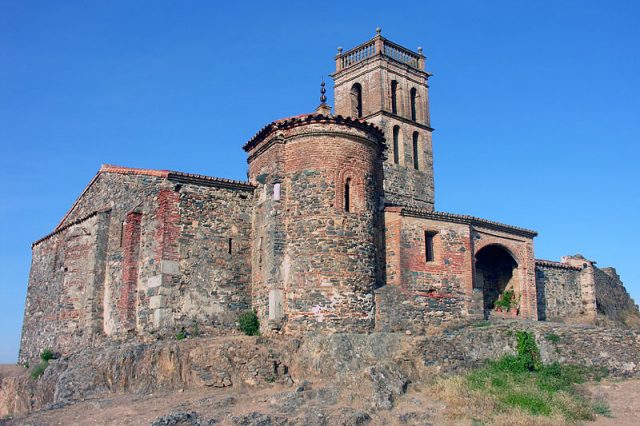 Also added in 2018, way up in the interior hills of Andalusia’s westernmost province, here the charming whitewashed architecture and warren of narrow streets is joined by its most important landmark, a small, oddly shaped 10th-century Mezquita (mosque) on the hill above, with horseshoe arches, ablution fountain, inscriptions in Arabic – and alongside it, a stone bullring. An Islamic-culture festival is held here in October, and Almonaster is also known for its May Cruces de Mayo festival, featuring traditional Andalusian costumes and lots of flowers.

Another 2018 addition, this hilltop town with a bit over 2,000 residents (above and top) is visible on its hilltop for miles around, crowned by the blocky Mudéjar Castle (great views of the spectacular surrounding panoramas) and an old town including several fetching old churches and surrounded by sections of its mediaeval defensive walls and towers. The castle includes evocative Moorish baths as well as displays on the history of Moorish Saqura. 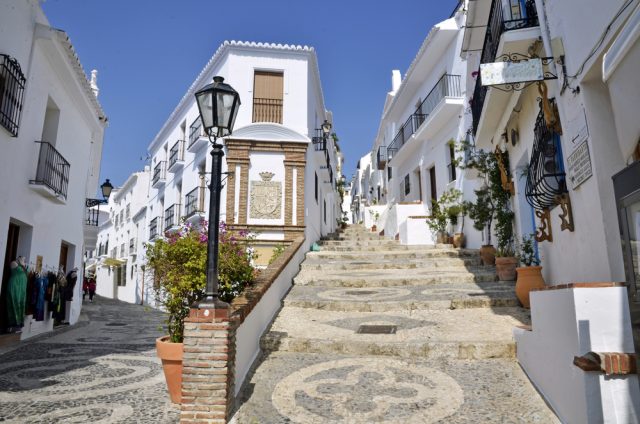 A delightful little white chocolate-box town in the hills about an hour east of Málaga city (and just north of Nerja), these days it’s something of an artists’ colony, surrounded by a vast nature reserve and known for its mosaic-adorned streets, pottery, ceramics, and locally produced wine. Highlights include an archaeological museum and El Ingenio, a 16th-century Renaissance palace now housing a molasses factory (not open to the public, though).

Rachel Webb has lived in Jaén province since moving from her native England with her husband and sons in 1996. When she’s not drinking Earl Grey tea or Spanish wine on her patio, she can be found exploring Spain and writing about it on her blogs Andalucia Explorer and Luxury Spain Travel while visiting boutique hotels to add to her portfolio Only Spain Boutique Hotels.