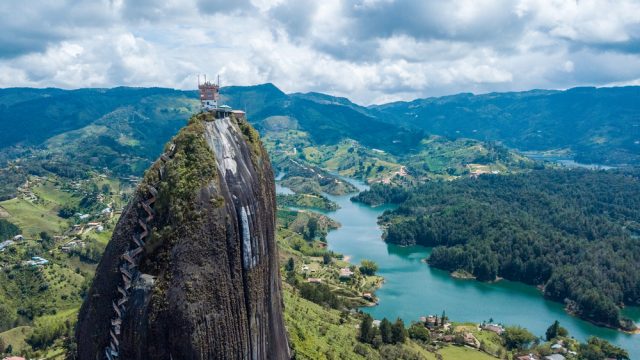 Colombia is just packed with remarkable landmarks, sights, and experiences, but on a recent visit I discovered that this vertiginous 220-metre (722-foot) hill, rising abruptly near a small town two hours from the city of Medellín, is in a class by itself. The Peñón de Guatapé (Rock of Guatapé, also known as the Piedra del Peñol, Stone of El Peñol), was venerated by the prehispanic Tahamí, and many visitors come to pay homage to it today – including some pretty sweet views from the top for those willing to trudge 740 steps up!

There have been several theories about the origins of this impressive granitic outcropping – an ancient meteorite, even an extinct volcano – but it’s thought most likely this mass was less fractured than the surrounding bedrock, and thus survived erosion over the aeons. The Peñón’s supernatural associations were echoed during the Spanish colonial period, with for example a legend growing up about how the Devil tried to carry it off several times and failed, but left an huge fissure along one of its sides – the same fissure used decades ago to build the zigzagging stone stairway all the way up. For centuries, the hill remained so daunting to locals that it was never climbed until 1954, when Luis Eduardo Villegas, the owner of the land upon which it sits, finally succeede, taking five days to scale the monster.

It’s also been a bone of contention between two neighbouring towns, Guatapé and Peñol, which have both laid claim to it (though clearly, the former has come out on top at least imaginewise, given the more widely used name for the rock). This rivalry led to a bizarre incident in the 1980s when the mayor of Guatapé along with the land’s owner decided to paint the town’s name on its flank. Some Peñol residents got wind of this, and came to protest en masse, stopping the massive graffitti after the letter G and the downstroke of the letter U – still visible today.

These days, of course, the rock is the single most popular tourist attraction of Antioquía province outside Medellín, and if you don’t want to hire a car, you can come fairly easily in public transportation or opt for a day excursion from one of the Medellín tour operators. There’s a little shop at the top, and halfway up you can also catch your breath at a little shrine to the Virgin Mary. And of course at the foot of the monolith you’ll find another of other shops and eateries – not a few operated by members of today’s Villegas family. 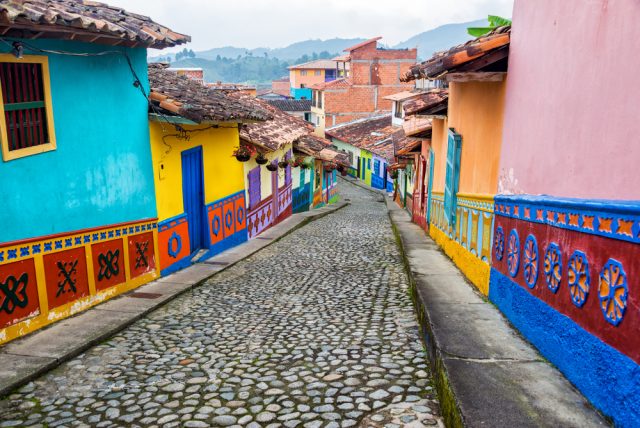 Just down the road from all is, the picturesque lakeside town of Guatapé (above), one of Colombia’s most uniquely colourful. This is actually a fairly recent development, as these things go – the 1950s, when local artist José María Parra tarted up the façade of his own house, and the practice spread first among his friends and neighbours on Guatapé’s best known street Calle del Recuerdo, then to many others in the town.

On weekends, the waterfront promenade is charmingly filled with locals enjoying the views and a variety of foods, art, and crafts vendors. There’s a zipline over the lake, and the nearby Peñol-Guatapé Reservoir (created in the 1970s) is popular for water sports and boat rides including attractions such as the ruins of La Manuela, the lakeside mansion of notorious narco-traffickers Pablo Escóbar, and various little islands, most notably “Fantasy Island”, with a swimming area, snack shacks, and a lovely view of the famous Peñón.