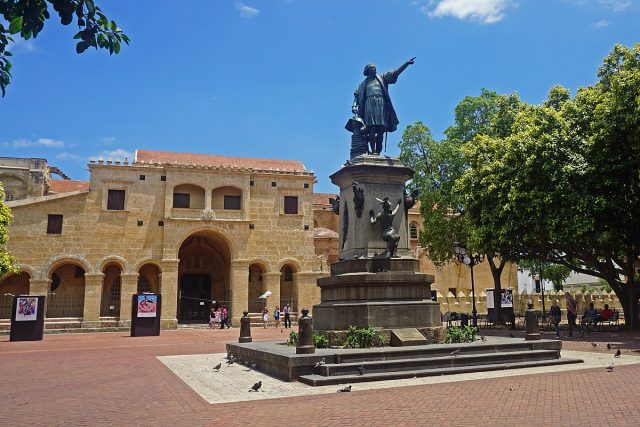 Thanks to both its appealingly tropical Caribbean and Spanish colonial vibes, the Dominican Republic has had a long history on the silver screen, both playing itself but more often playing other places both real and imagined. First the real…

Many movie scenes set in Havana have actually been shot in DR capital Santo Domingo. Perhaps the best known is The Godfather Part 2, filmed in 1974 in and around the city’s colonial district. In the film, Michael Corleone (Al Pacino) and his brother Fredo travel with business partner Hyman Roth (Lee Strasberg, based on the real-life mobster Meyer Lansky) and others in 1959 to Havana to look into business prospects in Fulgencio Batista‘s Cuba, just as the revolution overthrows Batista. A key scene was filmed at Santo Domingo’s imposing El Embajador Hotel, a mid-century Deco landmark of exactly that era – built in 1956.

It was on a wide, sunny terrace of the Embajador that a famous scene with Pacino, Strauss, and others was filmed, against the backdrop of the Centro de los Héroes neighbourhood and the azure Caribbean Sea off in the distance. The hotel also housed the film’s crew, of course, as well as other luminaries and celebrities over the years such as Hollywood heartthrob Rock Hudson (fun fact: another eventual Tinseltown A-lister, Steve McQueen, purportedly worked here as a carpenter in the 1950s before becoming a star). Even today, the Embajador remains something of a hub of film-related activity, such as hosting the Platino Awards for Iberoamerican Cinema.

Thirty years later, in 2005, the Embajador and Santo Domingo were called back to duty to play Havana in Andy García‘s The Lost City, (also starring Bill Murray as well as Dustin Hoffman as American mobster Meyer Lansky), which tells the story of a 1950s Havana nightclub owner against the backdrop of the Revolution.

A pair of other films with scenes shot in the colonial district both in 2005 are spy flick The Good Shepherd and  Miami Vice (though the latter used it as a stand-in for Haiti).

Most recently – just last year, in fact – the high-octane actioner xXx The Return of Xander Cage with Vin Deisel, shot some of its earliest location scenes in the town of Juan Dolio, an hour’s drive east of Santo Domingo and known especially to Dominicans as a beach resort, along with SD’s colonial quarter (particularly its central plaza, Colón Park, top). Quite a number of interior scenes were also shot at Pinewood Dominican Republic Studios, the local branch of a US-based international film-production empire, where the star is an 5,620-square-metre (60,500-sq.-foot) outdoor water tank (also used, by the way, in the 2017 thriller 47 Meters Down).

And speaking of big Vinny, his Fast and Furious 4 (2009) also kicked off its first 15-20 minutes hijacking a petrol truck on a beat-up road in the DR (though hardly a location worth visiting, LOL).

And now for the imaginary…

In 1978, Coppola returned to the DR for another outing for scenes in his surreal, immortal Vietnam War movie Apocalypse Now, with Marlon Brando, Robert Duvall, and Martin Sheen (and OMG, check out the young, pre-Star Wars Harrison Ford in the trailer above!). Though filmed mostly in the Philippines, several key scenes such as the helicopter attack were shot around the Chavón River outside the fetching south-coast city of La Romana, just under three hours east of Santo Domingo.

And when director George P. Cosmatos was scouting locations for Rambo First Blood II (1985), starring of course the musclebound Sylvester Stallone, he ended up using this same area, known for its sugarcane fields, lovely beaches, and superb offshore diving (one of the Caribbean’s most famous luxury resorts, Casa de Campo, is also here, as well as next-door Altos de Chavón, a lovely, quite realistic recreation of a 16th-century Mediterranean village built in the early 1980s with shops, restaurants, an archaeology museum, and an amphitheatre booking topnotch Dominican talent and shows as well as top-name international headliners).

The other major Hollywood director with a DR connectionis Steven Spielberg, who in 1992 centred his blockbuster Jurassic Park around a mosquito embedded in amber in the 32-year-old Amber Museum of the north-coast city of Puerto Plata with its charming Victorian downtown. (The scene where it appears, however, at the non-existent “Mano de Dios” amber mine, however, was filmed in Hawaii. Fun facts: There are no riverside amber mines in the DR, and that particular mosquito was a non-blood-sucker, negating it as a dino DNA carrier.)

In any case, come visit the Dominican Republic, and you’ll surely agree: this is a mighty cinematic destination indeed!