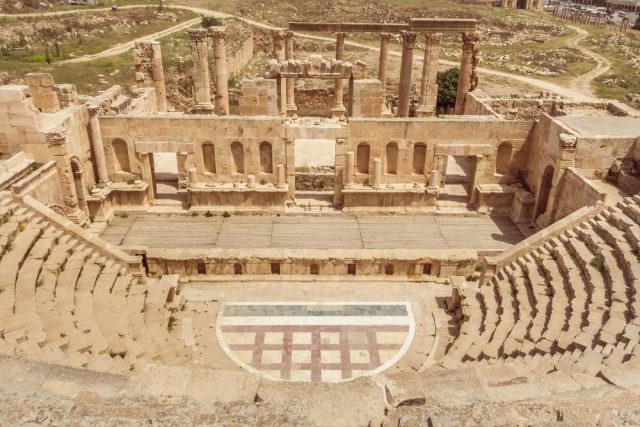 Israel’s neighbour Jordan is home to some the most fascinating excursions from Tel Aviv or Jerusalem. Top of the list for many, of course, is Petra, the jawdropping, 2nd-century city hewn out of living rock, and nearby Wadi Rum, a mix of dramatic natural scenery and more ancient historic sites, covered in this blog last year.

But many visitors tend to overlook several sites in the kingdom which are just as important and nearly as dramatic as Petra, best done in a two- or three-day itinerary out of capital Amman (a short flight from Tel Aviv) or with a car and driver from the Israel-Jordan border. 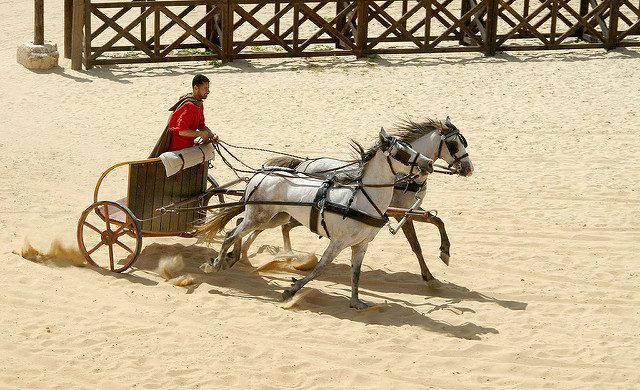 Just under an hour north of Amman, Gerash (top, now part of the modern city of Jerash) was one of the most important and prosperous cities of Graeco-Roman antiquity, founded by Alexander the Great in 331 BC. Once encircled by a doughty wall, it’s home to a forum, baths, a hippodrome, gorgeous private houses, markets, and shops. Emperors Hadrian and Trajan visited and were each honoured with a triumphal arch.

In 749 AD, disaster struck in the form of a major earthquake followed by others in later years; miraculously, none destroyed the buildings, but they did cover them in huge layers of sand. So this is why Gerash is one of world’s best preserved Roman monuments, where you can still sit on the same amphitheatre seats as the Romans did and stroll along the ruts left by ancient chariots.

The archaeological site is 80 hectares (198 acres), and you can wander for hours, letting the evocative cityscape help your imagination vividly recreate the days of the Roman Empire. There is also a museum with exhibits excavated from the site, even including two prehistoric skulls.  (Fun Fact No. 1: the ladies’ room doubles as an art gallery, with paintings by modern Jordan artists which the toilet attendant is happy to sell! Fun Fact No. 2: initial excavation was started in 1806 by German explorer Ulrich Jasper Seetzen – who happens to be a distant ancestor of mine!)

If you want to see it come to life even more (and don’t mind braving the blistering local summer), come the last week of July, when the Jerash Festival of Culture and Arts includes myriad performances of all types as well as Roman “legionnaires” in full battle dress, gladiators and chariot races (above) taking over the hippodrome.

Also in north Jordan, a half hour from Jerash and near the city of Irbid, Ajloun was built in 1183 to 1184 under the rule of the sultan Saladin, famous for his victories over the invading Crusaders. Especially impressive from a distance because of its hilltop location, overlooking three wadis (ravines) which connect to the Jordan Valley, the stronghold was meant to keep the area’s Bedouin tribes in check. Four huge corner towers are connected with thick walls punctuated by slits for archers, and there’s a moat 16 metres (52 feet) wide.

Cross the bridge and explore the courtyard, keep, ramparts, towers, and the mysterious stone rooms – some of which now house a museum including weapons such as huge stone cannon balls. The view from the top of the castle out over the valley is really something.

And by the way, on your way to the next castle, I highly recommend enjoying a coffee from one of the many colourful coffee vendors which line the roadside. The coffee is strong and sweet, and the silver pots they brew it in are real works of art.

Just over three hours south of Ajloun and a half hour from Petra, this too is a 12th-century castle (1115, to be precise), but built by the other side – Crusaders under the French king of Jerusalem, Baudouin I – to protect the routes from Egypt to Damascus. Originally called Montreal (Mount Royal), its sits atop a hill surrounded by a wild and rather barren landscape.  Less restored than the other castles, it has a more adventurous, Indiana Jones kind of vibe, with many secret passages and a hidden spring which can only be reached by venturing down 375 steep and rather slippery steps. Sturdy walking shoes and a good torch are a must, but it’s worth the effort for a very special adventure of discovery.

Heading back north, 2½ hours from Shobak, this 817-metre-high (2,680-ft.) ridge is, according to the bible, where Moses first caught a glimpse of the promised land. He never reached it himself, of course, but died here. Christian and Jewish traditions vary as to where he was really buried, some say in an unknown tomb in adjoining kingdom of Moab, but in any event, there’s a memorial at the summit as well as a pair of ancient excavated churches. You get a great eyeful of the Dead Sea, and on clear days you can see Jericho over on the West Bank, and even Jerusalem. 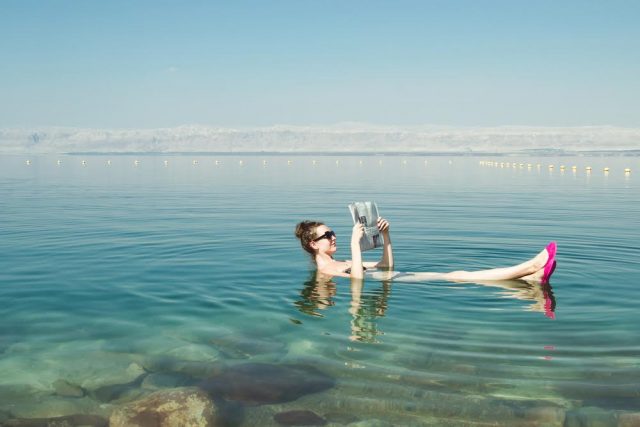 Speaking of the Dead Sea, the most popular resort on its Jordanian shore is Amman Beach, a half hour from Mt. Nebo and some 90 minutes from the capital. It’s a nice public strand with plenty of umbrellas, two swimming pools, changing rooms, and a batch of restaurants and cafés. Women can bathe in swimsuits, but many locals do so fully covered.

A rather pebbly and stony path leads down to the sea itself. Being in the water is an odd experience; it drifts you, but you can’t swim a stroke, and even walking back to shore (always with swim shoes because the ground is rocky and sharp) is an effort. Many visitors cover themselves with the famous Dead Sea mud, reputed to do wonders for the skin. All in all, this is a quite unique experience all travellers should have once in their lives.

My favourite accommodations here, a very short drive away, are the Holiday Inn Resort in Sweimeh and the somewhat more upscale Kempinski Hotel in Ishtar.

A Word About Logistics

From Amman, a number of good tour operators can take you on this itinerary, such as Jordan Direct Tours, Jordan Select Tours, and Petra Nights Tours.

From Israel, take a taxi to the border (arranging to have that or another taxi pick you up at the same place on the way back), at one of three crossing points: the Yitzhak Rabin Terminal/Wadi Araba Crossing, the King Hussein Bridge (Allenby) Terminal, and the Jordan River/Sheikh Hussein Crossing.  After arrival, go into the Israel customs shed and pay your exit visa, then walk on to the Jordan immigration shed and do exactly the same (you can buy both exit and re-entry visas at once, in both cases). There are many taxis waiting on the Jordan side, and you can reach an agreement on price (while making sure the driver speaks good enough English for your comfort).

A final note about photography: It’s fine to use your smartphones and cameras are fine, but never take pictures of people without asking their permissions first and stay away from anything that might even remotely look like a military installation (they’re not always marked as such). And don’t even think about bringing a drone!

More information: VisitJordan.com; specifics on crossing can be found here and here.

Best fares to Tel Aviv from the USA, from Spain.

Inka Piegsa-Quischotte is an attorney turned travel writer/photographer, currently living in Alicante, Spain, whose work has appeared at GoNomad, GoWorldTravel, EuropeupClose, and BBC Travel. Her blog GlamourGrannyTravels.com is dedicated to female baby boomers who love to travel in style and comfort.