by Ed Salvato/Man About World

All of that makes the diversity and sheer excitement of this part of the world even more appealing to gay people across the board, but there are a select few destinations which have become particularly welcoming. So I’ve put together my top seven LatAm gay travel choices to add to my previous recommendations in Europe and the USA/Canada.

Ever more visitors are discovering the many attractions and charms of Colombia, from pristine beaches to adventure and historic cities and towns. And while many travelers see its capital as little more than transit point to hurry through on their way to, say, lovely colonial Cartagena, they’re definitely missing out. Sprawling, busy Bogotá is one of the most interesting and compelling cities to visit in “new” Colombia, especially for gay folks.

And if you can get here for Pride in early July, it’s a rollicking good time. Note that at 8,300 feet (2,640 meters) above sea level, Bogotá has a temperate climate year round but that altitude may affect visitors differently, so you may want to go easy the first day or two.

The “Paris of South America”, Argentina’s capital is known for tango and beef, but it’s also been a trailblazer of equality and individualism with its advances in same-sex marriage and transgender rights, making it an LGBT beacon for Latin America. All the energy and vitality of a large (pop. 3 million), bustling city is mingled with uniquely laid-back attitude. Porteños are unusually friendly and welcoming, and these days, gay people are woven uncontroversially into the social fabric.

Along with its share of gritty areas, the city is also full of parks and extremely fetching neighbourhoods. These most notably include Recoleta (opulent, old-money; classic, European-inspired architecture; cafés/boutique shopping; home to the famous Recoleta Cemetery); San Telmo (the oldest neighborhood dating to the 17th century, and today its cobblestone streets and colonial architecture home to galleries, cafés, a famous flea market, and an avant garde mix of bohemian colour and faded grandeur); Puerto Madero (gentrified chic, with pleasant dock views, modern condos, and glass-front eateries, great for strolling/dining); and La Boca (the city’s vibrant heart, a splash-painted picture book of funky colours and old row houses – a bit touristy in spots but still with loads of quirky personality, photo-ops, and some silly fun; avoid at night).

B.A. has a “gay barrio”, too – that would be Palermo Viejo, broken down into Palermo Soho and Palermo Hollywood. Many of the clubs, bars, restaurants, and homo hostelries are to be found here including favourites of mine such as Caffè Lattente for coffee; The Steve for tapas; and Miravida Soho Hotel and Wine Bar for those fabulous Argentine vinos. Pride is in November (exact dates this year TBA).

Long an ecotourism and beaches powerhouse popular with backpackers, nature lovers, adventure-lovers, along with some sophisticates, Costa Rica was recently found in a survey to be “the happiest place on Earth”, and holds particular appeal for gay travelers. The live-and-let-live attitude of generally open and welcoming Ticos (locals) reflects their acceptance of the growing gay presence and movement in this peaceful, verdant Central American nation, which has been growing increasingly prosperous yet protecting its Eden-like biodiversity, lush rain forests, and pristine beaches. 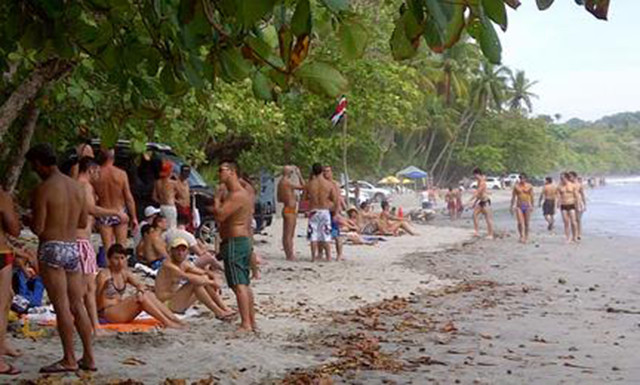 Add to this mix a thriving gay community in both the capital San José and the Pacific beach towns of Quepos and next-door Manuel Antonio, it’s no surprise the country has firmly implanted itself on the gaydar of savvy travelers. In San José, be sure to check out Puchos, which attracts guys in their 20s to 40s (at least partly with hot go-go boys!). In Manuel Antonio, there are three marvelous LGBT-popular beaches: Playa Espadilla, Playitas, and Machas, along with several gay guesthouses/resorts, restaurants, and nightspots.

Definitively gone are the bad old days when gays were persecuted and imprisoned. The LGBT scene has been semi-open here since the 1990s, and especially of late, a surprising revolution on the behalf of the community has been led by straight activist Mariela Castro-Espín, the 48-year-old daughter of president Raúl Castro and niece of Fidel. As a result, Cuba though still not legalising marriage equality has actually become one of the more progressive countries in LatAm on sexuality and social issues, observing for example the annual International Day Against Homophobia (IDAHO) in Havana this past May. 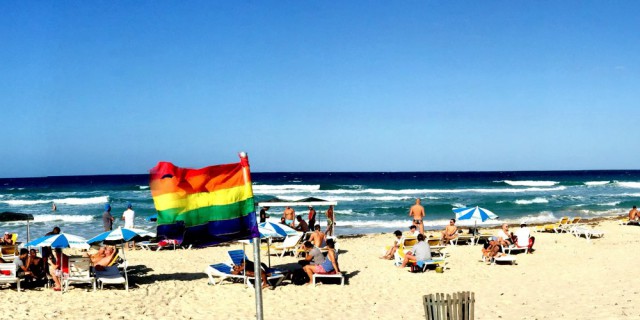 Especially with the new U.S. opening to Cuba and economic relaxation by the regime, a good chunk of Havana is booming, and of course its famous beauty and sights on display as never before (though much of the rest of the city remains crumbling), such as Old Havana’s Cathedral Square, Arms Square, and colonial fortresses; several cigar factories; fascinating museums like the Fine Arts and the Museum of the Revolution; grande dame hotels like the Nacional; and Ernest Hemingway bars such as La Bodeguita del Medio and El Floridita. Hang out on the waterfront Malecón, where many locals – very much including gay people – socialise.

In fact, despite advances, gay life still takes place mostly on the streets, especially along the Malecón but also around the Varadero district’s Yara Cinema as well as Coppelia across the street, a local ice cream institution. Several regular club nights have also developed recently, such as Il Divino at Café Cantante, beneath the Teatro Nacional (National Theatre). You can safely and confidently ask a taxi driver to take you to the latest gay venues and pop-up hotspots (could be a house, a social club, even a farm field on the outskirts). Want to hit the beach? The unofficial gay strand is Mi Cayito (above), several miles east of Havana in Playas del Este.

Do keep in mind that that Havana is far from a luxury destination; hotels are limited (AirBnB and other flat rentals predominate), as is other infrastructure such as Internet access. By the way, while U.S. citizens are of course much more free to visit now, with commercial flights resuming later this year from several cities, there are still rules (and here’s a good summary of them).

Many if not most holidaymakers head for Mexico’s coastal resorts with miles and miles of white sand beaches, vibrant towns, secluded coves, and spectacular resorts. But city tourism is also enormously rewarding, and nowhere more so than the enormous capital of 20 million people, whose bad rap due mostly to crime in its grittier areas is belied by an amazing, often downright glamorous cultural, dining, fashion, and nightlife scene. Not confined to Mexico City’s 150 museums, you’ll find art here out in public everywhere, from sidewalk benches along Paseo de la Reforma, the city’s grand thoroughfare, to colourful murals in the metro and sculptures that perch atop busy intersections.

For gay travelers, Mexico City is particularly welcome. Same-sex couples could marry here as early as 2010, and while the social climate in much of Mexico is still more don’t ask/don’t tell, the attitude in DF (for Distrito Federal) is increasingly gay-friendly and accepting, and gay nightlife and social opportunities abound in neighbourhoods such as the Zona Rosa (especially along Calle Amberes, pretty much the local gay village); Centro Histórico, with myriad cultural and historical sites; and hip Roma. and Condesa (try Tom’s Leather). Pride runs for five days in late June.

With 300 sunny days and a warm tropical climate, perhaps LatAm’s top gay destination is this picturesque, vibrant beach city on the Pacific, which has been attracting gringo holidaymakers since the 1960s with a diverse offering of dining, shopping, culture, nightlife, and fabulous hotels/resorts in and near town, and eco/adventure in the surrounding mountains and jungles. (Dining in particular is a star, with PV’s Annual Gourmet Festival each November attracting dozens of chefs and thousands of visitors from all over the world.)

Pride is held for 12 days in late May (2017 dates TBA), but the gay scene is fun all year round with some two dozen LGBT nightspots and especially popular with visitors during at New Year’s. No matter when you go, be sure to go to the beach and/or have drinks at Blue Chairs, the fun and frisky gay resort complex. 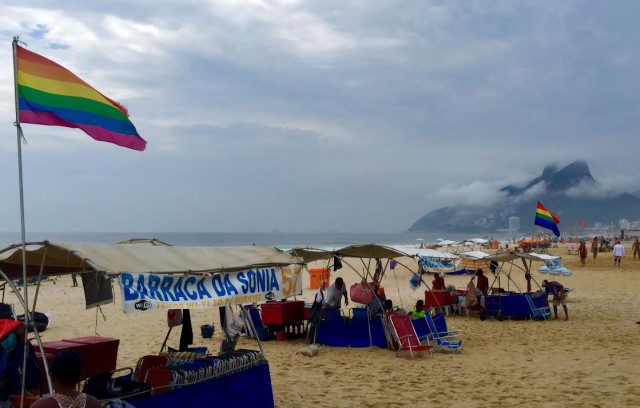 With more than six million people (Brazil’s largest city after São Paulo), Rio beyond its famous beaches Copacabana and Ipanema is a dynamic, multifaceted urban destination with a wealth of attractions set amidst the one of the planet’s most stunning landscapes. And though it’s about to be put to the test by the upcoming Summer Olympics, Rio today is better than ever to visit, with reduced street crime, and spiffed up infrastructure (including a great, new, air conditioned Underground), and remains a unique place for an unforgettable holiday any time of year.

And despite all its historic/cultural sites, beauty spots such as Sugarloaf and Corcovado, and hip neighbourhoods like Santa Teresa, it’s the beaches that most define Rio — not just that they’re there, but the way that they shape the sensuous rhythms of everyday life. It is quite common to see Cariocas (locals) both male and female walking the city sidewalks in bikinis and Havianas (Brazil’s own ubiquitous brand of rubber thongs), jostling with suited businessmen and black-clad widows heading to church at midday.

The small gay village here is centred around Ipanema’s Rua Farme do Amoedo, which ends in the Praia da Farme gay beach (above; there’s another gay strand at Praia da Bolsa across from the Copacabana Palace hotel). But the dozens of LGBT bars and clubs are really spread throughout the city.

If you’re not making it here for the Games, by the way, Rio loves a party any time of year, and there are plenty of others to choose from. Carnaval (in 2017, February 24-28) is the biggest, naturally, but there’s also the Rock in Rio music festival (this September 18-27), of course Rio Pride (this year a November date TBA), and various others throughout the year.