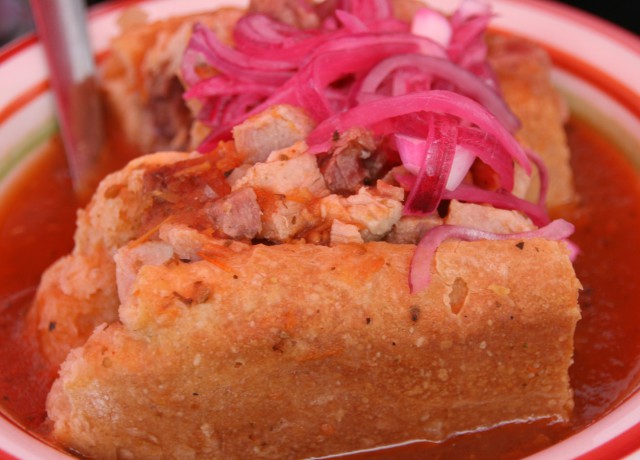 I’ve always felt that a country’s greatness is not defined merely by its history but many other factors – and high on that list, its culinary traditions. And perhaps more than any other country in the Western Hemisphere, it’s in this area that México shines brightly – to the point where its cuisine was in 2010 declared an UNESCO Intangible Patrimony of Humanity.

Furthermore, though many throughout the world think of Mexican cuisine as the Tex-Mex staples of tacos, burritos, and the like, the fact is that as in Europe, the USA, India, and other places with complex gastronomic landscapes, there are many regional variations less well known outside the country.

In the state that gave us mariachi and tequila, and which includes Puerto Vallarta and Mexico’s second-largest city, Guadalajara, the “drowned sandwich” (top) is a culinary icon. It starts with locally made birote bread, which is necessarily crusty on the outside (you’ll see why soon enough) and soft on the inside. This is then filled with juicy pork, red onion, lettuce, and spritzed with some fresh lemon juice. But the key part comes last: the whole thing is drenched or “drowned” in a red-chili-pepper-based sauce (less spicy versions are often also available, with tomato-based sauce). That of course is why the bread has to be nice and crusty, of course! And as you can imagine, this can get pretty messy, and some restaurants even provide rubber or plastic gloves to minimise the “damage”. Whatever though – this is a fun and incredibly tasty Jalisco treat! 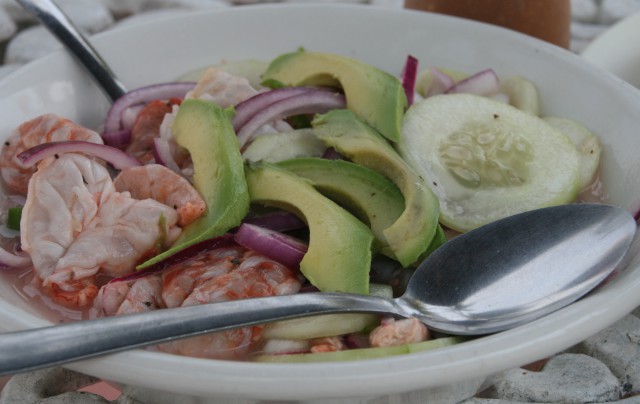 I confess a particular weakness for this usually shrimp-based dish, kind of a ceviche, submerged in a spicy mix of lime juice, one or more types of chili pepper, and coriander. To this tangy mixture is added cucumber, red onion, and avocado, and often served with corn nacho chips. True heat enthusiasts (or masochists!) will then shake even more chili sauce over their aguachile. But in any case, there are few things more tasty and refreshing than enjoying this invigorating treat on a beach – or anywhere overlooking the Pacific, really.

Oaxaca is known as a gastronomic powerhouse, and a local favourite is tlayudas, crunchy corn tortillas some 30-40 centimetres (12-16 inches) around, covered with a meat (chicken, beef, or pork) plus some classic Mexican ingredients: mozzarella-like Oaxaca cheese, refried beans, lettuce, avocado, and salsa of varying heat (other variations have also developed over the years). It’s especially popular as a street food and in marketplaces; many locals eat it accompanied by tasajo, thinly sliced grilled beef. 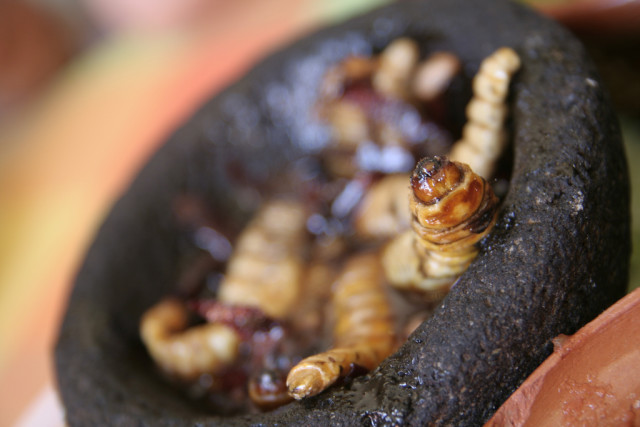 More than perhaps any other Latin Americans, many Mexicans still enthusiastically enjoy pre-Hispanic foods – some of which can, well, give visitors pause, to say the least. A perfect example is chapulines – toasted grasshoppers, eaten loose or in a quesadilla.

Or how about gusanos de maguey (above), worms harvested from the leaves of the agave plant in central Mexico and eaten deep fried, braised, and with various classic dressings in tacos and tortillas.

And let’s not forget escamoles, eggs from ants found amid agave roots, highly prized in and around Mexico City (some even refer to it as Mexican caviar). With a buttery, slightly nutty taste, they’re commonly sautéed in butter and garlic or a pungent local herb called epazote. 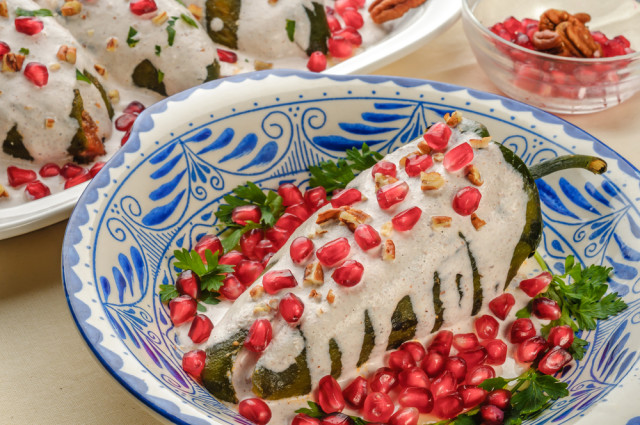 If the dish above looks unusually colourful, it’s because it was designed to evoke the Mexican flag. Invented by nuns in the 1820s in Puebla  (also home of mole poblano, a rich chocolate-based sauce used over turkey or chicken), the dish consists of (non-spicy) poblano chiles stuffed with chopped meat laced with apples, pears, and peaches. All that is then drizzled with walnut sauce and garnished with parseley and red pomegranate seeds. It’s especially popular in August and leading up to Mexican Independence Day on 16 September. A lovely mix of flavours, textures, and colours.

Come enjoy all of this in situ with best Iberia fares to Mexico from the U.K., from Spain.

Miguel Martínez, a Seville-born journalist and current resident of Mexico City, is passionate about traditional cuisine and the recipes of yesteryear. You may visit his blog at RecetasTradicionales.com.