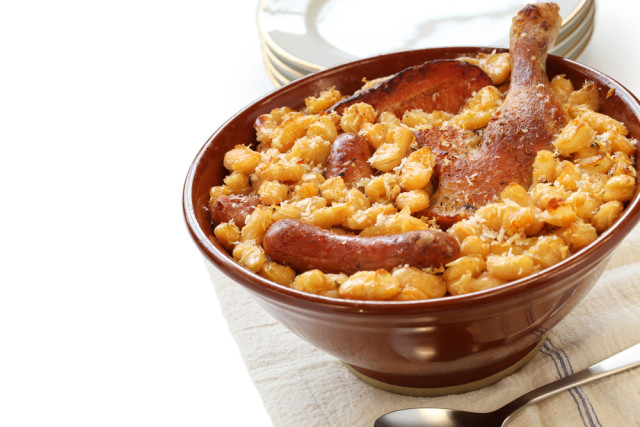 France’s since most popular dish, and one of the greatest contributions of the south of France to deliciousness in the world, cassoulet is a rich, savoury a bean stew (similar to the likes of fabada in northern Spain’s Asturias and feijoada in Brazil). It’s believed to have originated as peasant fare in the Middle Ages in the region around Toulouse, and has become especially popular since World War II, and to visit Languédoc and not sample cassoulet at least once would be a terrible oversight.

The indispensible key ingredients are white beans, duck confit, and Toulouse pork sausages. In addition, there are variations depending on the individual region and who’s doing the cooking (some recipes for example add lamb and/or goose). All ingredients should be locally grown, and the beans must be elongated, meaty, and with a very fine skin. Preparation should be slow and methodical (in fact, a good 48 hours is necessary for a truly good preparation).

It’s possible the secret of cassoulet may be the cassoles, the traditional conical earthenware pot in which they’re prepared. Glazed inside and made with a special mix of clays which maximise the cooking heat and its dispersion to make sure all the ingredients are properly cooked. They should be locally made by hand at workshops like Not Frères, a few kilometres south of Toulouse, which provides cassoles to many of the restaurants of the Midi-Pyrénées and Castelnaudary. And they say that the older and more used the cassole, the more delicious the cassoulet.

If you find yourself in this part of France, a couple of spots worth the trip for an exception cassoulet are La Dinée, in Port Lauragais down the A61 some 20 minutes south of Toulouse, or rather more centrally at the city´s Chez Emile in the Place Saint-Georges. True story about this place, by the way. Its chef about a decade ago prepared cassoulet for the heads of state of France, the U.K., Spain, and Germany on the occasion of the presentation of the Airbus A-380 (Airbus is based in Toulouse), the chef was asked to serve it using silver service. The gentleman quite rightly refused, because after all, cassoulet without its cassole is unthinkable!