Even if you’ve been not just to Buenos Aires but also the pampas, Mendoza, Córdoba, Patagonia, and Iguazú Falls, that still leaves much more wonderful stuff to explore in Argentina. I recently took the sunny city of Salta in the far north of the country as the stepping-off point for a 900-kilometre (560-mile) round trip, with only the first 90 minutes’ drive outside the city on paved road. It’s an area that is so little known that in some parts they see almost no visitors all year round.

Though its name is thought to derive from pre-Hispanic languages (most likely the Aymara for “very beautiful”), salt is in fact a local phenomenon, as Salta is the gateway to the third biggest salt flats in all the Americas. A two-hour flight from Buenos Aires, the city was founded in 1582 by the forces of Spanish conquistador Hernando de Lerma, and located in the Lerma Valley close to the frontiers with Chile, Bolivia and Paraguay – once part of the southern Inca empire and afterward an important trade entrepot. Not only is it a distant 600 kilometres (373 miles) from the capital but also long ways away in culture and feel, as well. The heat, for example, is tropical, and even the people look more exotically Andean than in B.A.

Salta has a lovely colonial old quarter including a handsome cathedral (above); buzzing dining and nightlife district on/around Calle Balcarce; and a wide range of hotels, from business-style to boutique. Local museums boast a wealth of fascinating pre-Columbian artifacts and material; not to be missed in particular is the fascinating MAAM (Museum of High Altitude Archaeology) with its three child mummies unearthed near the extinct Llullallaico volcano in 1999. Together with their perfectly-preserved 500-year-old bodies were found dolls, sandals made from llama leather, pottery, jewellery, tiny male llama figurines, and, um, a nit comb (the fascination of seeing the mummies is tempered by the unpleasant knowledge that the sacrificial children – all chosen for their beauty at six, seven and 15 years old – had been buried alive, with the idea that they would go on to become gods).

Much more pleasant is the cable-car ride up to the city viewpoint. From the top you can see over all of Salta, which stretches 25 km by 7 km  (17×4 miles) – small enough that you can navigate its streets on foot.

A pair of local restaurantes I love are Café del Tiempo (Balcarce 901) for its steak and the delicious local red wine, and especially La Casona del Molino, tucked away in a quieter area at Calle Luis Burela 1; it serves huge tapas-style dishes of mashed corn and cheese or meat and potatoes – wrapped in corn leaves, each one is almost a meal in its own right.

Two hours’ drive from Salta, we come across a giant canyon with a dry riverbed, wild horses, vicuñas and llamas, dramatic rock formations, and hillsides dotted with cacti taller than humans.

Later we arrive at Alfarcito, a hamlet made up of a small school and craft shop. In this area, it only rains six days a year – but we were here on one of those rare days! The proceeds of the craft shop pay for local children to go to the school, and some of the buildings have been created from recycled plastic bottles cemented in place by mud.

Then’s on to San Antonio de los Cobres, at 3,775 m. (12,385 ft.) one of Argentina’s highest inhabited settlements, where spending any amount of time here means you are liable to feel dehydrated or get a headache. Indeed, soroche (altitude sickness) is a problem for many, and the remedy -is to chew coca leaves, which you can buy from grocery stores (if you can find one). The leaves, which have the texture of bay leaves, are to be chewed by the mouthful. They taste bitter to me, but are said to be good for digestion and altitude sickness. The locals have a pouch of it in their cheek most of the time. 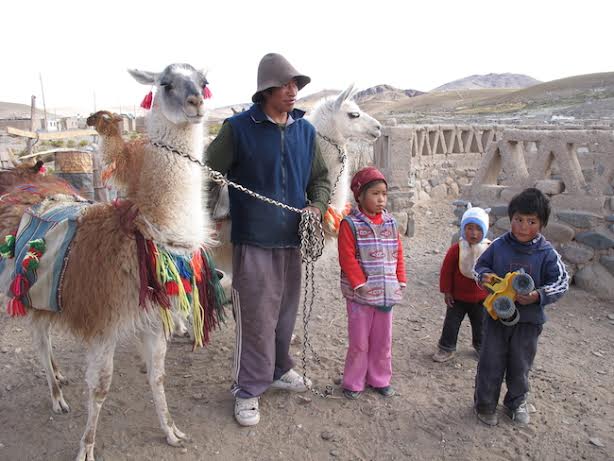 We visit the handicrafts market, where everything is llama-flavoured, from the stalls selling delightful knitted hats, jumpers, socks, and toys to foods – not really to my taste, honestly – such as llama salami, mutton, and sausages (including blood sausages). For dinner, we eat deliciously crispy empanadas at 5 pesos (38p) each, stuffed with cheese, vegetables or – yes, llama mince. For the main course, I choose the ravioli at 45 pesos (£3.45) rather than the llama a la pimienta at 48 pesos (£3.68). Wine is 20 pesos (£1.53) a glass, soft drinks 15 pesos (£1.15).

A visit to a local llama farm, Anatolio y sus Llamas (check it out on YouTube), is one of the highlights of the trip. The sweet and shy animals have their manes braided with multicoloured ribbons and feathers. Anatolio’s entire family are involved in the farm, and his small children lead the friendliest of the llamas over to us to be stroked. We are told about their diet (alfafa and maize) and maintenance. We overnight at the Hostería La Esperanza (Avenida Grierson s/n), but unfortunately, we don’t have enough time for the two-hour llama trek!

Three hours’ drive from San Antonio, the “Devil’s Desert” looks a lot like Monument Valley in Utah or Jordan’s Petra, with its weirdly-shaped rocks in shades of blood-red and sunset yellow. We drive on towards the Chilean border and see the snow-capped Andes in the distance ahead.

A must-see, two hours from the village of Tolar Grande, is Siete Curvas (above) – a bit like the Grand Canyon, but without any people there (at present, only 500 visitors a year visit the area). The rock formations look like little islands floating in a deep chocolate sea. You can trek here with a guide, even camp out overnight on the mineral mica terrain – which breaks away in your hand like peanut brittle. Apart from mica, the dramatic scenery around here is made up of malachite, quartz, flint and volcanic rock. 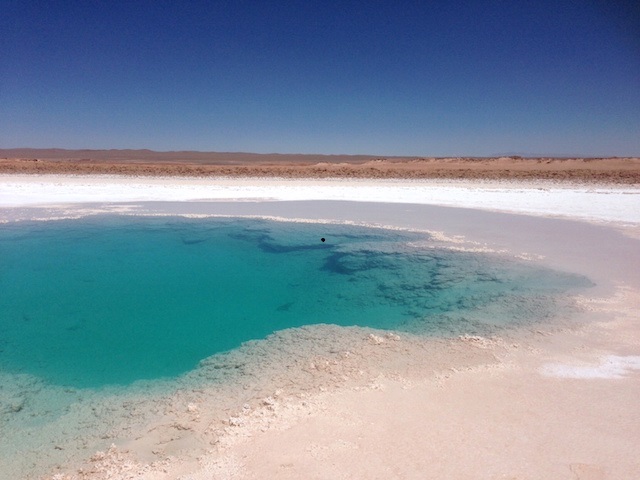 One of the most stupendous sights on my journey two bright turquoise pools near the town of Tolar Grande, surrounded by what looks like white-sand beaches. When I get closer I realise that in fact it’s salt, not sand, and if you’re very hardy apparently you can even take a dip in one of the pools (they’re frigid!). All this with a backdrop of the Chilean Andes and, at the same time, the desert. The bleakly beautiful scenery is almost unbelievable.

We then drive to the heart of the puna and on to Tolar Grande. The word “puna” comes from the Quechua (Inca) language and is used to describe the high-altitude area in the Andes above the treeline at 3,200 m. (10,500 ft.) and below the permanent snowline of 5,000 m. (16,400 ft.). Argentina’s most remote area, it runs across the plateau of southern Peru and Bolivia into northern Argentina and Chile.

Tolar Grande (above) is a mining town of fewer than 300 inhabitants, with an old section of adobe houses and a newer one in more contemporary style. The immediate area is rich in minerals such as sulphur, lead, iron, zinc, and of course salt, and the town has its own generator which closes down at midnight.

Hostería Casa Andina is the sole hotel, next door to the town’s only restaurant where you eat whatever the owner/chef, in his baggy T-shirt and tracksuit pants, is dishing up that day – usually some variation of meat with either potatoes or rice, and no vegetables; the only fruit we see is floating in the fruit jelly. Pudding is a slice of yellow cheese with a sweet-potato jelly on top. Breakfast is local bollo, a hard and crusty bread. It’s certainly simple fare, but you really do get that pioneering feeling being here – we’re now eight hours away from Salta via dusty, mainly unpaved roads.

A 90-minute evening drive takes us along the salt flats of Salar de Arizaro, along a road that’s more like a ploughed field. From here you can trek a half hour across the lunar landscape to the base of Cono de Arita, a remarkable volcanic formation within the salt mine. The surrounding terrain isn’t flat at all – more like boulders of frozen mud spattered with salt.

If you you’ve ever marvelled at the Grand Canyon, Petra, Uluru or other majestic, iconic rock formations, than you’re in for a real treat in Argentina’s relatively unexplored north. Yes, the food away from the city of Salta is simple, but the accommodation is improving all the time – and for the true traveller, the experience in itself is in any case a feast like no other.

Felice Hardy is co-editor of WeLove2Ski.com and also writes about adventure travel for a range of publications.