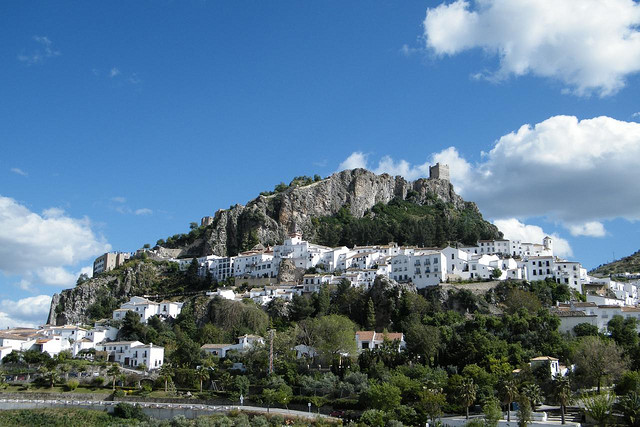 Among the lower-key and higher-altitude glories of southern Spain are its charming hill towns, especially some two dozen whitewashed villages in the north of Malaga and especially Cadiz – and most particularly the Sierra de Grazalema mountain range not far from Jerez, which have come to be known as the pueblos blancos (white villages). The Sierra de Grazalema Nature Park and Los Alcornocales Nature Park are popular with hikers in the spring and even the winter, and thus so is the cluster of villages here that cling to the hillsides like visions out of the mediaeval Moorish past of al-Andalus, with their narrow, twisting lanes, tiled roofs, and geraniums in the windows.

Clifftop Arcos de la Frontera, one of the larger and most distinguished of these towns, is the gateway to the Grazalema range. From here on in there’s a marvelous array of experiences on offer, with pleasures both great and small. Sample the delectable asparagus for which Alcalá del Valle is famous; visit the neolithic sites of Algodonales; stroll the evocative 8th-century Nasrid District of Benaocaz; go birdwatching on the Bornos Reservoir; explore the botanical garden in El Bosque; learn how a local version of the bagpipe is made in El Gastor; marvel at the ancient Roman ruins built on a settlement of neolithic Iberian tribes in Espera; buy fine mantas (woollen blankets) in Grazalema and leather items in Ubrique; climb up to triangular Moorish castle of Olvera; and take pictures of the striking houses built right into the cliffs of Setenil de las Bodegas.

The mountains bring forth caves, chasms, grottos, and of course plenty of the distinctive local pinsapos (Spanish firs), a species that grows only in this region. Water falls from the sky (believe it or not, the rain in Spain falls mainly right up here – yes, even more than in the country’s green north), but also springs from the earth in the form of waterfalls and streams, to the delight of hikers. One of the most popular routes is the Vía Verde, a onetime railway track of which 35 kilometres (22 miles) is walkable. Along the way you’ll spot griffon vultures wheeling overhead – and you can join them in the sky, flying delta wings and gliders in areas nearby like Puerto de las Palomas or Sierra de Líjar. In fact, there’s quite a bit of adventure on the menu hereabouts, including canyoning in the Garganta Verde; caving in the Sima del Cacao and the Sima del Republicano; even sailing and canoing on the Guadalcacín II Reservoir.

All that adventure is bound to work up an appetite, and the local take on Spanish cuisine in mountain inns will more than deliver – meals up here can be long and hearty. In addition to all the usual Spanish and Andalusian suspects, you’ve got specialities including game dishes like pheasant, venison, partridge, and rabbit. And don’t forget about the extraordinary payoya goat cheese, made from goats indigenous to these mountains, and lomo en manteca (pork loin slow-cooked in lard – yes, a cholesterol bomb for sure, but for a one-time treat oh, so tasty). Sweets like pestiños (honey- or sugar-glazed fried dough), piñonates (pine nut cakes), y roscos de huevo (sugared egg-and-flour doughnuts) complete the party in your mouth. And if you’re worried about all those calories – well, don’t forget, you’ve already likely burned off quite a few with all that hiking, gliding, canoeing, and whatnot! 😉

More information in English at Andalucia.org and CadizTurismo.com. Flights to Jerez from the UK, from the USA.