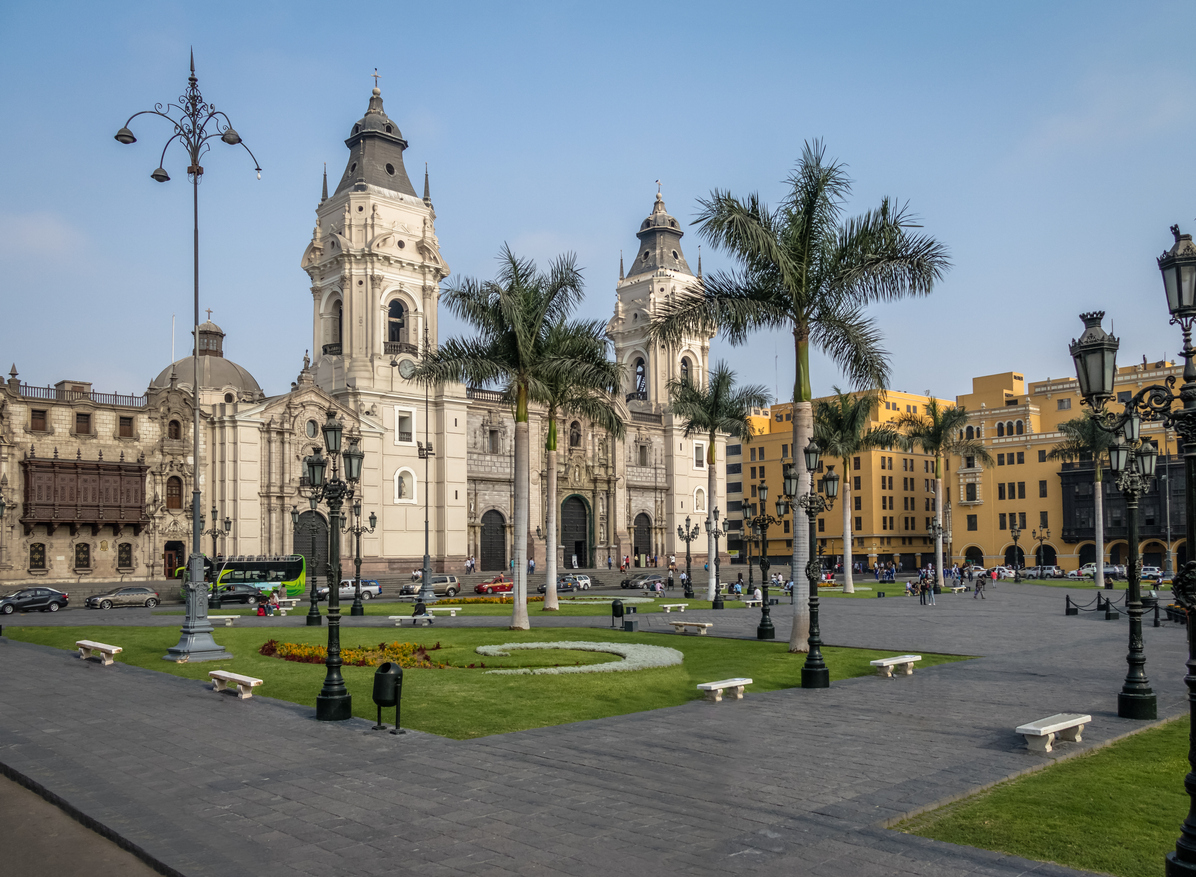 So packed is Peru with spectacular sights and experiences, from the jungles of the Amazon to the heights of Machu Picchu, that for visitors its capital on the Pacific Ocean can sometimes get lost in the shuffle. But it’s a mistake to pass it by, as some do, because this is one of South America’s most interesting cities, starting with its historic downtown, a UNESCO World Heritage Site of ochre and orange façades, stone churches, wooden balconies, and parks leafy with centuries-old trees.

This core is where Lima was founded by Spanish conquistador Francisco Pizarro in 1535, where today visitors can stroll the elegant Plaza de San Martín, Plaza Mayor, and Plaza de la Catedral, the last with its namesake 16th-century cathedral’s impressive exterior bathed at night in a golden light that brings to mind the gold that obsessively drove the Spaniards back then.

Nearby is the Palace of Government, the political centre of Peru, and the monument to Taulichusco, the last Inca ruler of the region that became Lima. Next to the Church of San Francisco the pigeons fly; underneath it, things are considerably quieter, as this is the site of Lima’s first cemetery – you can go down and see the remains of nearly 25,000 people. And of course the city is full of opportunities for less macabre historical exploration, too, such as the National Museum of Archaeology, Anthropology and History, housed in an old colonial mansion on Plaza Bolívar, and the Peru Gold Museum, with a brilliant collection not just of pre-Columbian auriferous artifacts but also of world weaponry.

One of Lima’s most prominent upscale districts worth visiting is Miraflores, from where you can see the ocean and various aromas mingle, especially the sea air and foods of all kinds. There’s so much to choose from here, such as jalea (mixed fried seafood), tiradito (thinly sliced raw fish, like carpaccio, in a spicy sauce), chupe (thick, hearty soup), chicharrón (pork rib), and of course the national dish, ceviche (or cebiche as it’s often spelled here), seafood cured with lemon juice and prepared in different variants. Another site not to miss here is a fascinating pre-Columbian ruin that also predates the Inca, Huaca Pucllana (right). For a little more hipster/boho flair, head to the Barranco neighbourhood, where you’ll find the Puente de los Suspiros (Bridge of Sighs), a romantic wooden walkway which crosses the over to the beach. The rest of the district is made up of streets lined with 1920’s Art Deco houses, bars, restaurants, shops, and galleries.

Come suppertime, check out one of Lima’s many chifas, restaurants which date back in some cases to the waves of immigration from mostly southern China of the late 19th and early 20th centuries, mixing local cuisine with exotic flavours from the Middle Kingdom. A great place to start a night out on the town is in the Parque de la Reserva, an eight-hectare (20-acre) downtown park with the worlds largest complex of fountains – symphony of water, classical music, movement, and colour. And while Lima nightlife offers the entire gamut, from cocktail bars to big boom-boom discos, you’ll want to spare at least a night or two for the typical creole peñas, the music clubs where local limeños mix with expats and visitors drinking the national tipple pisco and dancing the waltz, tondero, zamacueca, landó and cumbia.