Pretty much everyone is familiar with the markings painted on roadways all across the world to direct traffic. And if you’ve seen an airport runway, you’ve probably noticed it has its own set of directions, usually painted in white, sometimes in yellow. Some may be more obvious, others puzzling to the uninitiated. Well, let’s initiate you a bit!

These represent the magnetic bearing of a runway (i.e., the runway’s orientation with respect to magnetic north) and are designated by two digits. Why two, if the degrees marking the heading can range from 0 to 360? Because the third digit is eliminated. If, for example, the runway heading is 250°, it would be indicated by the digits 25. And if the magnetic heading is 251°, it would also be designated by the digits 25 (rounded to the nearest digit).

If there are two parallel runways, i.e., they have exactly the same magnetic orientation, a letter is added to the two digits so as not to confuse pilots: L (left) or R (right). If there are three (more than three is rare), the centre would be indicated by a C (centre).

This dotted line is used to mark, as the name suggests, the centre of the runway, so that the crew can align the aircraft. Each line fragment is typically 30 metres (98 feet) long and the spacing between them is 20m (66 ft., as specified by the regulations of the International Civil Aviation Organisation, aka the ICAO).

These are several wide stripes, running parallel to the runway centre line and resembling a zebra crossing, serve to identify the threshold, i.e., the start of the runway available for landing. Symmetrical and located on both sides of the runway, the number of stripes will depend on the runway’s width.

Represented by two large rectangles on either side of the runway, these are used as reference points for aircraft during approach and landing manoeuvres. These runway markings are different depending on the distance between thresholds. That is, the shorter the runway the closer the aiming point markings are to the runway threshold markings.

Also known as TDZ markings, they demarcate the area of the runway where the aircraft first makes contact with the ground, and are again located on both sides of the runway. They’re similar to the runway threshold stripes (although shorter), of an indeterminate number (depending on the configuration) and indicate to the pilot the remaining distance to the opposite threshold. The number of TDZ markings will again depend on the length of the runway, but as a guide, the distance between one marking and the next is 150m (492 ft.). The aiming point markings fall in between these.

These delimit the area where it’s is possible to operate, represented by continuous lines, one on each side of the runway. They’re are particularly important because they stand out chromatically against the surroundings, so you can tell at a glance where the boundaries are when landing. 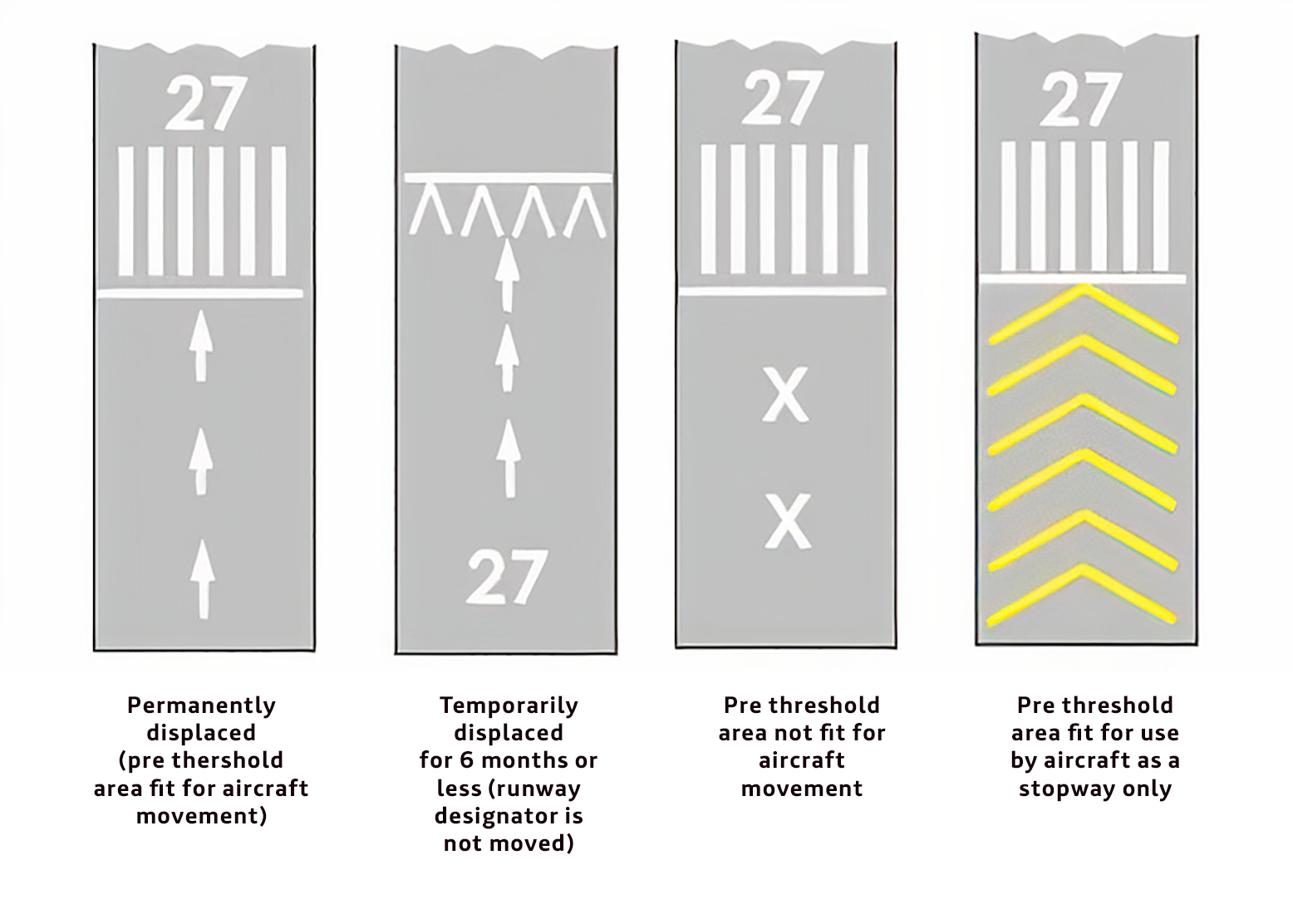 Other Types of Runway Markings

Before the threshold there are other pre-threshold runway markings which are also important:

There are two types of markings: those which are temporarily displaced, and those which are permanently displaced. They indicate the area that must not be used for landing, although it may be used for other manoeuvres such as take-off or taxiing. They are represented by arrows and are located in the referred area and in the centre of the runway.

If there’s an area before the threshold that is not suitable for aircraft (neither for landing nor for other manoeuvres), chevron markings are used, which are a kind of very open, yellow arrowhead pointing in the direction of the runway.

Areas where aircraft may not transit are marked with large white X’s.

OK avgeeks, now try putting your new knowledge to work the next time you fly!