At some point when you’re approaching your plane you’ve surely wondered to yourself why the wings are curved, no? This design feature is called a winglet (also known as a wingtip device), and it’s there not just to look cool but for an important purpose: to maximise aerodynamic efficiency. Interested in learning more? Read on!

If you’re an aviation geek, you know that airplanes stay in the air thanks to the interaction of four types of physical phenomena:

Weight – that related to the force generated by gravity

Lift – the upward force that the aircraft maintains (lift)

And it’s with this last one, aerodynamic drag or resistance, that winglets take center stage, especially. Their main objective is always be to reduce the aerodynamic drag of the aircraft, allowing a more gradual contact of both air masses. You will notice that these devices are organic in  inspiration, similar to the wings of birds – even letting the feathers appear at the ends when they need it. And as with birds, aircraft are able to move due to the pressure difference between the upper part of the wing (the upper surface) and its lower part (the lower surface).

This is the key point when it comes to winglets’ function. Airflow from high pressure areas will always be directed to low pressure areas, and this difference in air masses can generate small eddies at the tips of the wings which are known as vortexes. And the difference in pressure between the lower part of the wing and the upper part causes increased drag and less lift, which leads to lower efficiency – and therefore increased fuel consumption.

Installing winglets counters this, weakening the force of the vortexes and reducing the flow of air that is mixed by the pressure difference, achieving energy efficiency and reducing aerodynamic resistance.

In 2013, manufacturer Airbus launched new wings called sharklets (meaning little shark fins) on its A320 family models, considerably improving the performance of the aircraft. Since then, Iberia has integrated sharklets into its fleet on models such as the A321, A320, A319, and A350 (with this new model, they allowed the evolution of the winglets to address three key points: greater aerodynamic, energy, and ecological efficiency).

These devices serve to elongate the tip of the aircraft from the vertical axis by around 2.5 metres (just over eight feet) and reduce the aircraft’s aerodynamic drag by around 6 percent. With less dynamic resistance, the engines need less thrust to overcome it and thus achieve a direct saving in fuel consumption – estimated between 3 and 4 percent depending on the route distance. So as engines require less thrust and consume less fuel, they also emit less CO₂ into the atmosphere – estimated that around 900 tonnes less per aircraft per year.

And the benefits of this state-of-the-art design do not end here; the aircraft can also fly higher, approximately 39,000 feet. It can take off with a lower thrust or with a greater takeoff weight, in addition to being extended the flight hours of its service life. 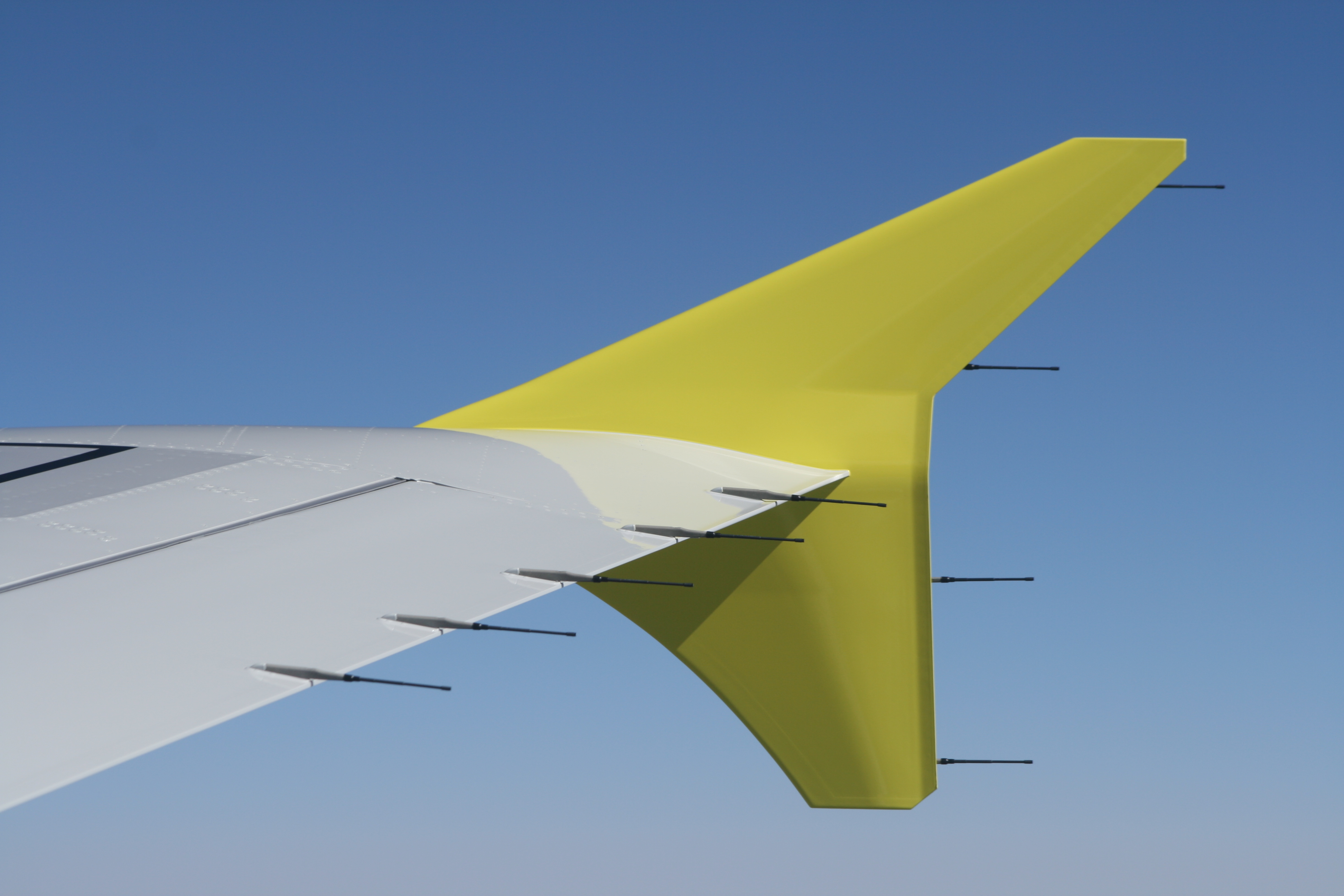 Other Types of Winglets

Though winglets and sharklets are the best known of these structures, over the decades the aeronautics industry has developed a number of additional variations, including:

These are mini-wings – essentially, short wedges – with an upward slope that were once found on Airbus A330 and A340 aircraft as well as on the Boeing 747. These days, however, they’re a rarity.

Seen on many Boeing 737NG models, these combo winglets feature a smoother transition from wing to fin, as if it were an extension of the wing.

Also found in the Boeing 737NG family (specifically the Boeing 737 MAX), this variation fine-tunes the blended winglet by adding a downward-pointing fin, providing a reduction in drag and a range increase corresponding to 2 percent or more for long-range emissions.

These are the fins used on some Airbus models, such as the A330 and A340 or the A350 family and A320neo. Their surfaces extend both above and below the wing (as the name suggests), forming a wingtip “barrier” to prevent higher-pressure airflow from leaking to underneath the wing. In the case of Iberia, you could find old or traditional tips in A32X models that formerly used this type of device.