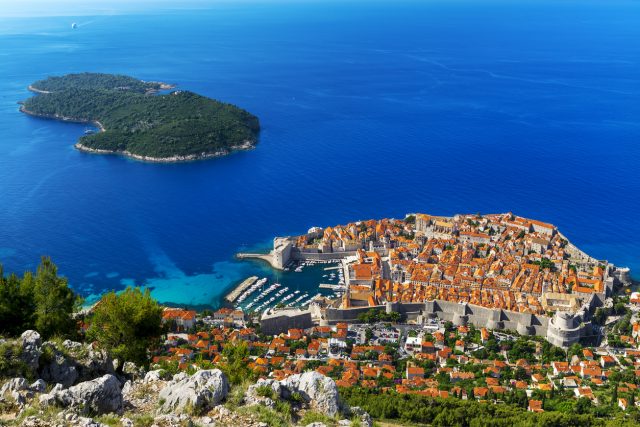 Astride the intense blue waters of the Adriatic Sea, Dubrovnik remains the uncontested reigning queen of Croatia‘s Dalmatian Coast. Its doughty walls encircle a cobblestone-paved, red-tile roofed old town dating back to the 11th century and declared a UNESCO World Heritage Site.  Here’s a quick rundown of what makes the “Pearl of the Adriatic” such a delight for visitors.

Reachable from Croatian capital Zagreb via 6½-hour drive or two-hour flight; three hours by road from another splendid Dalmatian city Split; and by a 50-minute direct flight from Madrid, this medieval fantasy feels like a film set – indeed, it was used as such for the likes of Star Wars Episode Eight: The Last Jedi and Game of Thrones, in which the city played King’s Landing. Having survived earthquakes and wars (including the Balkan war of the 1990s), its magical old town – once the merchantile republic of Ragusa, a rival to Venice and Genoa – has been restored and is one of Europe‘s most magnetic destinations. 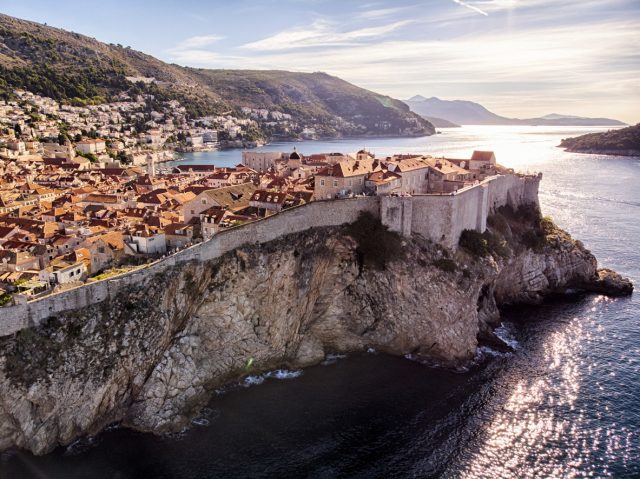 Its palaces, churches, monasteries and public spaces including plazas and fountains are of course magnificent, ranging from Gothic to Baroque, but what’s especially iconic is the nearly two kilometres (about a mile and a quarter) of walls surrounding them. Built mostly in the 14th and 15th centuries, they rise up to 25 metres (82 feet) high and include 17 towers, 120 cannons, and a variety of fortifications (one of which is the oldest preserved fort of its kind in Europe). Visitors can stroll them to take in breaktaking views over the city and sea, with three access points.

Following are some of Dubrovnik’s top landmarks: 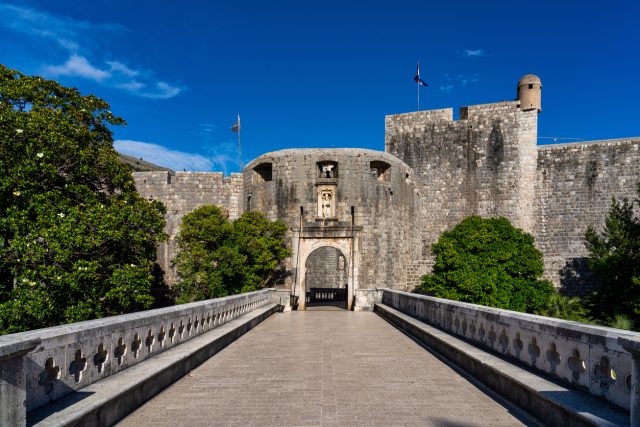 Built in 1537, the main entrance into the old town is on its west side, accessed via a stone bridge over the moat (now a grassy garden area) that runs around the walls. You then pass through the Renaissance archway, marked by a statue of St. Vlaho, Dubrovnik’s patron saint, to emerge onto the Stradun, the old quarter’s main thoroughfare. (Incidentally the gate makes at least two appearances in GoT.)

On the eastern side, the Ploče Gate was built a year later than Pile and was designed by the same architect, so is very similar. Meanwhile, the northern Buža Gate looks of similar vintage but is in fact far more recent (built in 1908) as well as a bit less imposing – though the view of the city from its steep steps is worth catching. 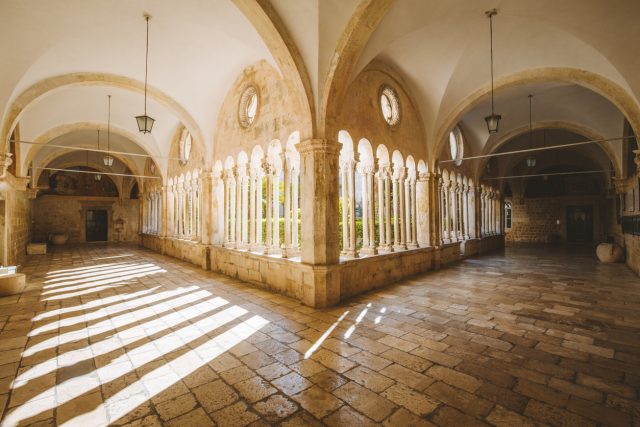 
Just to the left as you pass through the Pile Gate, this monastery dates back to 1317 and is a true gem of the city, with highlights including a fine Gothic portal and lovely late-Romanesque cloister (above); a library pack with artwork and more than 70,000 historical tomes; and especially notably the world’s third oldest still functioning pharmacy. 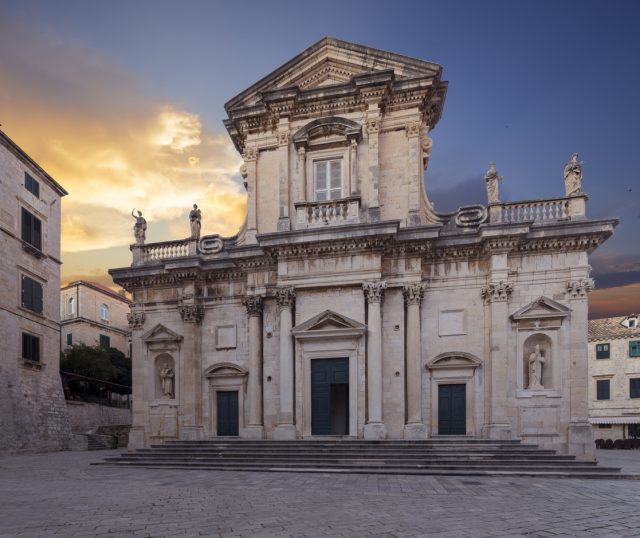 Cathedral of the Assumption

Built over three decades in the late 17th century, the Baroque Katedrala Velike Gospe has several exquisite altars, and behind the main one you’ll find The Assumption of the Virgen, a polyptych by the great 16th-century Venetian painter Titian.  Another highlight here is the cathedral treasury, packed with gold, silver, and precious gems, and featuring some relics of Dubrovnik’s patron saint Vlaho. 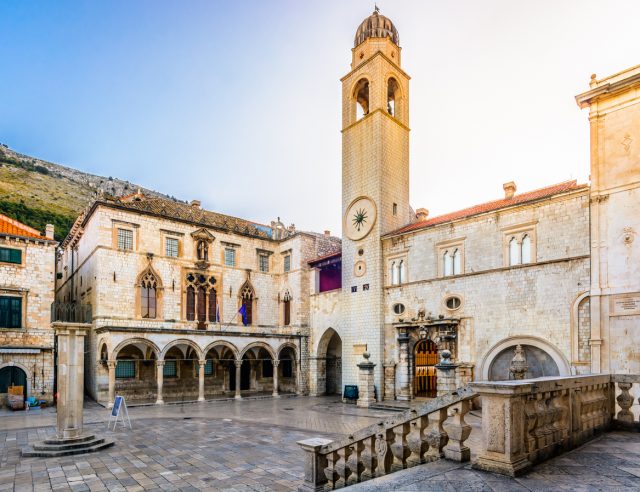 Also known as the Divona, this early 16th century mix of late Gothic and Renaissance was one of the only buildings that survived the great earthquake of 1667, and was built not as an aristocratic residence but as a public building, serving variously as a customs house, mint, armoury, bank, and cultural academy.  These days it’s home to the city’s historical archives (with some of its contents displayed for visitors on the ground floor), its atrium houses an art gallery, and there’s a room full of photos memorialising the young men who died defending the city in the Balkan war of the 1990s. 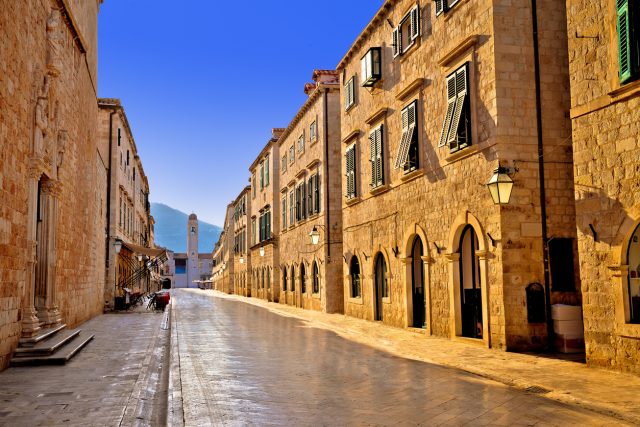 Also known as Plaka, this polished-limestone pedestrian avenue runs some 300 metres (984 feet) through the heart of old Dubrovnik, from Pile to Ploče Gate, and a number of the city’s historical landmarks can be found along its length, along with various restaurants and shops housed in uniformly built Baroque buildings. In your explorations of the city you’ll end up on the Stradun time and time again, but don’t miss a chance to see it at night, when it’s especially with the lights gleaming on the polished limestone. 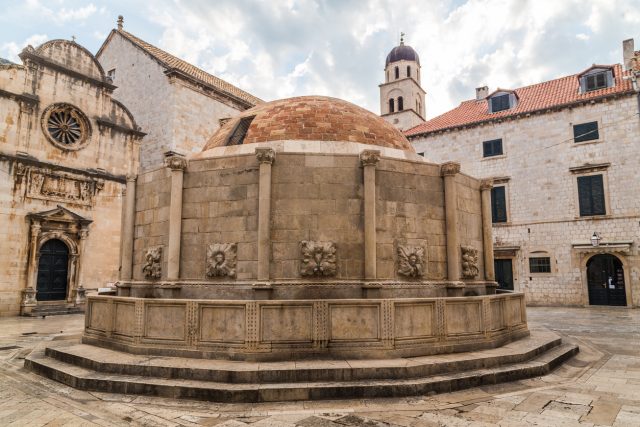 
At either end of the Stradun, a pair of stone cisterns to store water piped by aqueduct from area springs were built in the 1440s. Named after their principal architect and unusual because of their round shape and domes, the Big Onofrio Fountain is located next to the Sponza Palace and the Little Onofrio Fountain is at the opposite end, on Luža Square. They’re a popular meeting point and resting area (lined with stone benches), as well as distinctive icons of Dubrovnik. 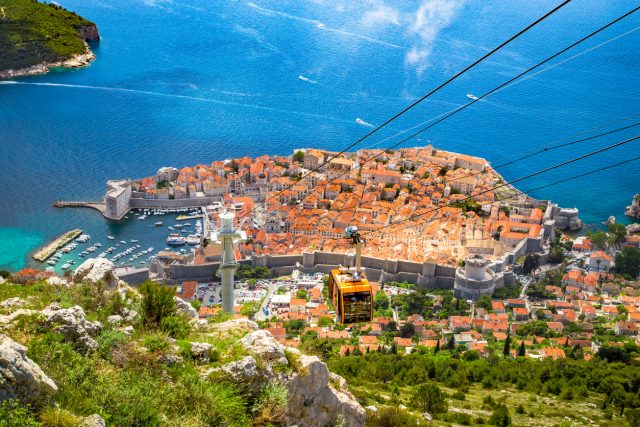 
Looming behind Dubrovnik, this fairly modest mountain (just 412m/1,352 ft. high) provides perhaps the most sweeping view available over the old quarter and nearby Dalmatian coast. You can reach it by driving (or taxi, about 15 minutes), three-minute cable car, or if you’re feeling up to it, a walk of a half hour to an hour, depending on your spryness. Once up here, have a look at the war museum in 19th-century Fort Imperial or have lunch at the restaurant – or perhaps save your visit for a front-row seat to a spectacular Adriatic sunset!

So hop a flight to Dubrovnik and play your own unforgettable (and less traumatic lol) game of thrones!