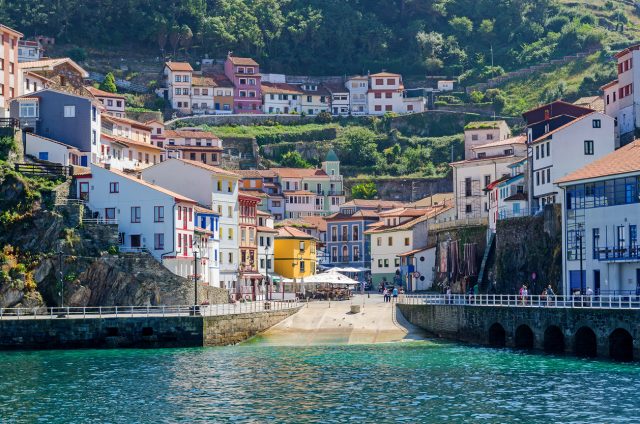 The picturesque Cantabrian Sea towns and villages of Asturias in northern Spain, where the annual fishing season is now getting underway, are a key component of the appeal for visitors of a region whose tourism authorities have justifiably long promoted with the slogan “Nature Paradise”. So today come along with me to discover a quintet of Asturias’ most charming coastal towns – many of which have earned places on the lists of Spain’s prettiest villages, and all an easy drive from capital Oviedo and largest city Gijón – from east to west: 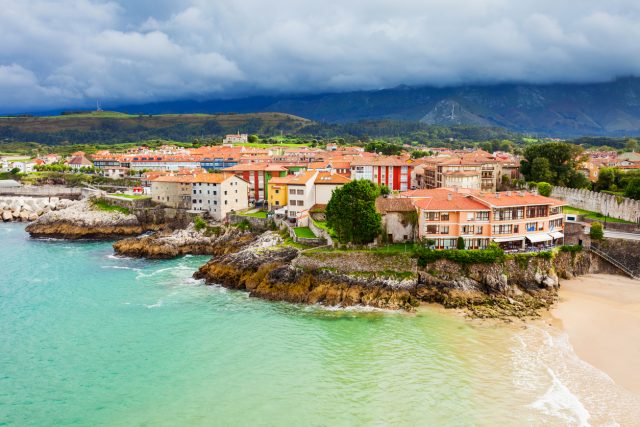 Llanes: The Town with the Most Beaches

A stop on the “primitive” route of the Way of St. James, Llanes’ historic core – one of the best preserved in Asturias – is a collection of stately manor houses protected by a medieval wall, some 300 metres (984 feet) of which can still be seen in quite good condition. Top landmarks not to miss include the 15th-century Gothic Basílica de Santa María and the “Cubes of Memory” in the port, a rompeolas created by Basque artist Agustín Ibarrola,  which aims to capture the local way of life through an interplay of colours and symmetrical shapes.

The town is also home to some 30 beaches along 35 kilometres (22 miles) of coast, part of a protected landscape called the Costa Verde Asturiana, (Asturian Green Coast). The in-town Playa del Sablón is probably the best known because of its seaside promenade and proximity to the Torreón de Llanes., the 13th-century defensive tower that’s part of the medieval wall. It’s a lovely landscape set off by the imposing Picos de Europa mountains looming in the distance.

Ribadesella: Canoes & Seascapes Next Door to a World Heritage Site

This town of just under 6,000 is one of the best known of these towns thanks to the International Descent of the Sella, the river which reaches the Cantabrian Sea here. It’s a canoeing contest held annually at the beginning of August and it’s a fun, joyous celebration of nature, sport, and competition that draws participants and onlookers from all over Europe and beyond.

In Ribadesella’s old town you’ll find a number of old palazzi, manor houses, and arquitecture distinctive to Asturian coastal villages. Take a stroll along promenades like the Paseo del Muelle, the Paseo de la Grúa, and the Paseo de los Vencedores del Sella. to get a good look at a lot of this, and drive up Monte Corberu to visit the 16th-century Guía Hermitage (also a stop along the Way of St. James) and take in the impressive views out over the town and coast.

What’s more, just outside town is a UNESCO World Heritage Site that’s also Spain’s second most important cave filled with prehistoric art (after Altamira in neighbouring Cantabria), as well as one of the top examples of its kind in the entire world. The Cueva de Tito Bustillo, is home to around a hundred paintings and etchings, some dating back as far as 33,000 BCE, and there’s an excellent interpretation centre housing plenty of interactive exhibits. 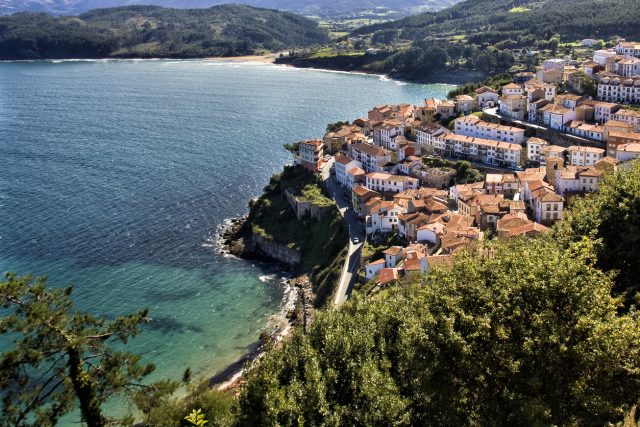 With fewer than 2,000 residents, this sardine-fishing village enjoys a singular setting among green seaside hills, its whitewashed houses arranged on different tiers with lots of picturesque nooks and crannies to explore. This beauty, along with its respect for age-old traditions and association with the fishermen’s brotherhoods led to it being named an “Exemplary Town of Asturias” a few years ago.

A top spot not to miss is the San Roque Overlook (above), offering spectacular panorama over the village and coast, and alongside it the mid-18th-century Chapel of San Roque one of Lastres’ two most visited churches (the other being  Santa María de Sábada , also built in the mid-18th century and Baroque/Neoclassical in style. On the architectural front, you’ll also want to see the Torre del Reloj (Clock Tower, originally built as a watchtower in the 15th century) and a series of waterfront manses. 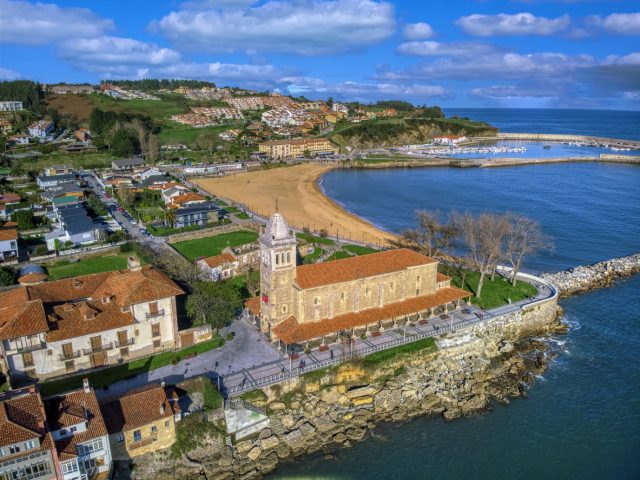 Luanco: The Very Model of an Asturian Fishing Village

With just under 6,000 souls, Luanco is an under-the-radar gem that shouldn’t be missed when exploring the coastal towns of Asturias. It sports a nice old quarter boasting a number of fine manses – many dating back to the 18th century, such as the Baroque Palacio Menéndez de Pola – as well as others built in Modernista (Art Nouveau) style in the late 19th and early 20th centuries. Other landmarks include the whitewashed, 18th-century Torre del Reloj (Clock Tower) and the Church of Santa María, but an absolute must is a stroll along the Paseo Marítimo, including a visit to the wharf and maybe a dip on the majestic local beaches, Playa de la Ribera and Playa de Santa Marina.

Another major attraction here circles back to Luanco’s deep-seated heritage of the sea: the 73-year-old Maritime Museum of Asturias, which provides visitors with a deep dive into the subject, covering the evolution of navigation techniques and a wide collection of fishing gear and exibitions laying out the different types of boats typical of the region. 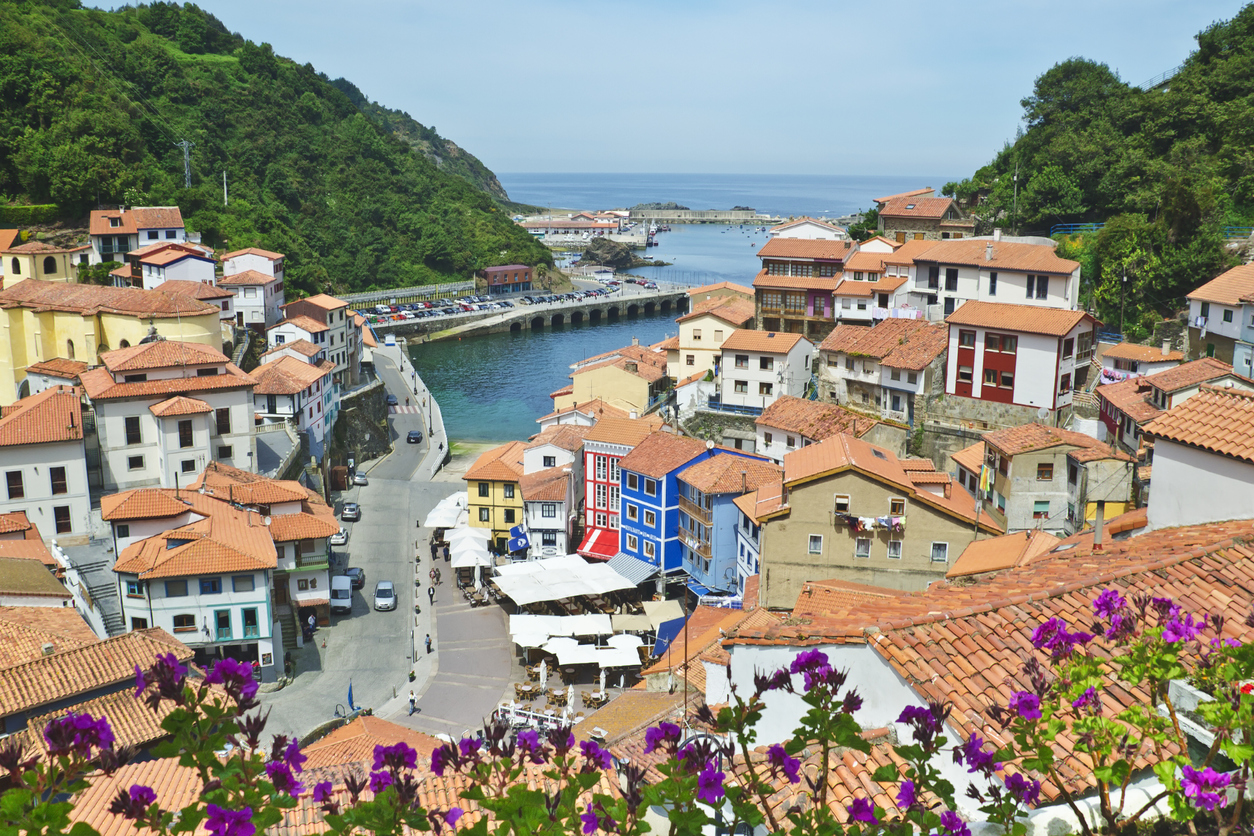 Cudillero: Who’s the Fairest of Them All?

Perhaps the most famed – and widely considered the prettiest – of all these fishing towns (above and top) –  is out on the western coast, and owes its notoriety especially to its dramatic setting amidst a trio of verdant hills, with multicolour houses of various size dubbed “the amphitheatre” because of the way they spill down the steep slopes in a semicircle around the bay.

Called Cuideiru in the distinctive local tongue of Asturias, this town of just over 5,000 doesn’t have any “sights” or attractions per se beyond the sheer atmosphere of the place (unless maybe you count its lighthouse and local churches, San Pedro and San Martín de Luiña); it’s also a treat to watch the fishermen bring in their day’s catch down at the docks between 5 and 8 pm. And down near those docks, Plaza de la Marina is lined with various restaurants specialising in fresh seafood and typical Asturian sidra (cider, usually of the dry and not sweet variety).

Right near town there are a number of hiking opportunities along the Ruta de los Miradores (Overlooks Route). It’s made up of a trio of itineraries that include city streets as well as clifftop paths – keep in mind that it does require a bit of climbing of hills, but the effort is well worth it for the views. My favourite is the Mirador de la Atalaya, from which the sweeping panoramas are spectacular. There are also a couple of lovely beaches nearby, Playa de Aguilar and especially Playa del Silencio (but get ready for some chilly water!).

(And just a word to the wise: Cudillero is tremendously popular with Asturians for weekend outings and lunches at its seafood restaurant, so expect tables and parking to be in short supply – and consider visiting on a weekday instead.)

Check out more information about this lovely coast and its villages and towns at the Asturias tourism office’s web site, and for great flight deals, click here.