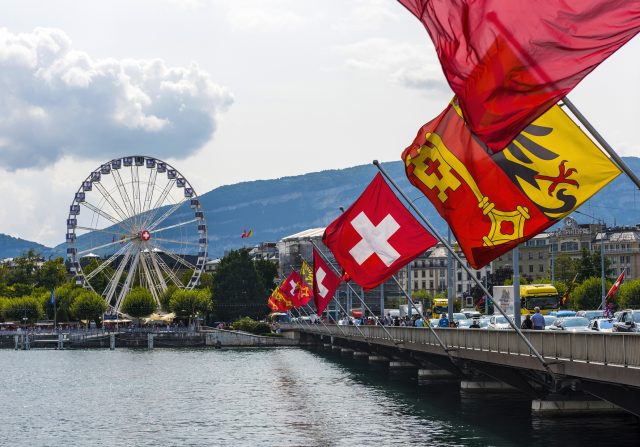 Over the years, this blog has amply covered the diverse menu of year-round travel delights offered by this enchanting Alpine country, accessed through the three gateways Iberia serves here: Basel, Geneva, and Zurich. And today it’s Geneva we’re revisiting, because it’s here in the capital of French Switzerland (and the country’s largest metro area overall) that the arrival of spring brings a colourful blossoming like no other other Swiss city, especially in its green spaces. 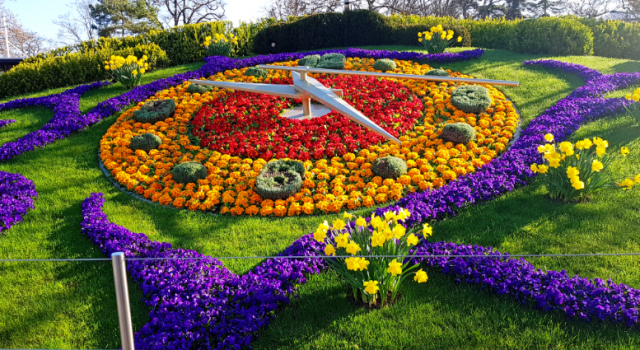 Sitting (& Strolling) in an English Garden Waiting for the Sun


There are few Geneva spots as beloved – and iconic – as much as the Jardin Anglais, built in 1854 along the shores of Lake Leman across from the city’s also iconic Jet d’Eau, the fountain that spouts from the lake surface 140 metres (460 feet) into the air. Lending a bit of colour to the harbour area, the garden is an ideal spot to enjoy a bit of nature right in the middle of the city’s old quarter. The six-hectare (nearly 15-acre) spread features a large and very well kept array of flowers and trees (including several more than a century old) interspersed with fountains, fine statuary, and pathways. Perhaps its most celebrated feature, though, is the work of living art known as the L’Horloge Fleurie, a massive clock made up of more than 6,000 flowers that are changed according to the season; a second-hand that at 2.5m (just over eight ft.) is the world’s largest; and operates with Swiss precision, directed by satellite signal. 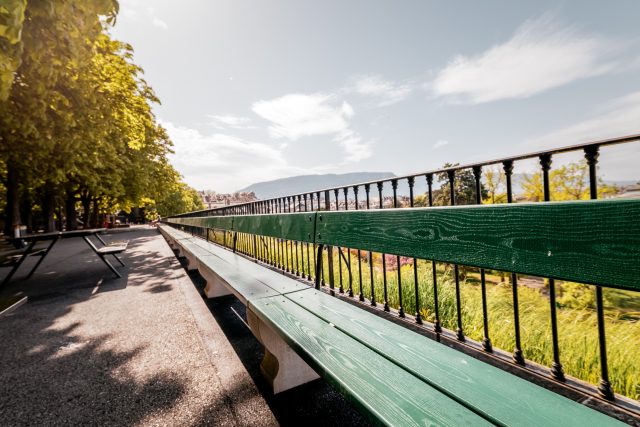 Not far above Lake Leman, ensconced on the ramparts of the old quarter, the Promenade de la Treille is shaded by chestnut trees (the budding of one of which, the marronnier oficiel, have for more than 200 years marked the start of spring in Geneva) and offers some of the best views out over the lake, city (with the Place de la Neuve and the Parc des Bastions front and centre), and out to the lovely Mount Salève in the distance. Perhaps its most celebrated feature, however, is the bench running along it – simple and green, but notable as the longest wooden bench in the world (above), built in the 18th century and more than 120m (394 ft.). A truly gorgeous and peaceful spot to spend part of a lovely spring day. 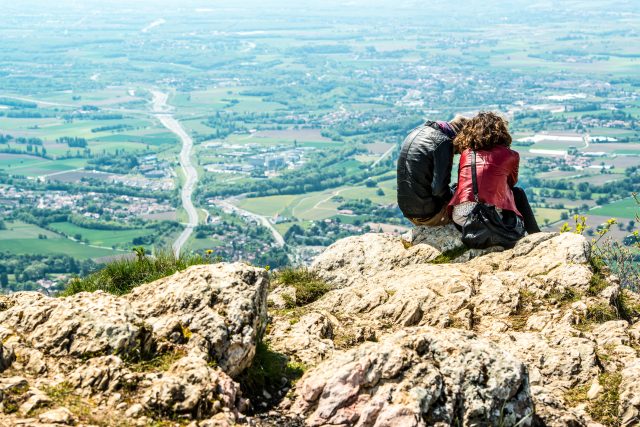 Speaking of Salève, looming over Geneva in the distance, this 1,379m (4,524-ft.) peak that’s part of the French Prealps is very much worth a day trip. Just a half hour’s drive from the city (you can get there on a No. 8 municipal bus), it’s a favourite getaway for genevois looking for a little bit of easily accessible nature along with adventure including hiking, mountain biking, rock climbing, and paragliding (you can book a tandem flight with the paragliding school up here); it’s also a popular area in winter for cross-country skiing.

And apart from being an easy ride from town, getting up to the peak is also a doddle thanks to a télépherique (cable car) – just a five-minute ride. At the top you’ll a restaurant,  a viewing platform offering spectacular vistas over the city, Lake Leman, and surrounding mountains all the way out to Mont-Blanc – along with another curious attraction: an 11-year-old Buddhist monastery and temple inaugurated by the Dalai Lama and open to visitors. 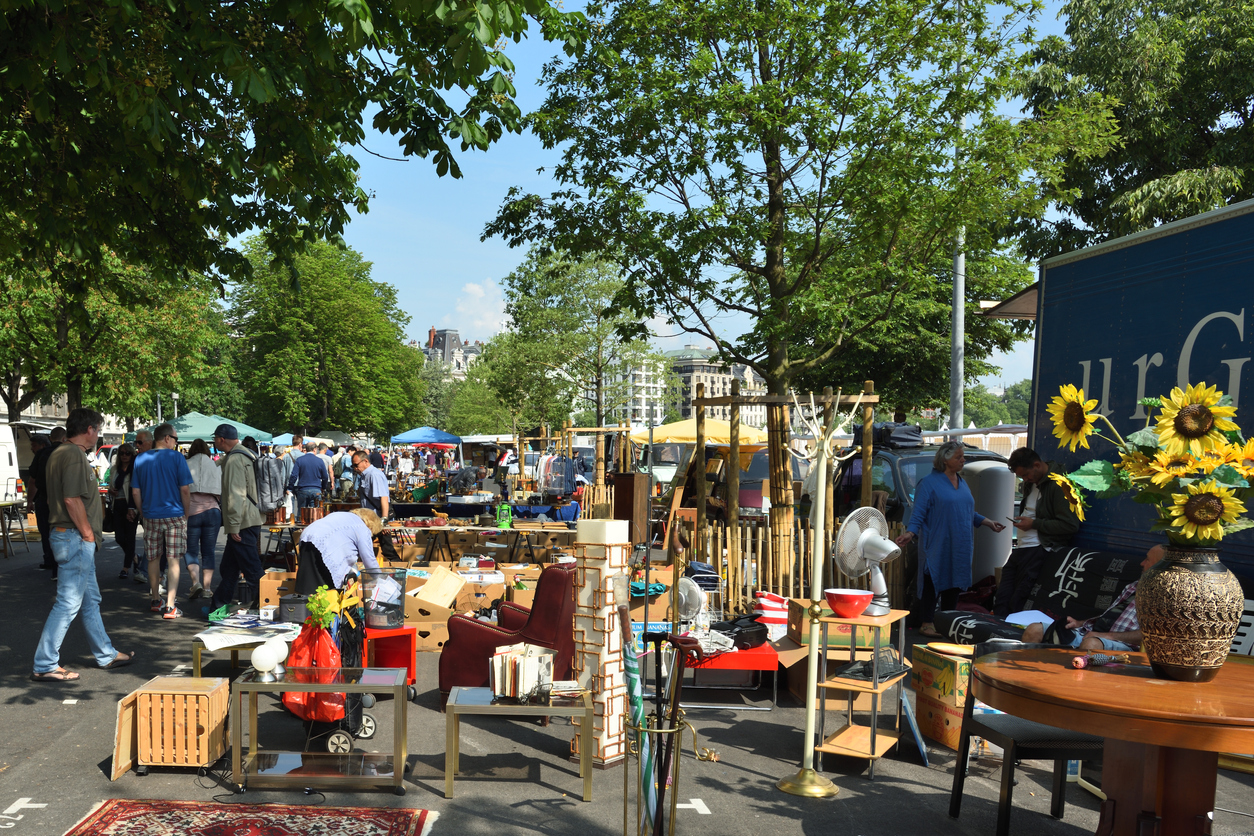 Just a hop, skip, and a jump from the Promenade de la Treille in the Plainpalais neighbourhood, the expansive local square is home to a farmers market on Tuedays, Fridays, and especially Sundays, and on Wednesdays and Saturdays one of Switzerland’s biggest marchés aux puces (flea markets), still going strong after 31 years. Open from 6:30 am to 6:30 pm, it’s quite the trove of bric-à-brac, books, clothes, jewellery, antiques, handicrafts, and decorative items. The surrounding streets are also a big centre for pubs, restaurants, and nightlife.

Finally, a Couple of Cool Museums

This city is packed with more than 30 interesting museums and galleries, but a pair of particular interest near the Plainpalais market include the Musée d’Ethnographie de Genève, founded in 1901, reinaugurated in modern quarters in 2014, and showcasing the cultures of Switzerland and the entire world through multimedia exhibitions and some 80,000 artifacts. The other is the Musée Patek Philippe, whose more than 2,000 exhibits trace and explain the history of watchmaking in Geneva and beyond, and considered the most complete museum of its type in the world.