Attention, thermal-spa lovers! There’s plenty to float your boat in Spain – and in fact one of Europe’s most prolific yet lesser known destinations for getting a nice hot soak amidst historic surroundings. Up in Galicia, the country’s green northwest corner, the city of Ourense (pop. 105,000) dates its origins some 2,000 years back to ancient Rome‘s colonisation of the Iberian Peninsula – and has the ruins to prove it, along with a picturesque medieval old quarter; romantic parks; and outstanding regional cuisine.

Located 40 minues by train and an hour by road southeast of Galicia’s capital (and air gateway) Santiago de Compostela, Ourense’s main claim to fame even back when it was Roman Auria, was its more than 70 hot springs, emitting more than three million litres (just under 793,000 gallons) per day, one of the highest in Europe and outdone only by Budapest. And even today, its menu of thermal springs offers lots of choices for those seeking mineral water soaks: Lounge in free public hot-springs pools or revitalize in showier, spa-like private pools. There’s something for every budget, so you can book a stay at one of the upmarket spa hotels or go for more affordable accommodation and bask in several of the day spas.

More than a decade ago, Ourense became one of the six founders of the European Historic Thermal Towns Association. And one of the things that make it stand out from others in this organisation is that nature surrounds many of the city’s mineral springs. For instance, you can stroll through a landscaped spa park fed by natural hot springs – ranging from 41° to 72° Celsius (106°-162° Fahrenheit) – and without paying an admittance fee.

Follow the relatively undiscovered Miño Thermal Route, a five-kilometre (three-mile) path which follows the Miño River through various therapeutic landscapes including natural pools of geothermally heated water, fountains, and two Japanese-inspired spas – although one of these is currently closed and the other, Outariz Thermal Station (top), visitable by appointment only during this time of coronavirus. Reserve a spot in Outariz’s traditional Japanese baths or in the stone baths inspired by the Iberian and Celtic peoples who settled the area even before the arrival of the Romans. This affordable retreat overlooking the Miño is a perfect place to relax outdoors in a safe environment. The thermal river walk can be reached by bus or the Tren de las Termas, a tourist train that connects it with the historic old town. 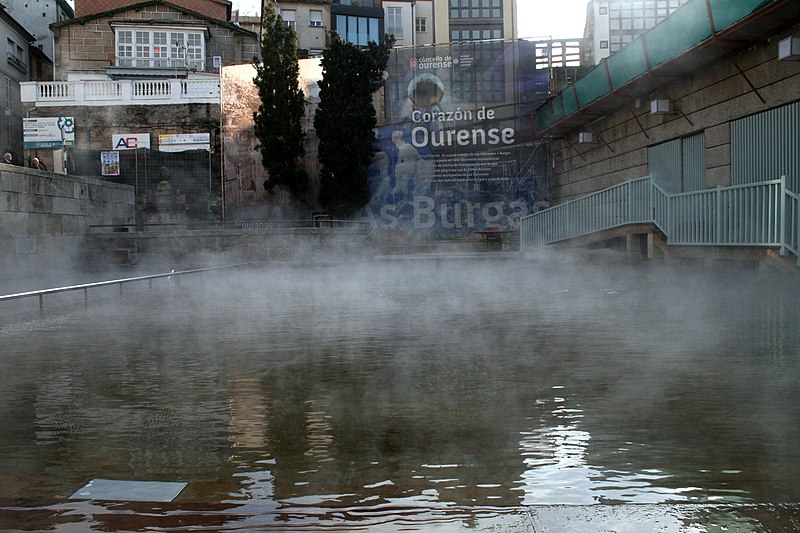 Ourense’s oldest hot-springs baths, however – located in the middle of the old town and founded during the original Roman settlement – are As Burgas (above), a pair of thermal pools with water up to 60° C (140° F), free of charge and including changing rooms and lockers. Right alongside are the remains of the original bathing complex dating back to the 1st century CE as well as an interpretation centre which ably lays out the history and features of that complex along with the thelassic culture of the ancient Romans. (Sadly, though, As Burgas is also closed at the moment due to the pandemic.)

Ancient temples are often located close to water sources, and archaeologists have discovered such sacred places at As Burgas. Devotees thought to be of Celtic origin paid homage to their god of the springs Revve Anabaraego in the first century CE, and later the Romans later built an altar to worship the water nymphs believed to inhabit them.

Later still, during the Middle Ages, Christina pilgrims on the Way of St. James to Santiago de Compostela took respite in the waters of As Burgas, stopping at the sanctuary pool to wash and heal their wounds. In fact, the local pilgrimage hub, the Catedral de San Martiño, is only a five-minute walk from here (more about that below). 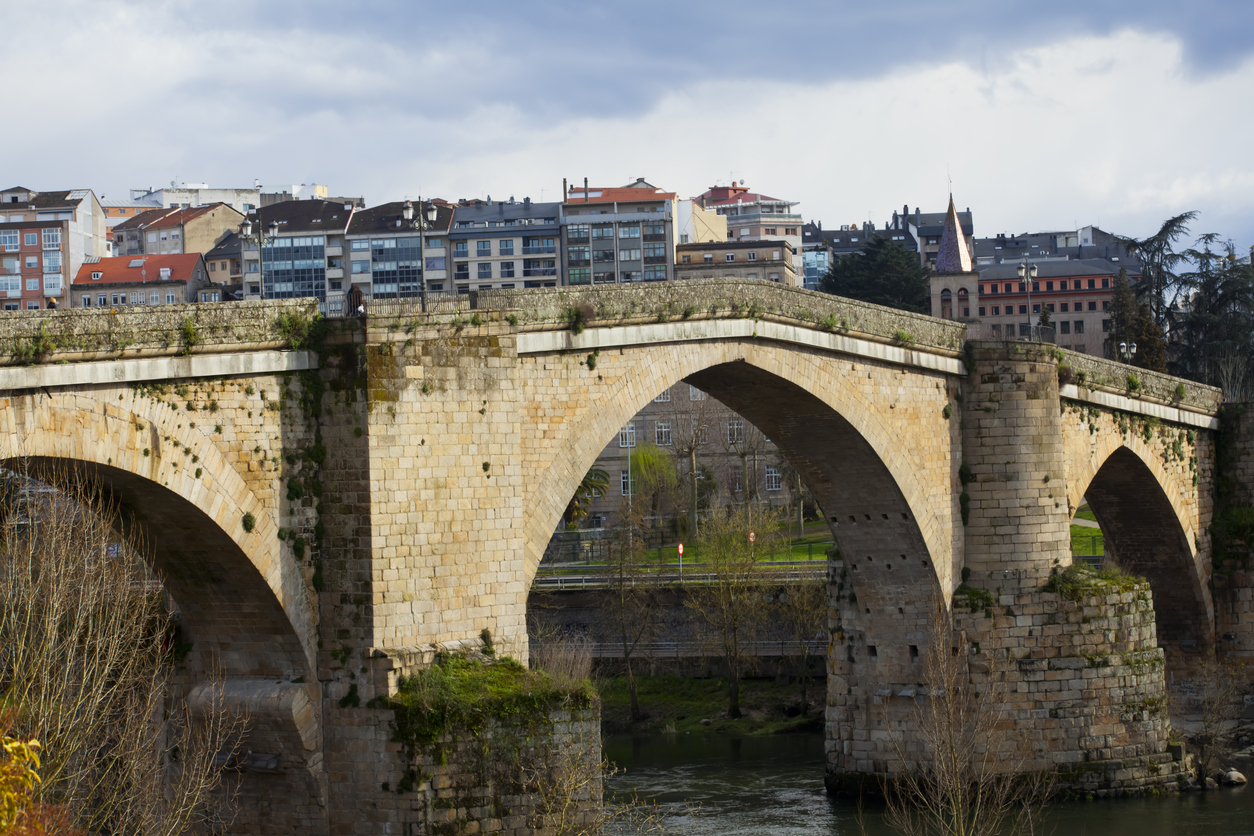 Besides loads of outdoor thermal pools, there are plenty of other things to see and do in Ourense. Stroll across the pedestrian-only Ponte Romana (above, also known as the Ponte Vella), rebuilt on Roman foundations in the 13th century, and you might run into pilgrims, who cross this bridge on the Mozarabic Way of St. James/Silver Route originating in Seville.

In the old town, centred on the main square, the Praza Maior with its sloped pavement and historic, arcade-lined buildings, head over to the Praza do Trigo to visit the aforementioned Cathedral of San Martiño (above, also known simply as Ourense Cathedral), a Romanesque-Gothic affair built mostly in the 12th and 13th centuries. Gaze up at St. James on the central mullion of the Portico of Paradise as pilgrims throughout the ages have done; experts liken this grandiose doorway to the more famous Pórtico da Gloria at the Santiago Cathedral, but the biggest difference here is that its sculpted figures resonate with vivid colors, restored from the original Romanesque polychrome.

Museum enthusiasts will also find a worthy selection here in Ourense, especially when it comes to Galician culture, with examples such as the Museum of Traditional Galician Costumes and the Museo da Cornemusa (Bagpipe Museum), showcasing examples of this singular instrumentt from around the world (why bagpipes? They go way back here, originating with the Celts, who before the Romans settled Galicia as well as neighbouring Asturias, even before they made their way to Ireland and Scotland). 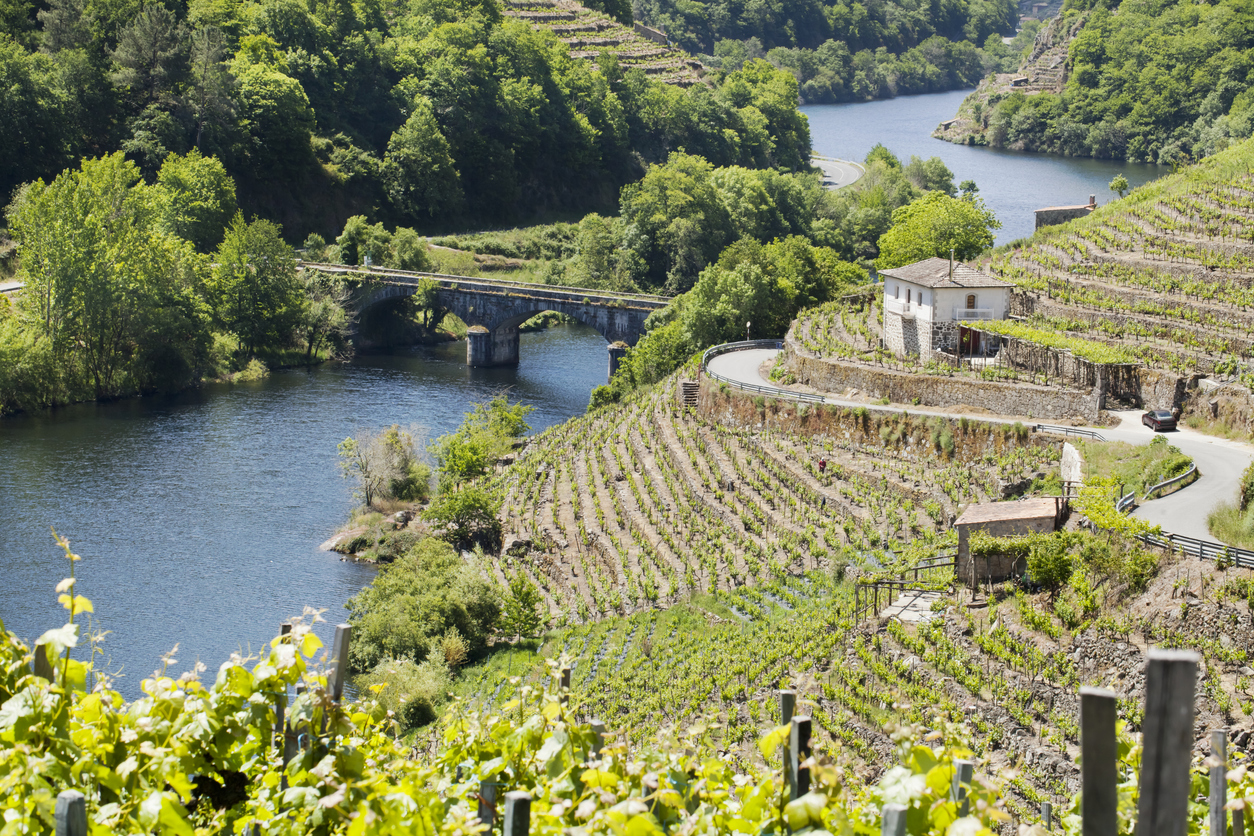 The mountains surrounding the Miño River Valley in which Ourense is located create a “micro-climate” where in the summer it’s drier and hotter than the rest of famously cool, often rainy Galicia (as well as colder in the winter). And of course, geography and climate influence what’s grown hereabouts. For one thing, the valley is optimal for grape growing, and vintners have been producing wine here for centuries; in fact, Ourense province has other river valleys, as well, and four of Galicia’s five wine regions, with the appellations Monterrei, Ribeiro, Ribeira Sacra (above), and Valdeorras. A number of local vineyards host visitors for tours and tastings.

Besides wine, Ourense is home to other products with a denomination of origin (meaning tk). Make sure to try crusty Cea, an artisan wheat bread made from just 18 ovens in the nearby San Cristovo de Cea district; you’ll recognize it by its elongated shape, rounded ends and large diagonal slit on the top.

Taste the Arnoia peppers, originating originating in the town of Arnoia, a half an hour drive from Ourense, on — you guessed it — the Arnoia River. Proving once again that this river valley geography with its sandy/loamy soils is right for uniquely local foods. Growers harvest these peppers unripe to retain their green colour, and you’ll find them roasted or pan fried to bring out their sweet flavour and spicy bite.

Although the Protected Geographical Indication of Galician chestnuts encompasses all of Galicia, they’re a common ingredient in Ourense cuisine when it comes to desserts. What’s more, it turns out that Ourense is one of the leading producers and exporters of marrons glacés (candied chestnuts). 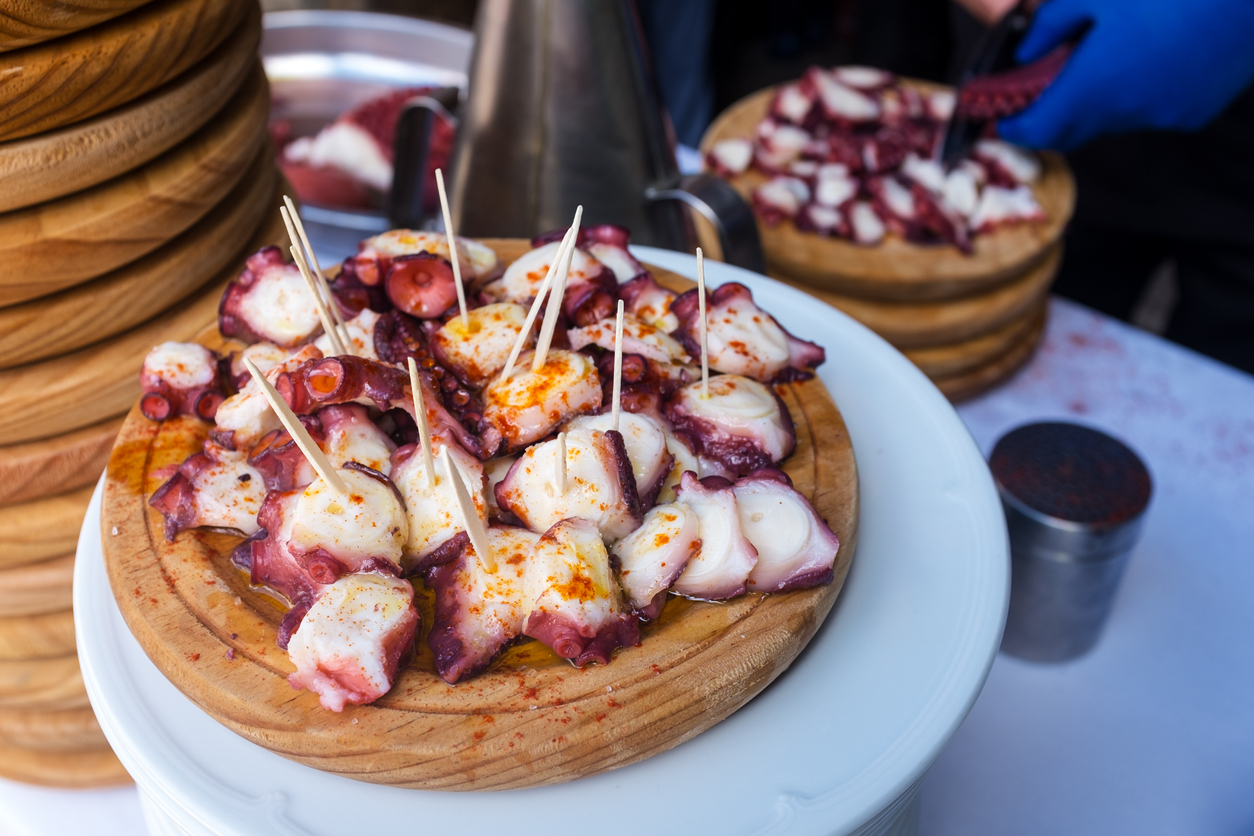 Look for these and other traditional foods at the 96-year-old Praza de Abastos Market next to Alameda Park, where the many butchers, fishmongers, cheesemakers, and florists provide an Instagramf-friendly feast for the eyes and nose.

Another main feature of local cookery is seafood, from the coast an hour away. Especially don’t miss the local take on polbo á feira (octopus chunks, boiled and annointed with both sweet and spicy paprika) at a pulpeira, a restaurant that specialises in these tentacled treats. Find all these and more by hopping among the restaurants and bars of Rúa Lepanto and other streets in Os Viños, Ourense’s most popular tapas district.

Stacey Wittig is the author of three Camino books, including Spiritual and Walking Guide: León to Santiago. Her bylines have appeared at Forbes, The Telegraph, and FWT magazine. Follow her blog UnstoppableStaceyTravel.com to uncover the spiritual side of travel.