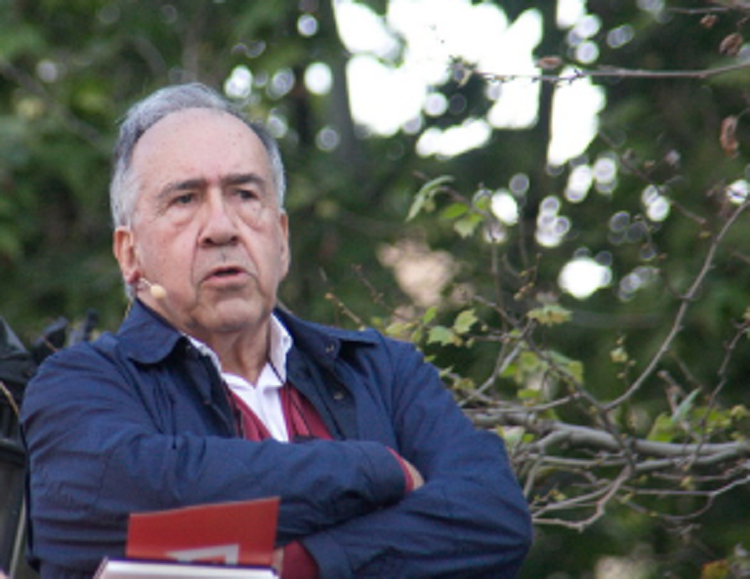 Each year since 1976, Spain‘s Ministry of Culture has awarded this country’s equivalent of the Booker or the Nobel Prize for Literature to one of the world’s most accomplished  living Spanish-language writers. Past laureates have included not just this country’s 20th-century poet Rafael Alberti as well as novelists Camilo José Cela, Miguel Delibes, Juan Goytisolo, and Ana María Matute, but also legendary Latin American luminaries such as Argentine  Jorge Luis Borges; Cuban Alejo Carpentier; Mexicans Carlos Fuentes, Octavio Paz, and Elena Poniatowska; and Peruvian Mario Vargas Llosa. Last year the honour went to Ida Vitale, a Uruguayan poet living in the United States.

Named after the 17th-century novelist considered the most iconic of Spain’s greatest writers – essentially its answer to Shakespeare – the Premio Miguel de Cervantes is presented by the country’s constitutional monarch on the novelist’s birthday, April 23, at the ancient and famed university in his birthplace, the Madrid-Community town of Alcalá de Henares. This year the prize for 2019 was bestowed – although the in-person ceremony was cancelled due to the coronavirus lockdown – upon a distinguished 82-year-old poet from Catalonia.

Joan Margarit i Consarnau (Joan, by the way, is Catalan for John) was born in a village in Lleida province and has for many years has lived in the Barcelona suburb of Sant Just Desvern. Also a notable architect and professor of architecture, he’s published more than two dozen books of verse, most recently, in 2018, Un Hivern Fascinant (A Fascinating Winter). Quite a few of them have been bilingual editions, written in Catalan and self-translated into Spanish, which accounts for his reach and popularity in Spain and the rest of the Hispanic world (not to mention his eligibility for a prize awarded to authors who write in Spanish); some of his work has also been translated into English, including Tugs in the Fog: Selected Poems, Strangely Happy, and Love Is a Place (translated by British poet Anna Crowe, who in 2006 interviewed Margarit in the video below).

Margarit’s style tends toward the realist and sometimes metaphorical, with precise, elegant, yet highly accessible language, and topics and themes ranging from the very personal – the everyday life of the common man – to the abstract; his poems include plenty of autobiograpical aspects as well as homages to Catalonia (particularly Barcelona) both during and after the era of Spain’s Francisco Franco dictatorship (1940-1975). He’s spoken eloquently of the healing powers of poetry as “one of the most convincing instruments we have as human beings to give solace to our sorrows”.

For an example of Margarit’s work, here’s the translation of one poem from Tugs in the Fog, about his disabled daughter Joana, whose death devastated him:

The Eyes in the Rear-View Mirror

We have both grown accustomed, Joana,
for this slowness,
when you lean on your crutches, and climb out of the car,
to start off a sally of car-horns and their abstract abuse.
Your company makes me happy,
and the smile of a body so far
from what was always called beauty,
that tedious beauty, so far-off.
I have exchanged it for the seductiveness
of tenderness that lights up the gap
that reason left in your face.
And, if I look at myself in the rear-view mirror,
I see a pair of eyes I do not easily recognise,
for in them there shines the love left
by looks, and light, the shadow
of everything I have seen,
and the peace your slowness reflects back to me.
So great is their wealth
that the eyes in the rear-view mirror don’t seem to be mine.

Powerful, elegant, and accessible: the essence of Joan Margarit.