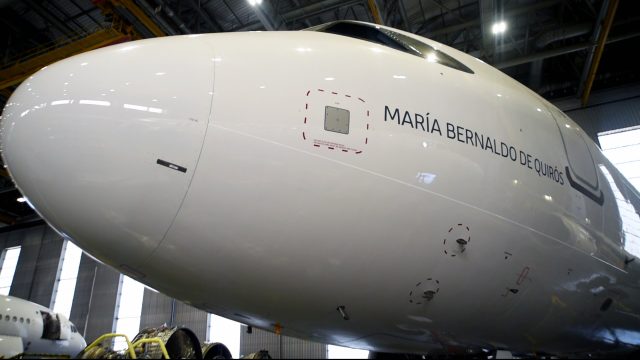 For most airlines, welcoming a new model of aircraft like the Airbus A320neo to its fleet is a pretty big deal. And Iberia has underscored the momentousness of this occasion by naming one of its first batch after a Spanish aviation pioneer: María Bernaldo de Quirós, the very first woman in our country to become an airline pilot. This is a remarkable plane – especially thanks to its efficiency and eco-friendliness, and it’s only appropriate that it carry the name of a truly remarkable Spaniard. Allow me to introduce you to her, if we may.

Born to aristocratic parents in Asturias in 1898, during the early 1920s Bernaldo de Quirós (below) began taking flying lessons at the aerodrome in Getafe, just south of Madrid, and received her pilot’s licence in 1928, at the age of 30, immediately becoming a prominent figure in the nascent field of aviation in Spain. A celebrity, even – making magazine covers as “Miss Golondrina” (golondrina being Spanish for “swallow”, as in the bird); wowing audiences with her expert and acrobatic flying at various air shows; and receiving recognition from the prestigious Royal Aero Club of Spain. 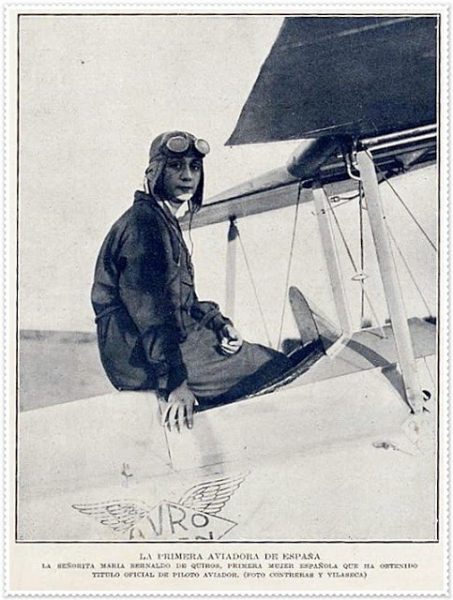 She became part of a heady era in the nascent field of aviation, with the “Roaring 20s”  as well as the 1930s becoming what was dubbed “the Air Age”, seeing rapid advances in technology and aviators becoming stars on the world stage, the likes in the United States of Jimmy Dolittle, Amelia Earhart, and Charles Lindbergh. Meanwhile in Spain, among the marquis names that thrilled the public besides Benaldo de Quirós were the Elcano Squadron, a crew of aviators who gained fame for epic flights to the Philippines and South America.

It goes without saying that despite the many obstacles and prejudices of the day this bold aviatrix (as they called female flyers back in those times) paved the way for other women in aviation, even though the field has remained largely male dominated even to this day. She could not help but be well aware of her pioneer status, of course, and in interviews with the press asserted that she had become “a modern woman”, once commenting that “as public opinion evolves, people will realise that women can do more than just embroider”. Eventually she returned to her native Asturias and became a flight instructor, until with the outbreak of the Spanish Civil War in 1939 she retired from the national aviation scene and led a quiet life until her death in 1983. 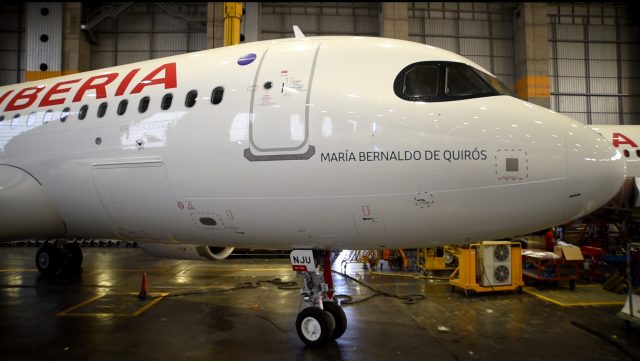 Therefore, it’s more than fitting that we should honour this groundbreaking pilot by baptising one of our also groundbreaking new airliners. The A320neo (the “neo” stands for “new engine option”) is now the most advanced of our short- and medium-range fleet. Its CFM LEAP-1A engines (LEAP standing for “leading edge aviation propulsion”) are not only 50-percent quieter than their predecessors but also emit 5,000 fewer tonnes of carbon dioxide per year as well as half as much nitrogen oxide as previous engines. Thus we’re helping aviation history carry on into the early 21st century as did our countrywoman, the indomitable María Bernaldo de Quirós, nearly a century ago.